The infested flowerbed is now dug up, re dug and re planted. When it came down to it, it turned out that most of the plants survived although there were also some big losses. On the other hand it is not certain that they would have survived for long if they had not been dug up and re planted. The tunnelling system that the voles had created was extensive and there had been a big risk that roots would have died due to hanging in the air. First the plants were dug up and then I walked through and stamped down all the burrows. After that the laborious work of re digging the whole flowerbed started and then finally added chicken and cow manure to get a good start. Some of the plants have had their planting holes lined with chicken wire. Amongst others a few hydrangeas, since hydrangeas were among the plants that the voles seemed to like. In other words I’m testing to see how well it works to protect vulnerable plants that way. A good indicator regarding what they don’t like is simply what they did not touch at all. All of that is now replanted (plants list further down). A new plant that has been added is an elder ‘ black lace’. Since it is a bush with edible parts (that they seem to like) the planting hole has been lined with chicken wire to be on the safe side. 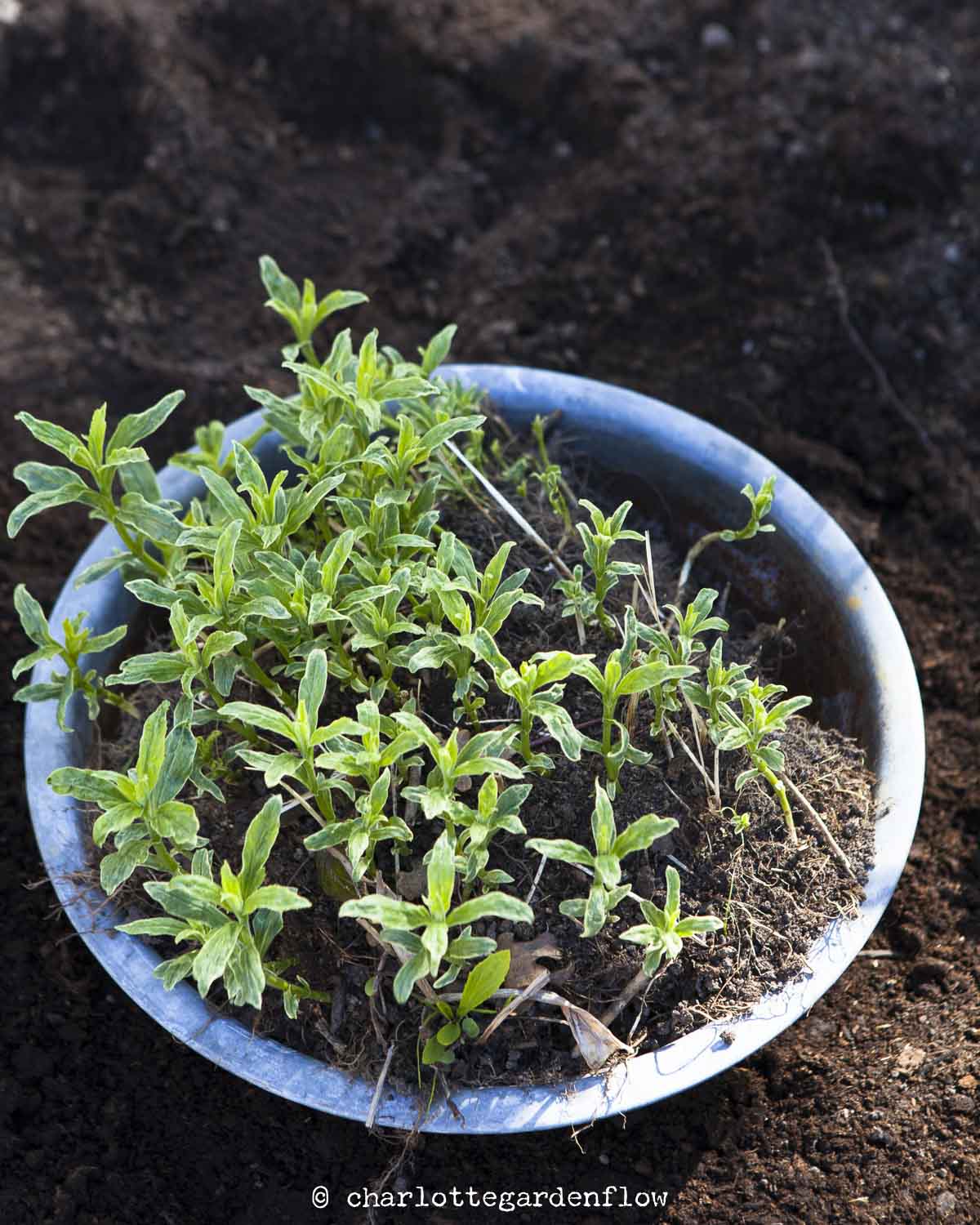 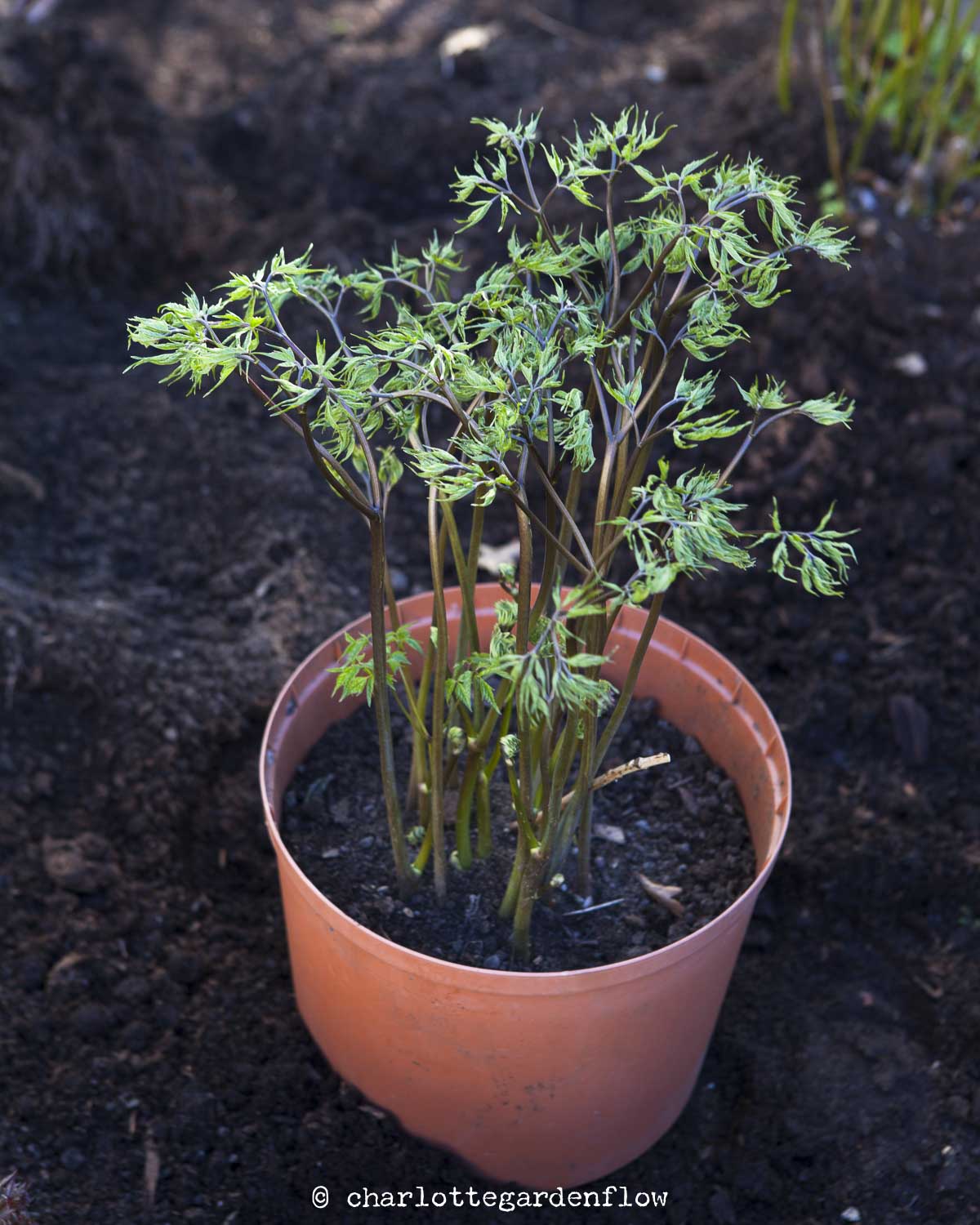 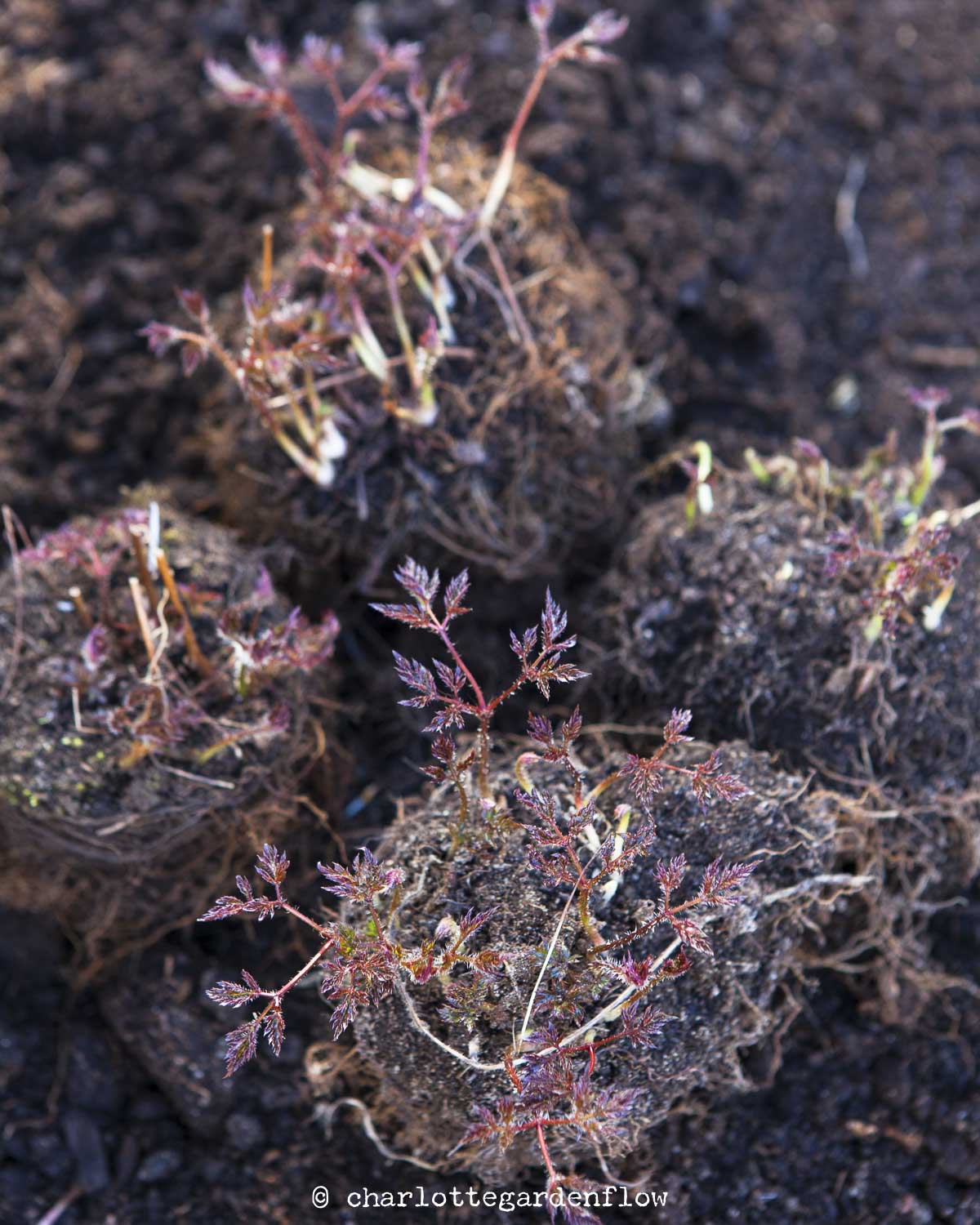 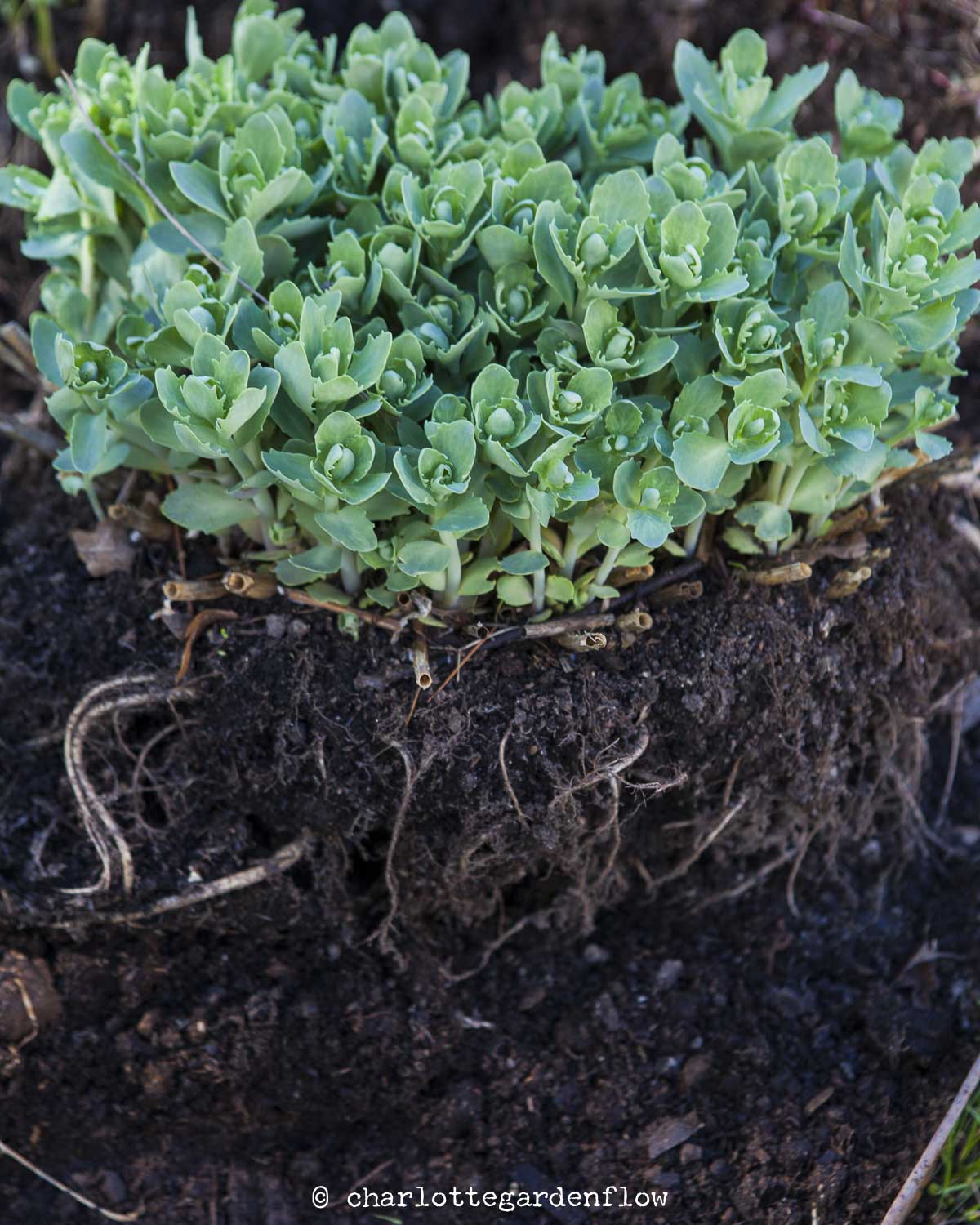 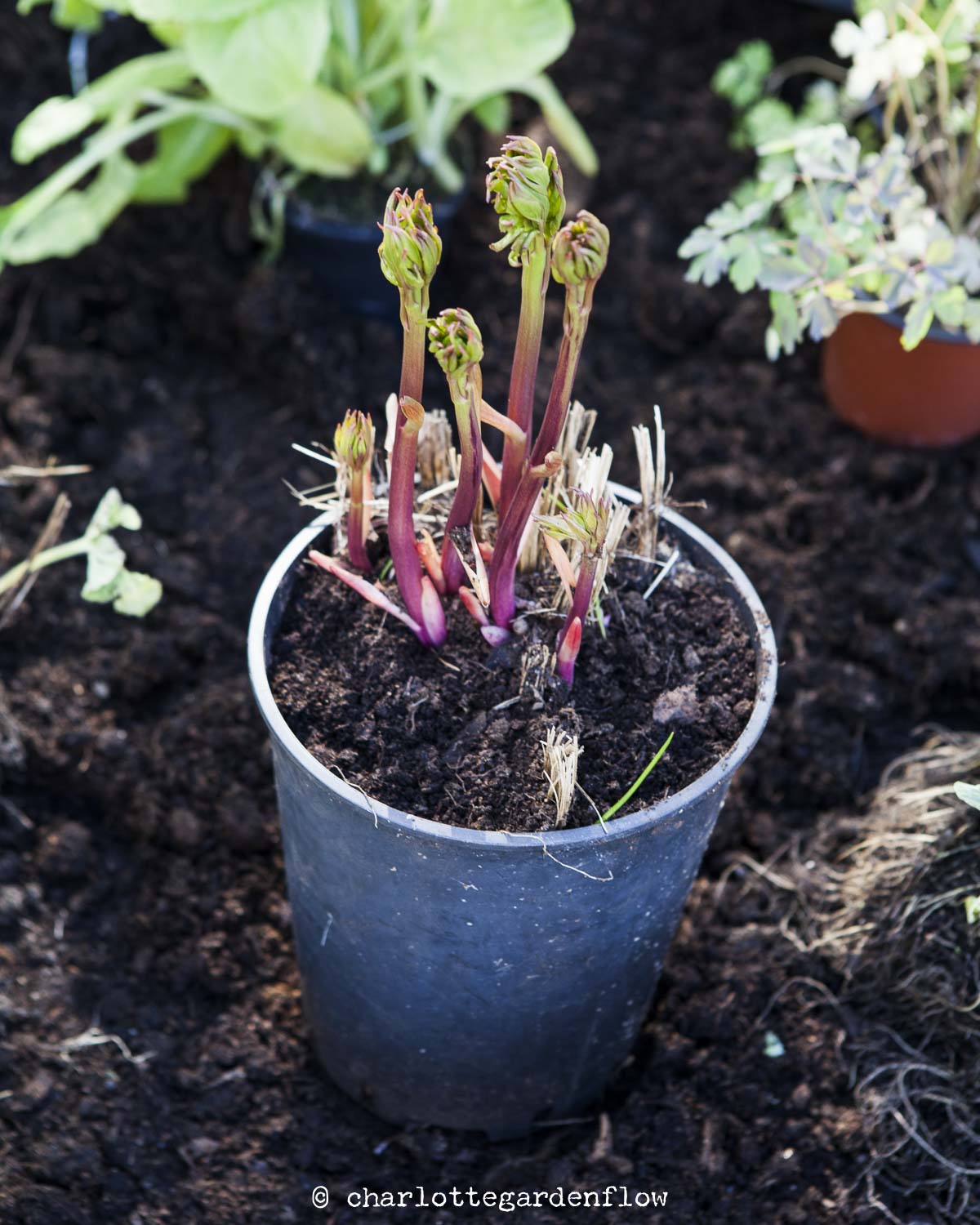 For extra protection, chicken wire has been dug down as an attempt to create a barrier where they had ploughed their way through to get to the flowerbed (through big stones). Unfortunately it was not possible to dig down further than 40 cm deep. As I mentioned earlier chicken wire has also been used to line the planting holes for certain plants. The wall in the back of the flowerbed (that is level with the bed), where they get through we will do our best to repair the holes. Three ‘vole scarers’ that give out both sound and vibration have also been stuck down into the flowerbed. When I spoke to the company skadedjursbekämpning.nu I was given the advice to take out the big guns to properly disturb the voles. Otherwise there is a chance that they get used to the sound, if you don’t put out enough of them or place them too far apart.  It’s better to do it properly. Apparently they remember the sound, or the experience of the sound, so if they have got scared by the sound once and then hear the sound again they should keep away, according to the company skadedjursbekämpning.nu  I might add more scarers in other places too. 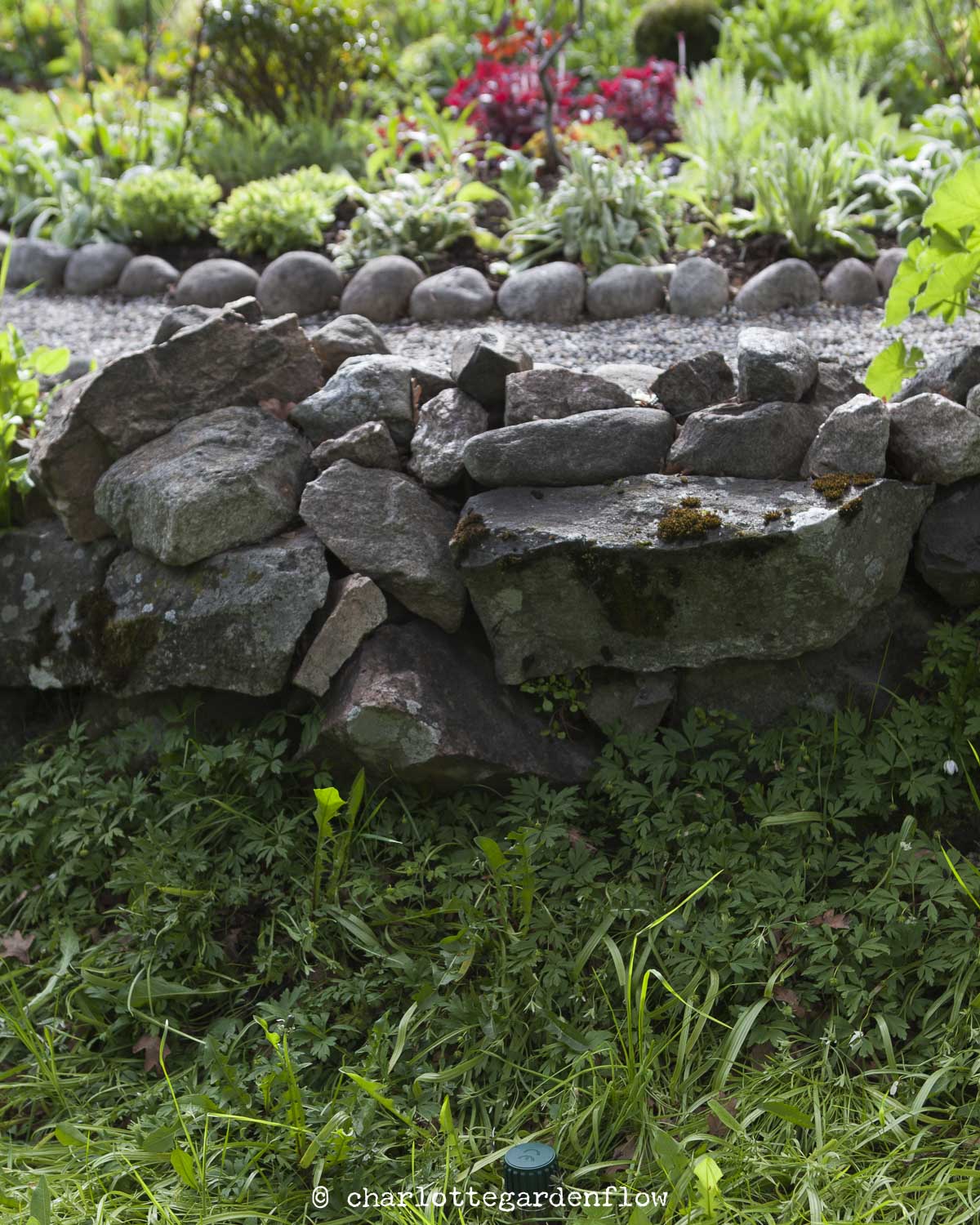 This is where the sores come into the rebate. Through cavities in the wall. 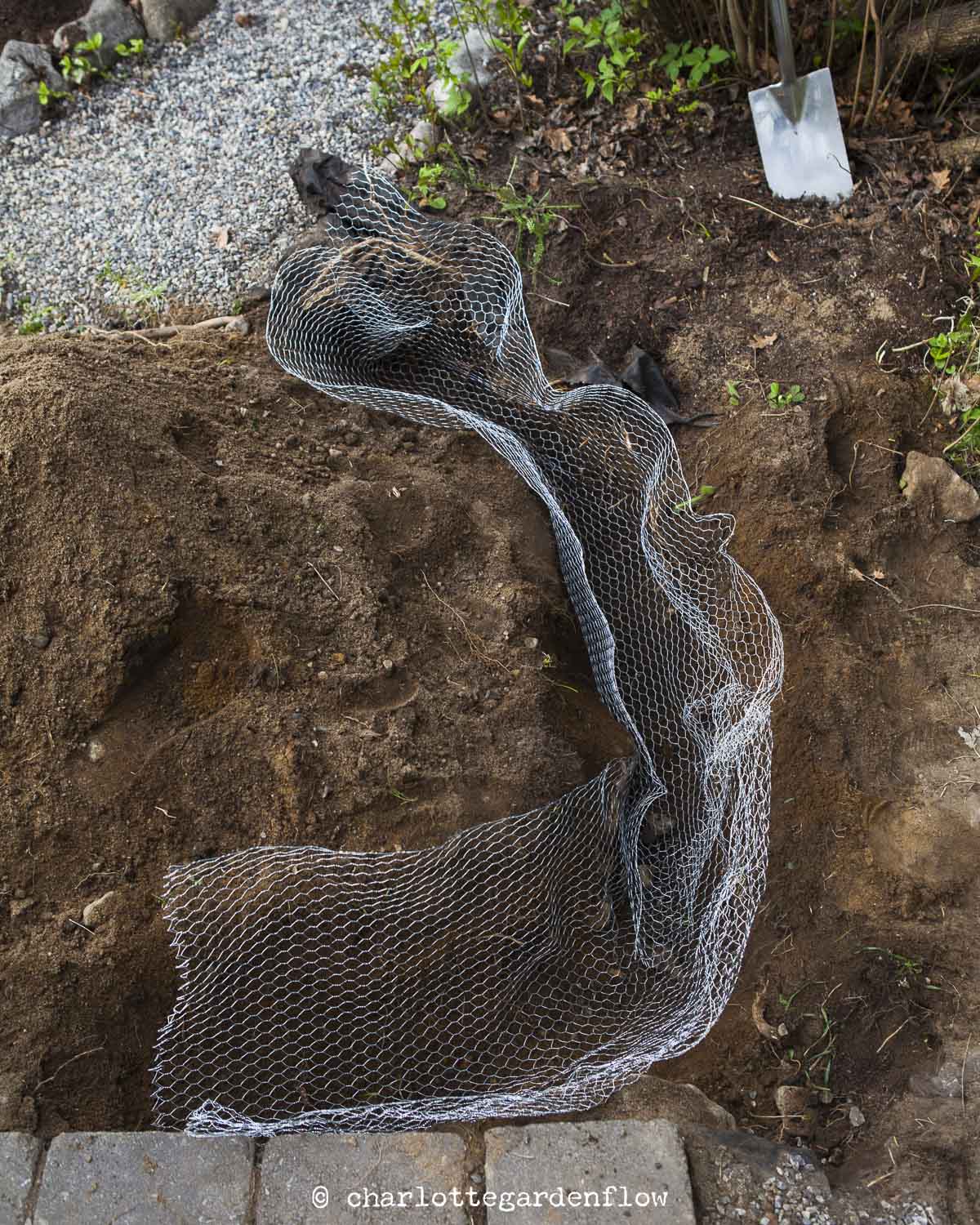 Chicken net as an attempt to barrier 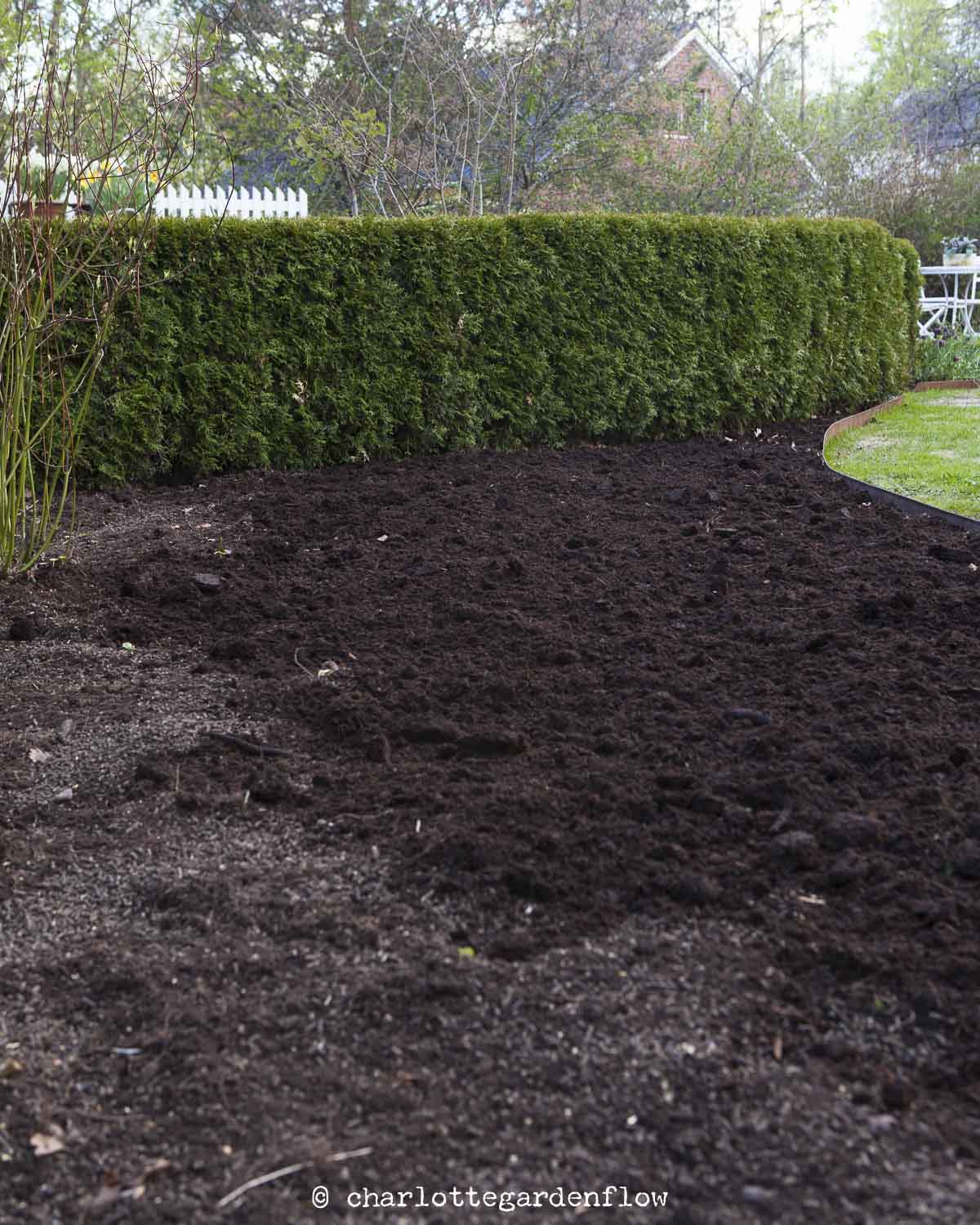 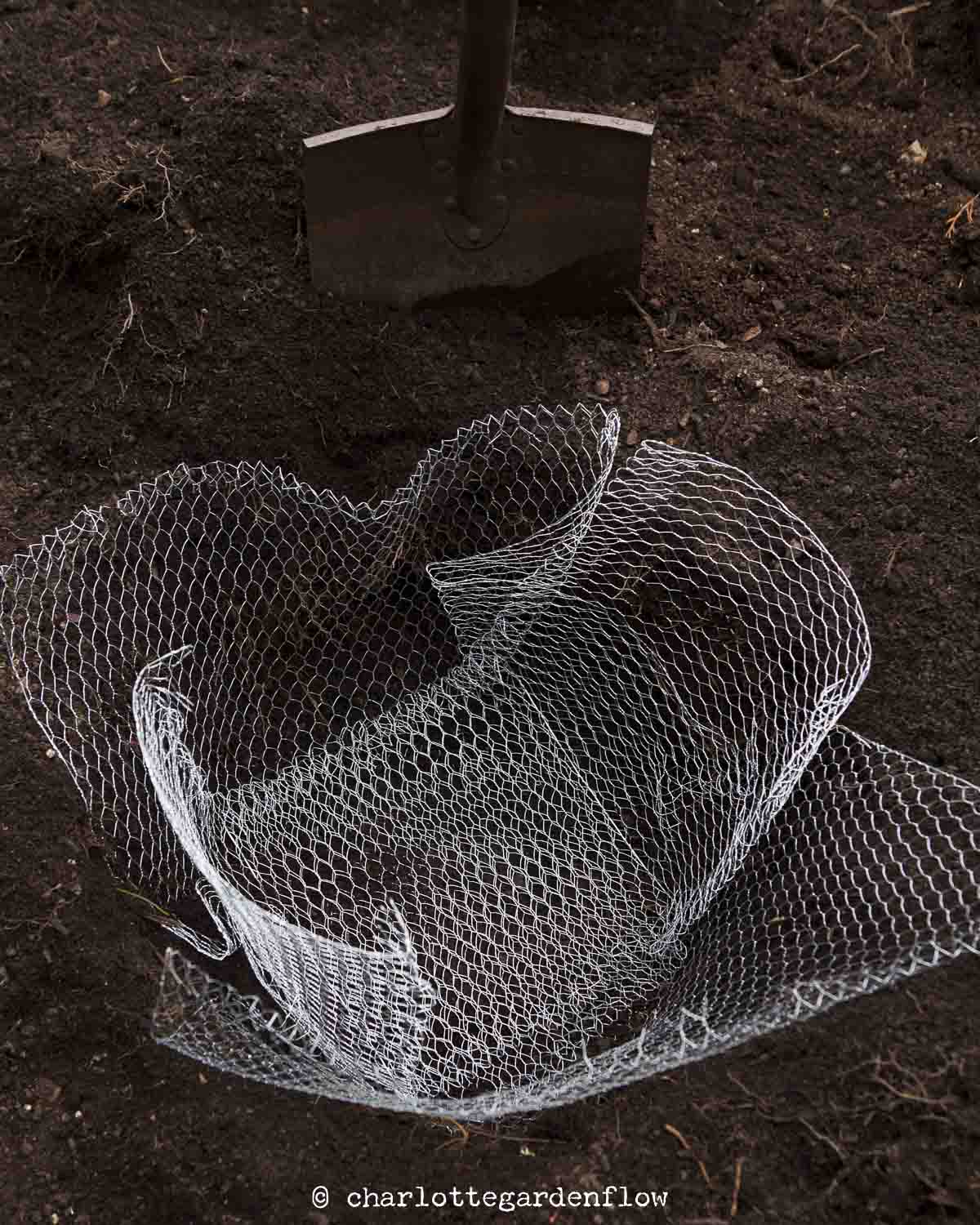 Some planting pits were dressed with chicken net as extra protection. 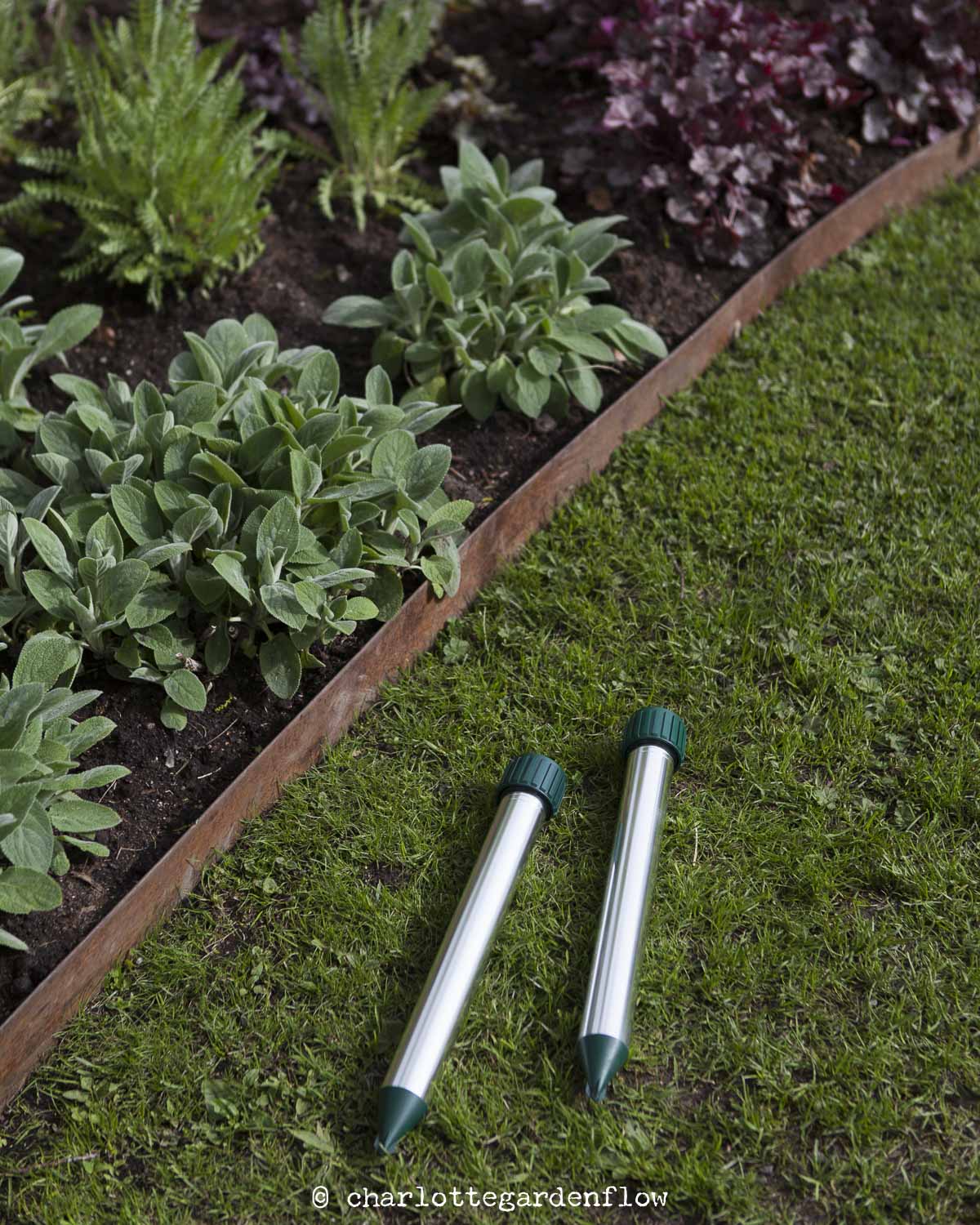 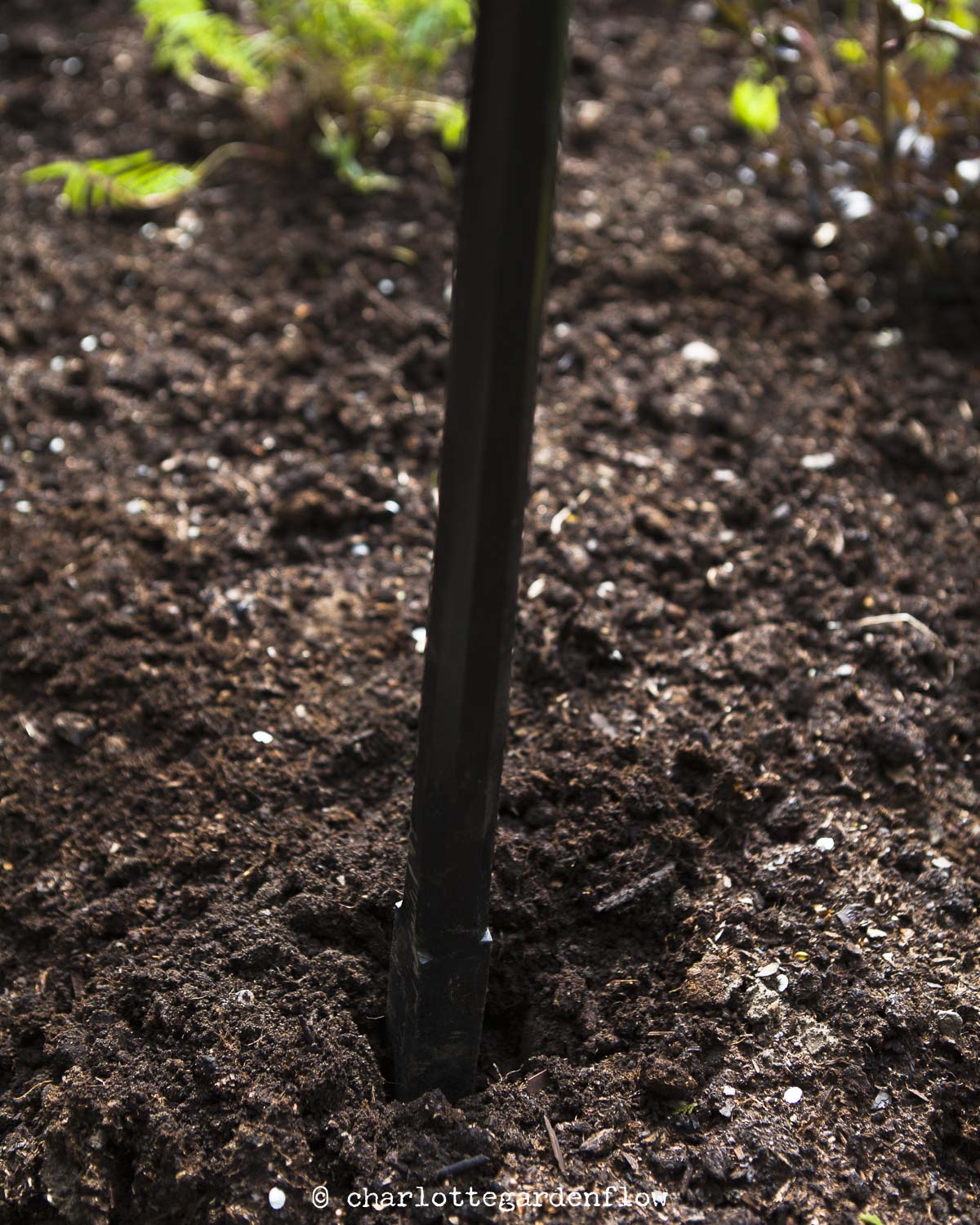 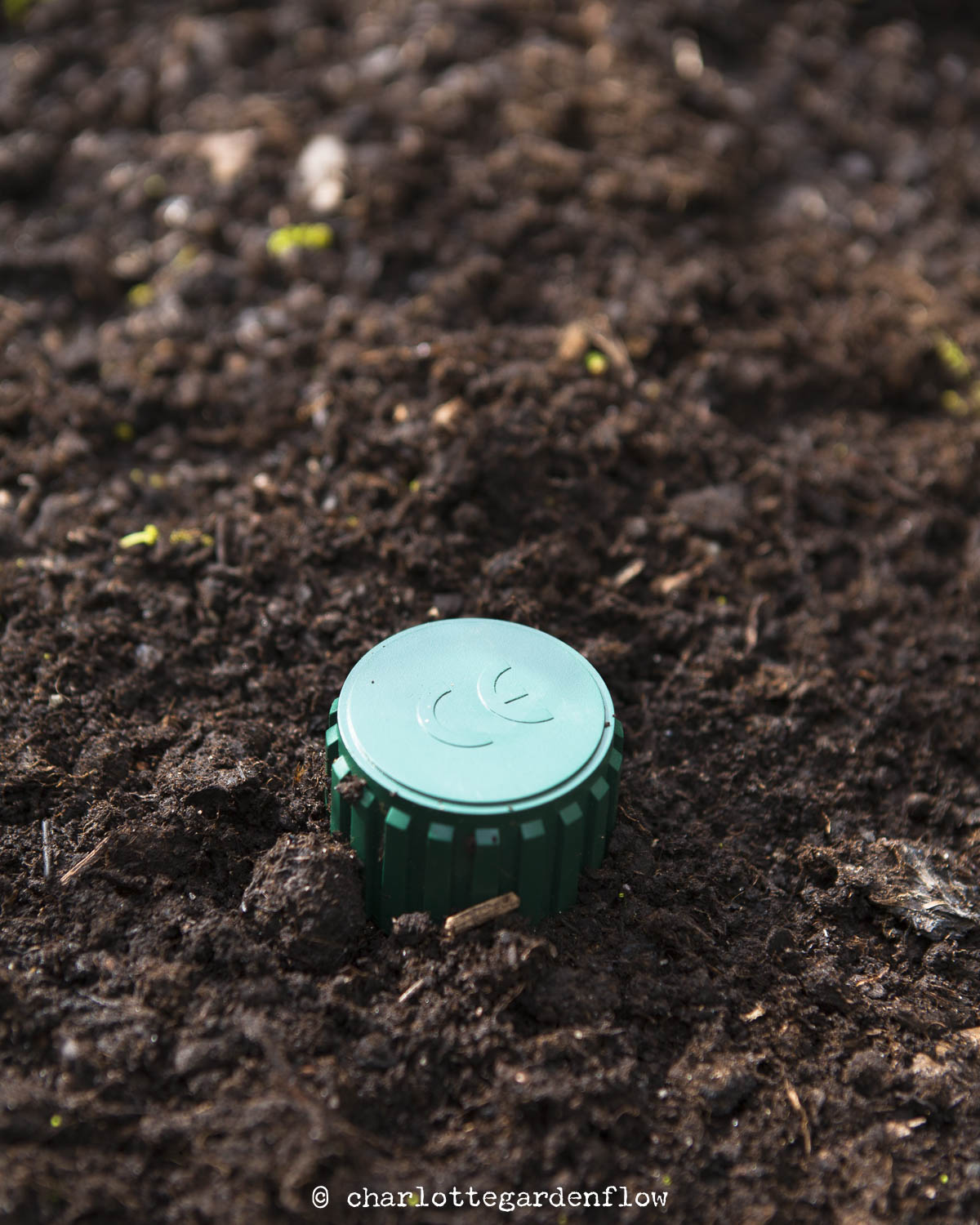 The flowerbed stretches from a dry and warm location nearest the oak, to a colder and more moist area towards the cedar hedge. Hence the different  types of preferred habitats in the list.

Climbing Monk’s hood (Aconitum Hemsleyanum ‘Red Wine’) is on the shopping list and I will also try another couple of ‘new’ plants as well. 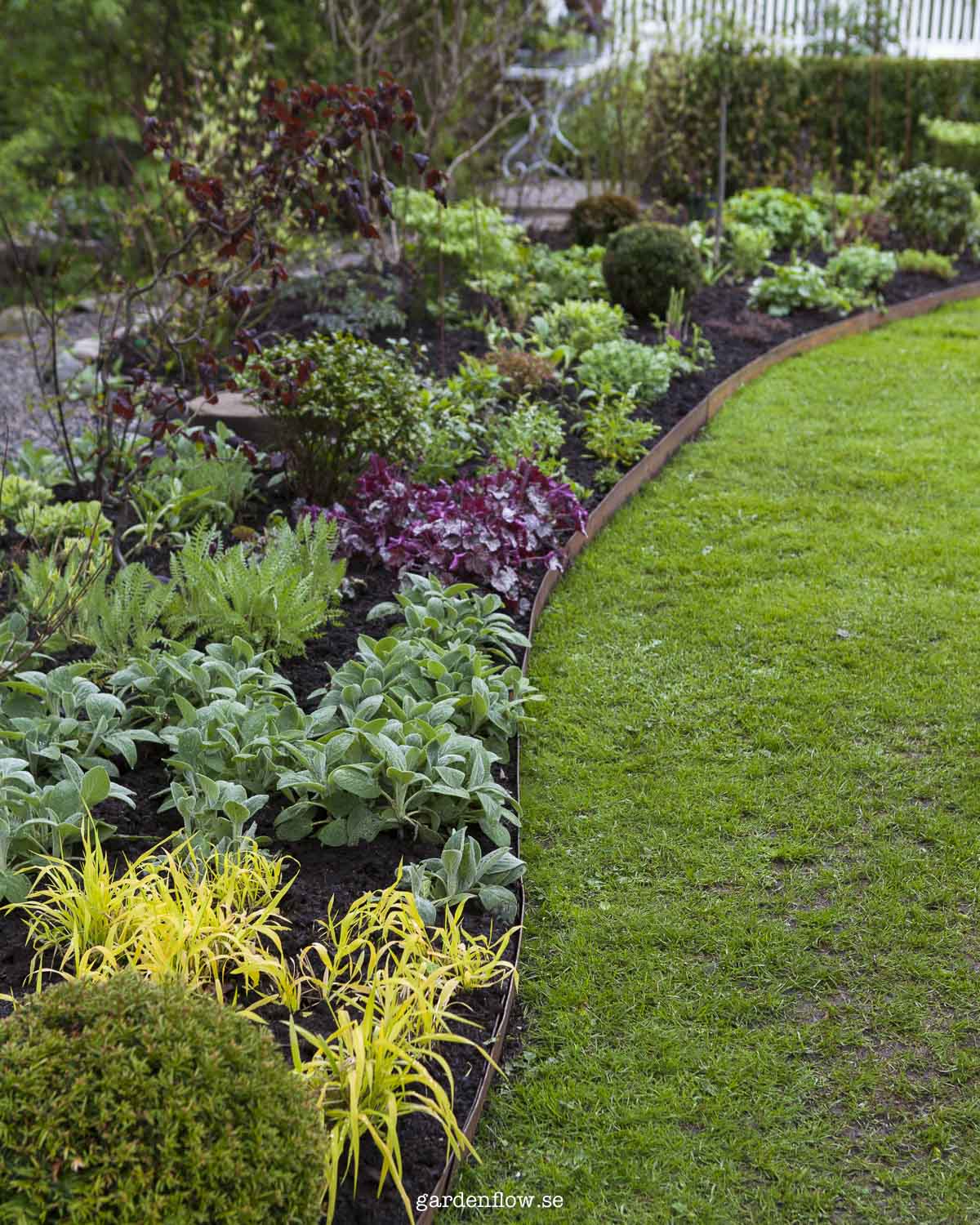 In a few weeks the plants will grow and fill up the border.

Now all I can do is to keep my fingers crossed. Jumping a few rain or sun dances around the flowerbed to make some noise. To be attentive, inventive and not to forget to change the batteries in the scarers. I’m sure I will come back with more updates about how it is progressing!

November, Pots
Secured pots in the greenhouse
May
Vole infestation