truly look forward to our vacation in just over a week’s time. There will be both jungle and beach. And a visit to the nearby Botanical garden. That is a must. If there is a botanical garden nearby when we are travelling I always need to visit it. I don’t have a big collection of those kind of visits yet but one I really want to go back to is the Beijing botanical garden that I visited a few years back. With my patient family as company it was not really the perfect time for walking through the whole complex or to stay too long but I had enough time to be convinced. It was such an exciting visit. Not only the garden, but the people were just as interesting. 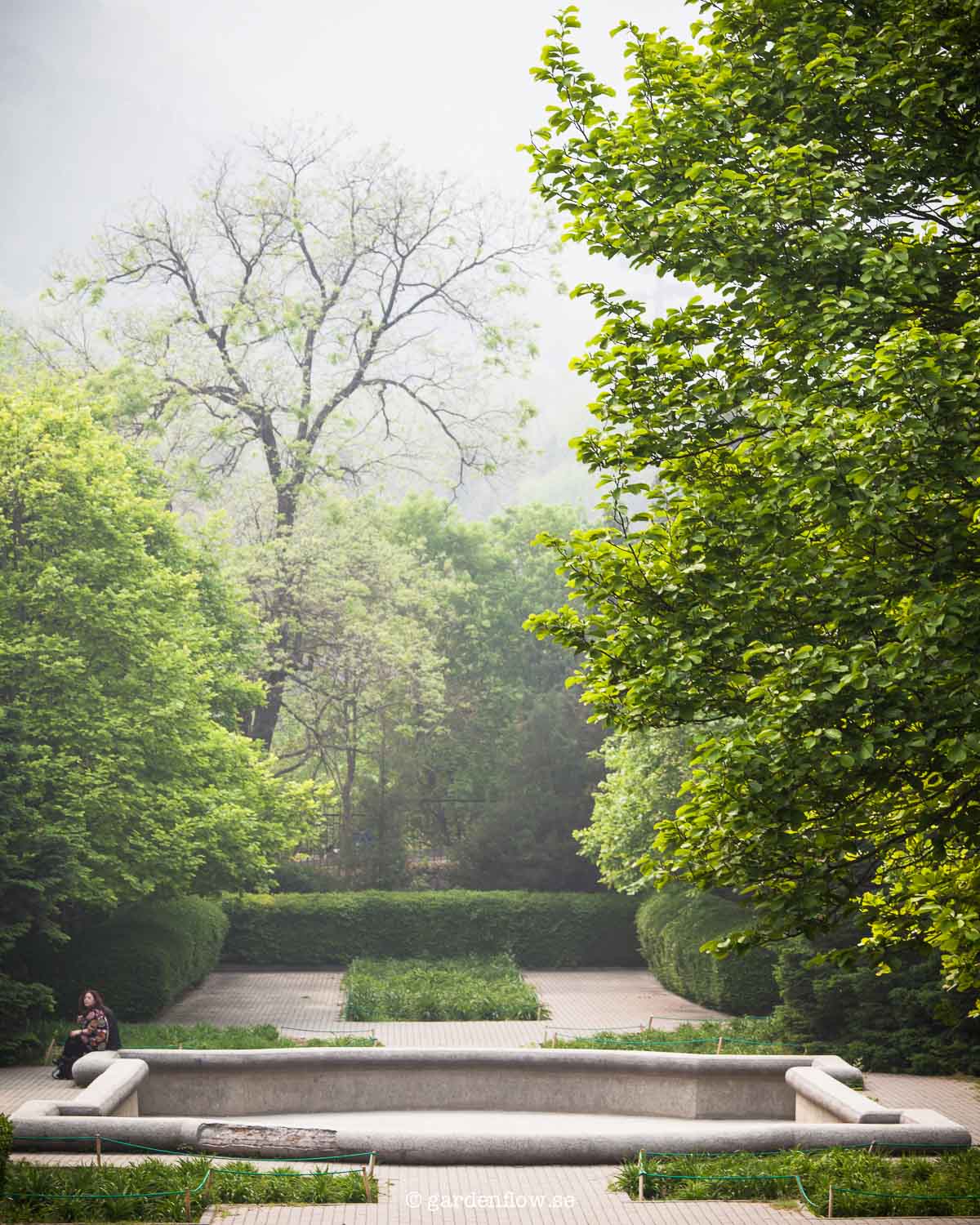 The fog hung like a shimmering veil over the pictures, not just here but everywhere we went in Beijing. Very beautiful but not a good thing since it is coal smog from all the factories.

It is not the easiest place to get to on your own, but it is possible. The park is on the edge of Beijing with the mountains as a beautiful and otherworldly backdrop. Wherever you looked there were sweet chinese girls in colourful clothes, hats and umbrellas posing with something fancy that was in bloom. And it was just that combination to see the chinese people’s fascination of everything (especially the peonies), the shimmering fairy tale backdrop of the mountains, the awesome tree peonies and everything else that was blooming and beautifully green of course, that made me like this garden especially. 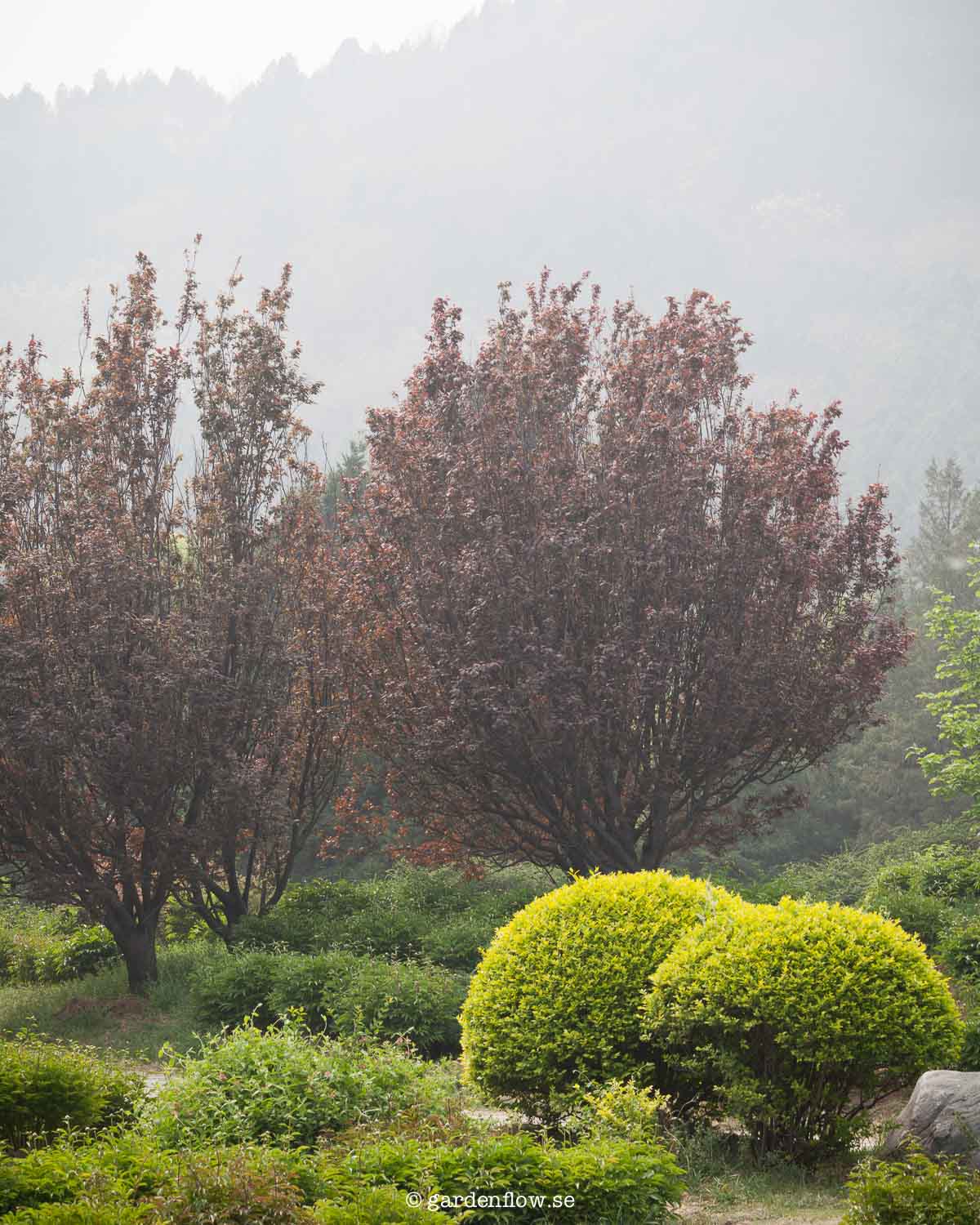 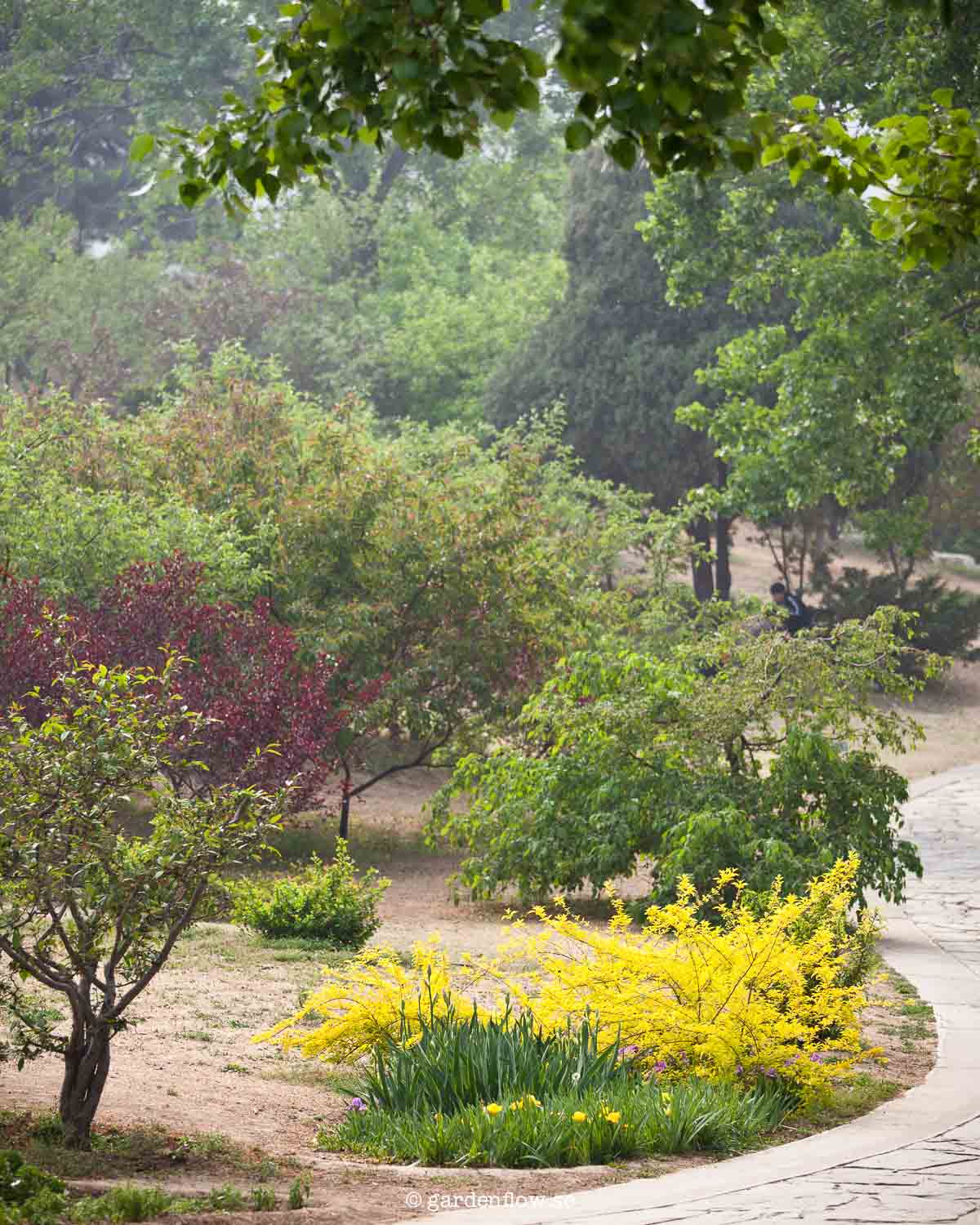 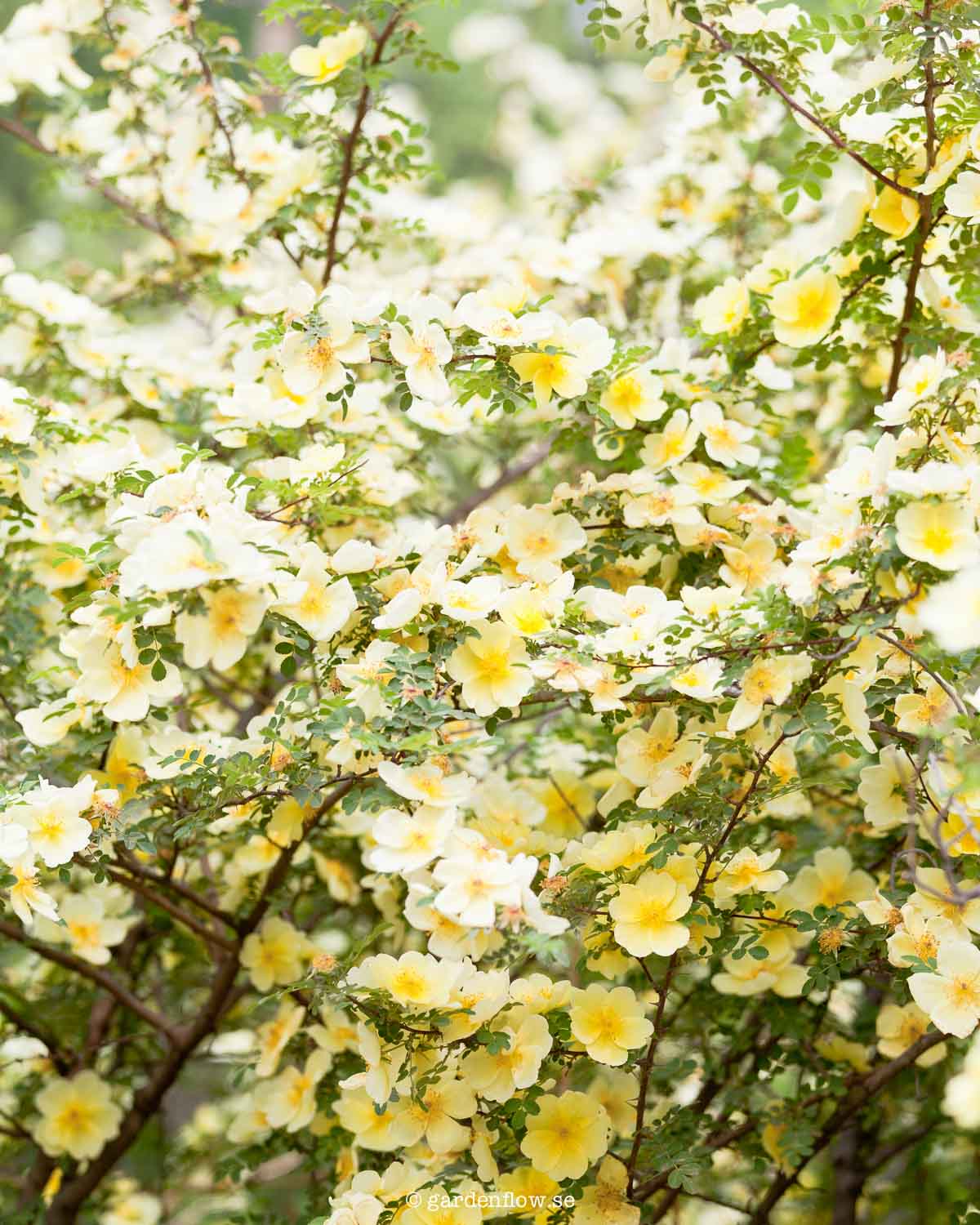 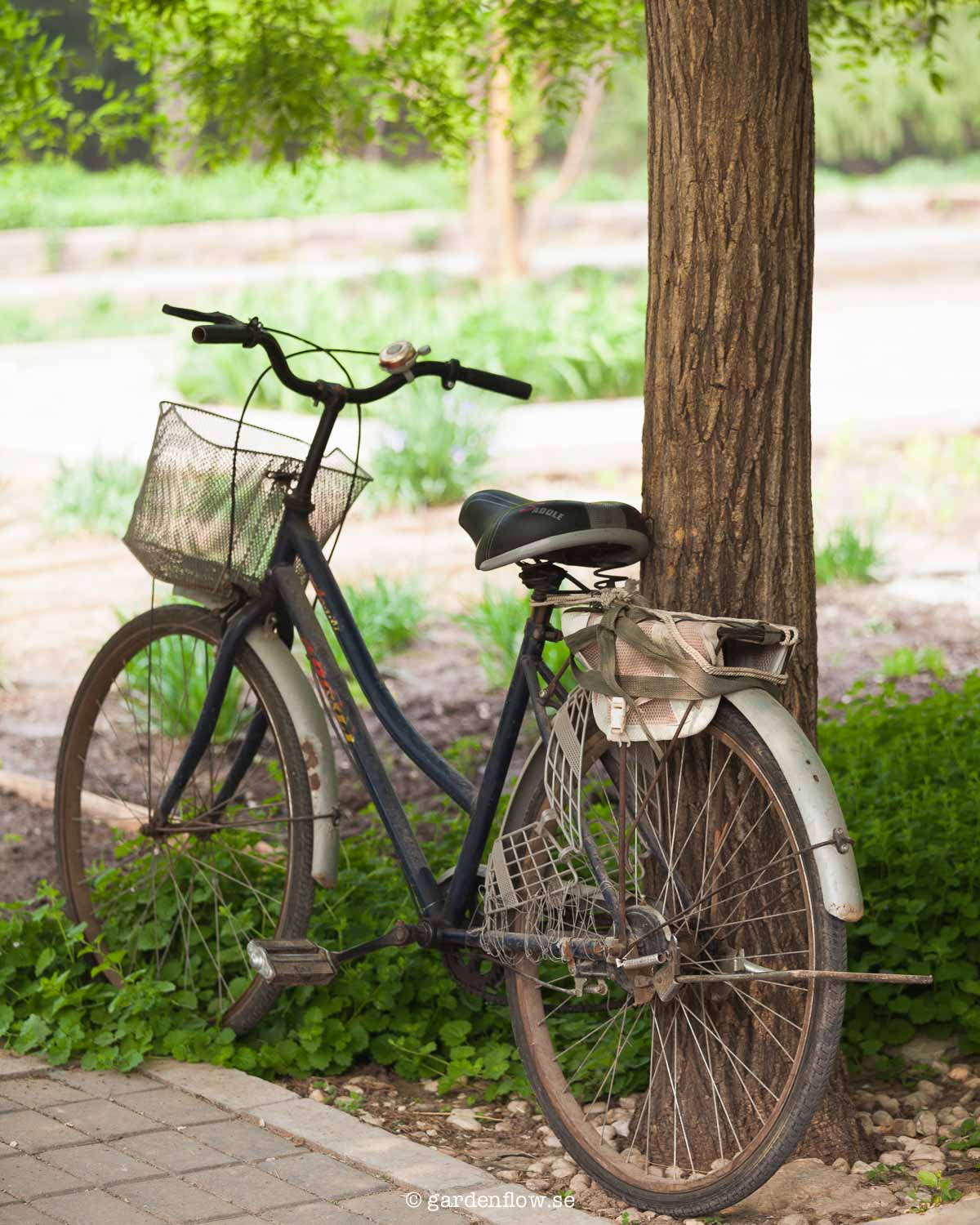 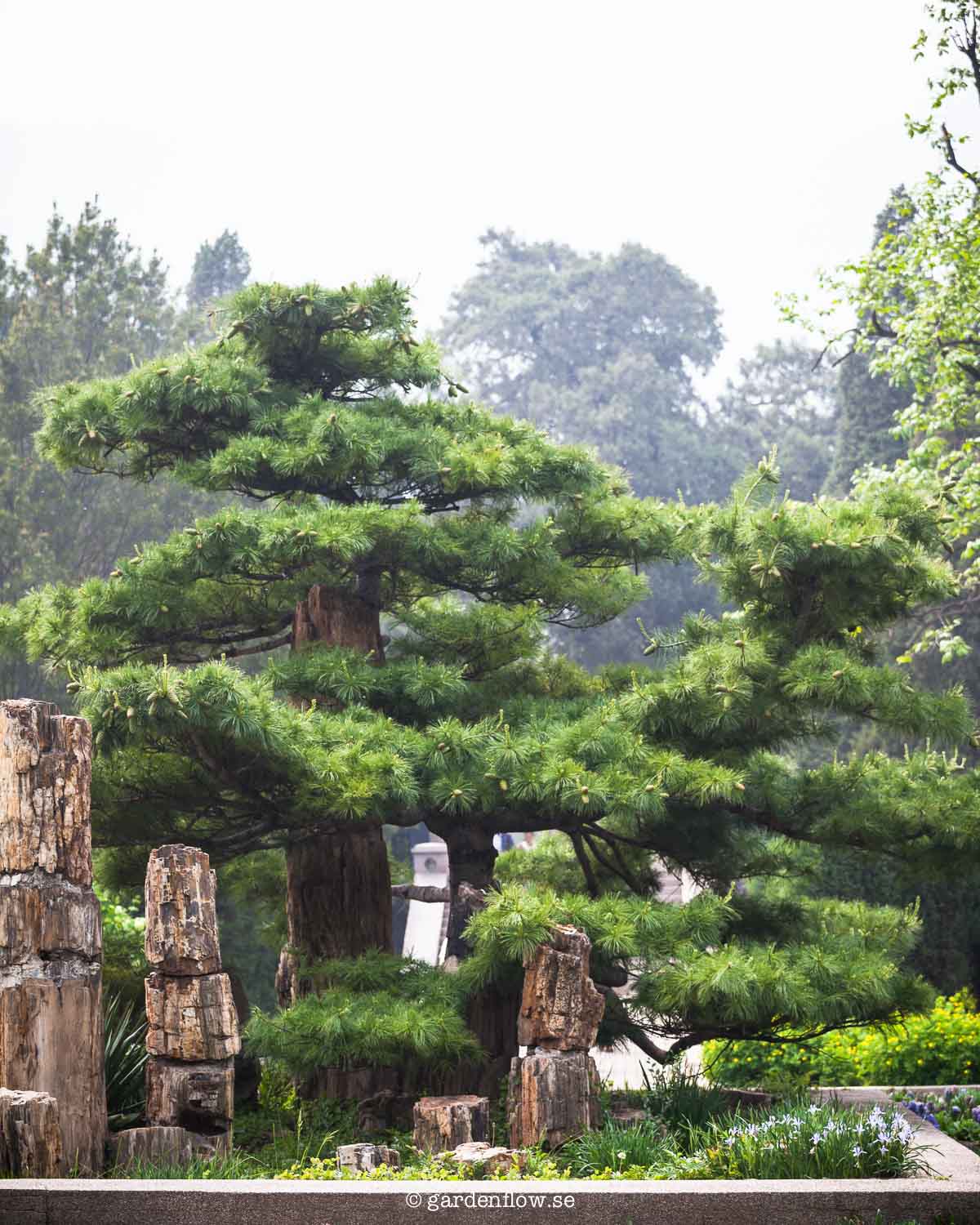 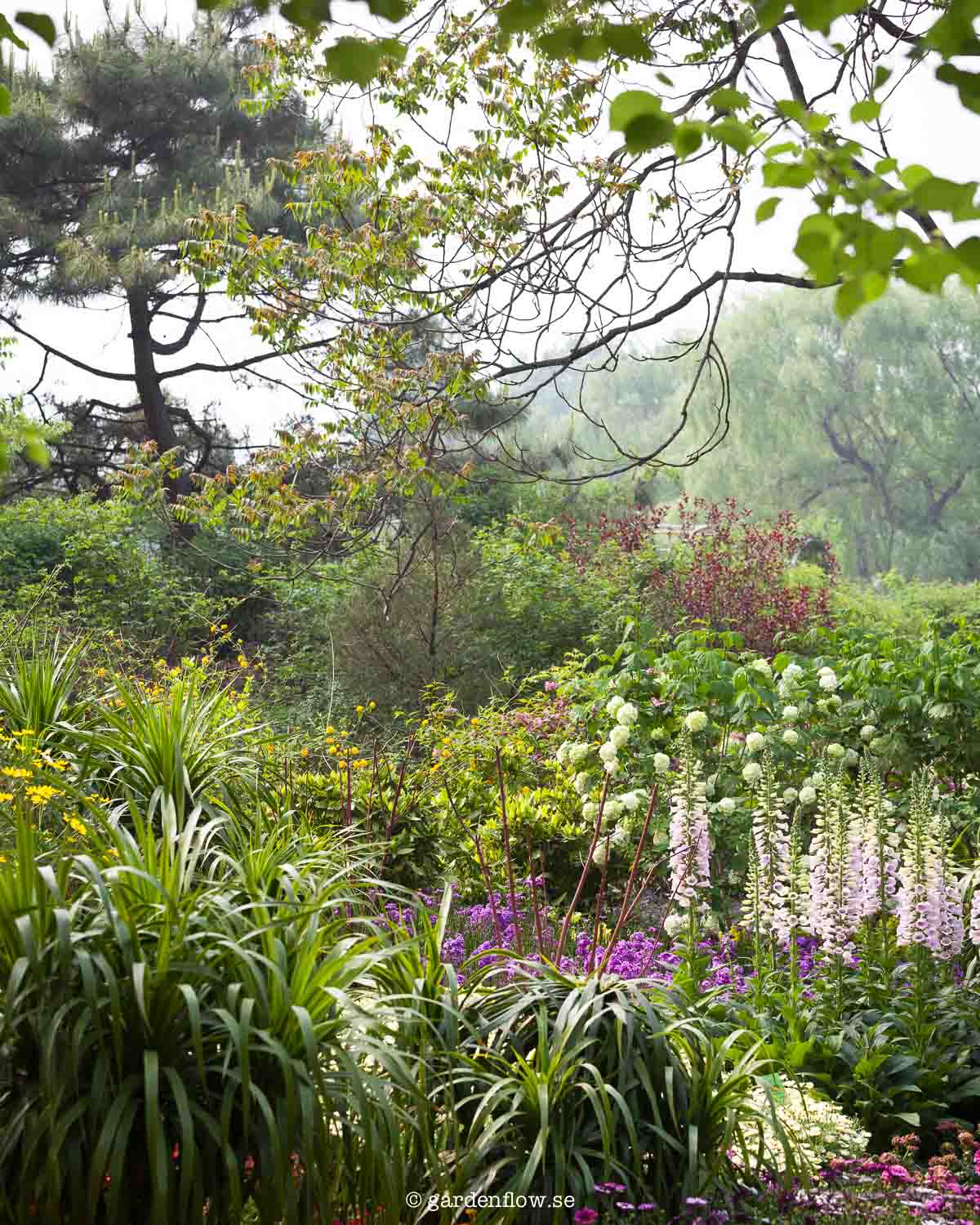 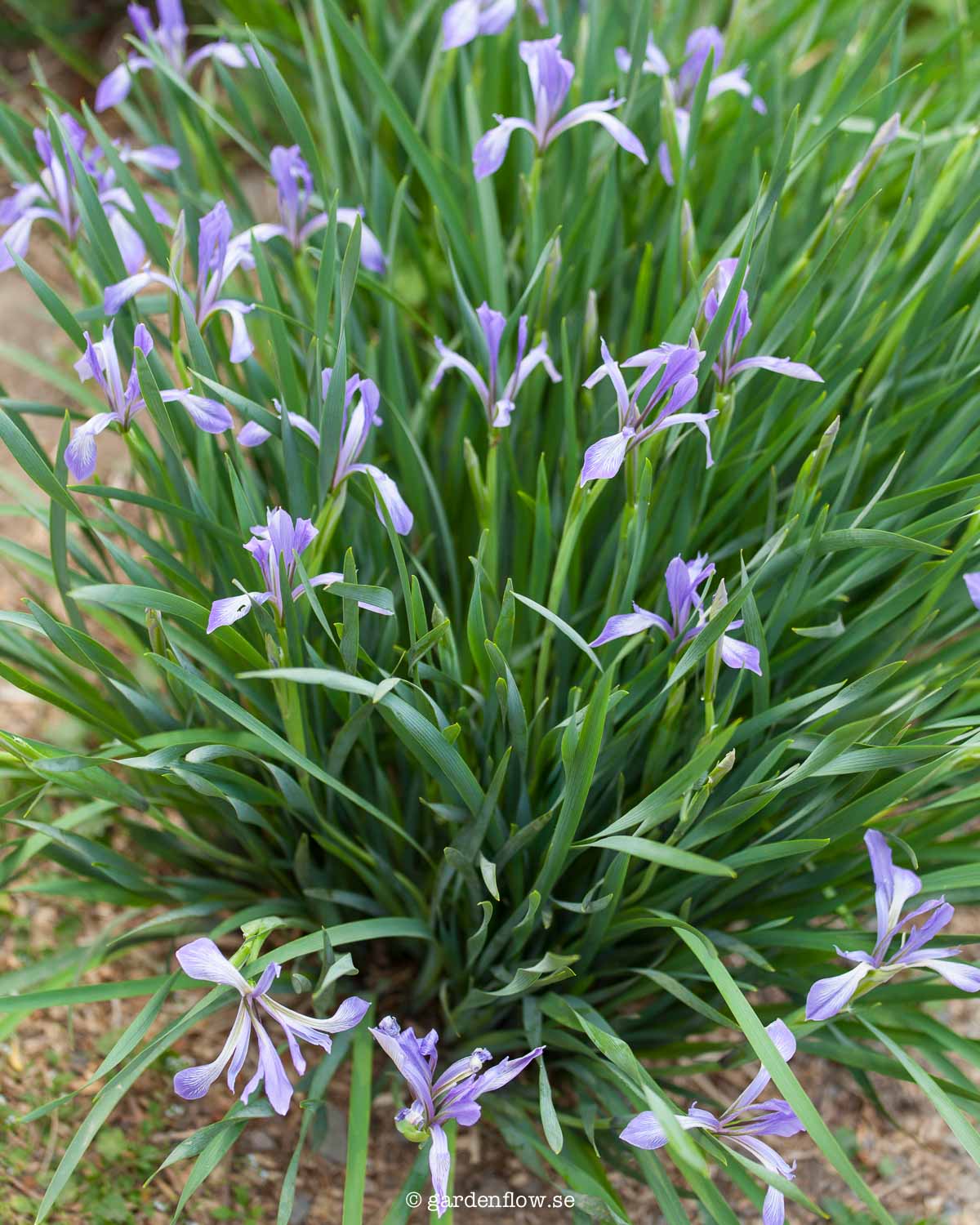 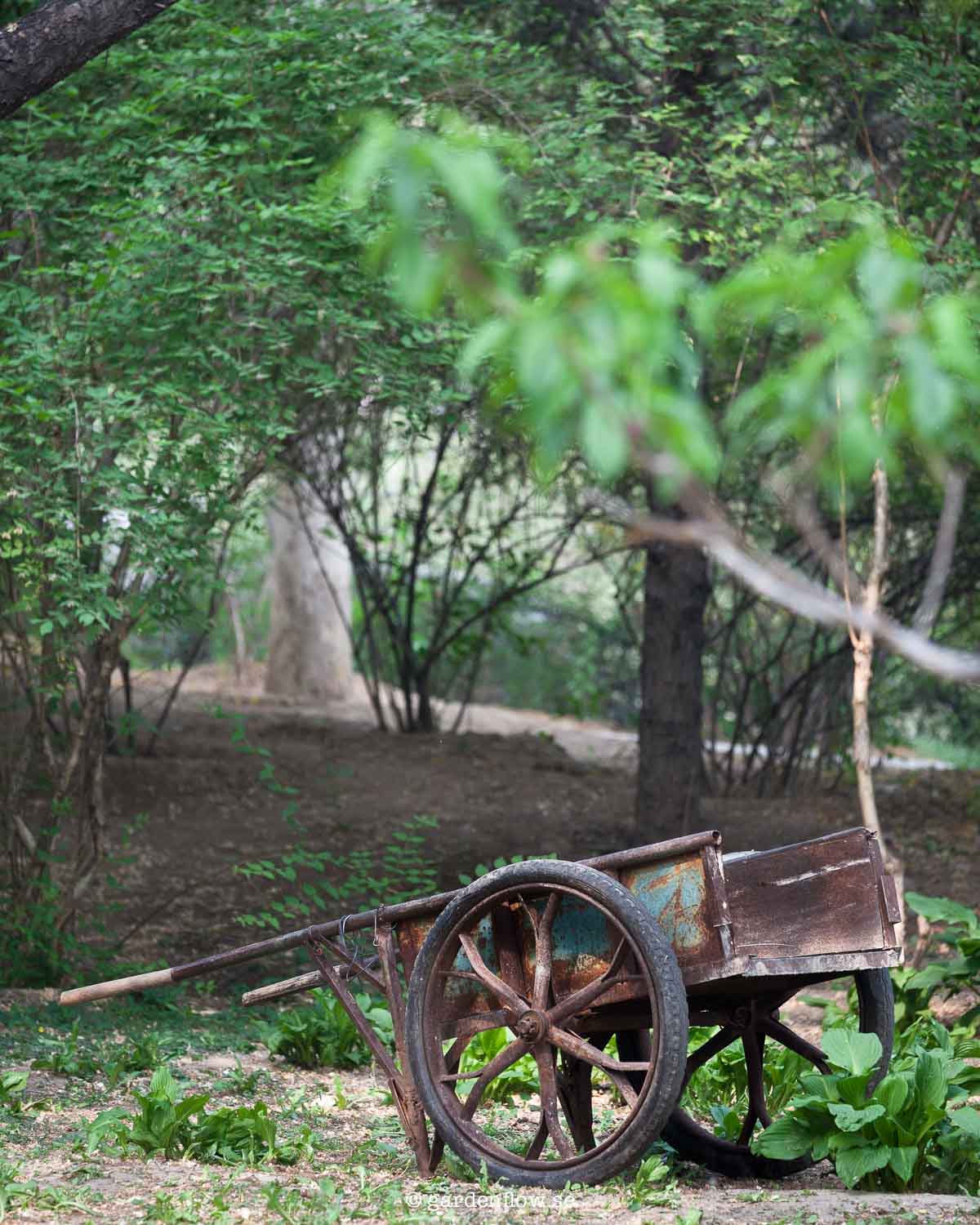 I became very quickly aware of this. There were three deeply engaged photography groups in a glade of a forest of peonies. I don’t know how many photography courses or groups I saw in the park. Screens and backdrops of different types and sizes were carried round and put up behind flowers.

Girls sketching on chairs they brought with them.
I also saw one who made a beautiful oil painting of a peony. 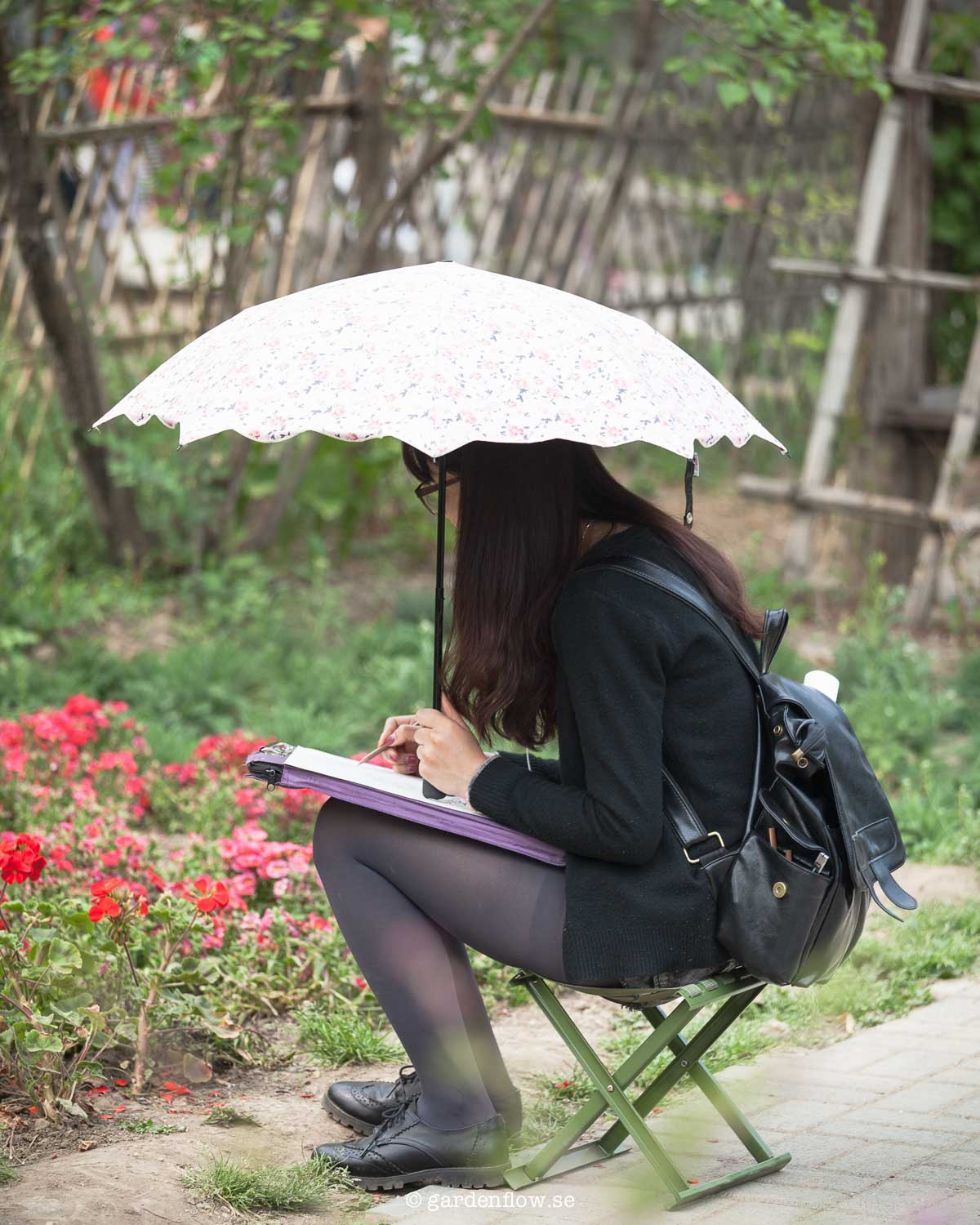 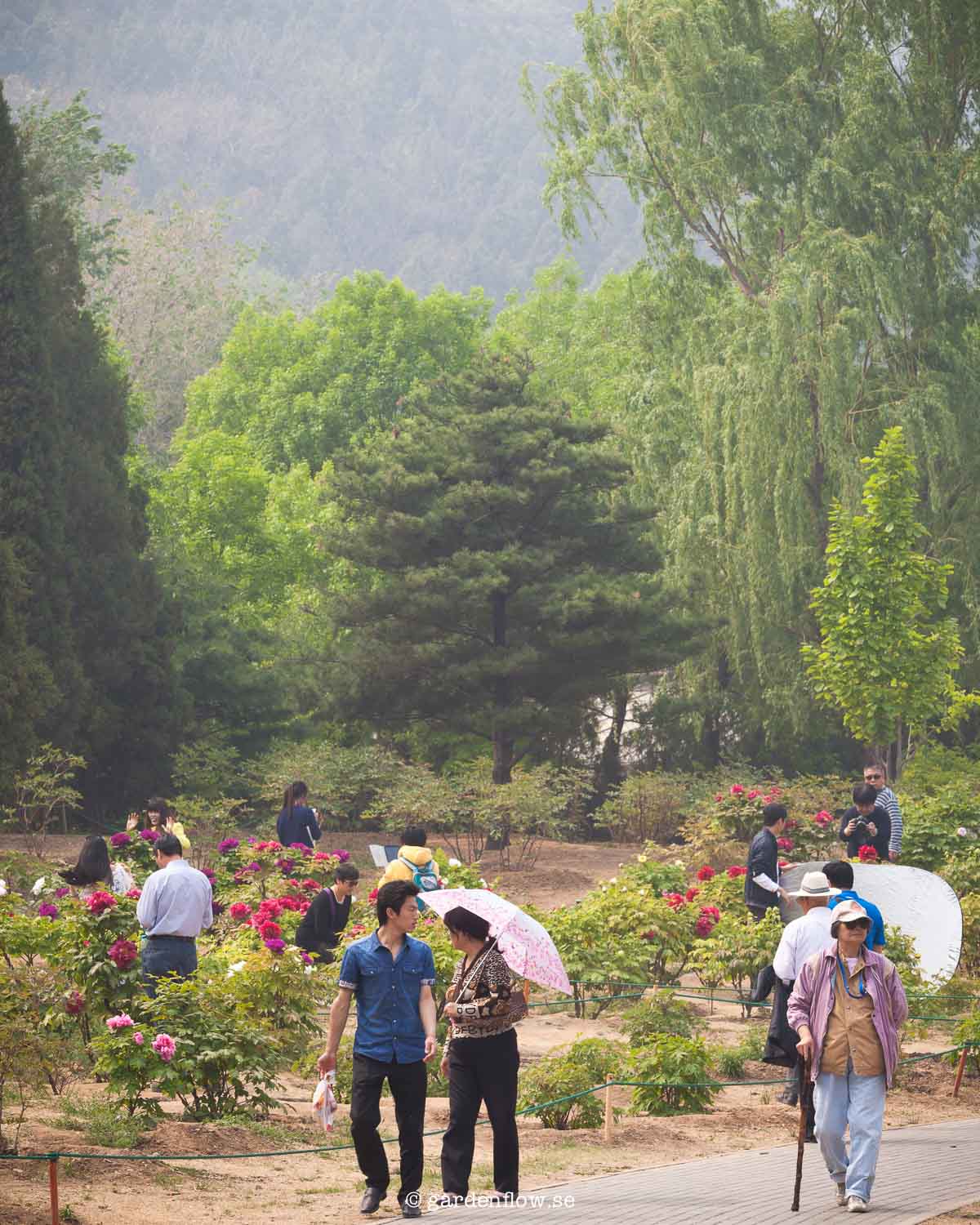 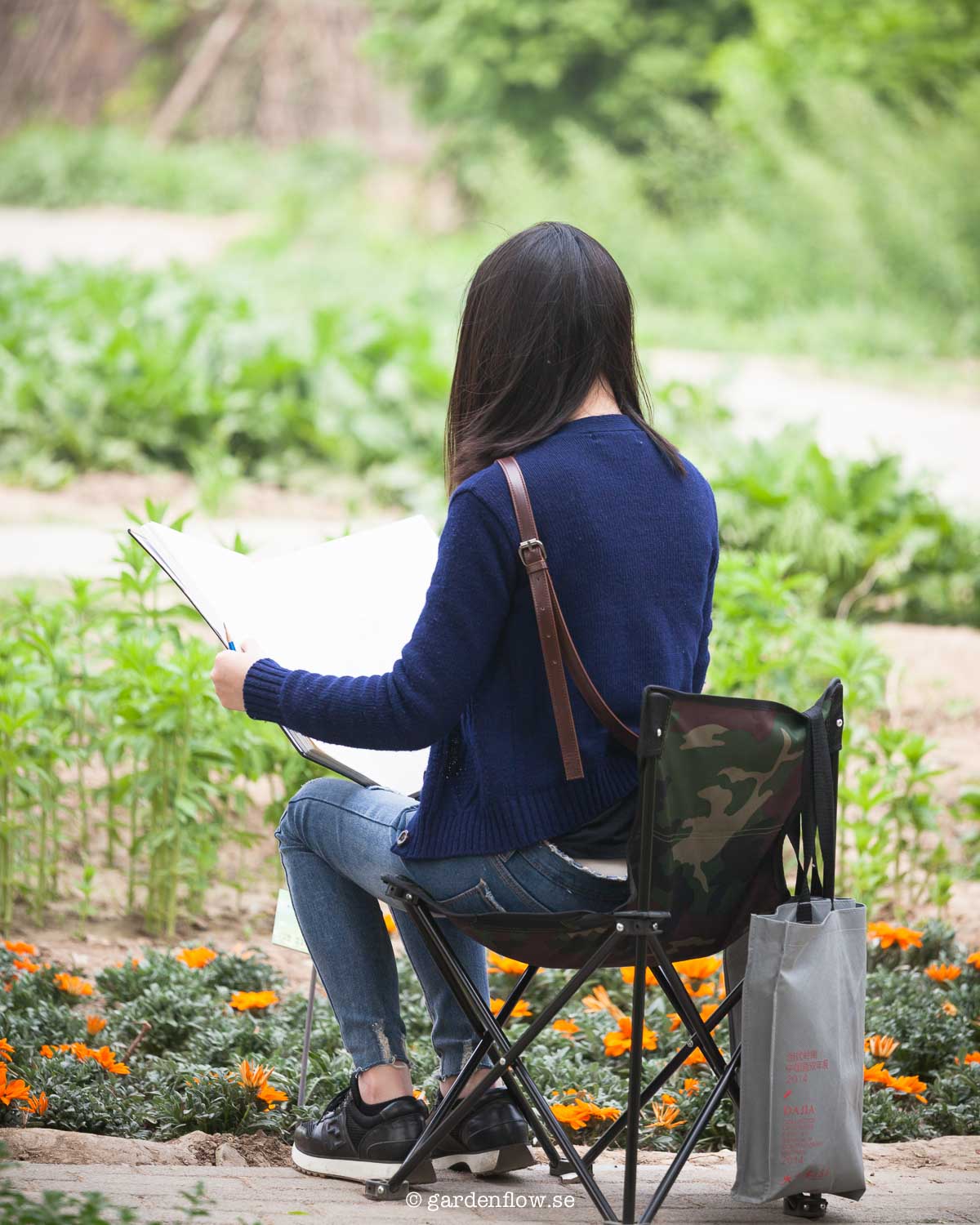 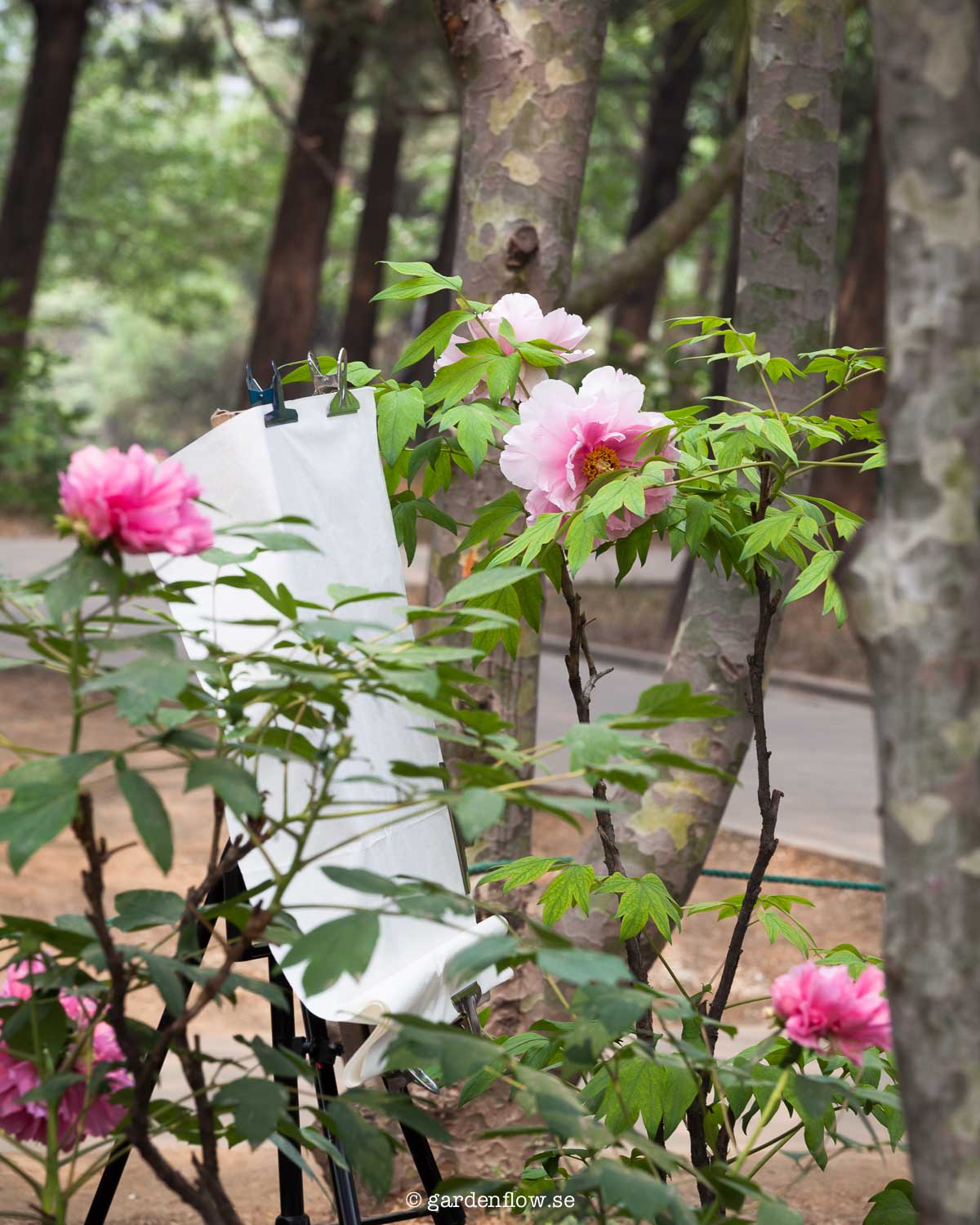 The ones that are not busy posing in front of the camera were very occupied with photographing, sketching or dedicatedly admiring everything that was in bloom. I did not see any men posing but in the photography groups there were more. 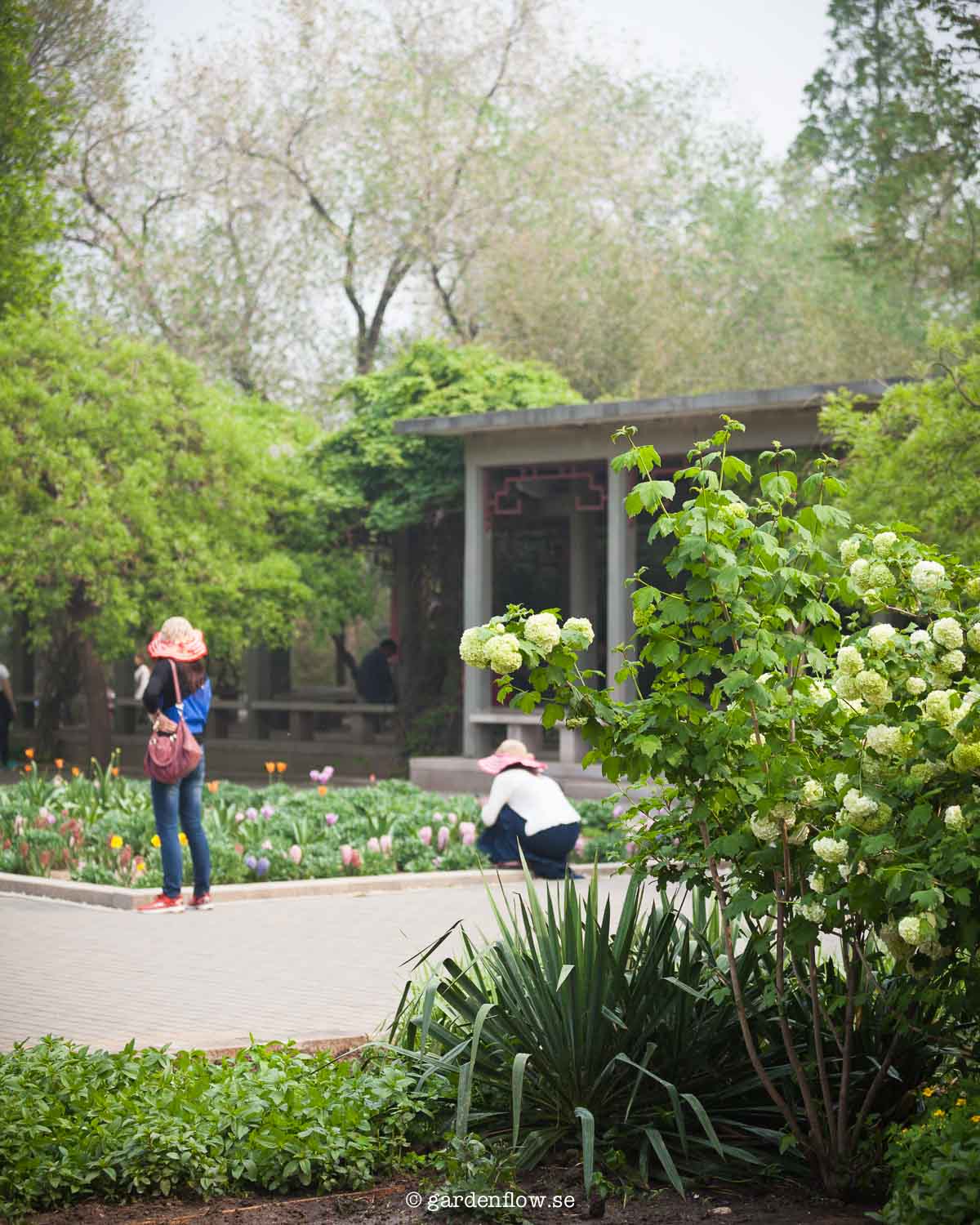 Selfies with the peonies.
Of course.

Selfies with peonies as a background were immensely popular and the posing chinese women seemed almost like flowers themselves with their colourful clothes and accessories. 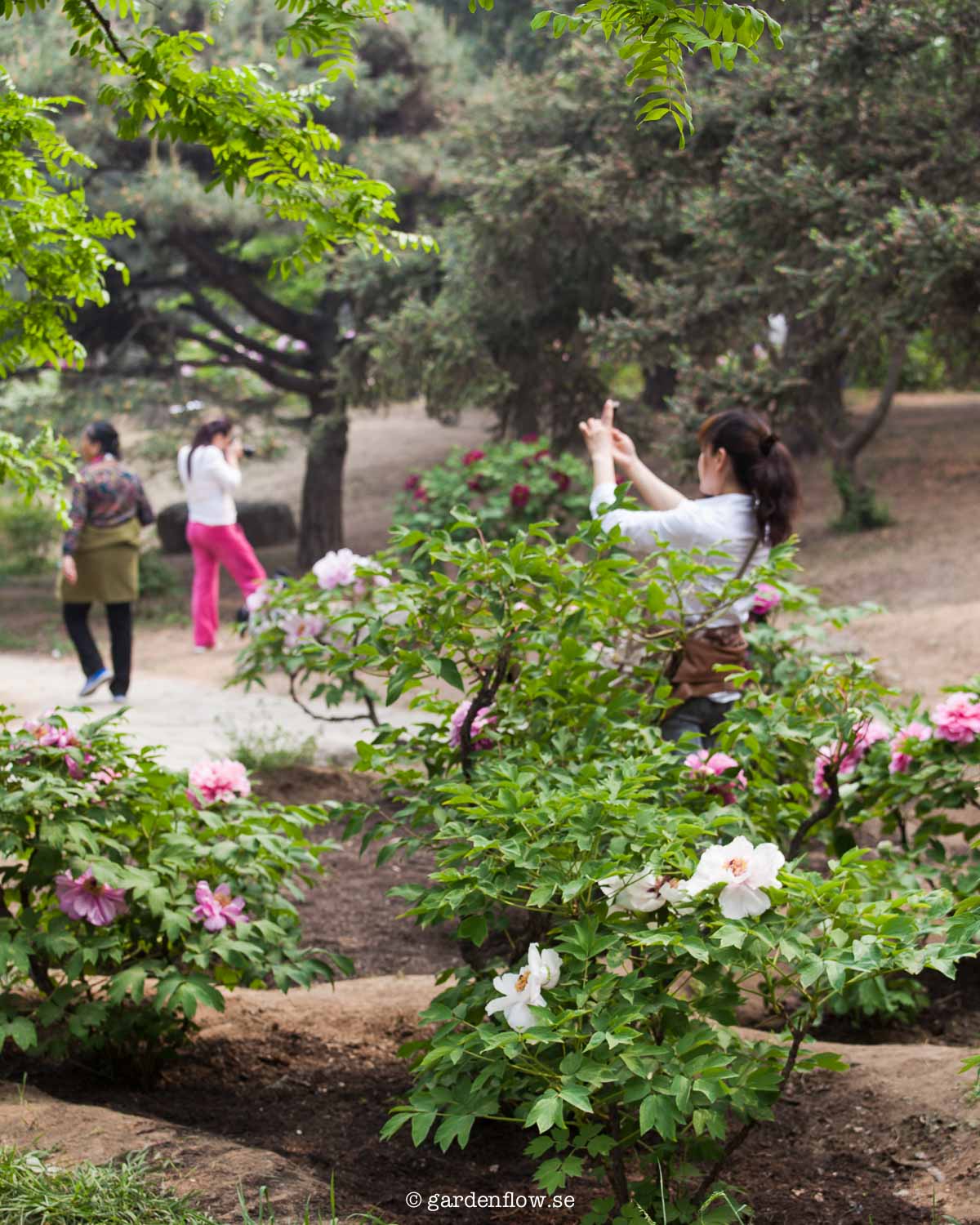 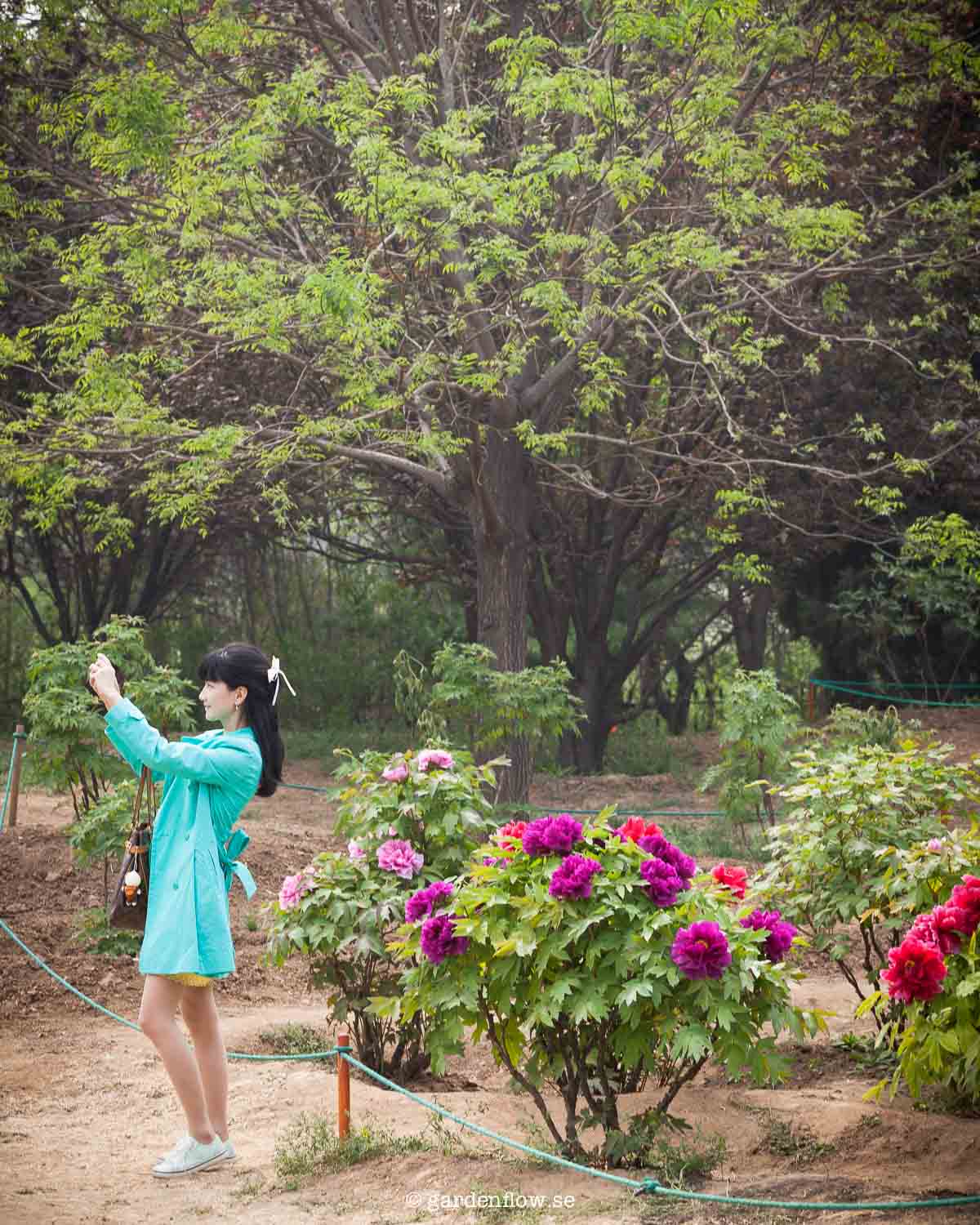 In the middle of the park there is a large and slightly futuristic greenhouse as a contrast to the other traditional buildings. I did not have time to go in there so I don’t actually know what is inside. Anyway, it was humongous. It was seasonally planted around the greenhouse. When we were there (in the middle of April) there were a lot of tulips in Keukenhof style. But also the kinds that are summer flowers at home. 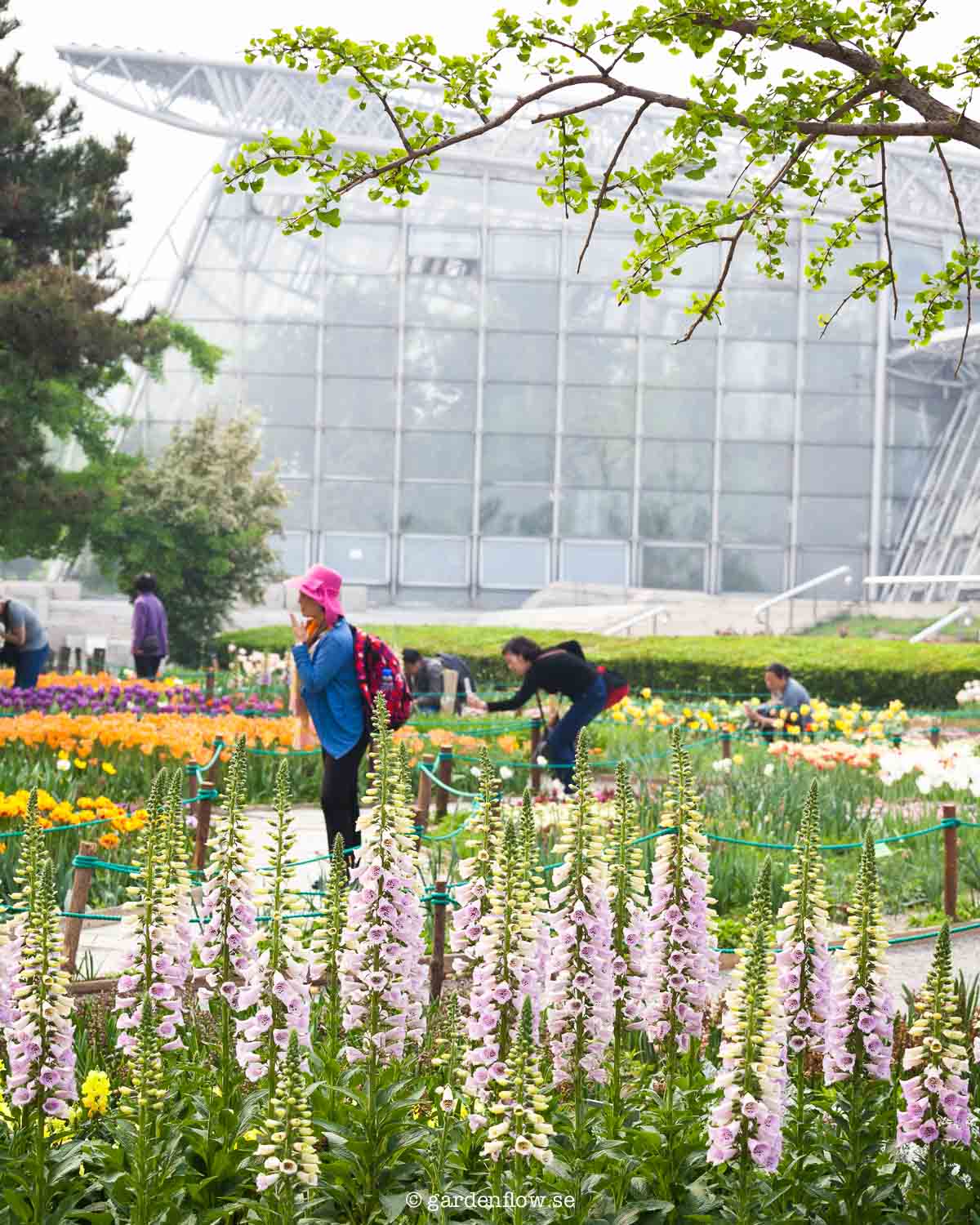 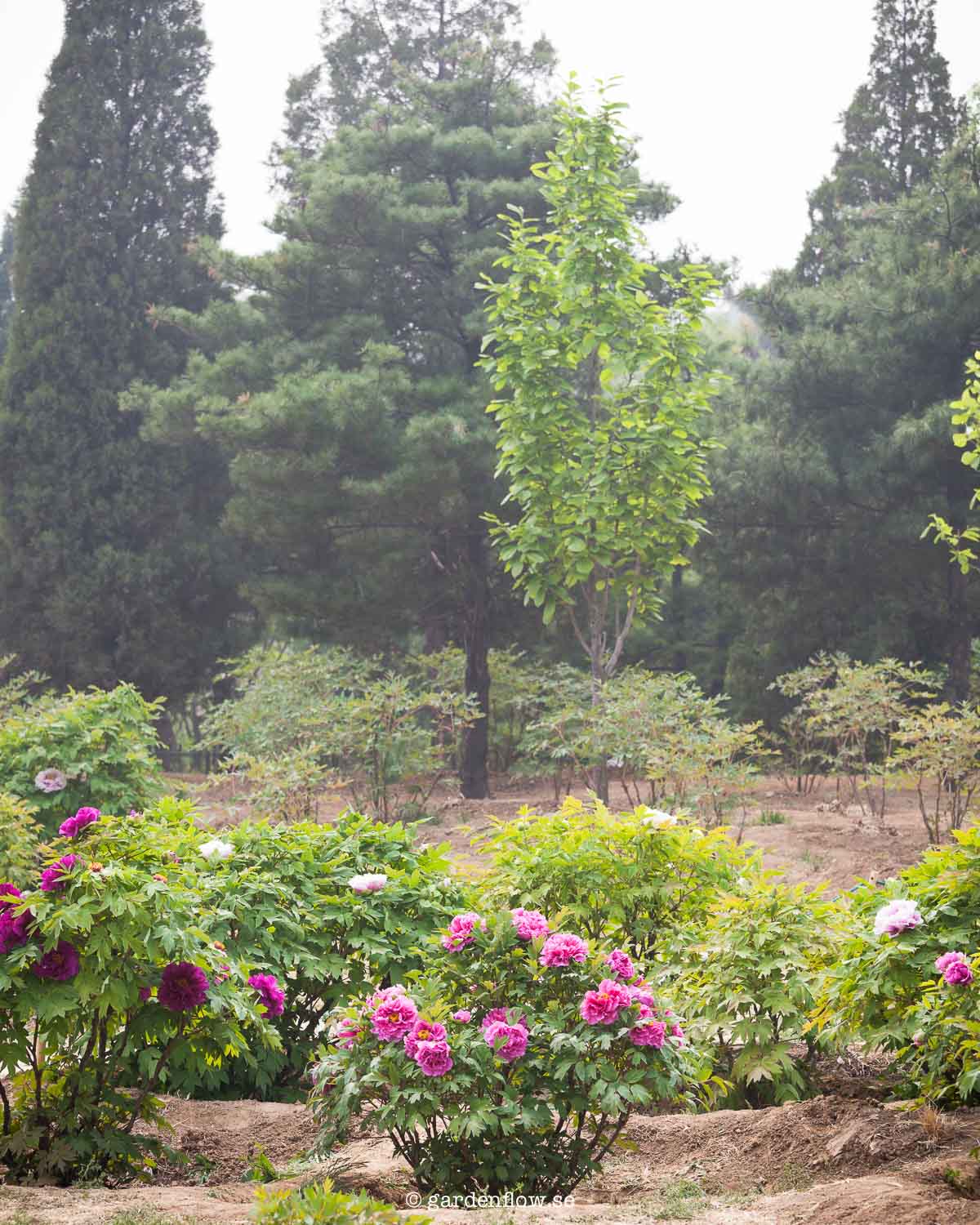 t is not that odd that the peonies were the main attraction when we were there since it was the time for their blooming but also since they have a special place culturally here. And it was of course not any kind of peony but the delightful and beautiful tree peony in white, créme yellow and the whole pink-red scale. The park had its own forest filled with thousands of tree peonies and also ‘ordinary’ peonies that had not started to bloom yet. I could have photographed them all but it was here that the patient family finally said stop. 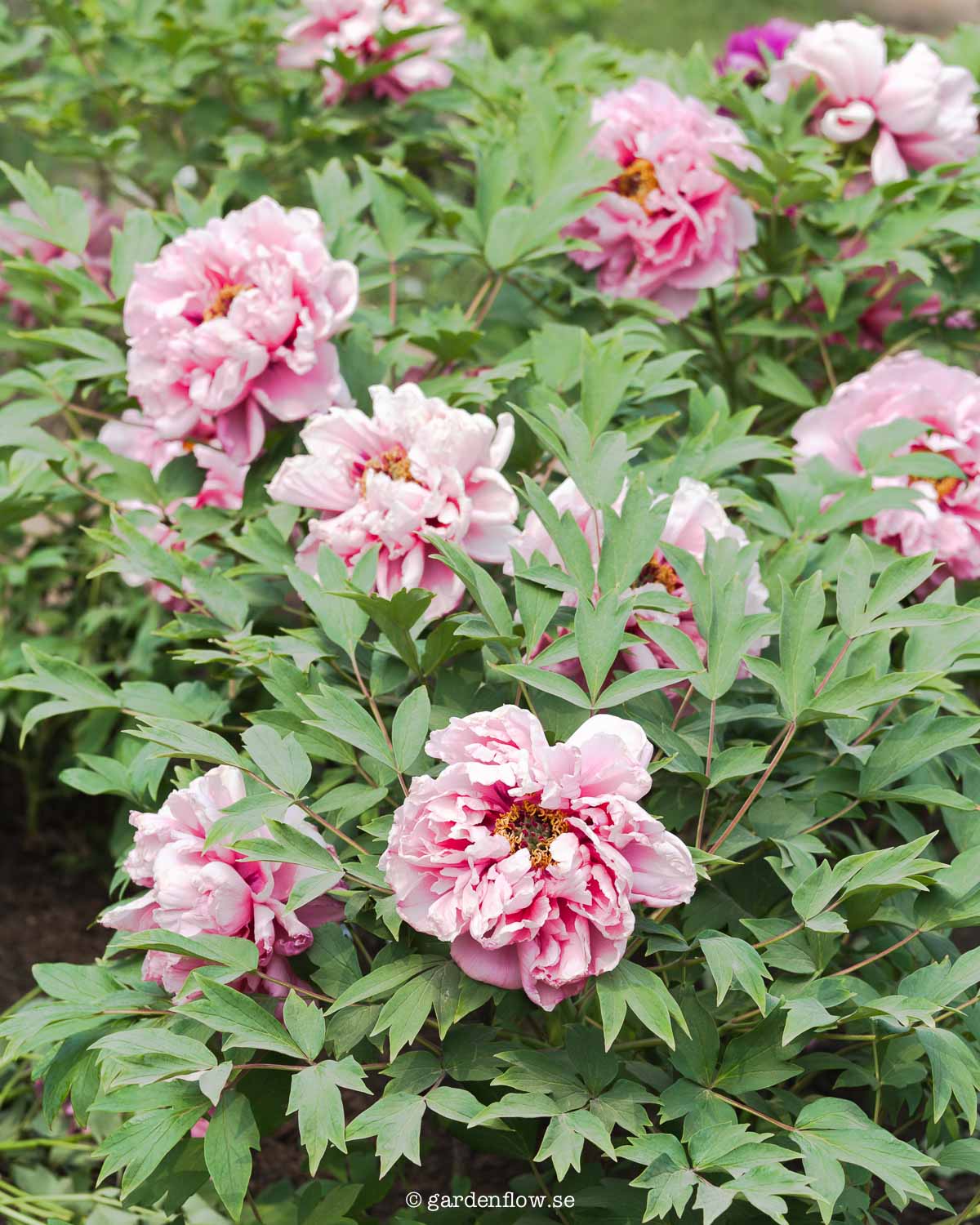 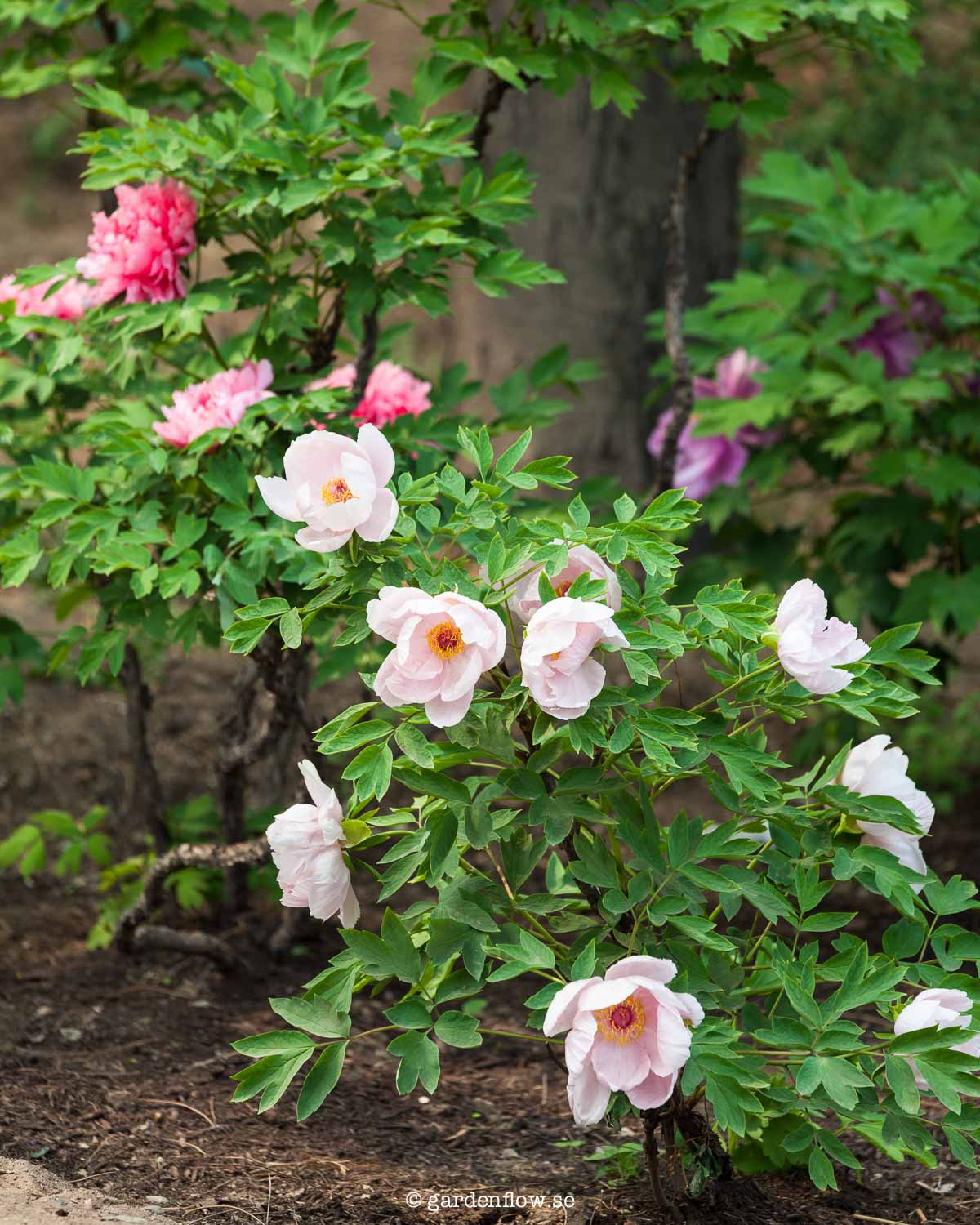 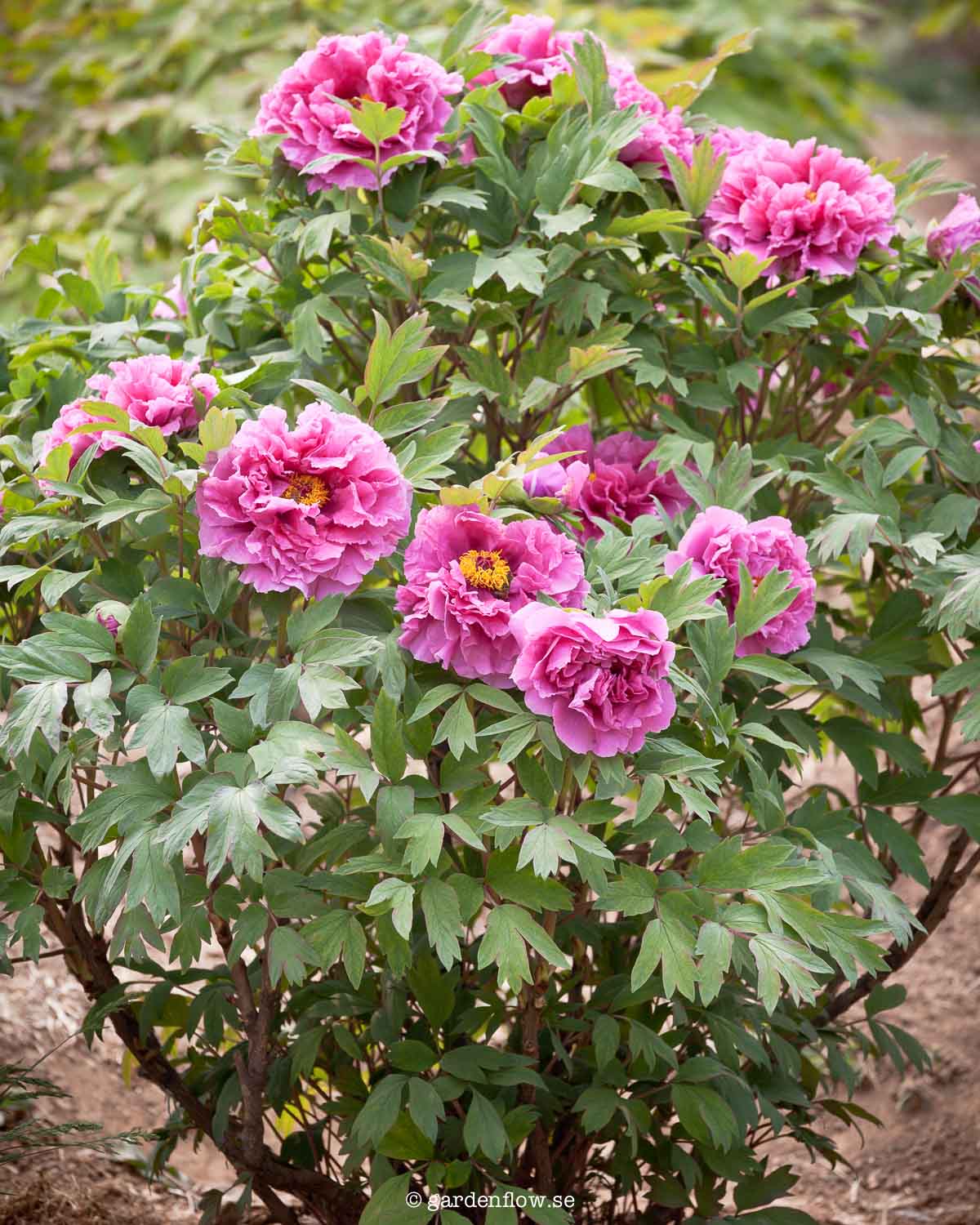 Apart from the tree peonies, the cherry trees were also in full bloom. It would have been magical to see the Magnolia in bloom but they had withered by the time we were there. The rose garden was in bud and it would have been exciting to see more parts of the garden if I’d had the time.

A revisit is high up on my wish list.
With unlimited time, a tripod and packed lunch.