When opportunity, a pinch of luck, a slumbering dream and two green souls meet, something like the Kniva Garden can emerge. 2½ years ago, when Andreas and André were in the process of moving from Stockholm, there was a pull from the area around Falun where André comes from. You would think it was André that was the driving force but actually it was Andreas from Stockholm who made them look towards Dalarna (a rural province in central Sweden) and a life outside the Capital city. In the house listing there was a side building described as a shed. Their jaws dropped at the viewing when they saw that it was actually an old general store. They bought the house and it did not take long after they had moved until the Kniva Garden opened its doors. Only 3 months. 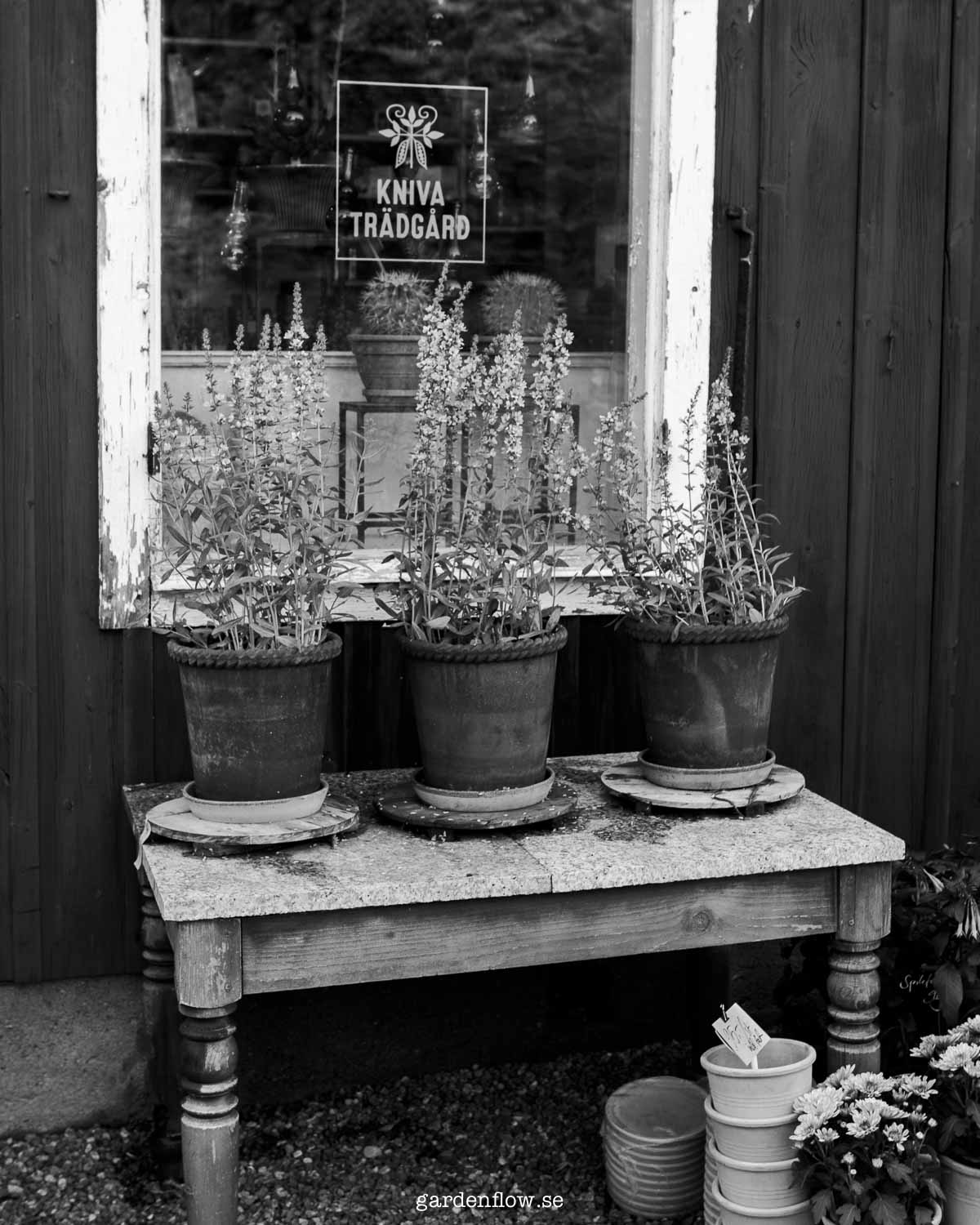 André, who is both a gardener and a Culture environment specialist, a lot of people know from ‘Allt om trädgård’ (a Swedish gardening magazine) where he wrote ‘Handboken’ (the handbook) with practical instructions about gardens. The pages that later resulted in the book  ‘ Odlarens handbok’ (the growers handbook) that was awarded with Årets trädgårdsbok 2012 ( Garden book of the year 2012). André has also written the book ‘Trägårdsmästarens anteckningar’ (The gardeners notes) which is a personal garden book with anecdotes, thoughts and experiences. It is all written with a big portion of humility, curiosity and love for the earth, life and historical connection. As a professional gardener André describes himself as primarily a writing one since a few years back. 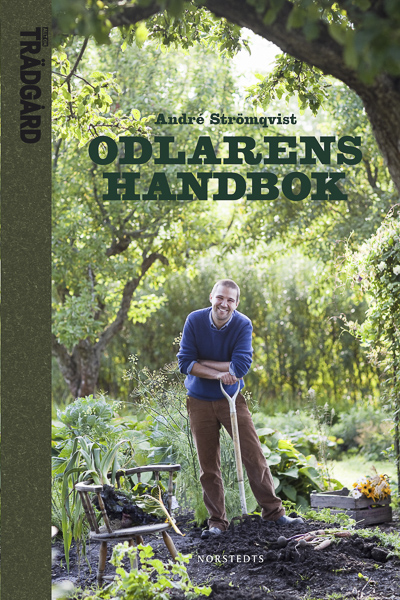 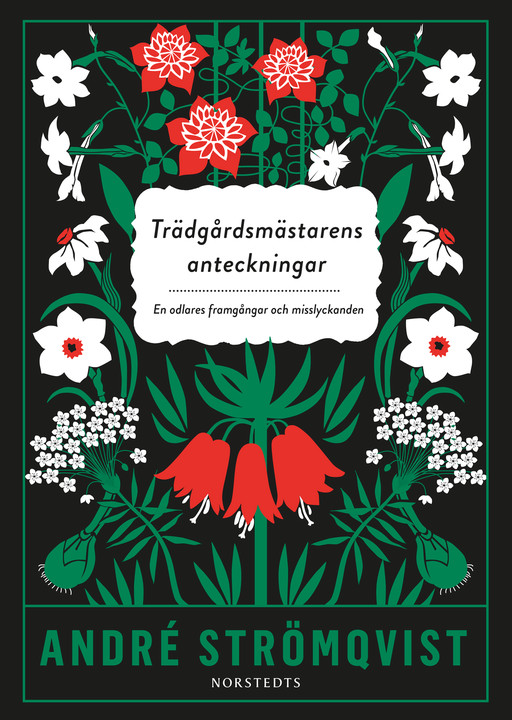 Gardens and the historical connection

The interest for gardens was triggered already when he was little and it resulted in both education and later work at among other places the Bergian Garden and Rosendals Garden. After a few years André realised that he wanted to keep the practical part of gardening as a private interest instead of having it as the main part of his job. His gaze shifted towards heritage, which has been as big an interest for him as gardening. He tells stories about how he had got his parents to stop by old churches when they where out driving so that he could take a closer look. They could not fully understand what he was interested by. André’s interest for the historical context brought him to become a building curator and a master’s degree in arts. Today André works mostly as an environmental heritage specialist where he establishes care plans for heritage valuable environments, mostly parks and gardens but also buildings. I ask if he has come across some really exciting situations or discoveries on his projects and André tells me about a few occasions where he got to hold unique original documents that royalty and other greats had been involved in.

I feel a little like Indiana Jones when I’m stepping round the spinach looking for leavings from gardens from other times. 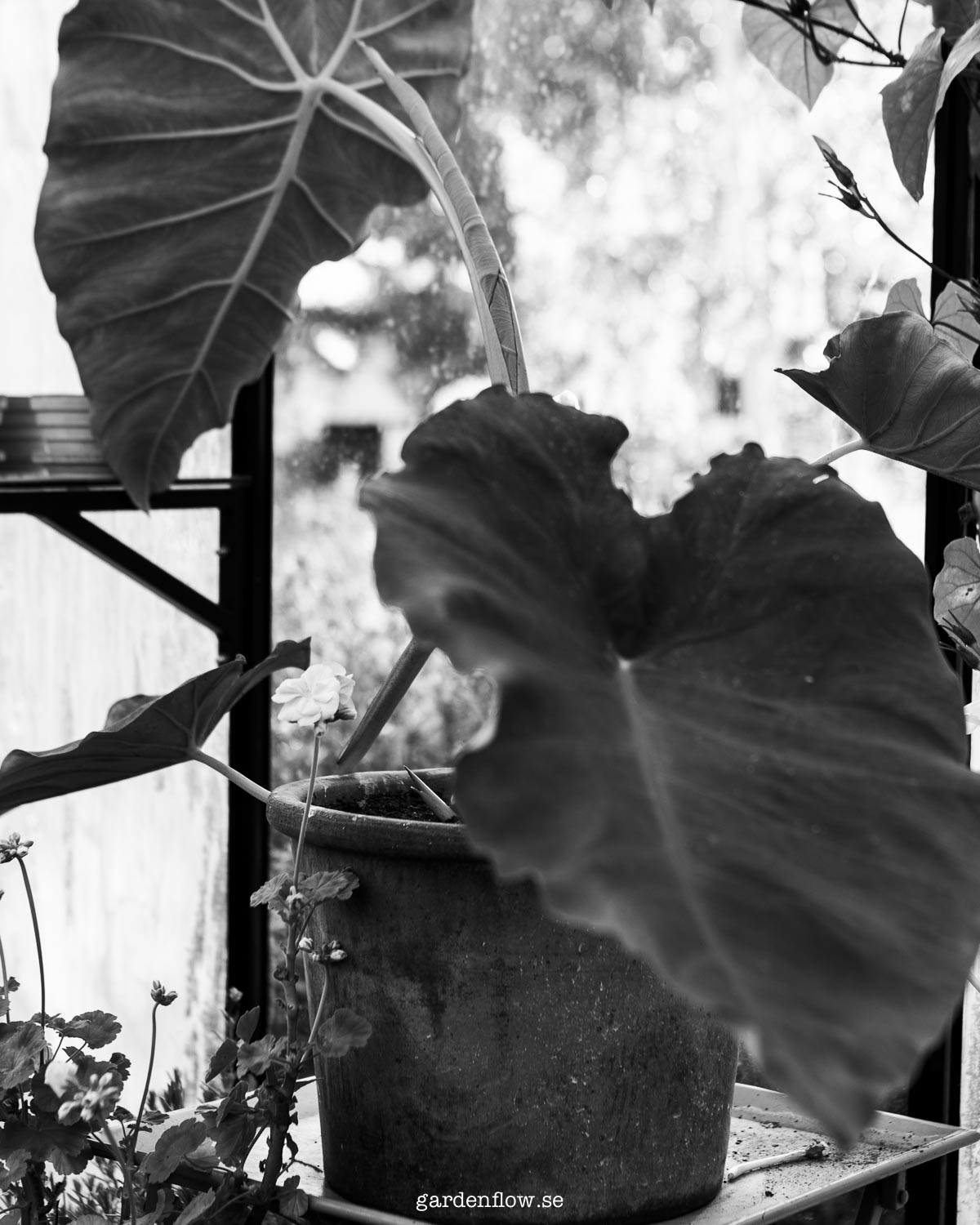 In his grandparent’s garden, where Andreas was taught to sow and harvest vegetables as a child, cultivating took a hold on him, even if it was not conscious then. It took a few years after college before he made the decision and joined the gardening education at Capellagården on Öland, with emphasis on fruit and vegetable growing. There and then Andreas knew he was in the right place and that he wanted to work with gardens. After his time at Öland he went on to a craft school in Mariestad for a few years to study advanced gardening with great focus on colours and shapes. Once back to Stockholm it did not take long until Andreas got the job as head gardener at Näsuddens nursery on Dalarö. A small but great nursery where Andreas stayed for ten years and got the opportunity to develop his creative side since one of his tasks was to make flower arrangements for the owners houses and events. As a florist Andreas describes himself as one that makes naturalistic creations where the shapes are natural, free and with an airy impression. When prince Carl Philip got married to Sofia, Andreas was part of the team that decorated the church and party with flower arrangements.

I get a kick out of surprising and to use unexpected materials. It can be everyday material.

In 2013 Näsudden participated with an idea garden at Nordiska Trädgårdar, an idea garden that Andreas designed and build. It got a well-deserved first prize. I had my own stand that year for the Garden Flow shop and I actually had Andreas and his garden as neighbours. For a few years now, Andreas has been part of the jury who judges the idea gardens, balconies and stands at the fair Nordiska trädgårdar. 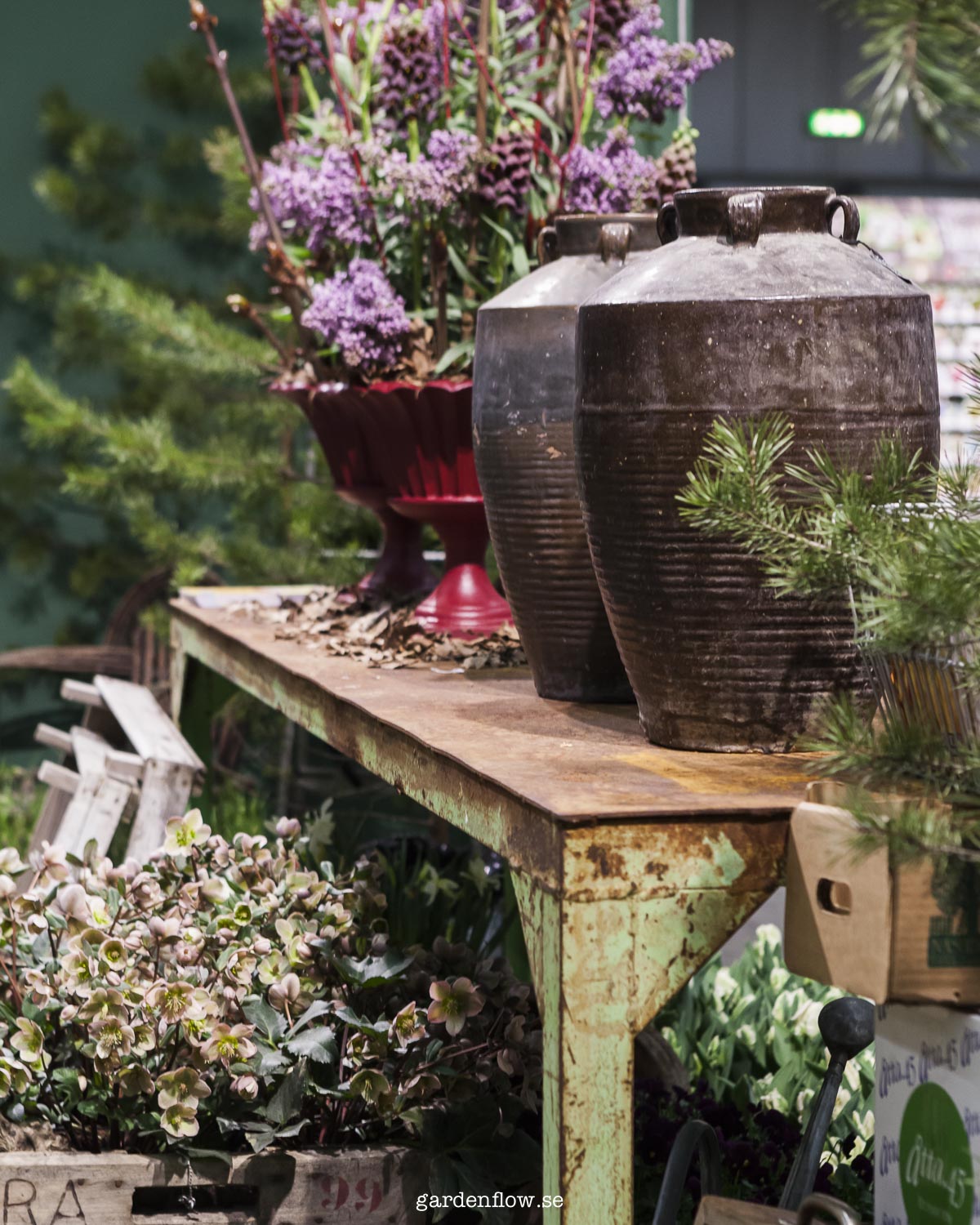 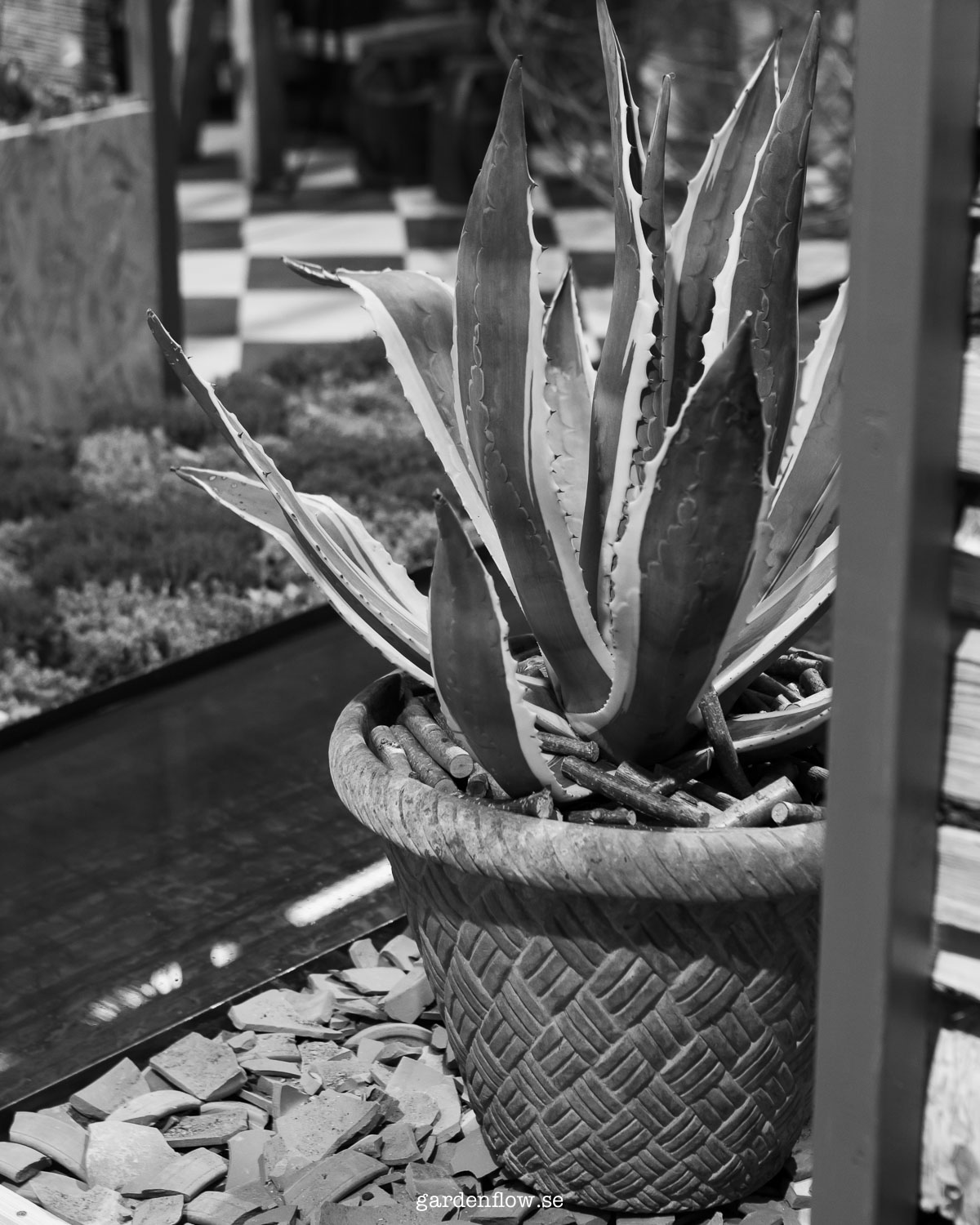 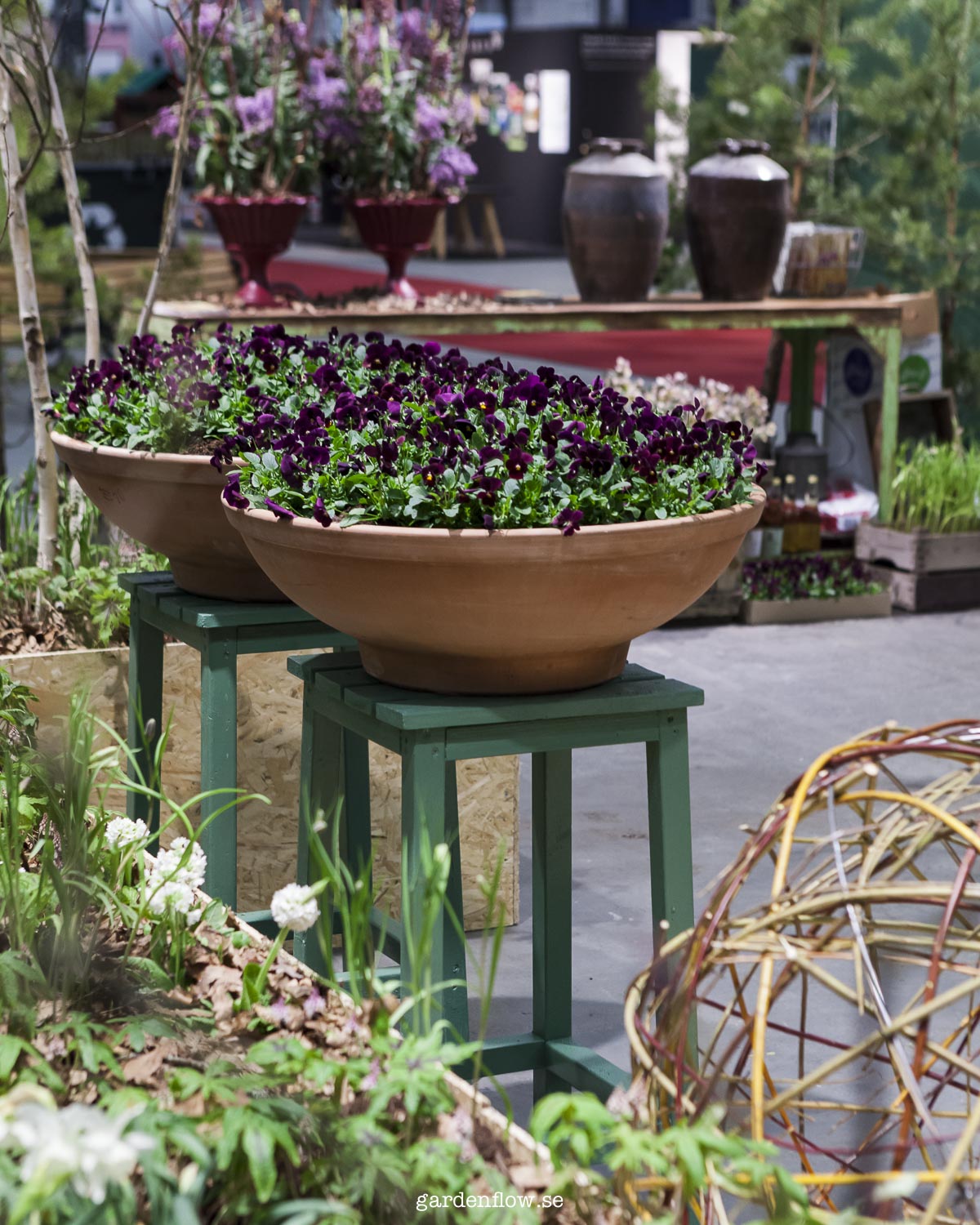 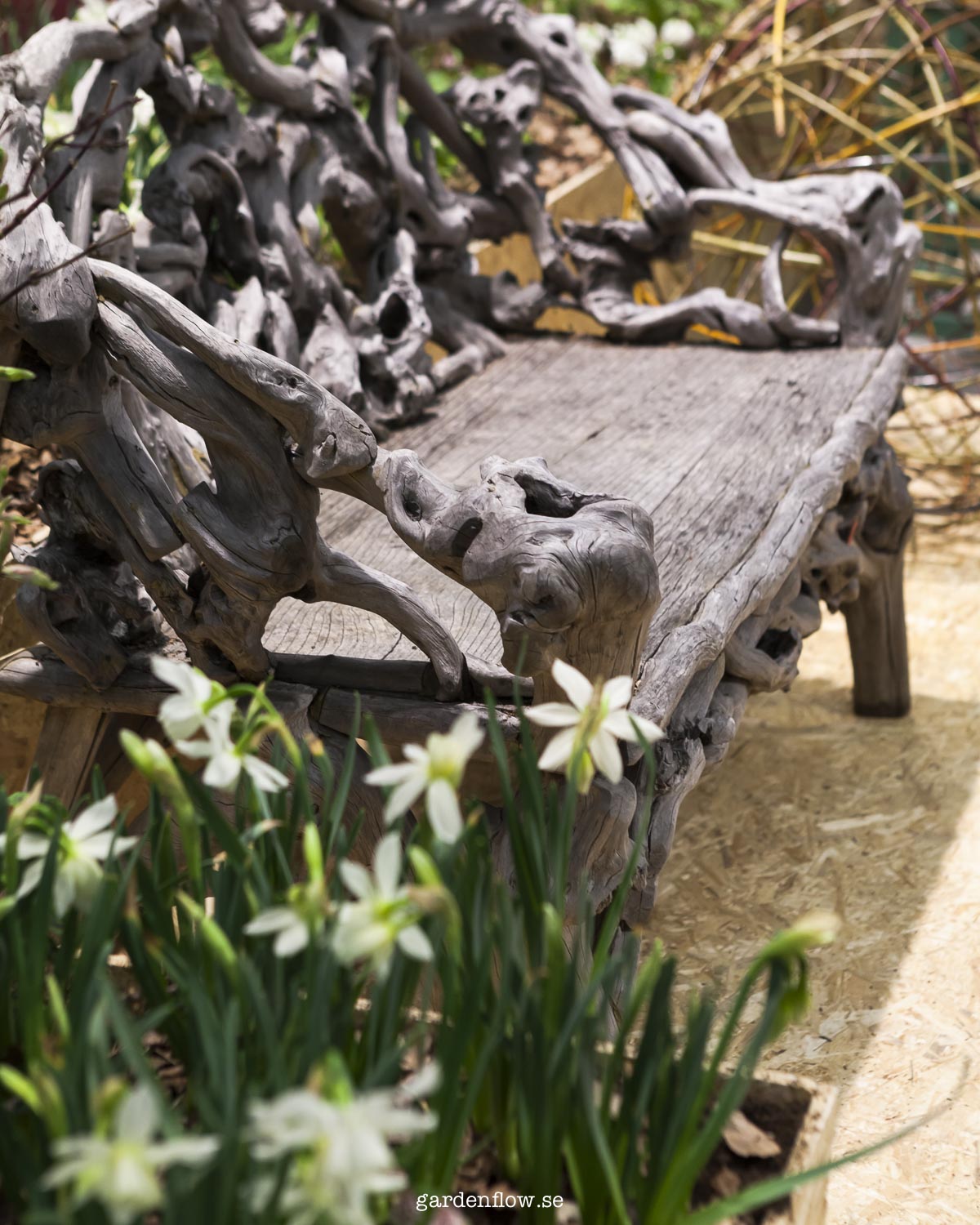 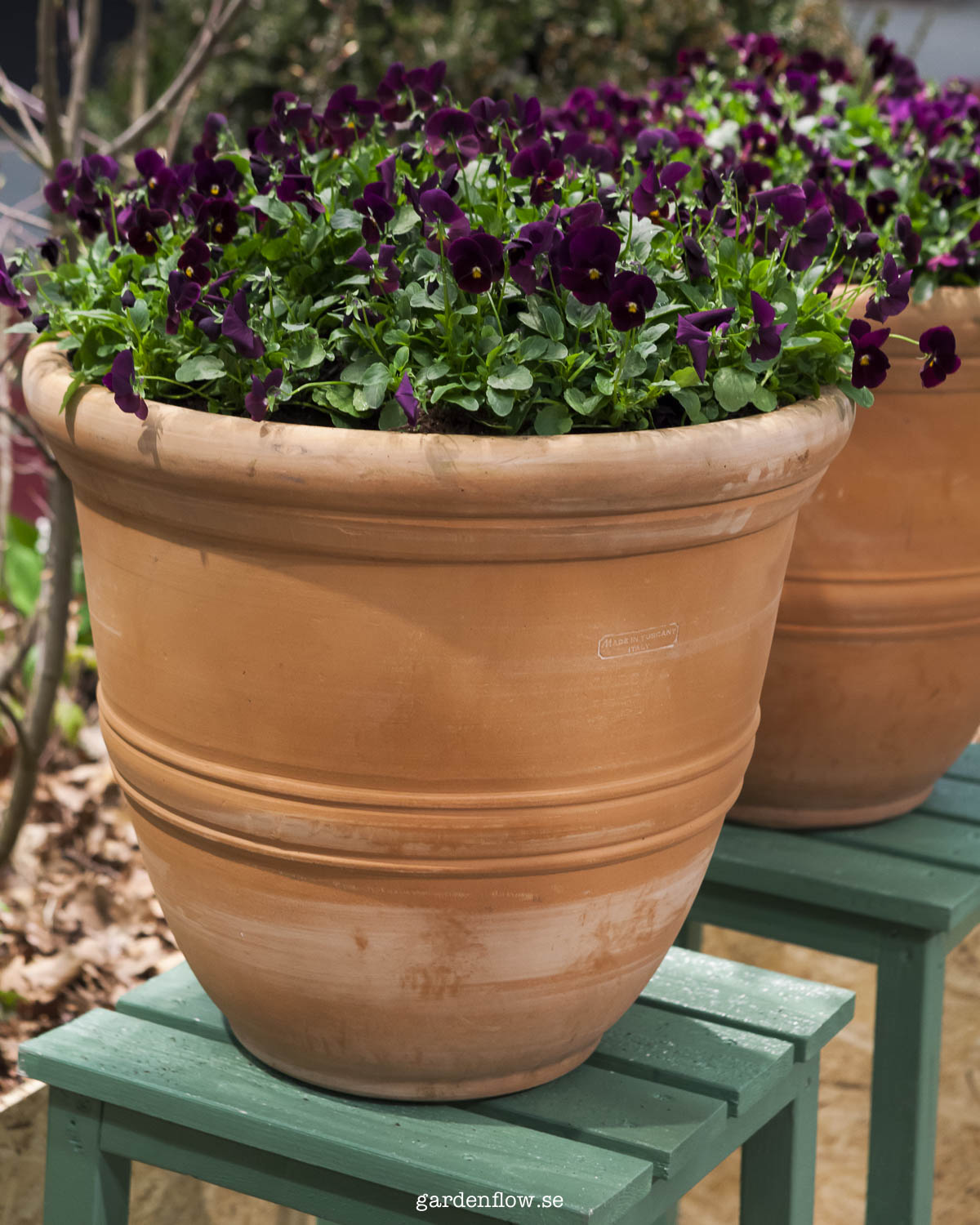 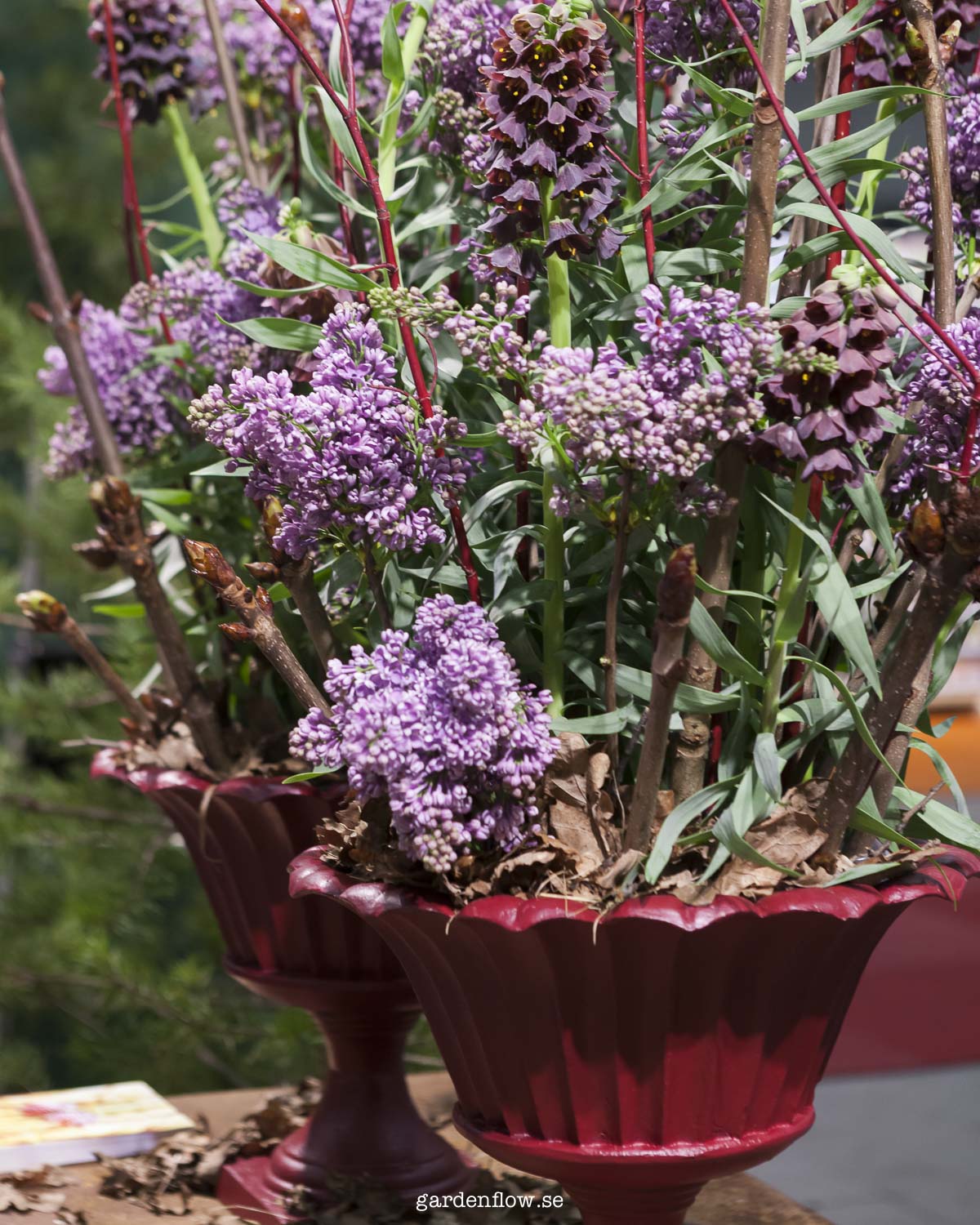 Not only floral creations 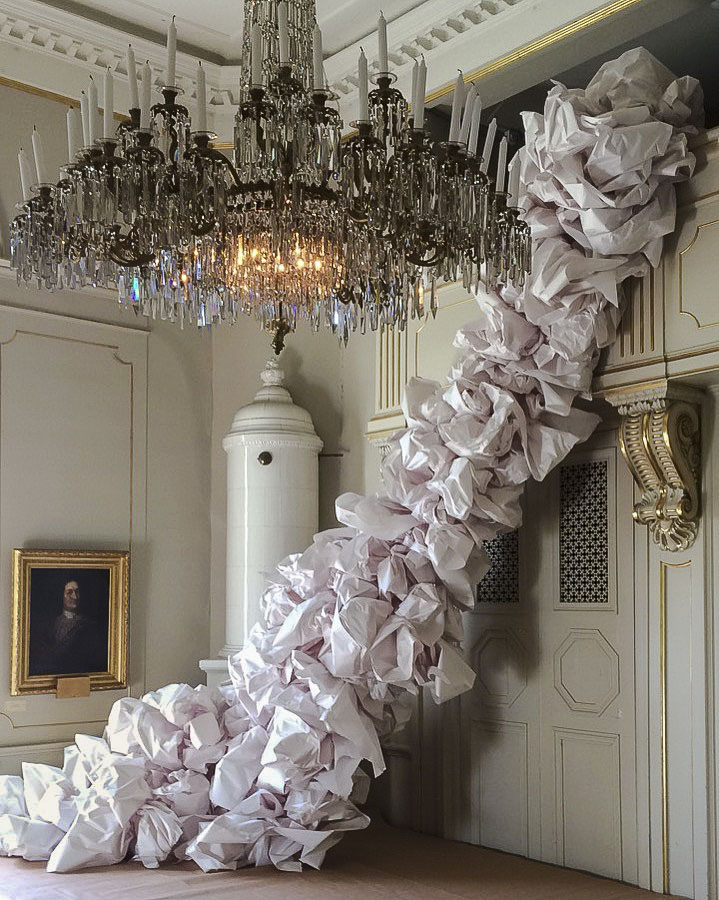 A fun assignment that Andreas has had the last few years is also to create the decorations for the Ljunbers foundation and the festivities around the yearly scholarship awards. An assignment that has given him free hands to work with a theme. Last years theme was woodland and this years was paper, which meant that 2017’s decorations had no live plants at all. Andreas solved it marvellously by creating a garland shaped like a fluffy skirt that emerged out through the wall and crawled round from the floor up to a balcony (the garland was longer than can be seen in the photo). Incredibly effective, especially the way it was lit up the night of festivities.  I get curious about the construction and ask how all the parts are connected. Andreas answers that wire and a few poles was what was needed. And a few hours. I’m feeling that a free-thinking, creative mind to even come to think of the idea to begin with is crucial as well.

The old general store in Kniva

The old general store has its original inventory, even the cool counter. The only thing that has been renovated since they took over is the floor. Underneath a worn linoleum carpet with traces of old sill (pickled herring) barrels, was a beautiful old wooden floor that has been revealed. Furniture from the right era has been moved in to the store to complement what was already there and it does truly feel like stepping in to a time machine when you reach the top step and go through the double doors of the store. Kniva garden is something André and Andreas do together but Andreas has the final responsibility. On the old shelves sit chosen pots, vases, soaps and candleholders. The tools are leaned onto the counter and you can find watering cans here and there. A preference toward the English can be spotted but also towards timeless and traditional design. A sense of quality permeates everything about the old general store that nowadays can be called a garden centre instead. 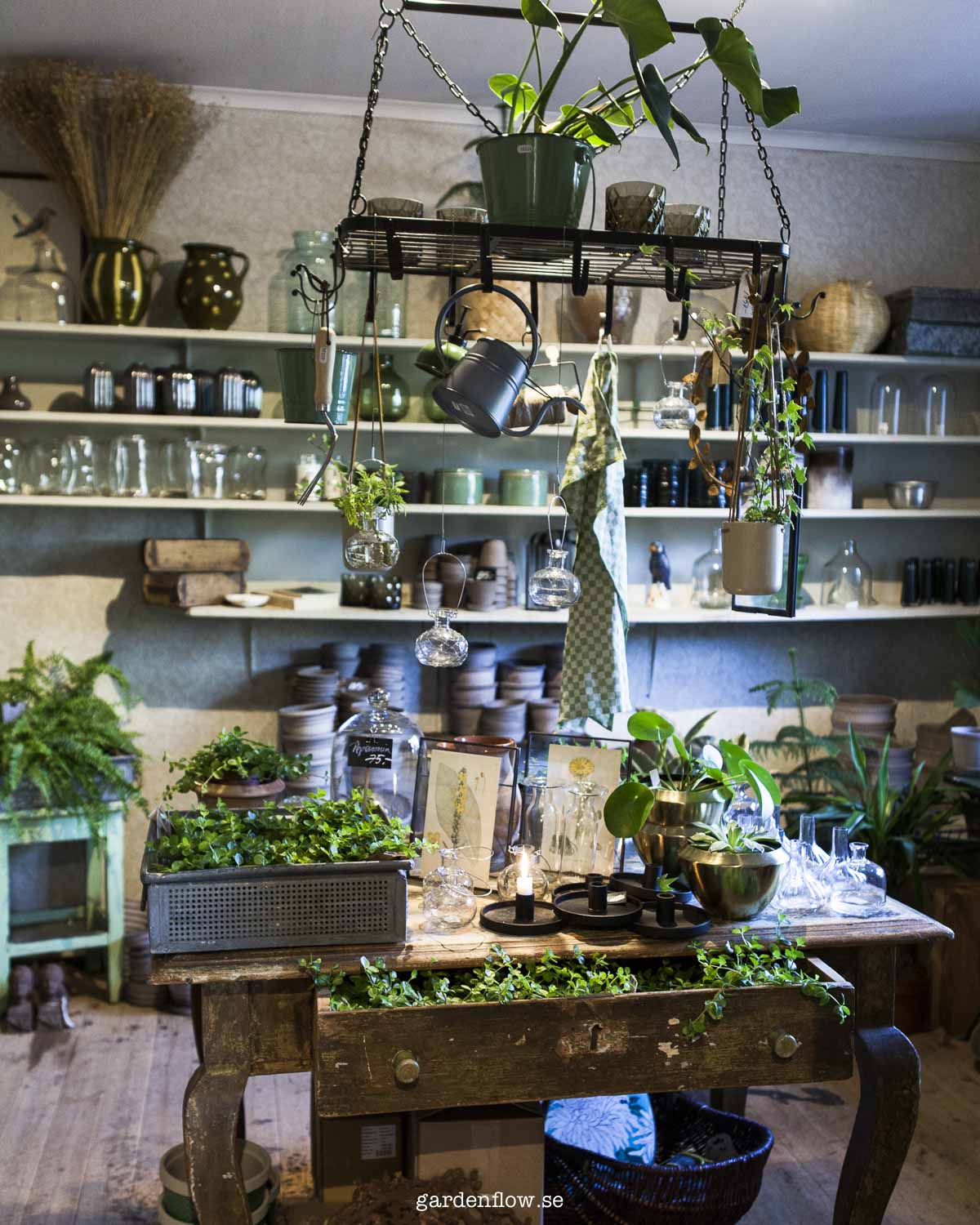 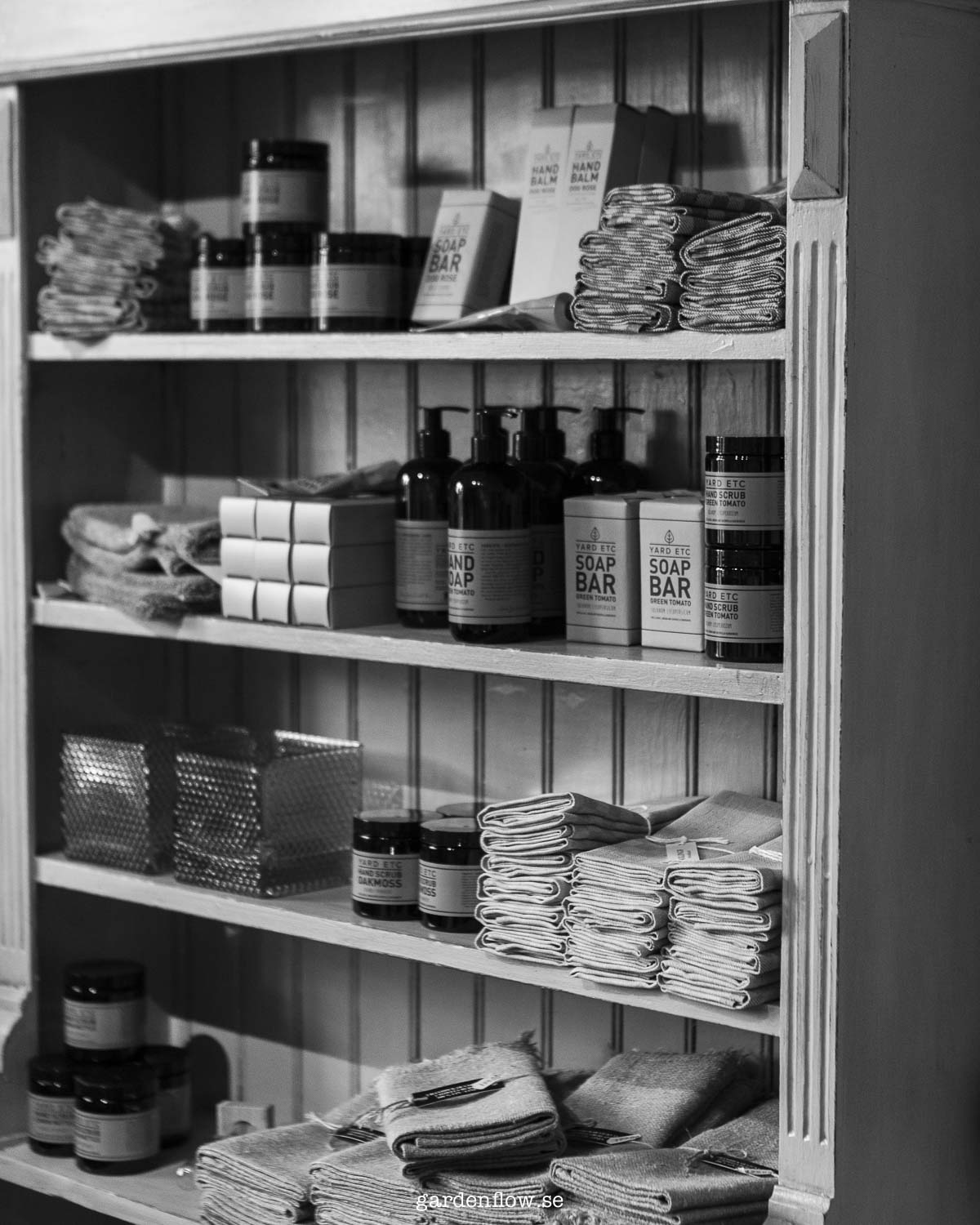 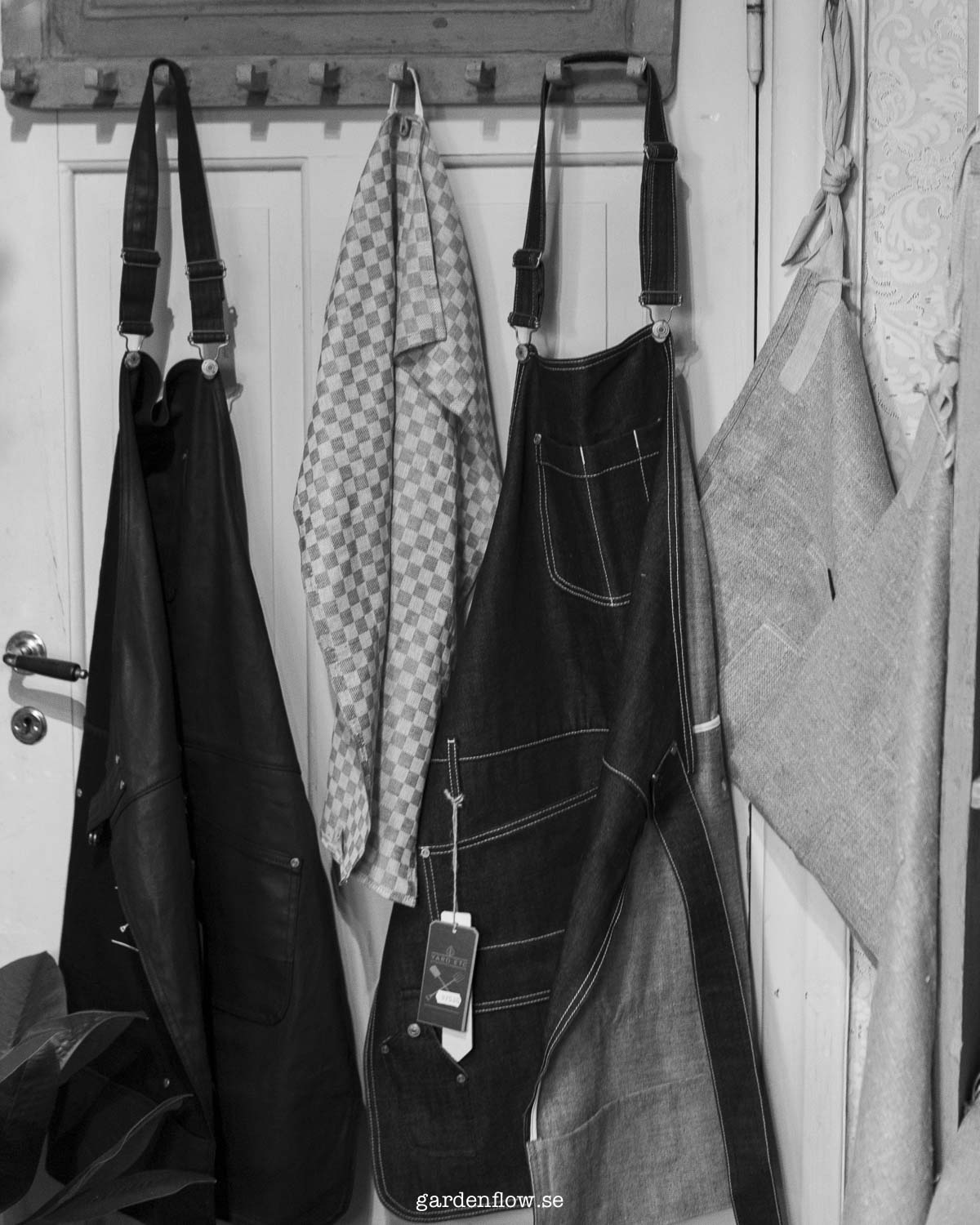 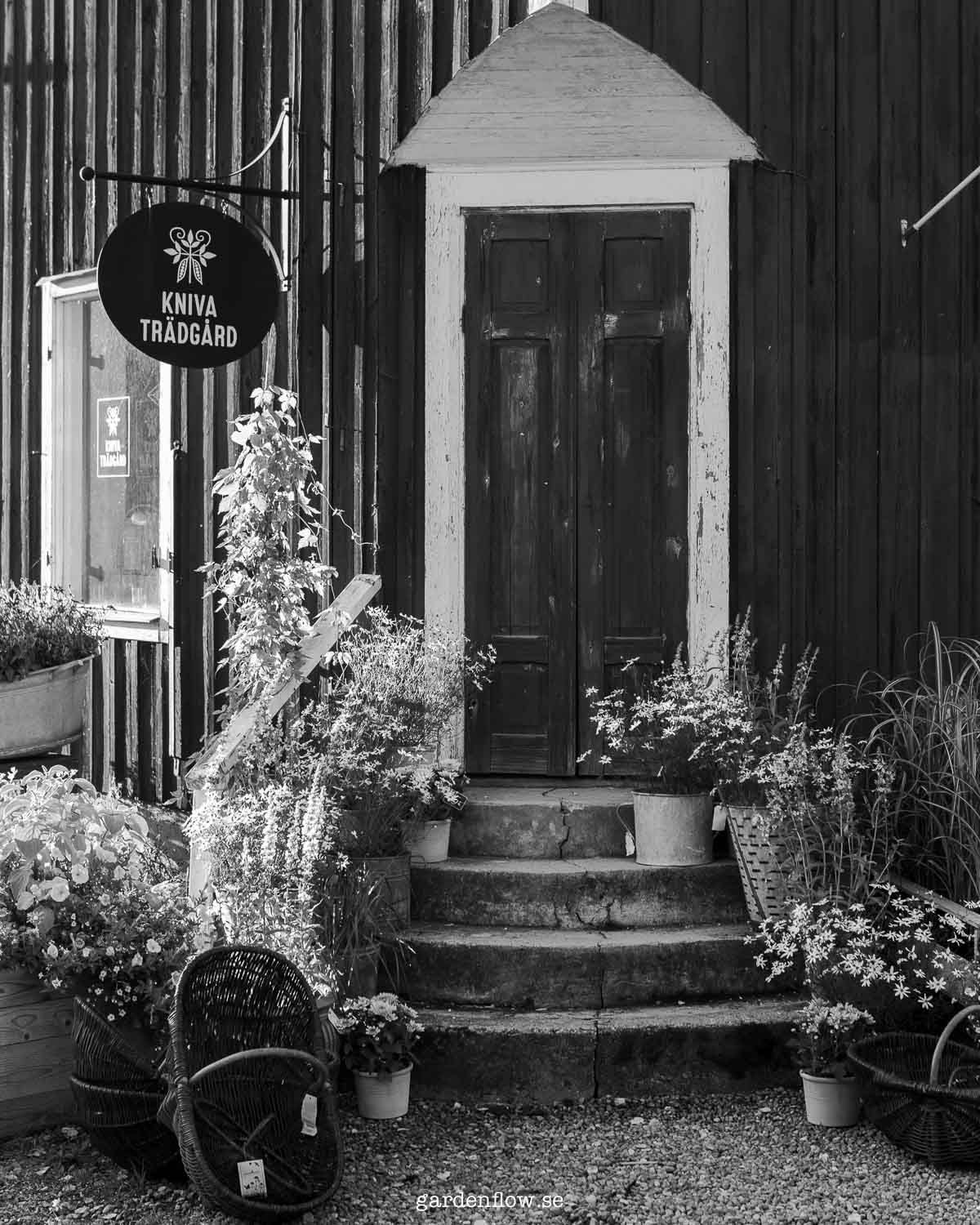 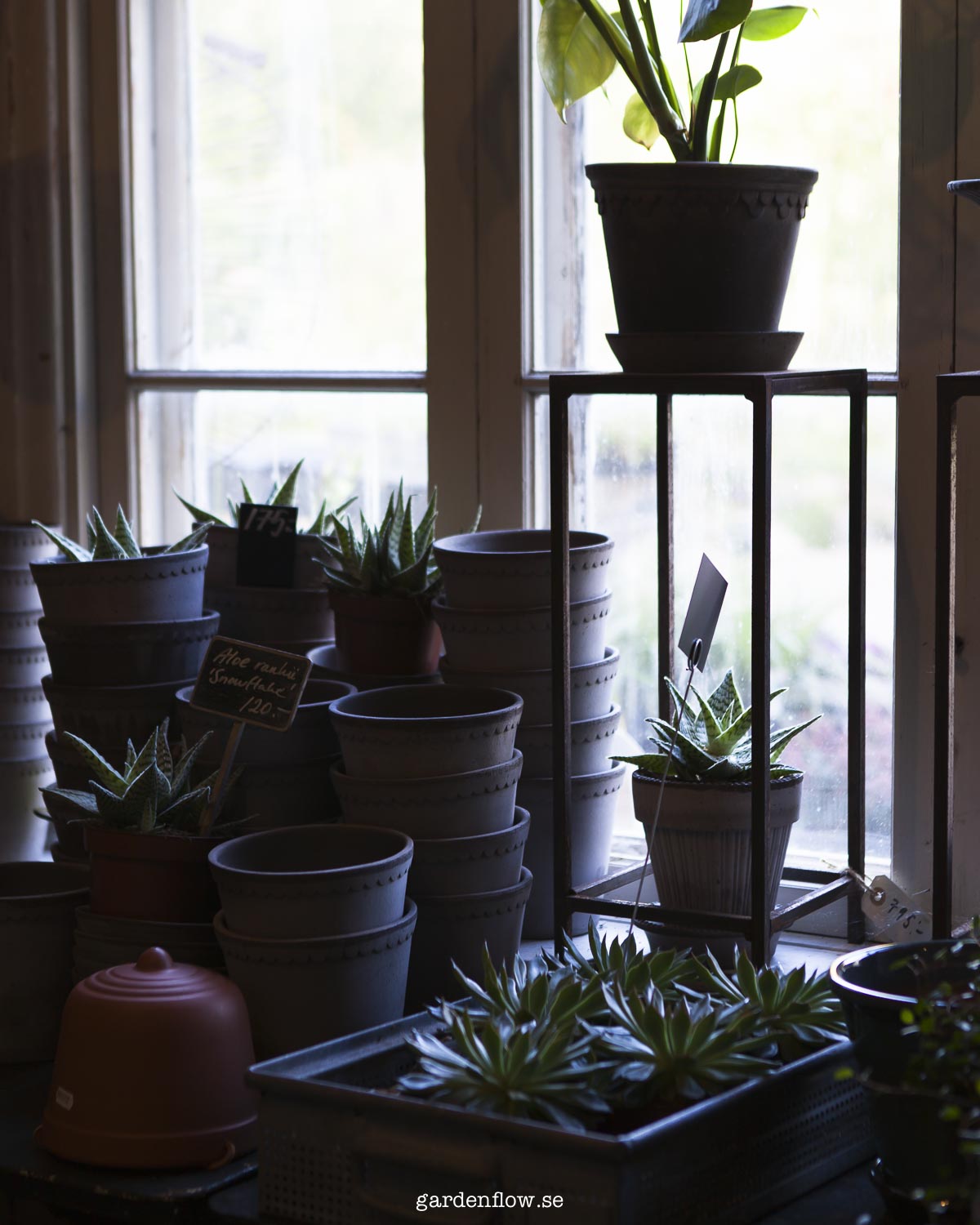 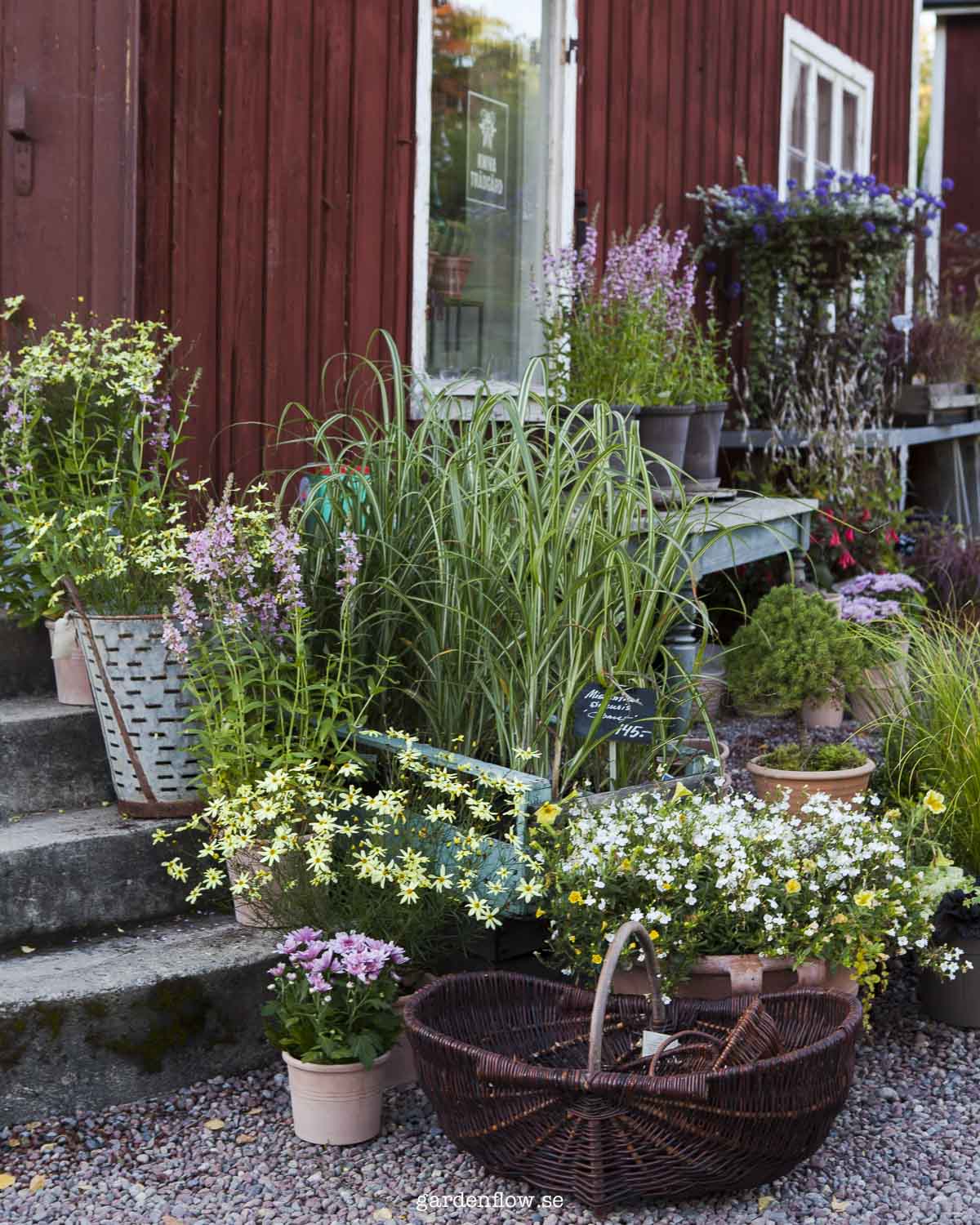 Kniva garden has become a famous phenomenon in a short amount of time and even long distance visitors find their way here. If you want a signed copy of André’s books, you can. If you want advice and pointers from Andreas then he is available. A & A put their very own touch on Kniva garden that stands out. They do this together, like many other things. They like what they do and it shows. It gladdens me deep inside to get a glimpse of the passion and dedication that exists here. 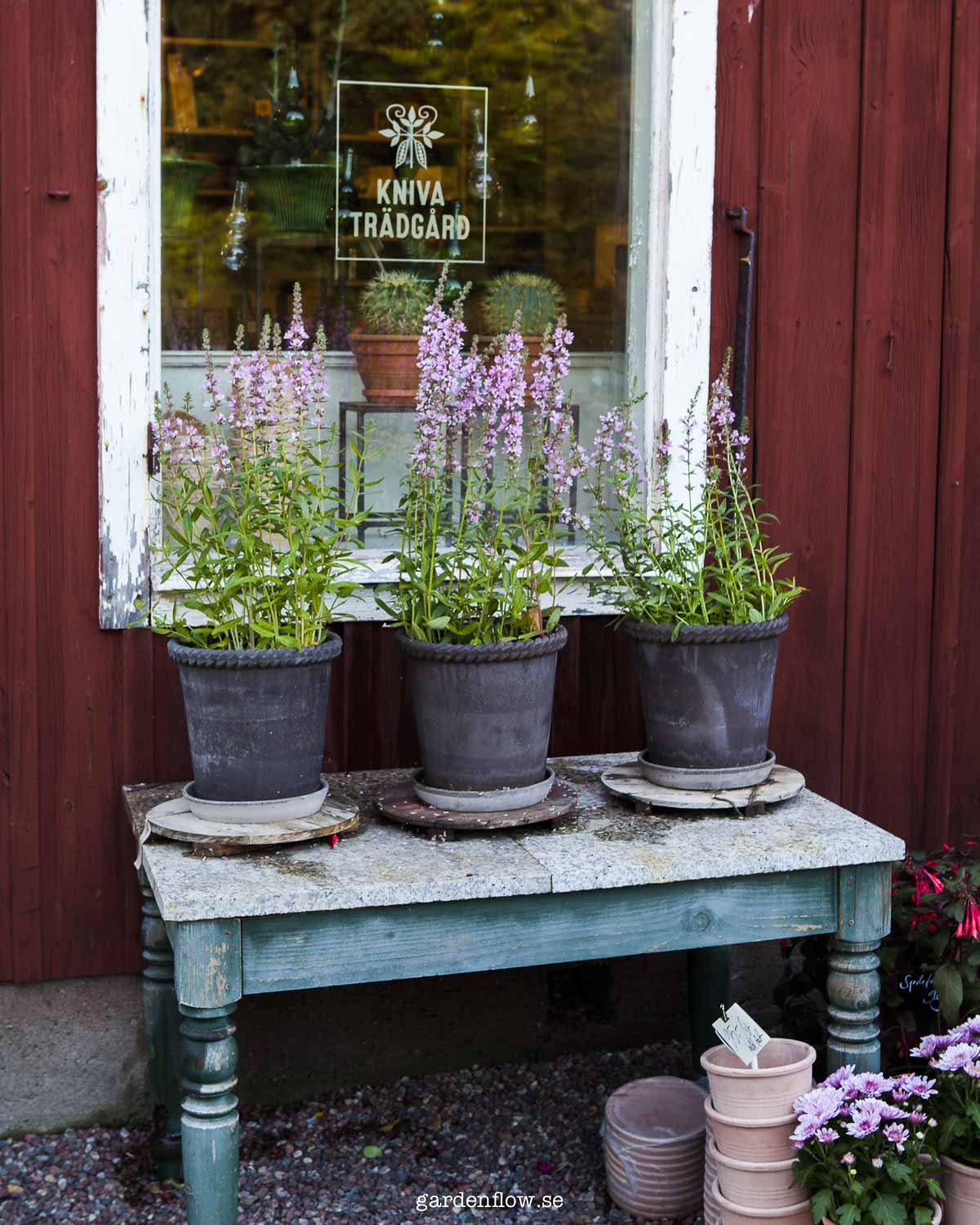 So far there is still some secrecy around it, but the couple are co-writing a book to be released in the beginning of next year. A book about the move to Kniva and the journey they have taken with Kniva garden. The fact that they dare to start a garden centre in a small village in Dalarna, but also a gardening book where we get to come along in to the life in the garden in Kniva and their personal relationship with plants and life with a garden with facts about the herb garden, vegetables and plant groups amongst other things. Apart from the co-written book you can also find A & A in the magazine ‘Allt Om Trädgård’ on a regular basis, where they write about relevant seasonal chores.  It is visible that they both appreciate colourful and blooming plants. In the flowerbeds stand armfuls of dahlias and here and there unusual alliums are seen. In pots you can find summer flowers and flowering perennials. A preference for the flowering also shows in the types of plants they sell. Flowers for a colourful flower arrangement in a pot or in a flowerbed are easy to find here. 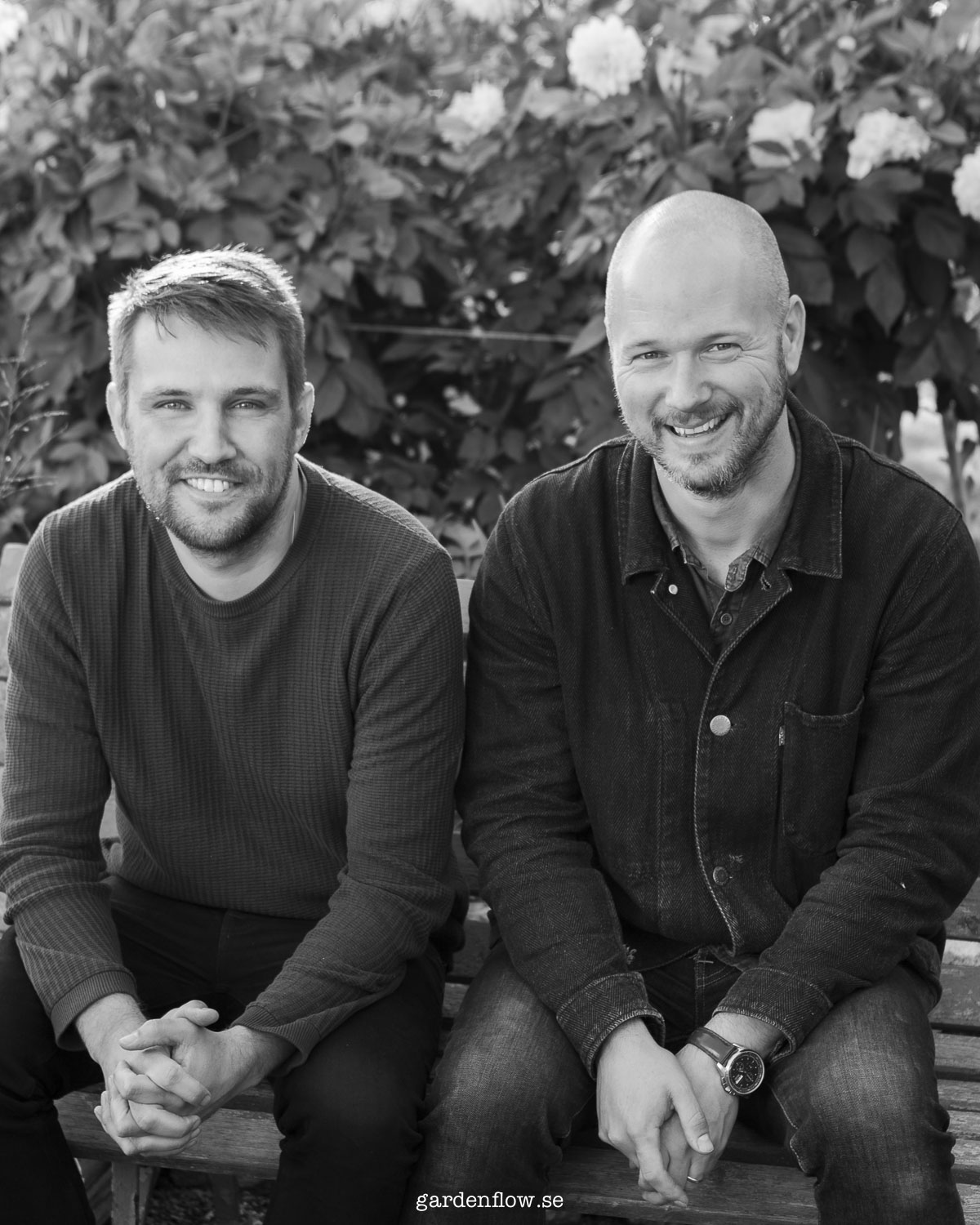 In the flowerbeds stand armfuls of dahlias and here and there unusual alliums are seen. In pots you can find summer flowers and flowering perennials. A preference for the flowering also shows in the types of plants they sell. Flowers for a colourful flower arrangement in a pot or in a flowerbed are easy to find here. 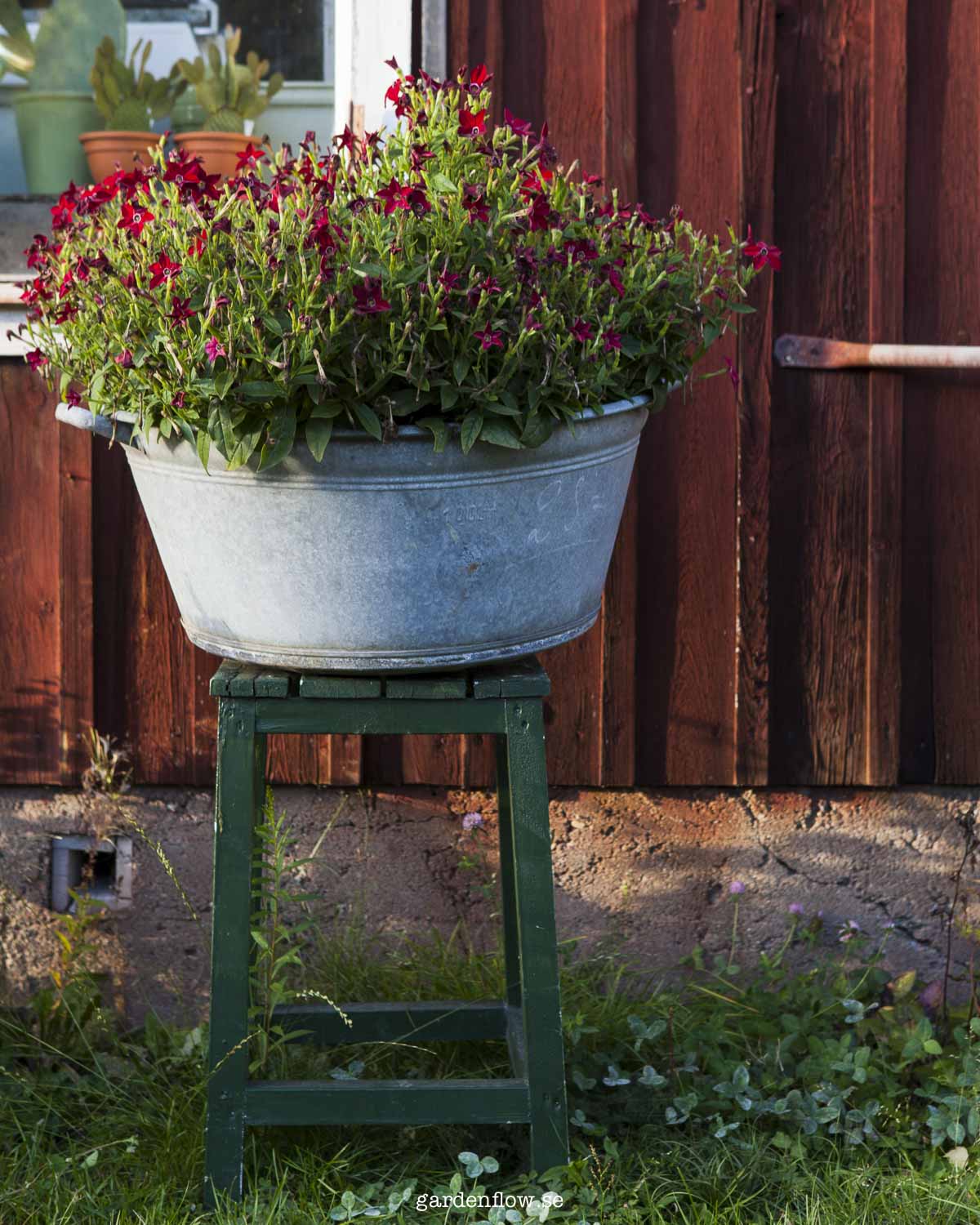 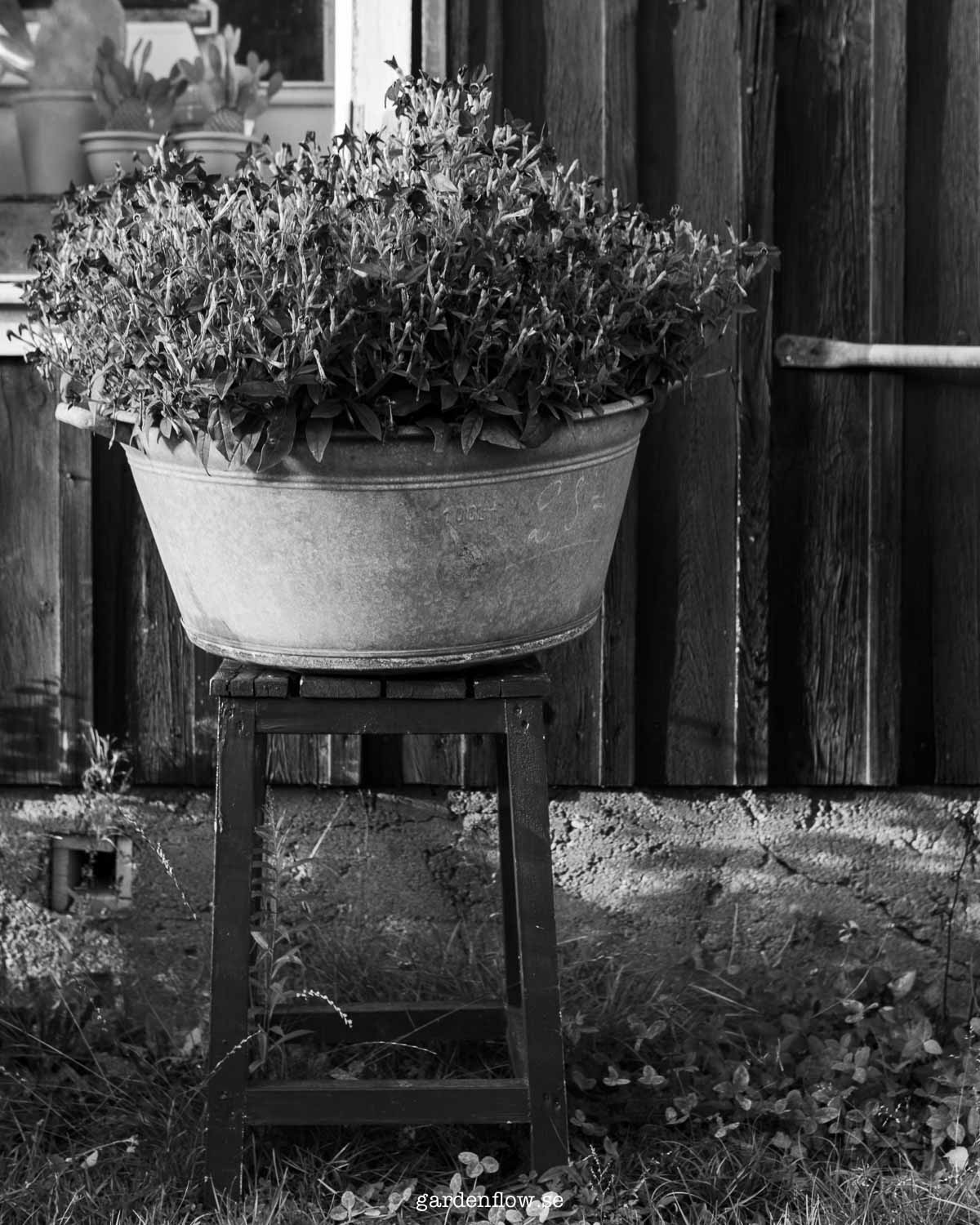 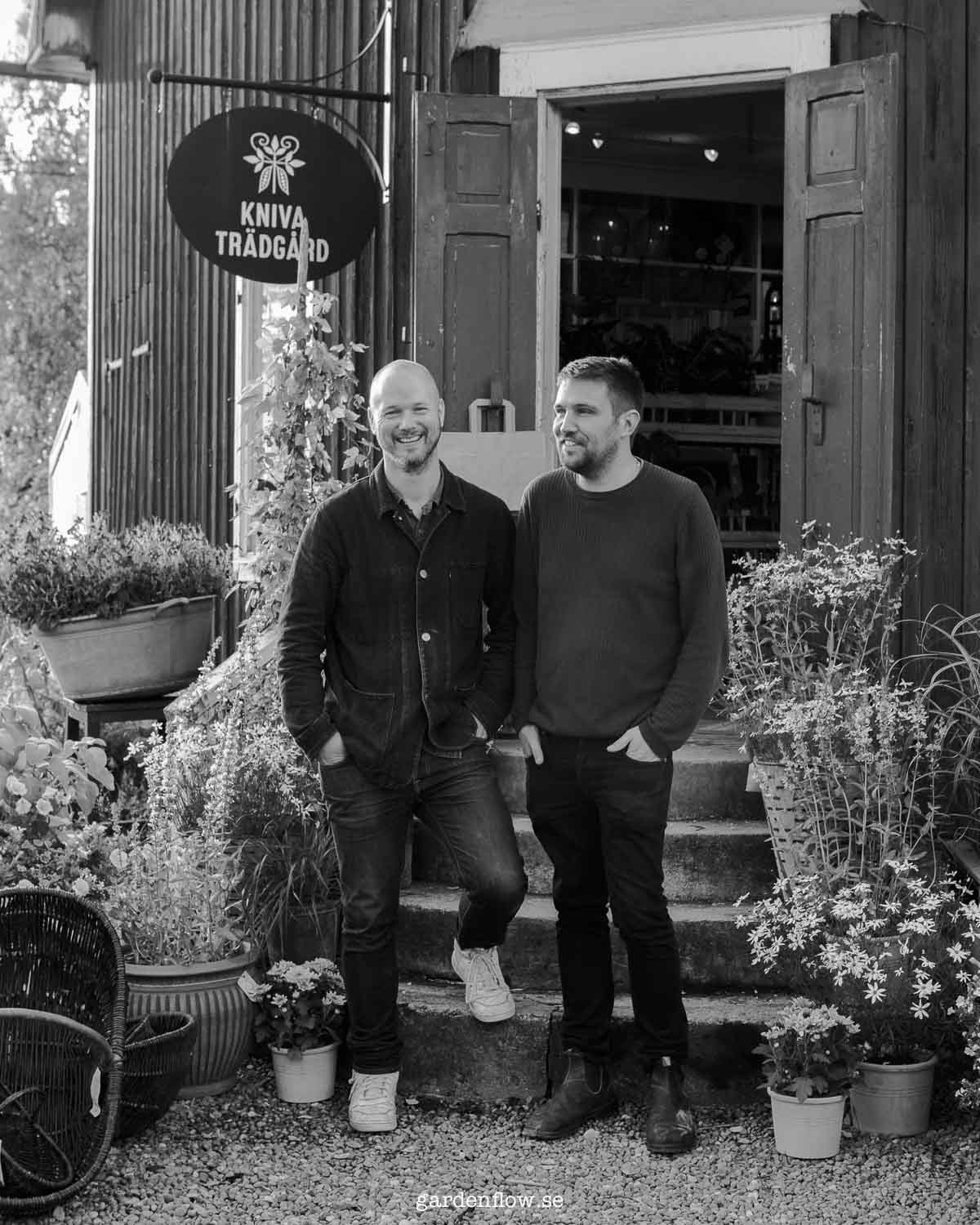 André about Narcissi
Historical narcissi are my absolute spring bulb favourite, they are so graceful.

Andreas about André’s collecting
Soon we will have the national epiphyllum collection at home, it takes a lot of space to live with a plant collector.

André about winter
I actually like the winter because during the break you build up a garden withdrawal that makes gardening more fun at springtime.

Andreas about growing in zone 4-5
I am learning what can grow in zone 4-5 but really there is very little that you have to leave out, often we have a beneficial cover of snow for the sensitive perennials.

A greenhouse has been procured to prolong the season and to give the possibility to raise their own plants. I ask about their plans for the garden. The ground is rocky in the whole area so it is not the simplest place to build a garden here. Even for the smallest bed it is necessary to use a digger to clear the ground of stones. One solution that they have started to use is to build up borders instead, which they have done in several places. Next there are plans on a woodland but as André says ‘ It is not something that you start and do just because you fancy to, it takes planning and forethought. It literally sounds ‘clang’ whenever a spade is put into the ground’. The stones that have been dug up so far have been beautifully reused as parts of the walls on the built up borders. 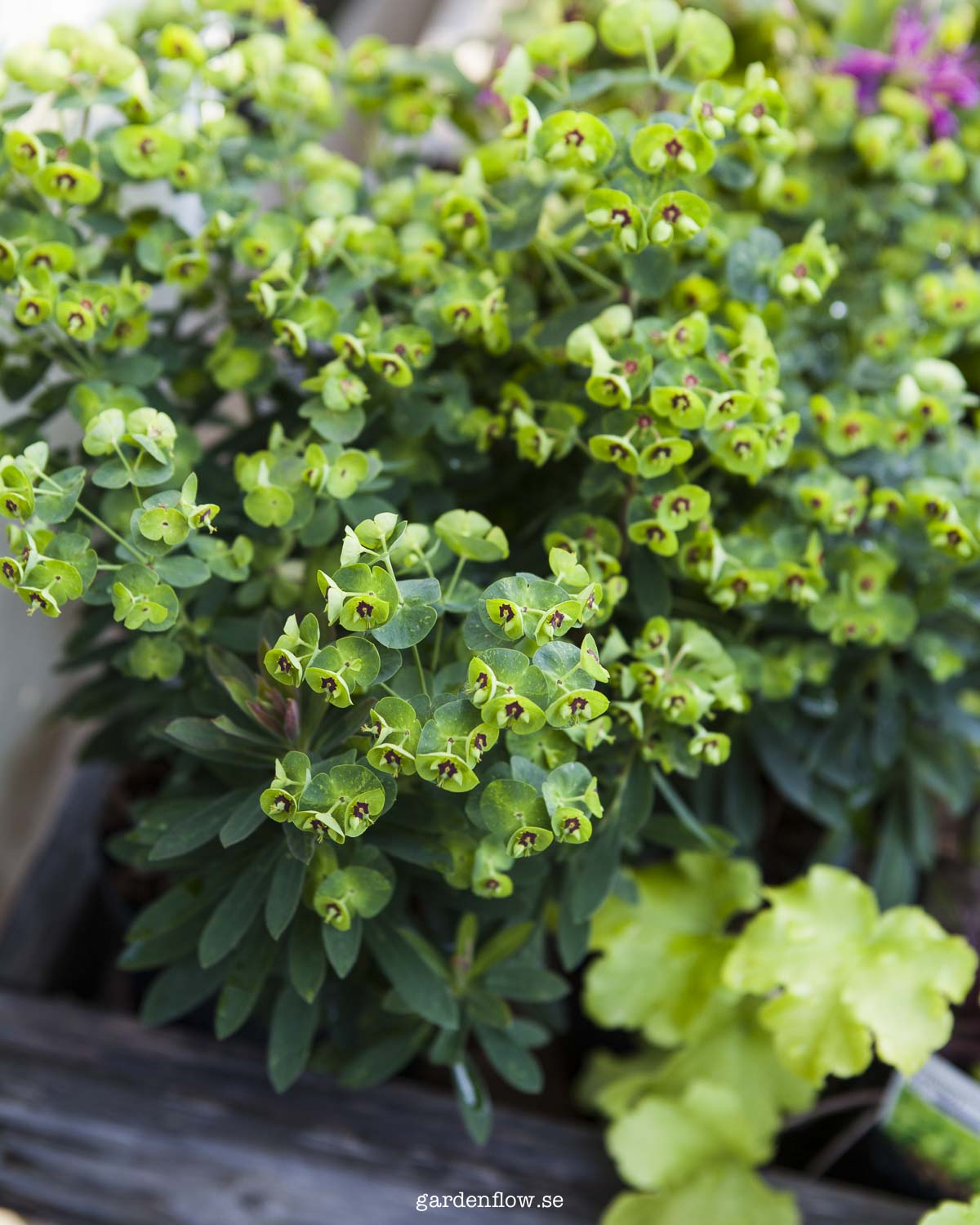 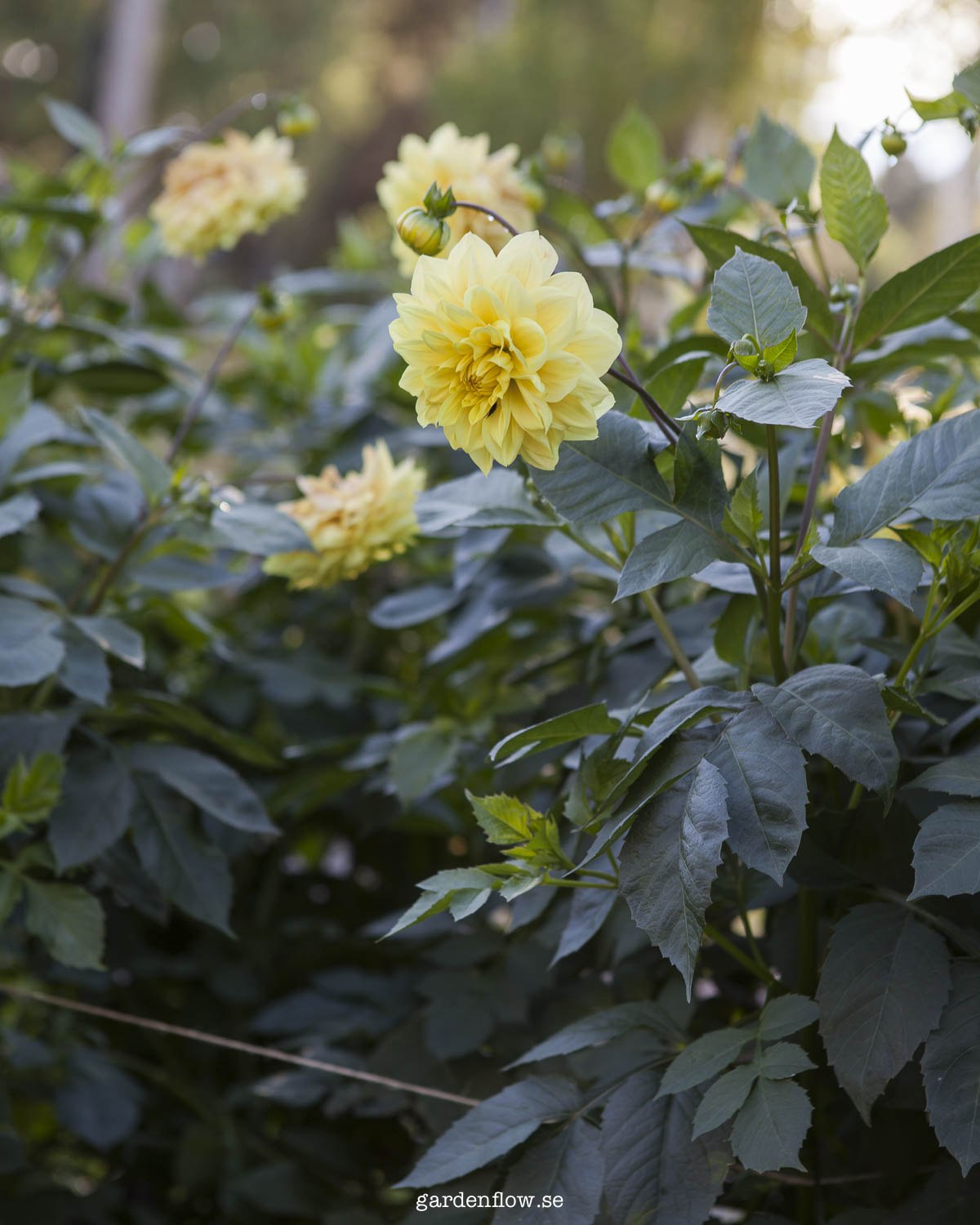 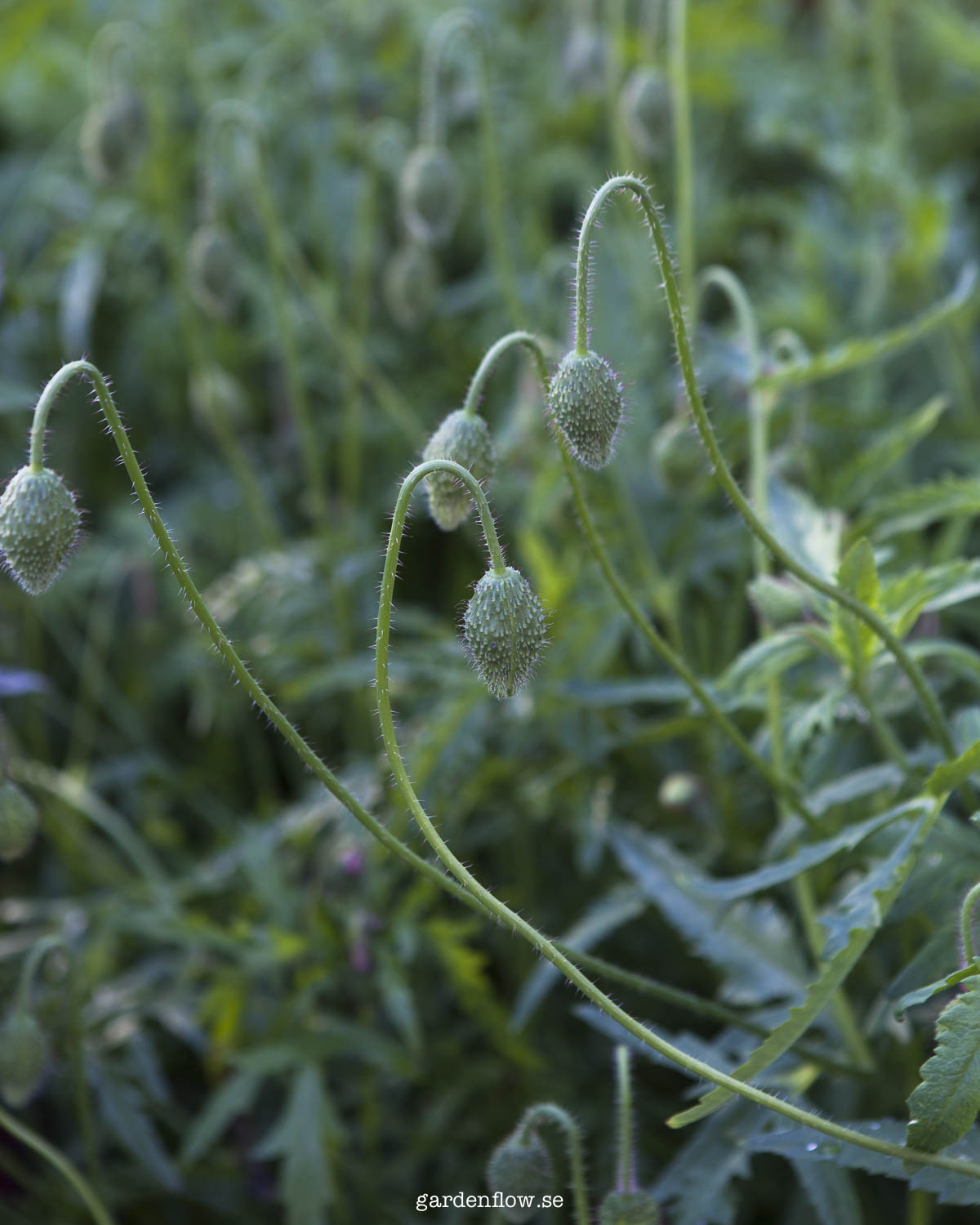 The nature close to Kniva. A flock of Canada gees flies by. 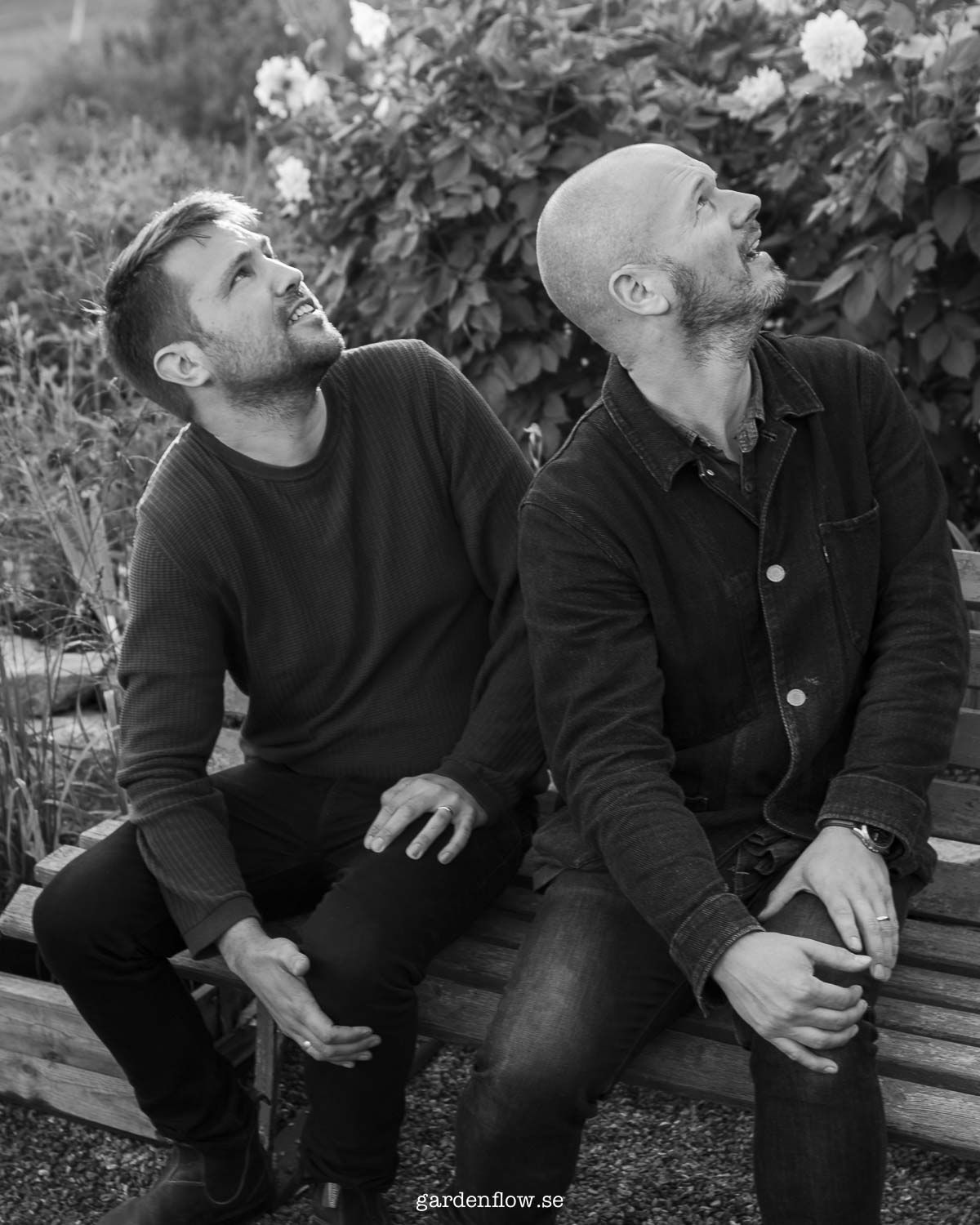 When we turn into the yard between the two red houses I see André amongst the plants holding a watering can. Andreas is visible in the shop where the doors are wide open. Flowers and plants are set along the wall of the shop and the entre staircase is surrounded by baskets, swaying grass and delicate flowers.  You can just about see a greenhouse around the corner and the road there is bordered with even more plants, baskets and pots. The evening sun, which is unusually warm and soft for September, almost gives the feeling of summer returning. I close the car door, take my camera in hand and strongly feel that I will feel at home here. 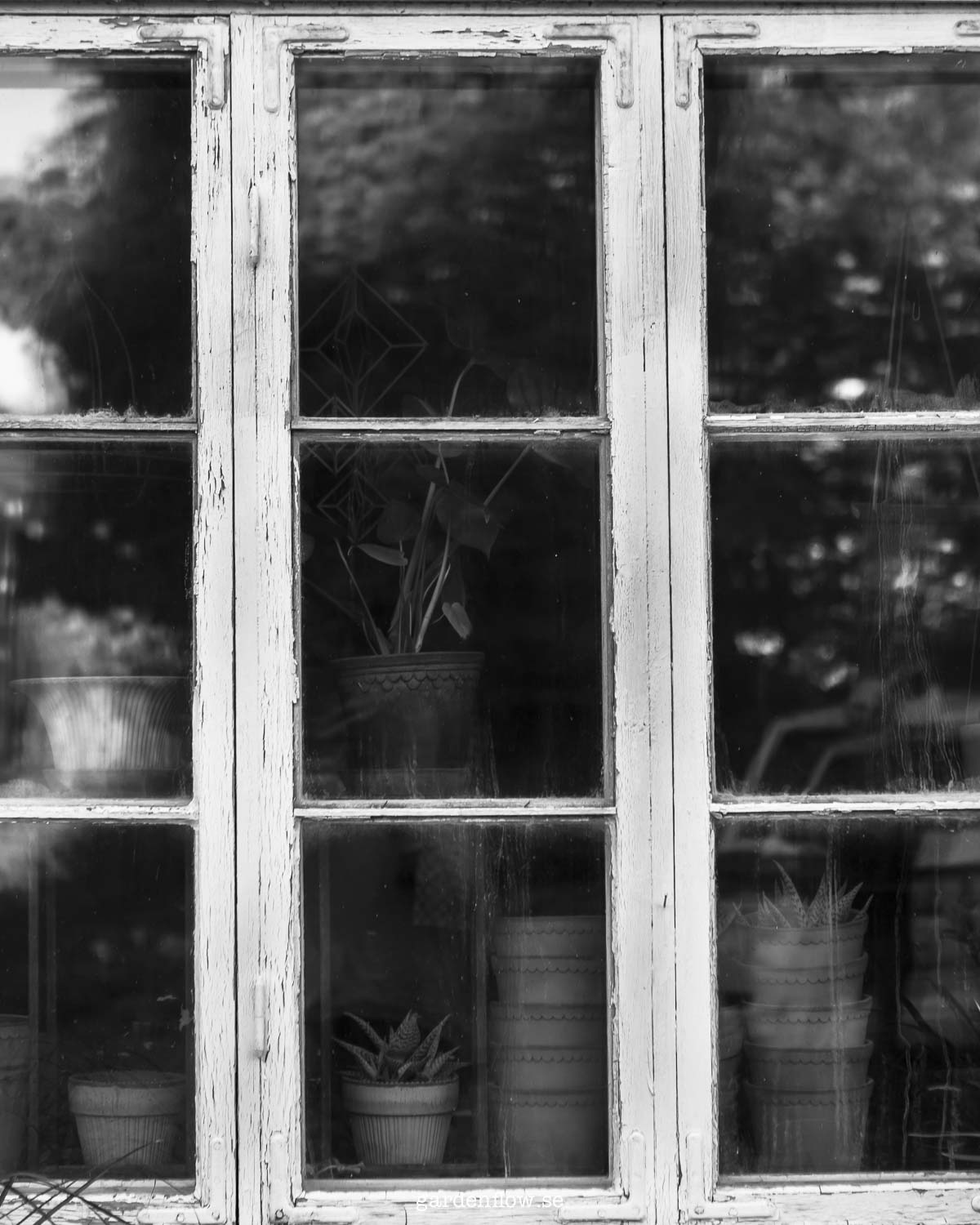 Behind the keys and camera
/Charlotte