An eye for good taste. Calm, harmonious and simple. Thought through, long term and contemporary. Yes, that’s kind of how I would like to describe Maria Dremo Sundström’s, or ‘Maria på Almbackens’’ style when it comes to do with gardens. Maria and I have been blogging friends for many years, I believe we started to blog around the same time. Today she works as a garden designer. When the demand for her help to design gardens grew, she took the step to start her own business. She stepped down from her job as a civil economist and took a leap out into the creative, green world. Perhaps the leap was not so big with an architect for a father and a strong interest in form and interior architecture. Her interest in gardens she got from her driving force to sort the family garden, or the house’s prolonged room into the garden. Because that is how Maria looks upon gardens, like a tight connected part of the living space and its style.

All the photos are from Maria’s show garden at Sofiero 2016. 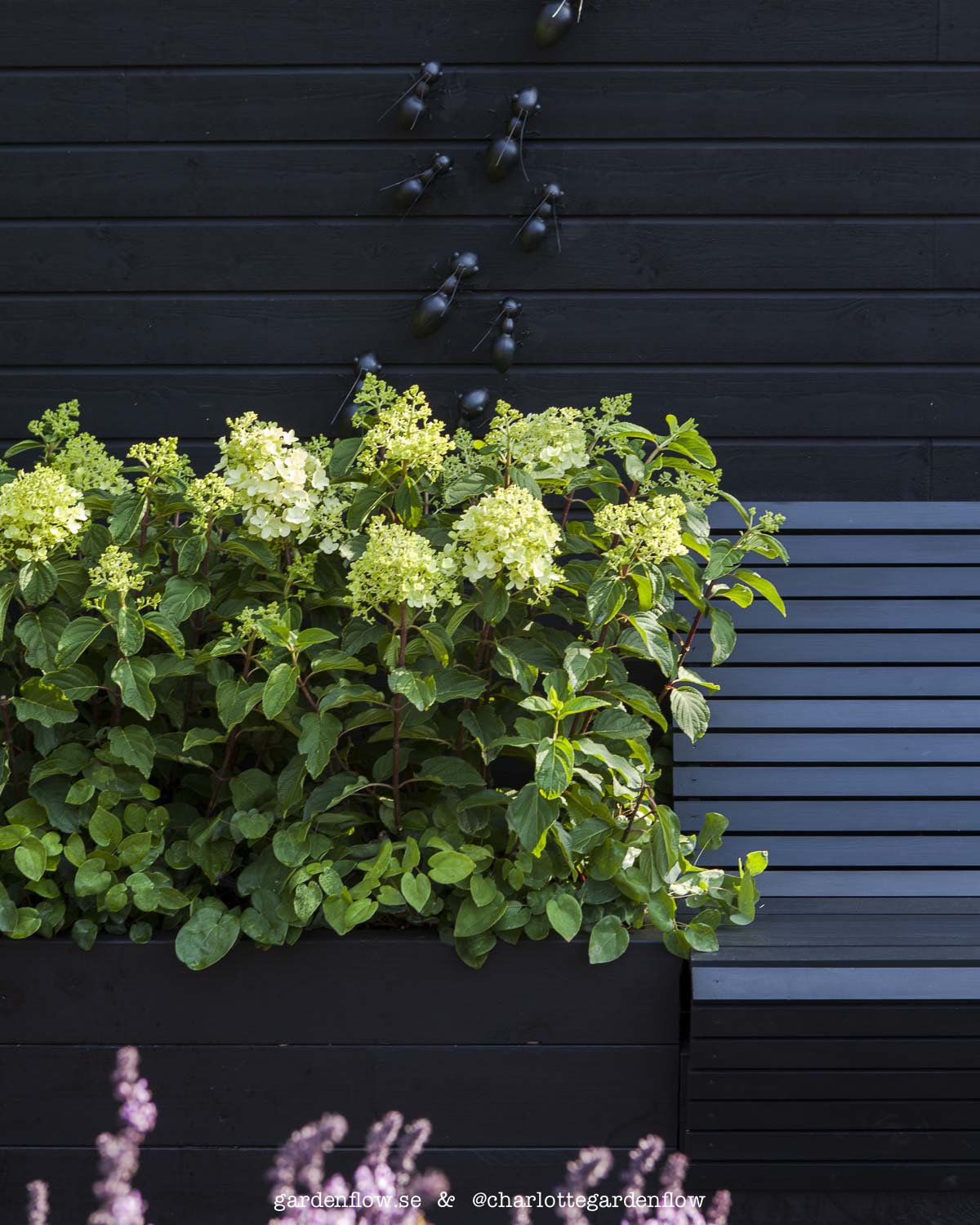 About the gardens design

When we talk about what is the most important part when a garden is to be built Maria says without hesitation: form and function. Everything starts there. With a strong base a garden can be filled with almost any kind of plant, as long as the right habitat is considered. It is the entirety of the garden that is important, not the individual plants. Maria tends to get a free hand with her commissions, after the functions have been pinpointed and they’ve agreed on a base. Big chunks of green is the foundation of all of Maria’s gardens and it is extra important that the entrance is as green as possible all year round, preferably with addition of spring flowering plants and bulbs. She likes having flowers around the patio, but it can also be that her clients are always away during the summer and then it is more important to put in flowers that are beautiful in the late summer and early autumn instead. 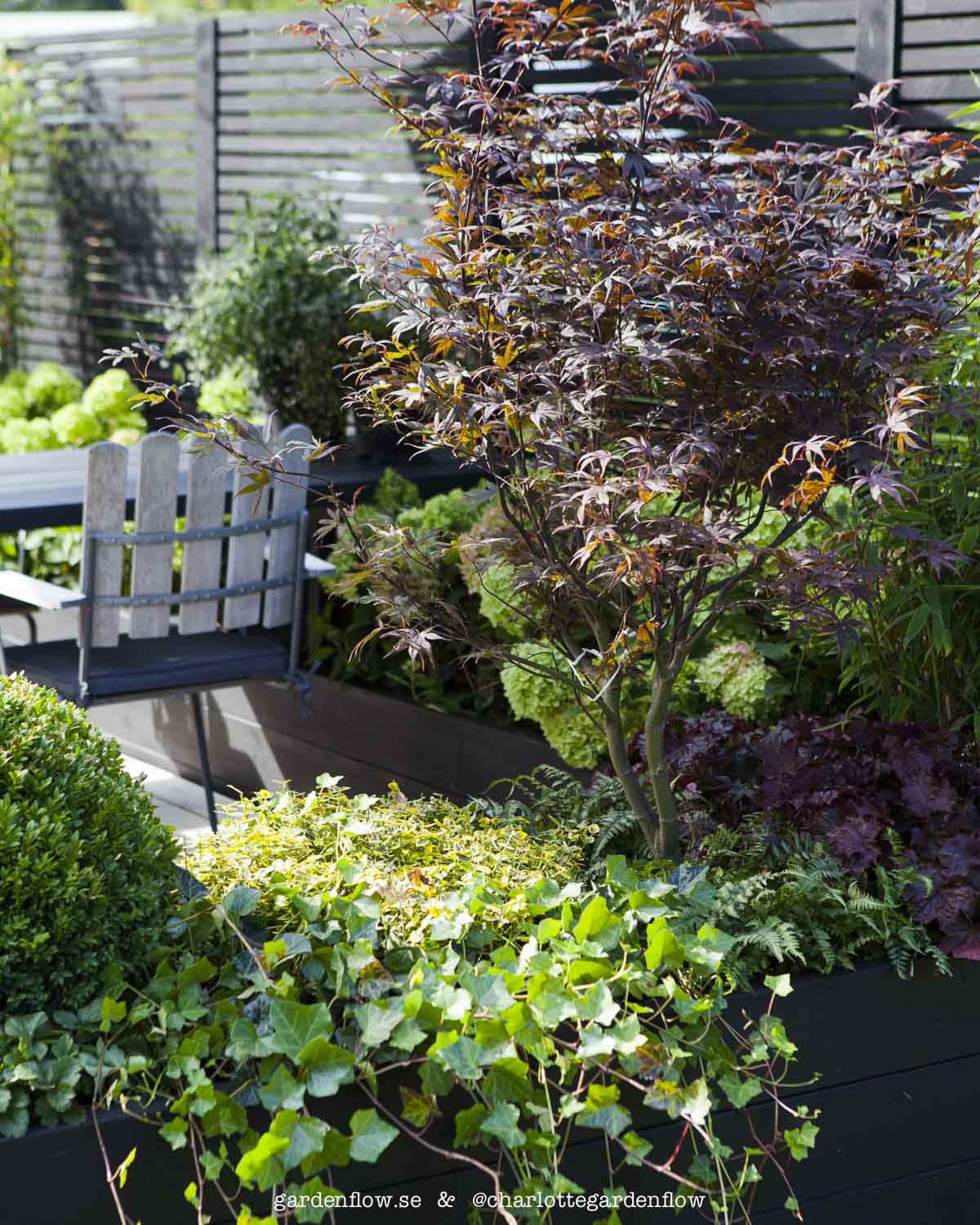 The most important thing to think about is how you want to use your garden, what functions it should contain and where they should be and then plan from that and connect with paths, lawns and plantings. Don’t make the beds, patios etc too small. Think big and hearty and in proportion to the house.

How do you create the foundation for a garden? It can be anything from defining a piece of lawn, paths (that should harmonise with the shape of the house) to hedges and framing, areas, fixed buildings or sight lines.

If you prioritise your input into the garden: Choose trees and bushes that grow. Focus on selected parts and work on those instead of a little bit here and there. 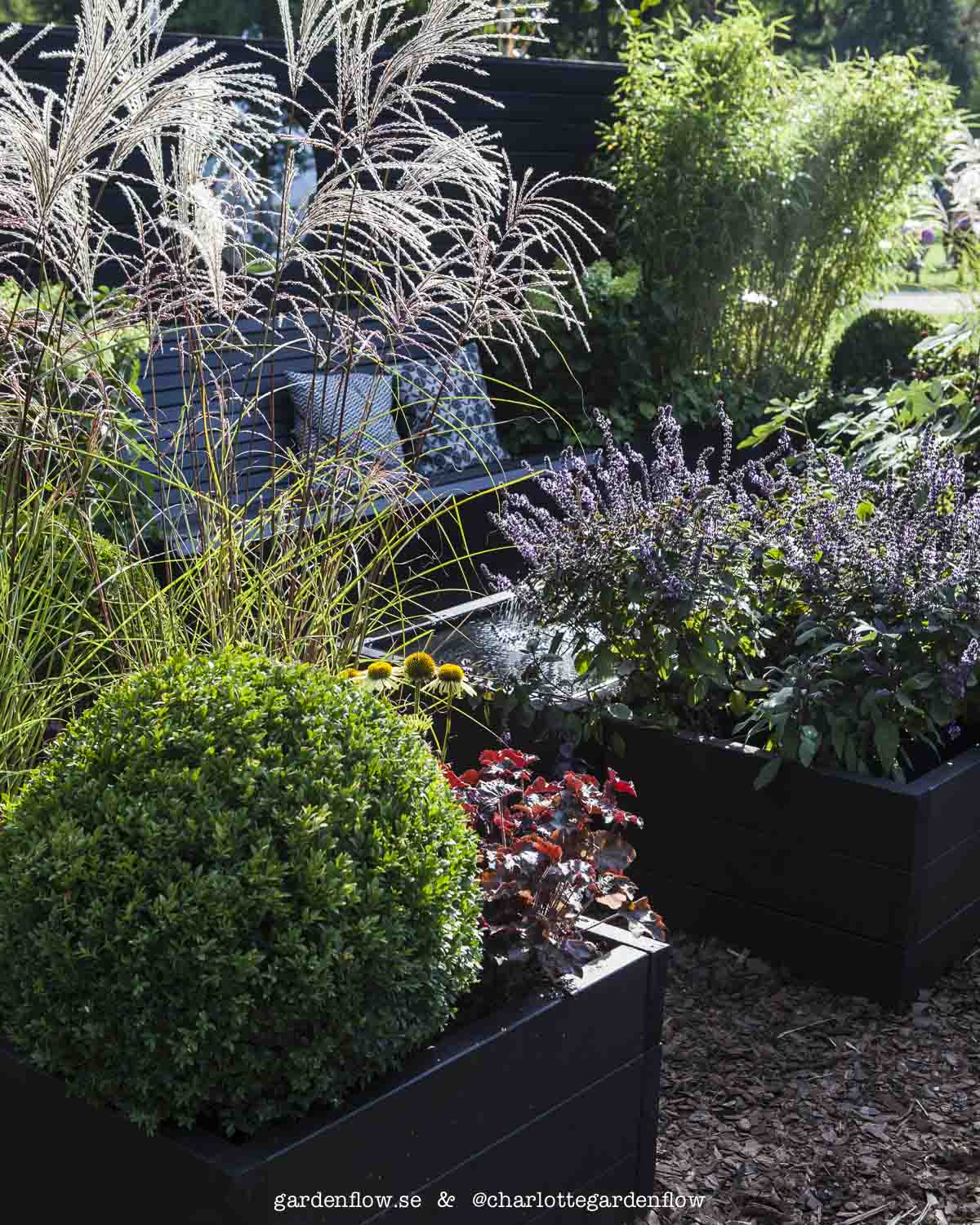 The biggest mistakes many people make:

Making too many stone formations (stone deserts), which are popular in modern gardens. You want it easily maintained and put down a lot of stone, sometimes with the occasional single grass sticking up. It becomes sterile and cold, at the same time as it isn’t that easy to maintain.

A misconception that a lawn is the only thing that is easily maintained.

A fear of trees that can be seen in everything from taking a tree down due to wanting more sun, to a fear of planting trees. There is no better shade than the one from a tree, trees give you such a valuable feeling of shelter in the garden and beautiful silhouettes during the winter.

To have not considered what it is that gives a feeling of comfort in a garden. For example, a patio where you can see the car park is not the nicest placement comfort.

Advice to people who have just acquired a garden: Get professional help from a garden designer. If you are interested in plants you can get help in drawing the shape of the garden and then fill it yourself.

Is it important to plan your garden? ‘Yes, I think so. It is calming to have a design to follow.’

Remember that when you plan a garden it should last for many years, not only the infancy years. Many clients who just recently bought a house are in the family settling phase of life and want the garden adapted entirely for the children. The time does pass very quickly and Maria advises everyone to not do that but to think of the long haul.  Trampolines and other child activities can be planned in smoothly and with awareness that the needs will change.

Easily maintained? I ask Maria if the people that hire her want their gardens to be easily maintained and they all want that, but at the same time there is an understanding that there is no maintenance free garden and that it takes maintenance to keep a garden nice. 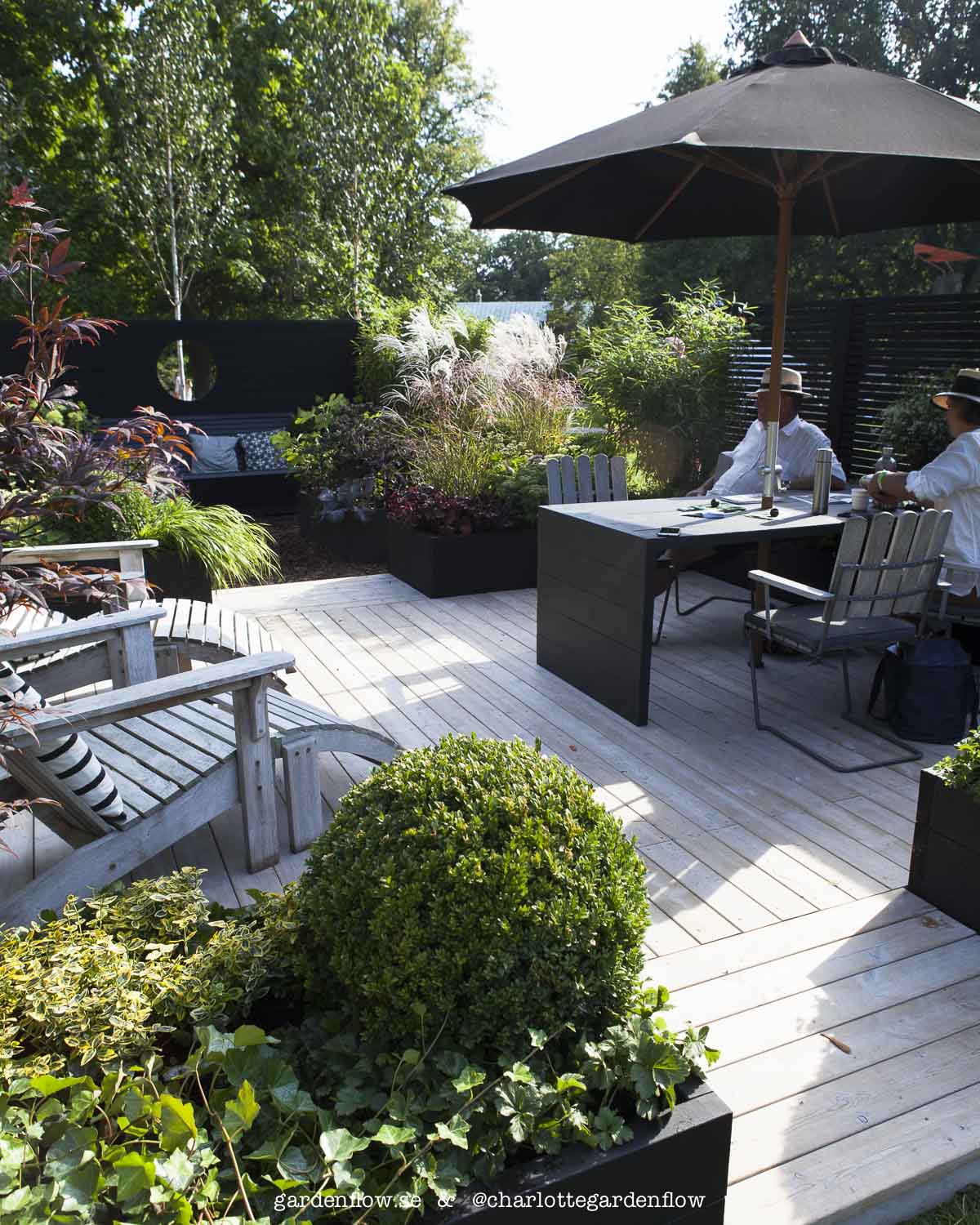 Winter in the garden

Something that lies extra close to Marias heart is how the garden looks and feels during the winter. During our interview, when Maria talks about how she reasons regarding the winter landscape in the garden, I can’t stop myself from establishing how different our conditions are. I, who live in zone 4 (Swedish zone scale) and have quite a short season, focus on maximising the experience of the garden during the summer time. During the winter it is mostly buried underneath great masses of snow and any thought regarding how it is experienced then is not prioritised.  To even be in the garden during the winter is rarely a possibility. I have to admit without hesitation that I am jealous and not a little bit either. Imagine having the opportunity to have access to your garden all year round, to be able to experience it more than during a few summer months and if the weather allows, a bit into the autumn.  I understand that Maria puts a big emphasis on this since she is working in zone 1 that often has snow free winters. The fact that her own garden is unbelievably beautiful during wintertime shows that she succeeds very well with it too. 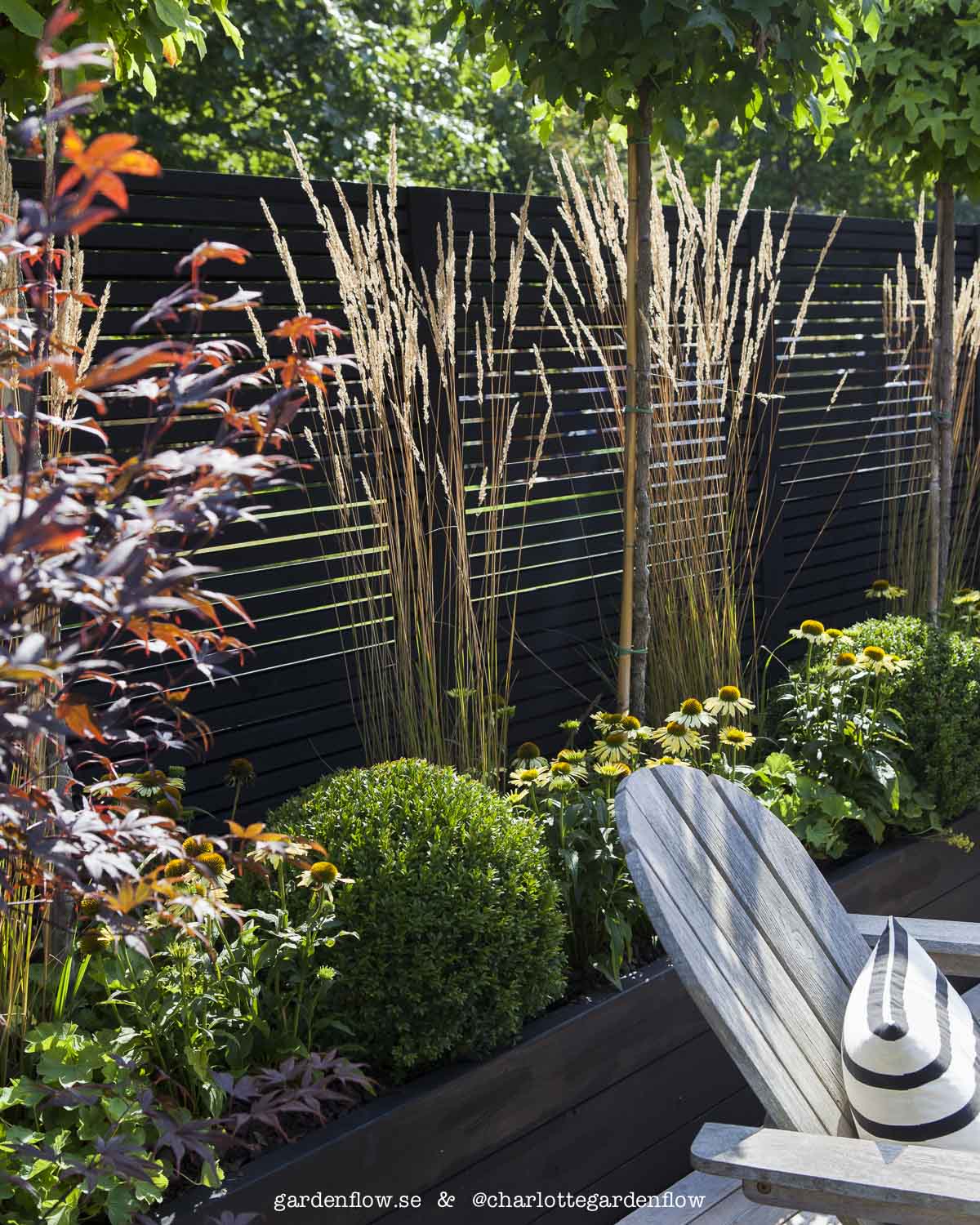 When the structure for her own family’s garden was brought up Maria focused firstly on all the functions it would house, to ensure that a strong foundation kept it all together. Also important was that the garden should be beautiful during the wintertime. The plot is 660 m2 and the garden takes up 400 m2 of that. The house is a typical 70’s house and some parts of the garden are from the time when the house was built, although the majority has been done since 2010. Maria and her family have lived in the house since 2003 and have both renovated and built more. The house is on an advantageous corner plot and there are some big beautiful trees just outside that give a great value to the experience of the garden. The back faces south and the front, where the entrance is, faces north. 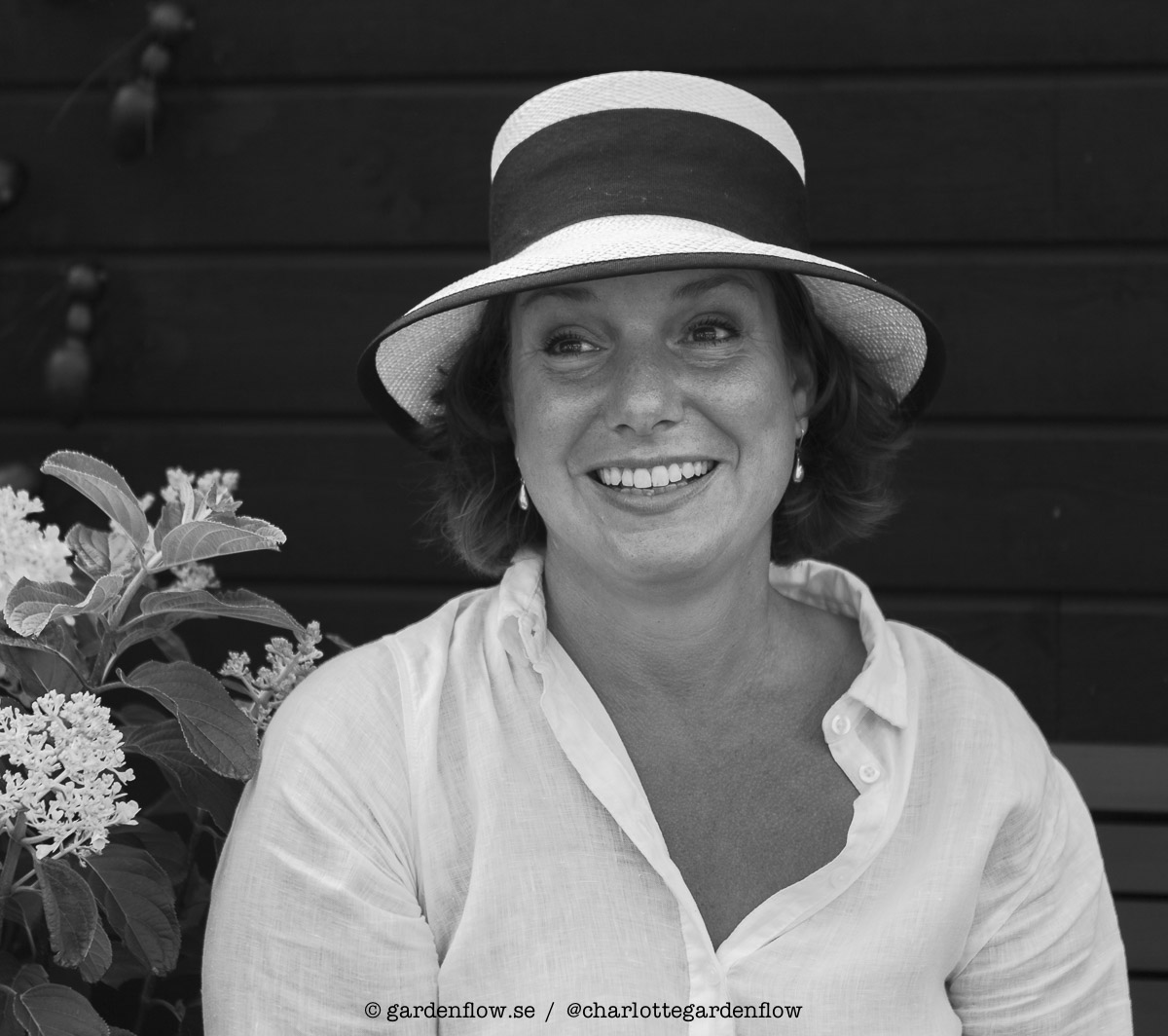 Maria tells me how she likes to ‘get people hooked’ on gardens. For many it is an eye opening experience to feel how beneficial and meditative it is to work on your own garden and how engulfed by it you can get.

In the garden there is an original Cherry tree, a big Willow tree and a Cedar hedge from the 70’s. A beautiful Saucer Magnolia that has been added later but before Maria and her family bought the house. The rest of the garden is all new. Maria describes the style as green, lush and with a strong form. I ask her if there was a plan or if the garden took its shape bit by bit? Maria answers that there has always been a plan that she and her husband made early on. The garden has been made bit by bit following the plan. In the garden near the house is a dining area, sun beds, a place in the evening sun and one in the shade of the cherry tree, a bamboo arbour with chairs, a garden shed and space for a compost. By the entrance at the front of the house the bikes, bin and other functions have been placed in clever ways so that they blend in and make the entrance calm and welcoming instead of messy and inharmonious.

Most happy with: That it is so beautiful during the winter.
Soil: Loam soil that works well. Fertilize with cow manure and some kind of nitrogen in the spring.
Biggest lesson: That a garden truly is changeable. Even if a plant is happy in one location for many years it is not certain that it always will be.
Hard: To get anything to grow well underneath the Magnolia where it is dry, shaded and lots of roots.  The Asarabacca works pretty well, the Periwinkle does not like it, nor do the Christmas roses. There is a constant of trial and error here.
Challenge: The grey field slugs (Deroceras species) that have been hard on the blue day lilies. I have many in pots but it doesn’t entirely work.
Shortcuts: I don’t scrub pots.
Weeds? I don’t have many weeds but I am not pedantic about it either.
Dreams: A greenhouse and it’s on its way to happen. It might get built next summer. The greenhouse will be where the trampoline was before and will be 20 m2.

At the Big Summer Party at Sofiero in 2016 Maria had a beautiful show garden that was very appreciated.  The thought behind the garden was to give the visitors solid tips for their own gardens and to show that you can create a garden in a small space. The idea garden was 55 m2 big (or small) and contained a lounge area, kitchen garden and dining area. The goal was to show a thought through and doable garden. In its entirety, in parts or as a part of a bigger garden. 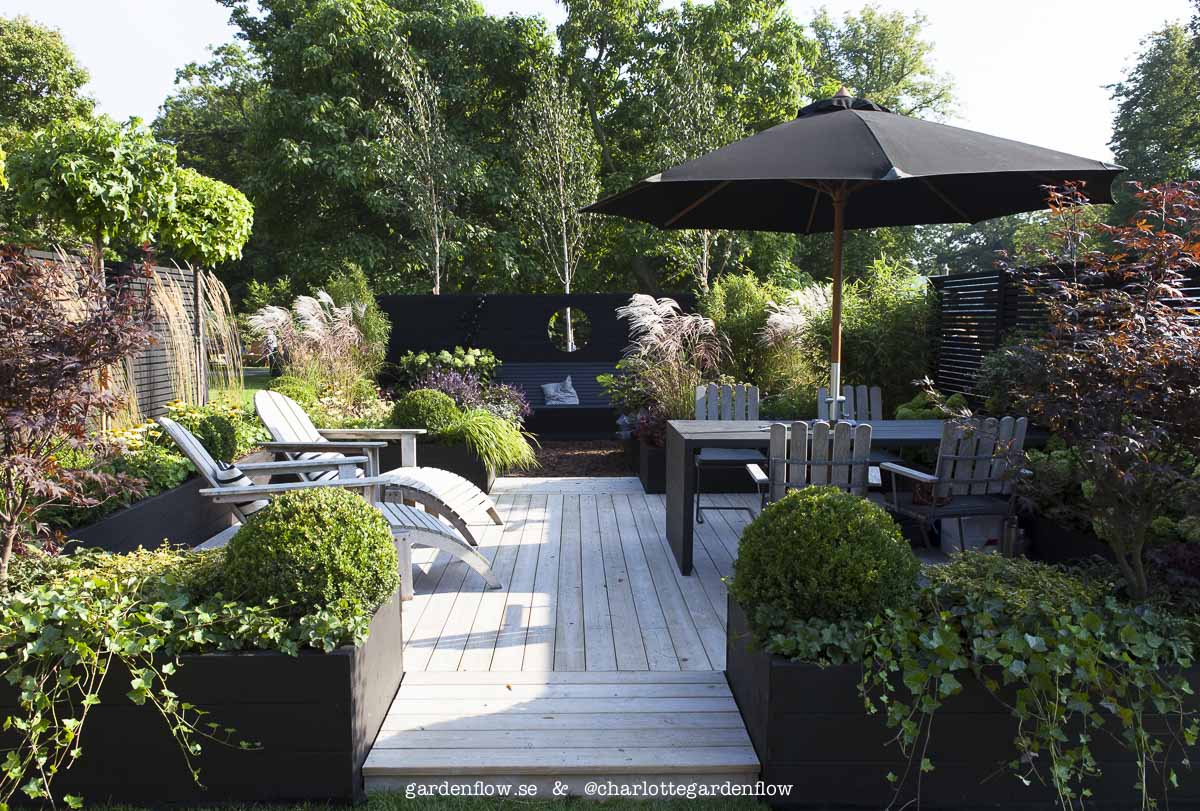 A lot can fit into 55 m2 if you think it through. The part of it that I liked particularly was that despite its size and the fact it contained so much, it still felt airy and had clear, broad paths. The cohesive colour and material choices makes the garden calm and restful. 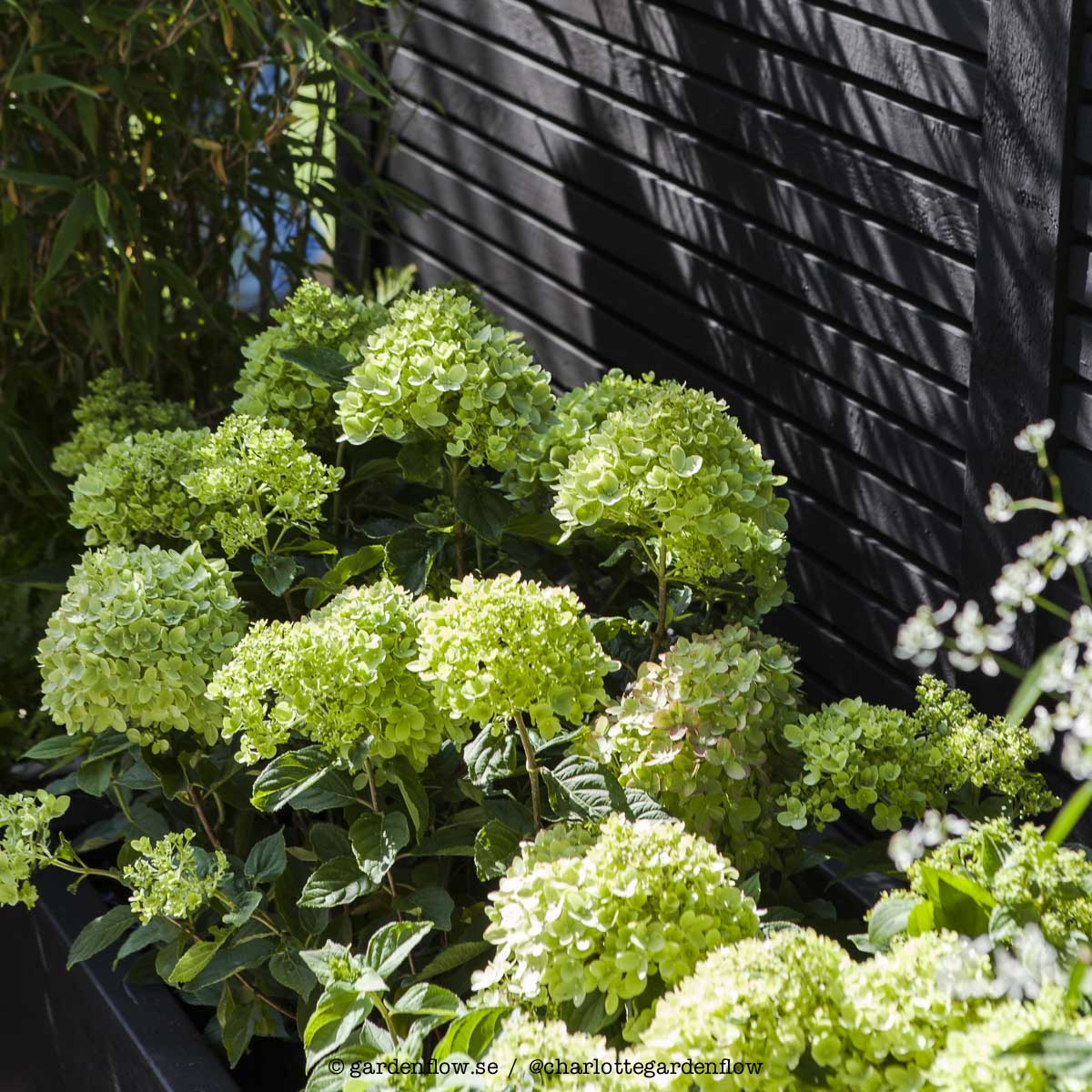 More information regarding all the plants, materials and building of the garden at Sofiero you can find HERE

It is soon time again for Maria to make a show garden. This time it is at Malmö Garden Show in the beginning of June. The basic idea is the same as for the one she made at Sofiero, to give solid tips for the visitors about what they can do in their own gardens. The area is smaller this time, only 35 m2 and here the visitors don’t get to walk through the garden as they could do at Sofiero.. The materials are wood, shingle and road bricks in combination with Cor-Ten steel. There will be a wooden background and seating. All the woodwork will be painted with an oxide-based paint that gives it a kind of ‘dark green-brown-grey’ shade that will work beautifully with the trees (Manchurian cherry, Prunus Maakcii) and rusty planting vessels. There will be water, green and cool colours on the flowers. Orbs, columnar white Ceder, globeflower ‘Alabaster’ Alliums and columbines.

I had the pleasure to see Maria’s garden at Sofiero. All of you that have the opportunity to visit Malmö Garden Show- do it! I promise you will be inspired. To build up a show garden has its stresses. Alliums that are in the fridge to keep the blooming in control and columbines in several shades to assure the right final result are examples of some of the little details that are essential when building an awesome show garden. Something I am certain Maria’s will be.

Her you will find Maria