With a sensitive eye for flowers, its colors, and shapes and how together they can be sheer, rustic, pompous, luxury and colorful symphonies. With as a strong sense of how things harmonies with each other and a long experience of creating inspiring environments, her creations are mouthwatering for most. There you have a short description of Mona Blom, one of the responsible for the greenhouse interiors at the famous garden center Slottsträdgården Ulriksdal in Stockholm. 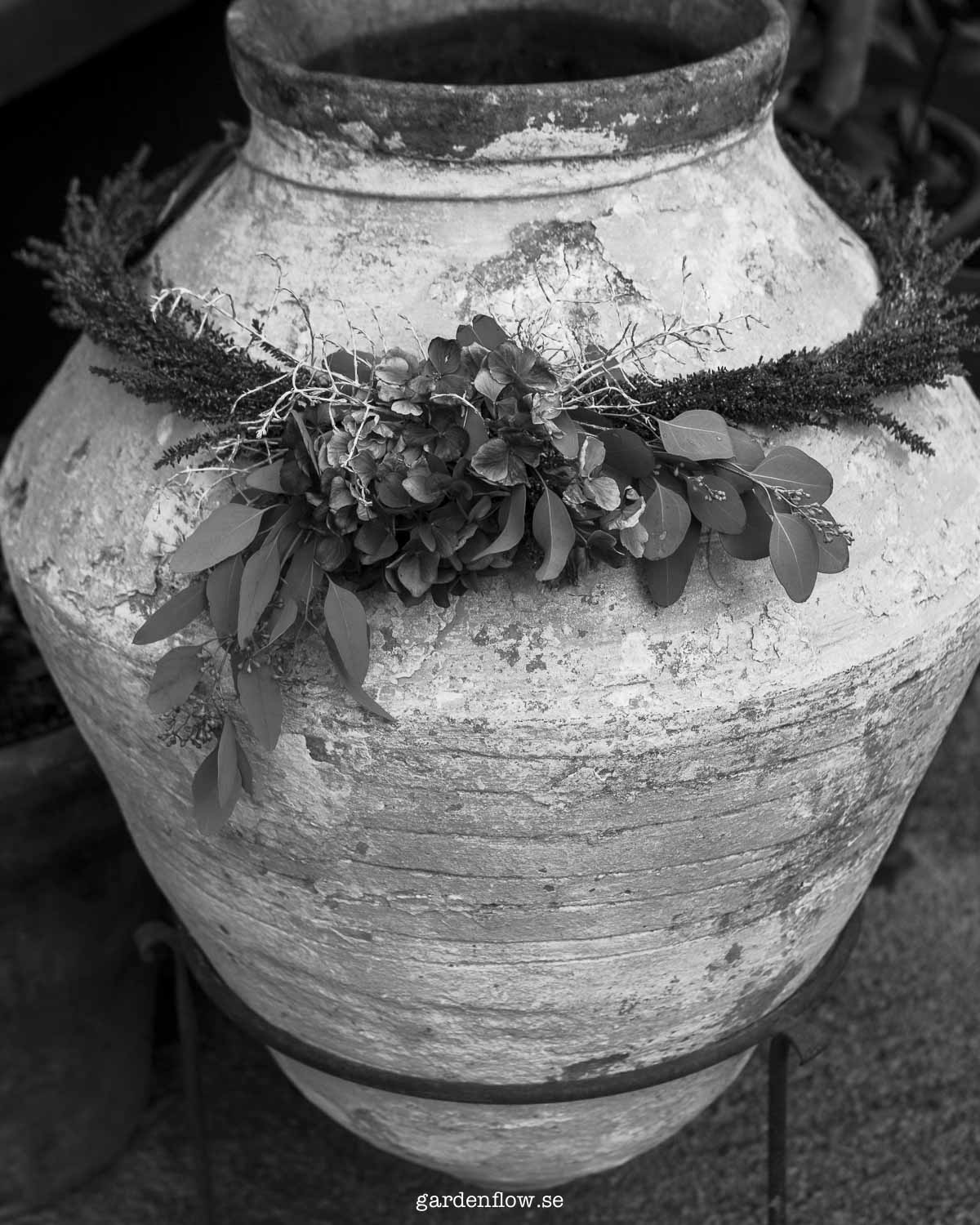 It’s October when we meet. The trees are yellowing and the outdoor season is almost over, a certain beginning of preparations for the winter in the outdoor department can be sensed. It’s however not anything that can be spotted when you walk through the doors to the big greenhouses, where Mona is in full swing with building a new setting among the houseplants. Colorful flamingos on big sheets of papers are being hanged up as a background wall, and generous houseplants in similar colors together with luxurious pots are being placed on the tables in front, everything run by Mona’s sharp intuition for great results. And it’s right there, in the middle of creating where Mona often is found at Slottsträdgården Ulriksdal, busy making the settings in the greenhouses as inviting as possible. Mona also does the beautiful and often lavish flower arrangements, which welcoming stand in the entrance or placed in the greenhouses. It literally glows of Mona meanwhile I ask my questions to her about her role at Ulriksdal. 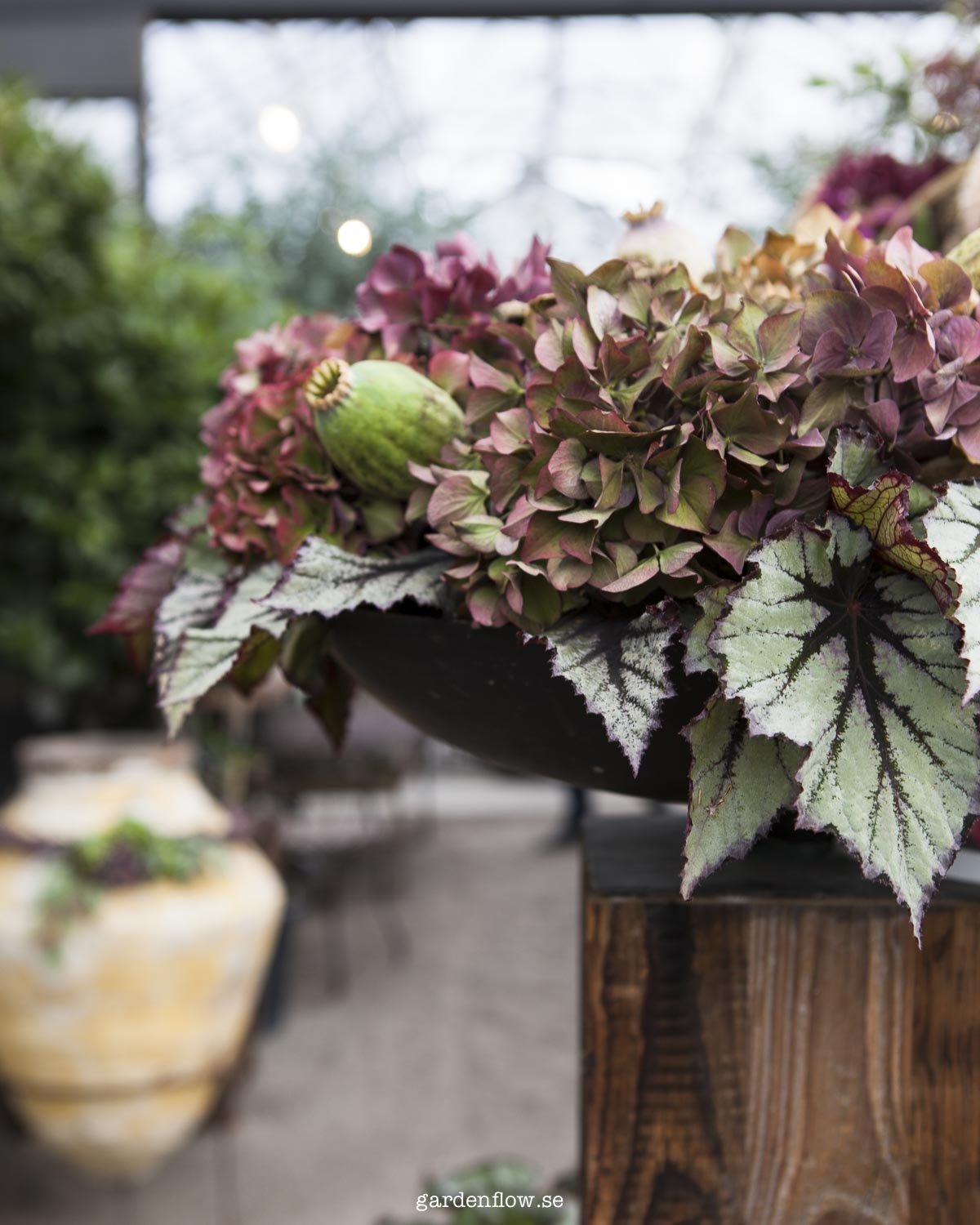 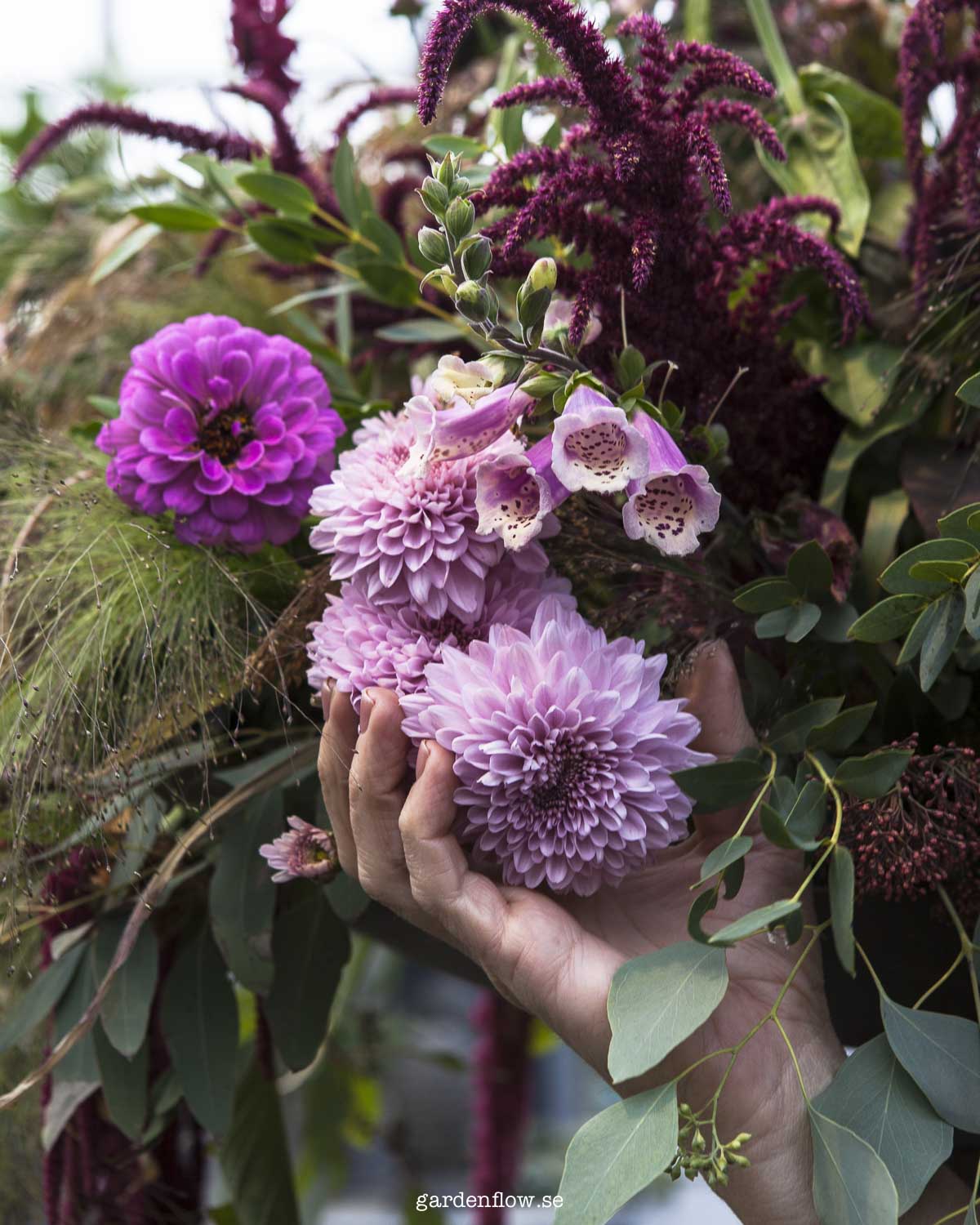 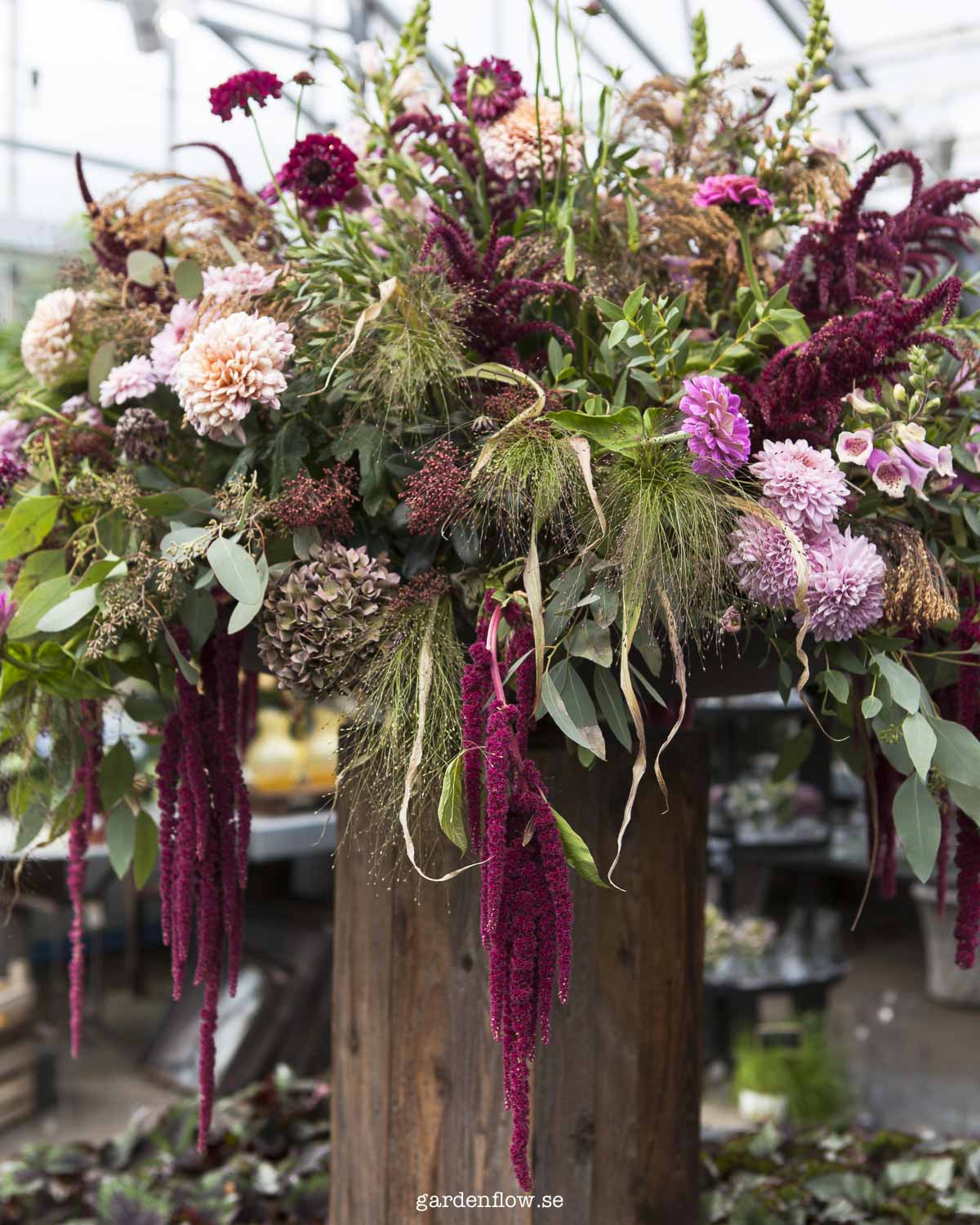 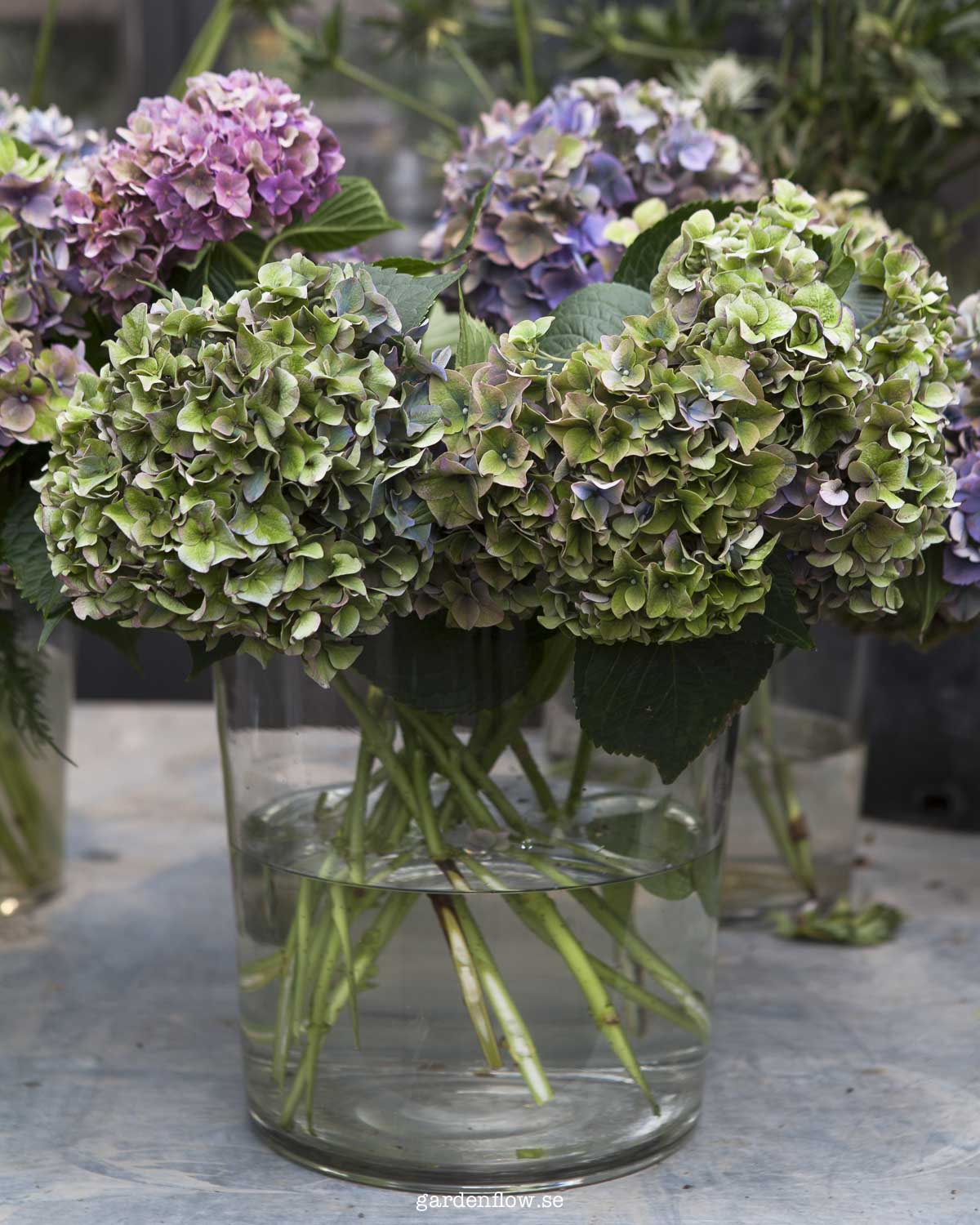 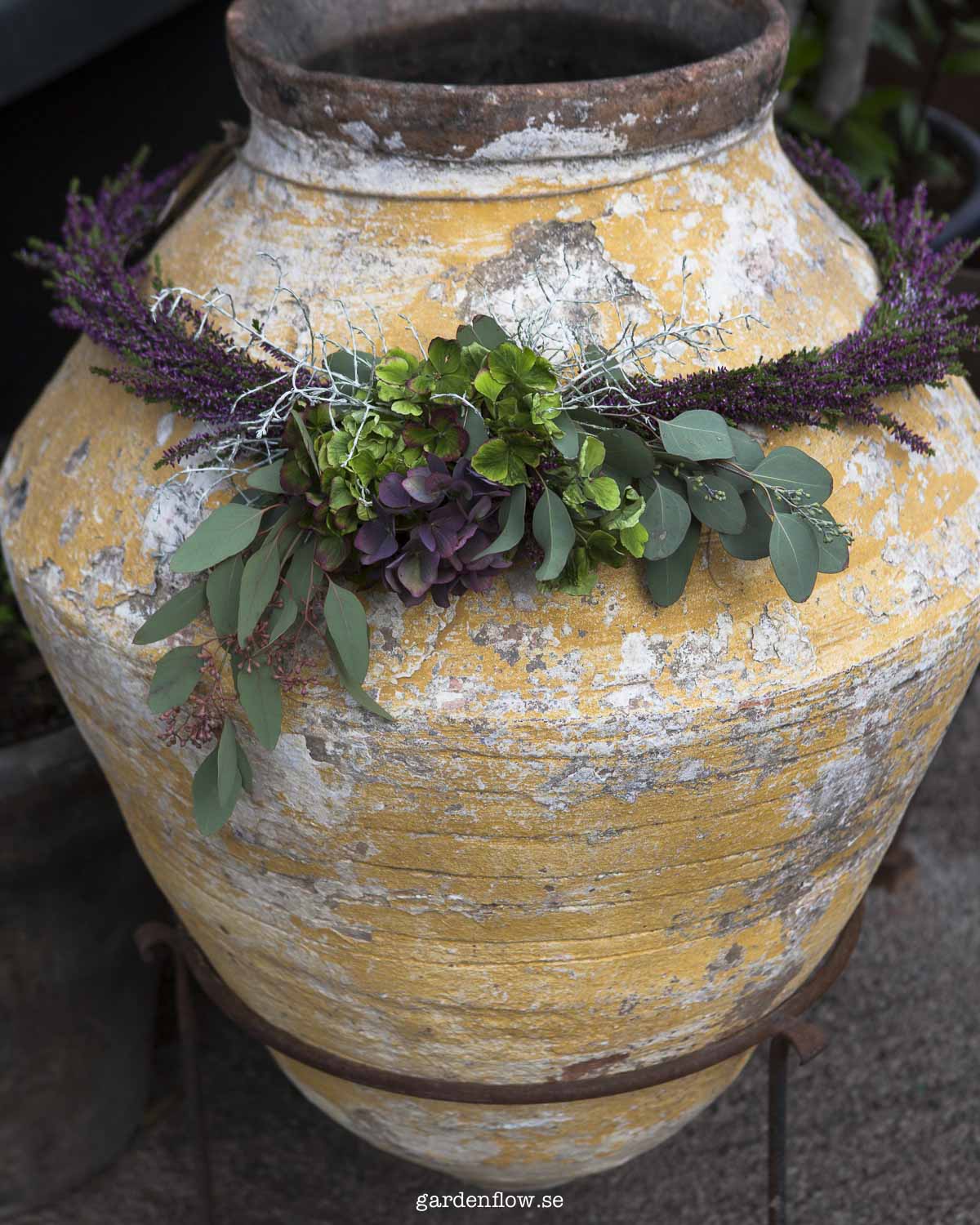 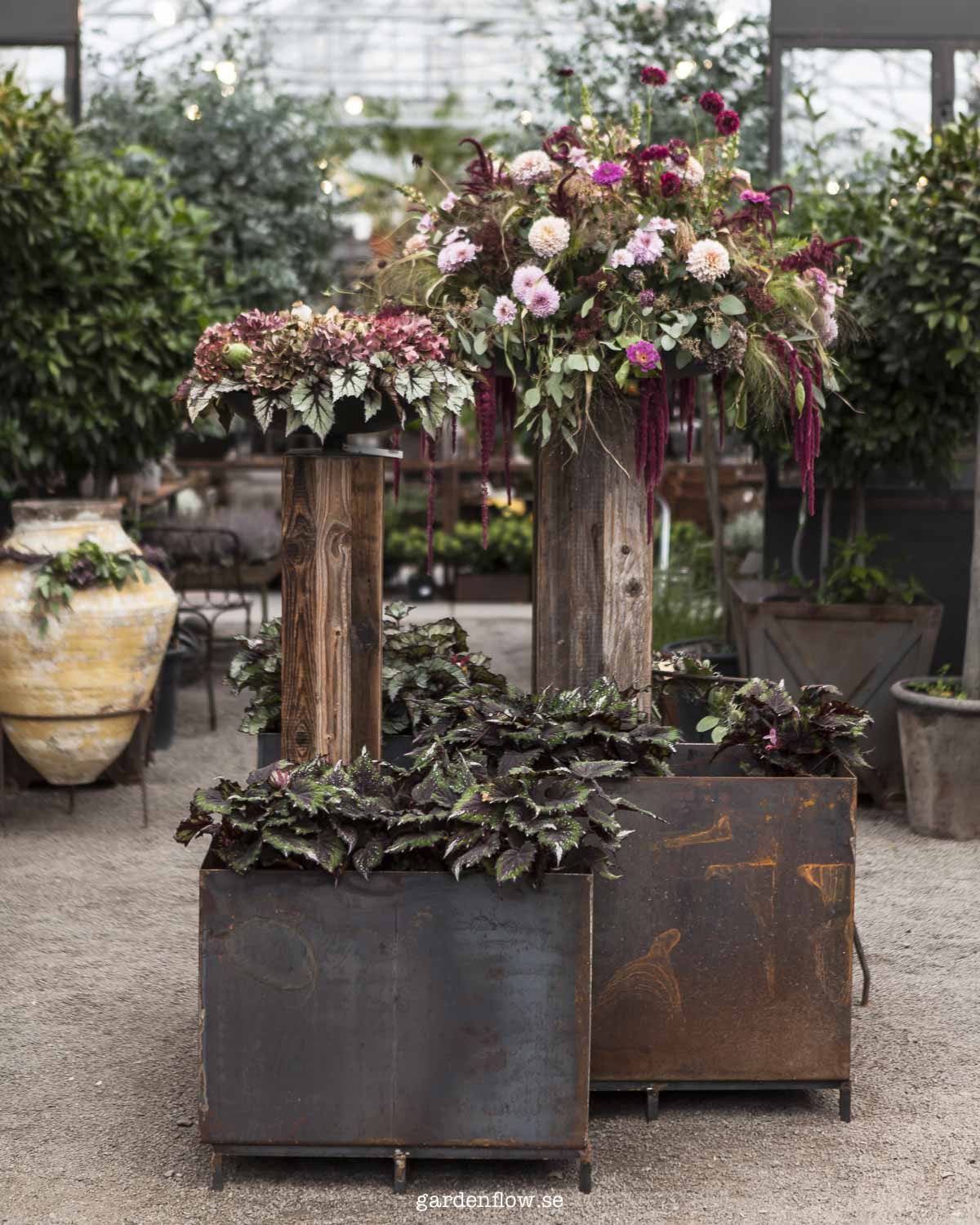 Let’s back up the tape first for a second. The largest part of her professional life, Mona has run her own company, and not just any company but Årstiden at Drottninggatan in Stockholm. For 21 years she and Anna-Karin Nyfjäll ran this interior design and flower mecca, which were innovative in many ways, by among other things being the first store in Stockholm which sold vintage. Everything in the store was for sale and there was always a charming and unique collection of furniture and interior decorations that were handpicked by Mona and Anna-Karin. Årstiden set its foot at fairs, events, in newspapers, TV and were a sort of inspiration metropolis that had its reach to every kind of context. 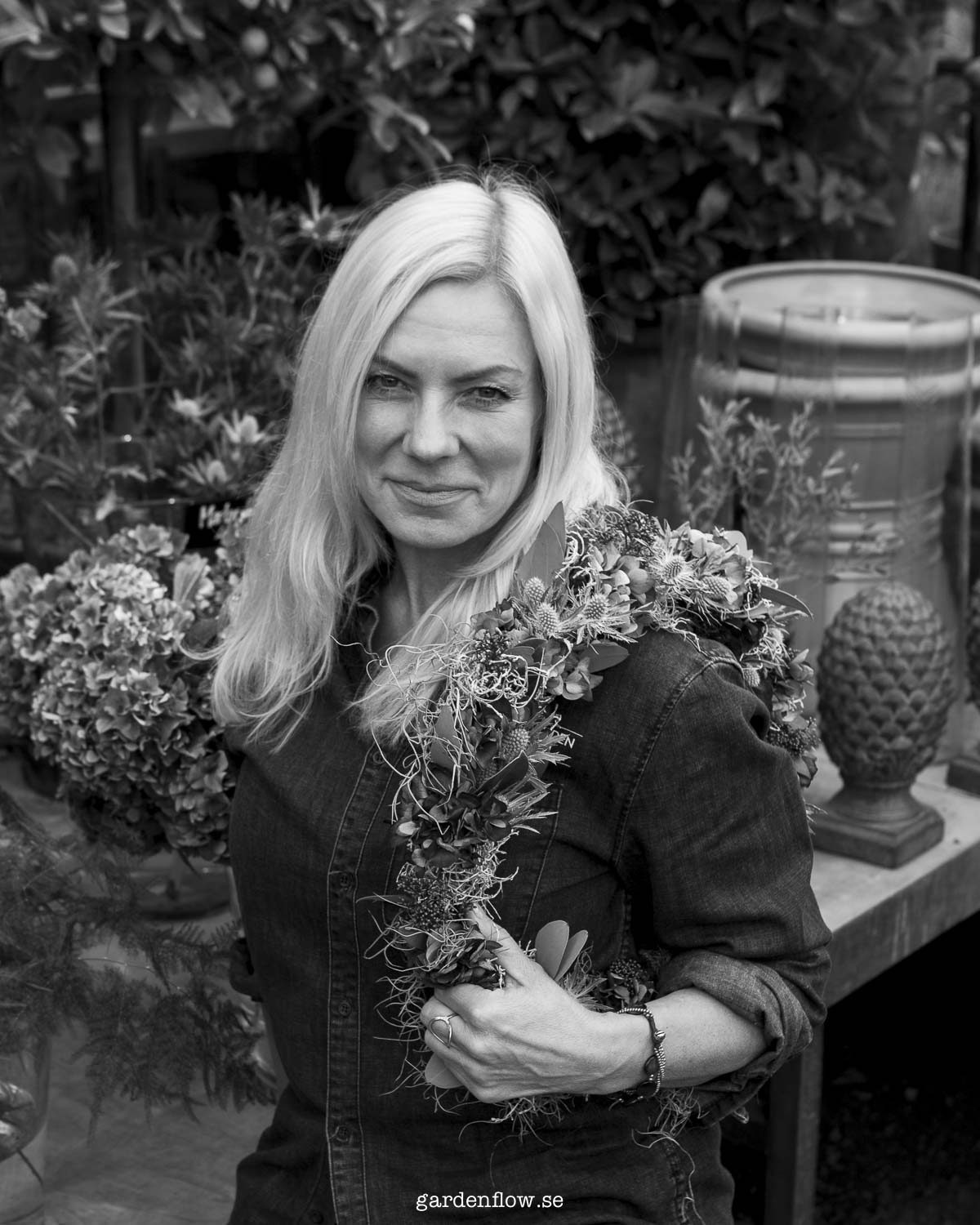 I’m always curious about how interests are born and where everything started, and I ask Mona about exactly that. Why did she choose flowers? How come she got an education as a florist? During her childhood in Österåsen, outside of Sollefteå in Västernorrland, she worked extra at the local garden center. The tasks considered of everything from weeding at the organic cropland and making flower arrangements in baskets for Christmas. The garden center was early with organic farming, and had cooperation with the health center, which also were in Österåsen. After high school and her time at the garden center, she worked at a florist shop in Sollefteå where the world of cut flowers and flower creations opened up, and pretty soon Mona applied to get an education as a florist in Norrköping. “The aesthetic, to get to create with flowers was what lured me in” says Mona. 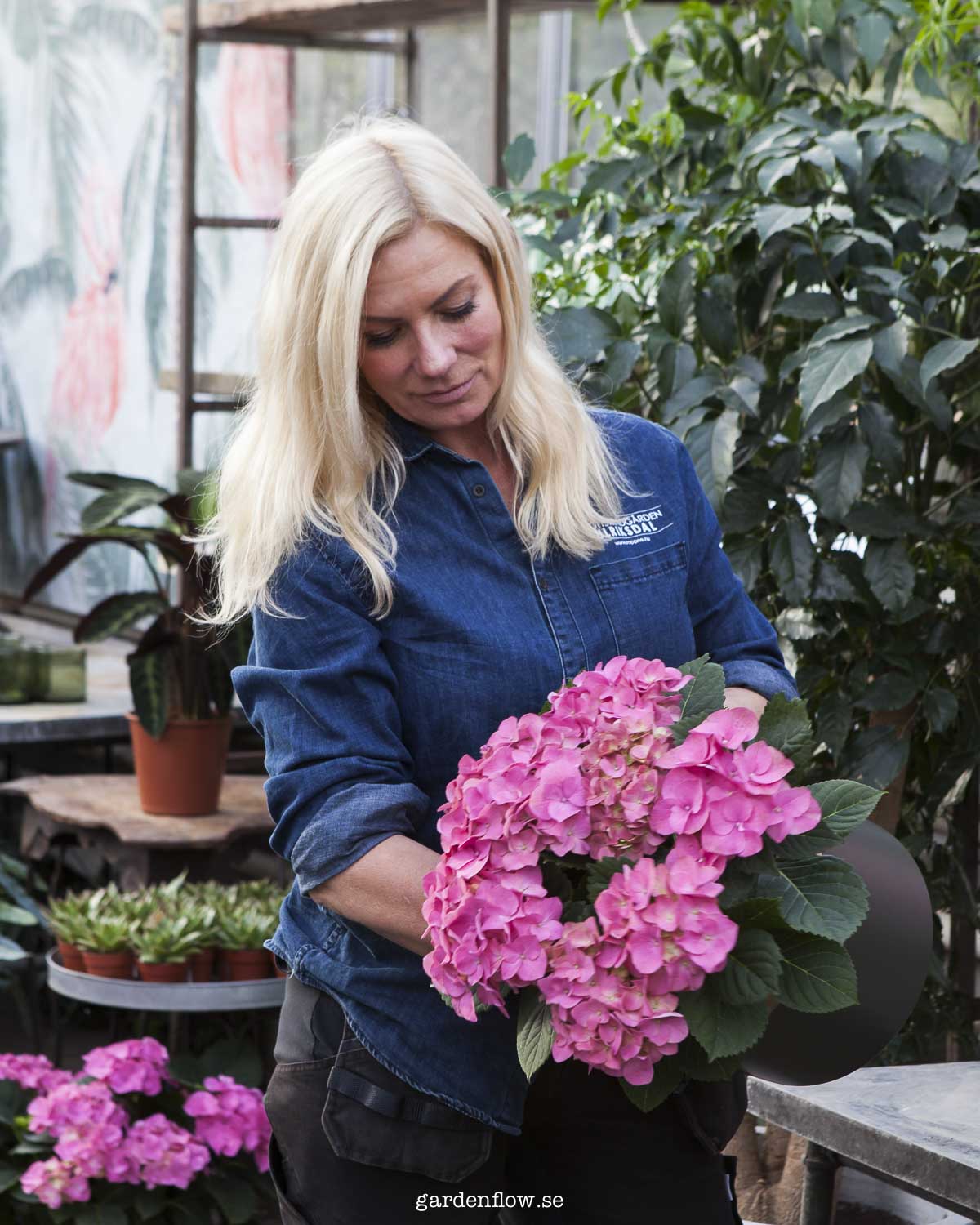 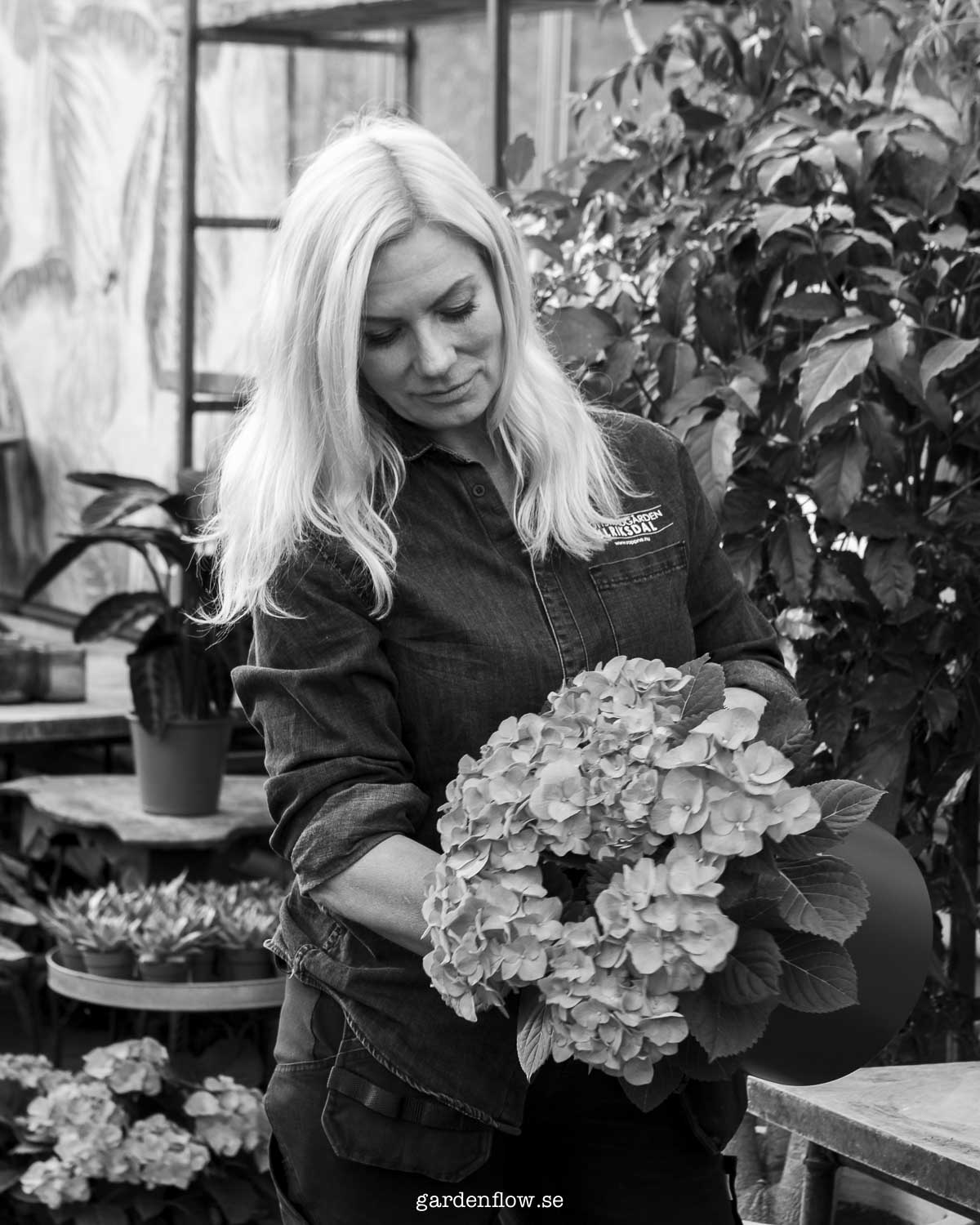 My flower arrangements often have a free and wild look.

Does a florist have cut flowers at home too, or does the work take all the room in your head am I thinking of. What do you think? Some of the grandiose arrangements Mona gets the opportunity to make at work are not made in to simple versions to take home she tells me, but there are always fresh flowers on the table, often simple and natural arrangements. Flowers with knobs are favorites, and preferable dark or light pink. It can be sensed that the big and magnificent bouquet in one of the greenhouses at Ulriksdal when I’m visiting is a reflection of Mona’s personal choice of color and style, which is exactly how Mona has described her personal taste, wild and sprawling. Also delightful and luxurious I would say.

Geraniums: I like geraniums and am more than happy to try different varieties every year, but I’m not a devotee.  I like changing things up and am curious to try new plants and would therefore never be able to get a tattoo, Mona says and laughs.
Houseplants at home: I prefer big, and easy houseplants. I’ve killed a couple of myrtle.
Christmas flowers: Hyacinths are the big favorite, no doubt. I like to have many in a cluster and preferably budding. Cut Hyacinths are also nice.
Can’t be found at my house: I’ve not learned yet to like Saintpaulia. Perhaps it will come with time. I have a hard time with yellow and orange when it comes to colors.
You might not know this about me: I have competed in cross country skiing and basketball. My childhood had a lot of athletic activity, which I’m glad for today, with a good physics that is not to be underestimated when you are working in the gardening business, which a lot of the times are very physically demanding. 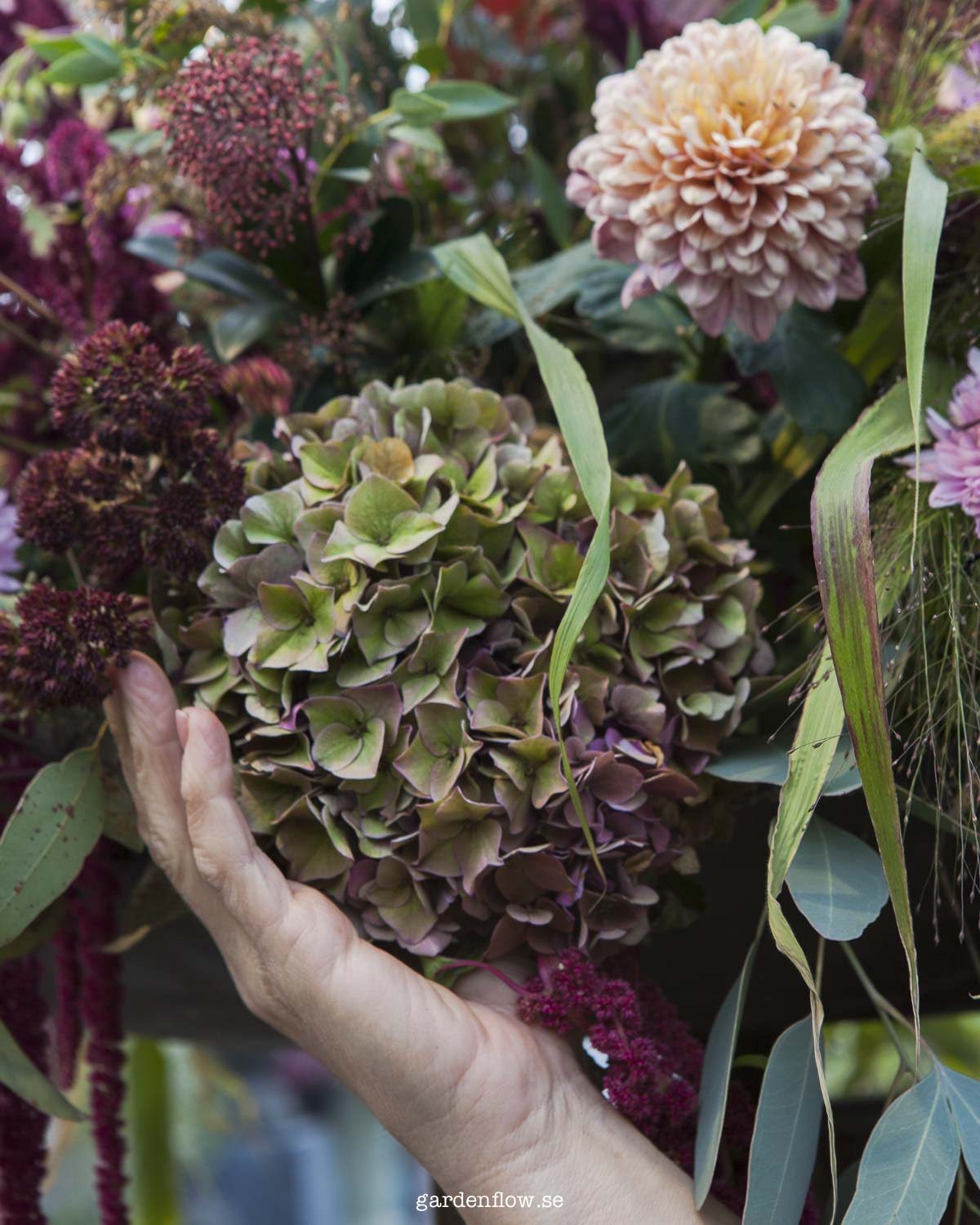 Everyone who follows Mona on Instagram will also be familiar with Giggs and Brorsan. They are the greenhouse cats, which have become so famous that visitors are asking for them, and they have their own place to sit on the cashier desk, which is where they are often found. You could say that they belong to the Slottsträdgården Ulriksdal team. The hilarious descriptions of their daily which Mona cleverly phrases in a loving way is something many giggle about, but that is what makes us take these cats to our hearts. 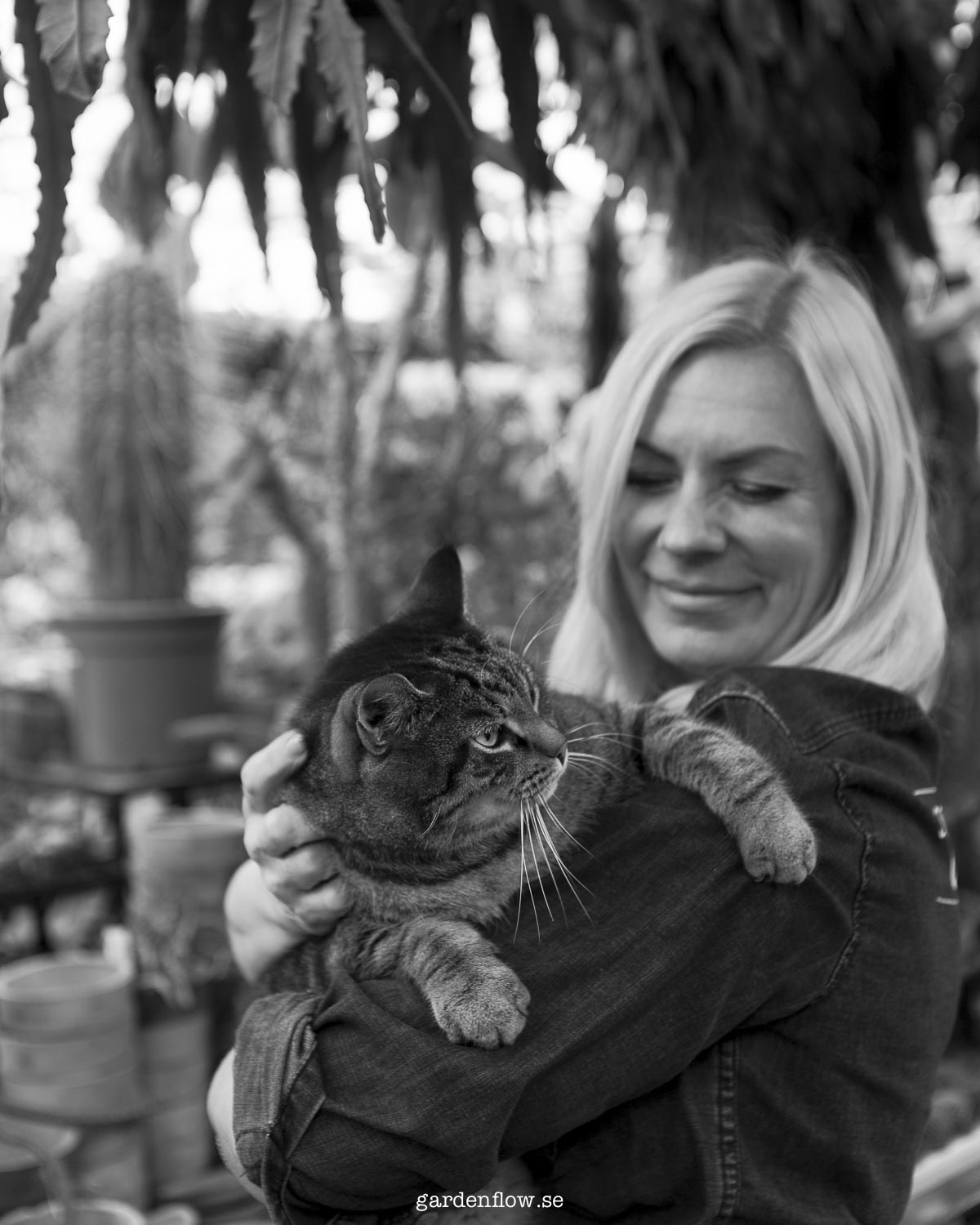 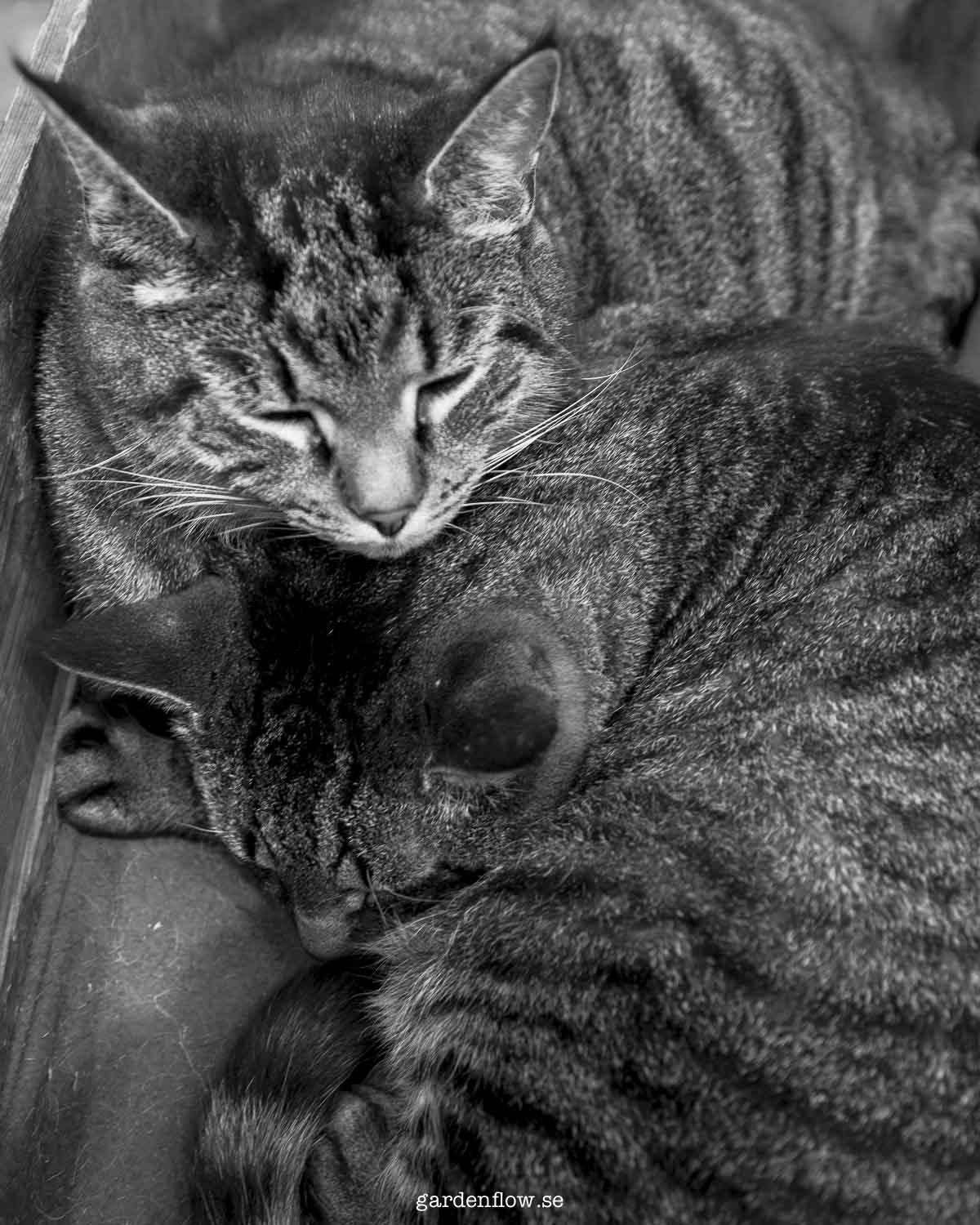 Ulriksdal’s own production of plants

Slottsträdgården Ulriksdal has a large production of their own plants, everything from perennials to seasonal flowers and houseplants. Approximately 120 different species are being grown, of which half a million are houseplants. When I’m meeting Mona everyone are busy with planting small plants of Saintpaulia. The many thousands of poinsettias, which are still green, are in several of the greenhouses. I’m getting a tour of behind the scenes and get to see not only poinsettias in rows, but also spring flowers on growth. This is something I really enjoy, the growing and the process behind. My first internship was at a garden center, where I got to school out small plants. A lot of them. You would think this would tire out a 14 year old, but no, I was fascinated already at that age. 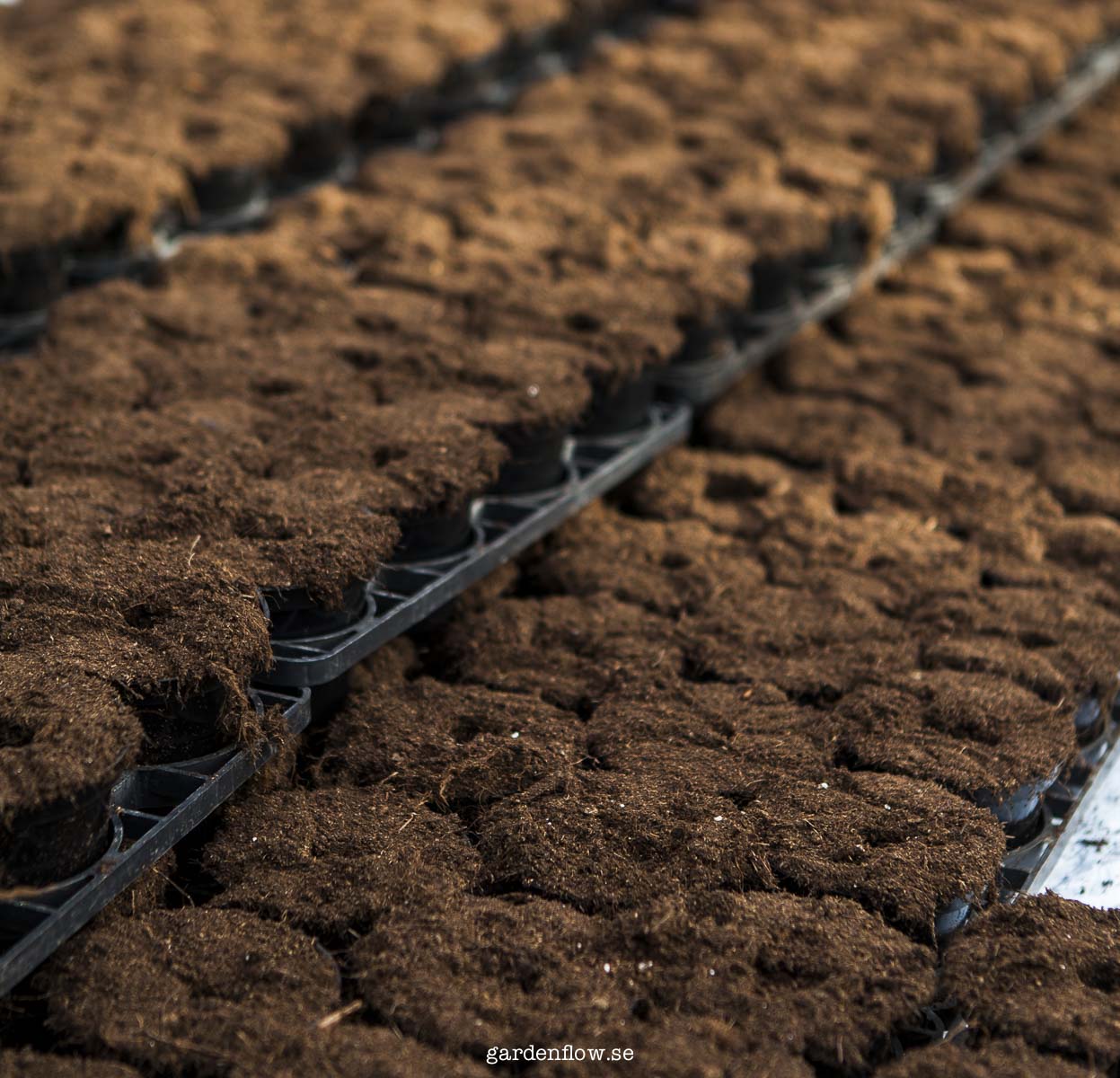 What sells most when it comes to the assortment of their own plants are geraniums and poinsettias. The streptocarpus and saintpaulia are popular in January and February, as well as begonias with beautiful foliage, which is a new hit during its showing. During those first two months of the year, the self serve of tulips is something that many visitors take the chance to do, to cut flowers for their own spring bouquet. Except for the houseplants, the greenhouses produce a large number or perennials of different kinds, and nowadays they are also sold in larger sizes in the summers for those who like to quickly fill their flowerbeds or pots. Plants which fits well in outdoor pots are also very popular, as well as heuchera, ajuga reptans, sedums, different kinds of autumnal bedding plants and poinsettias. Seasonal flowers such as pansies, grassleaf spurge, and others are also being sold in great numbers. A couple of days after my visit, approximately 9000 amaryllis of which 84 varieties where delivered. Mona tells me that Ulriksdal becomes just like Santa’s workshop when all the bulbs are being potted. Amaryllis is with no doubt their most popular Christmas flower. Even the cut amaryllis is also highly liked. 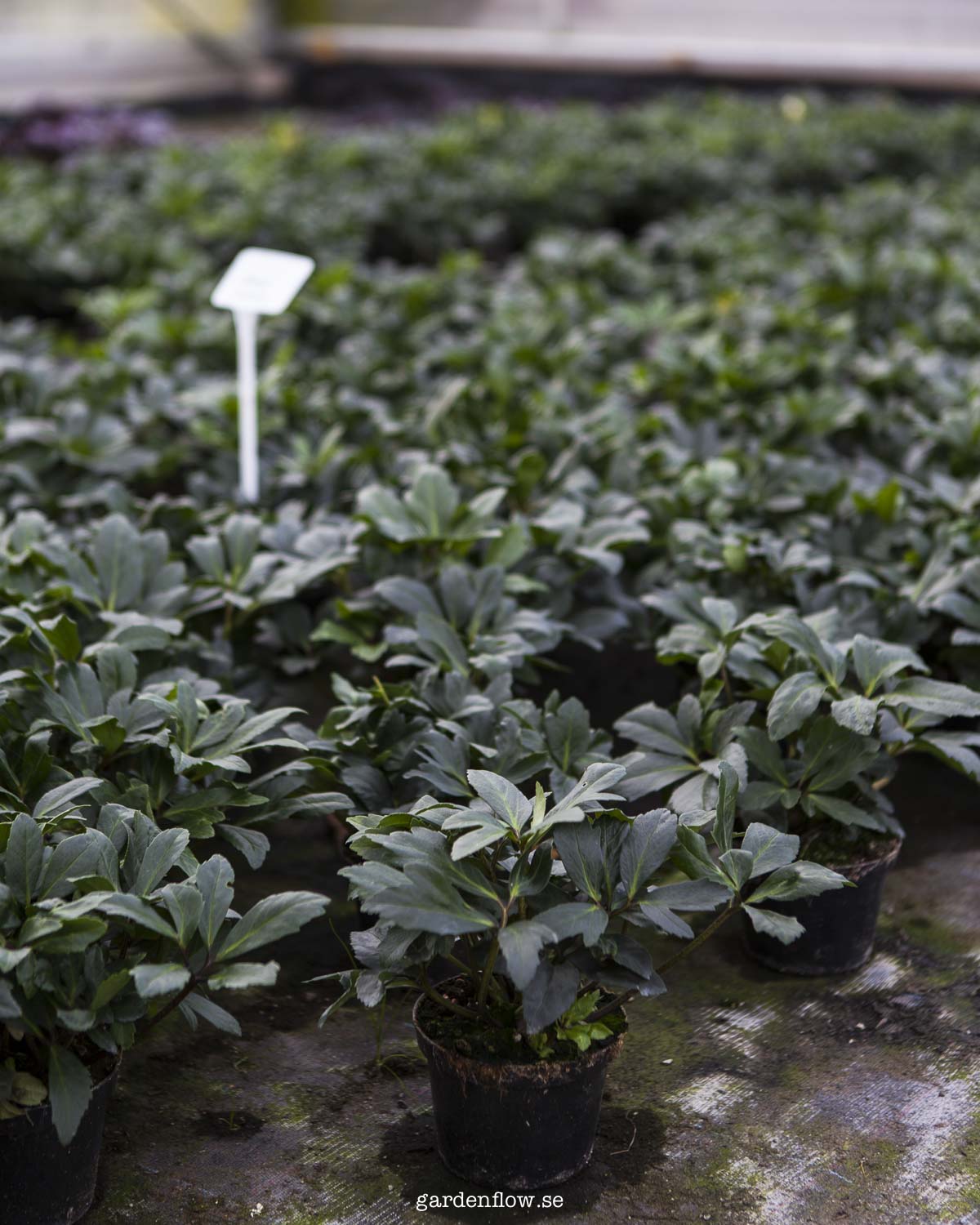 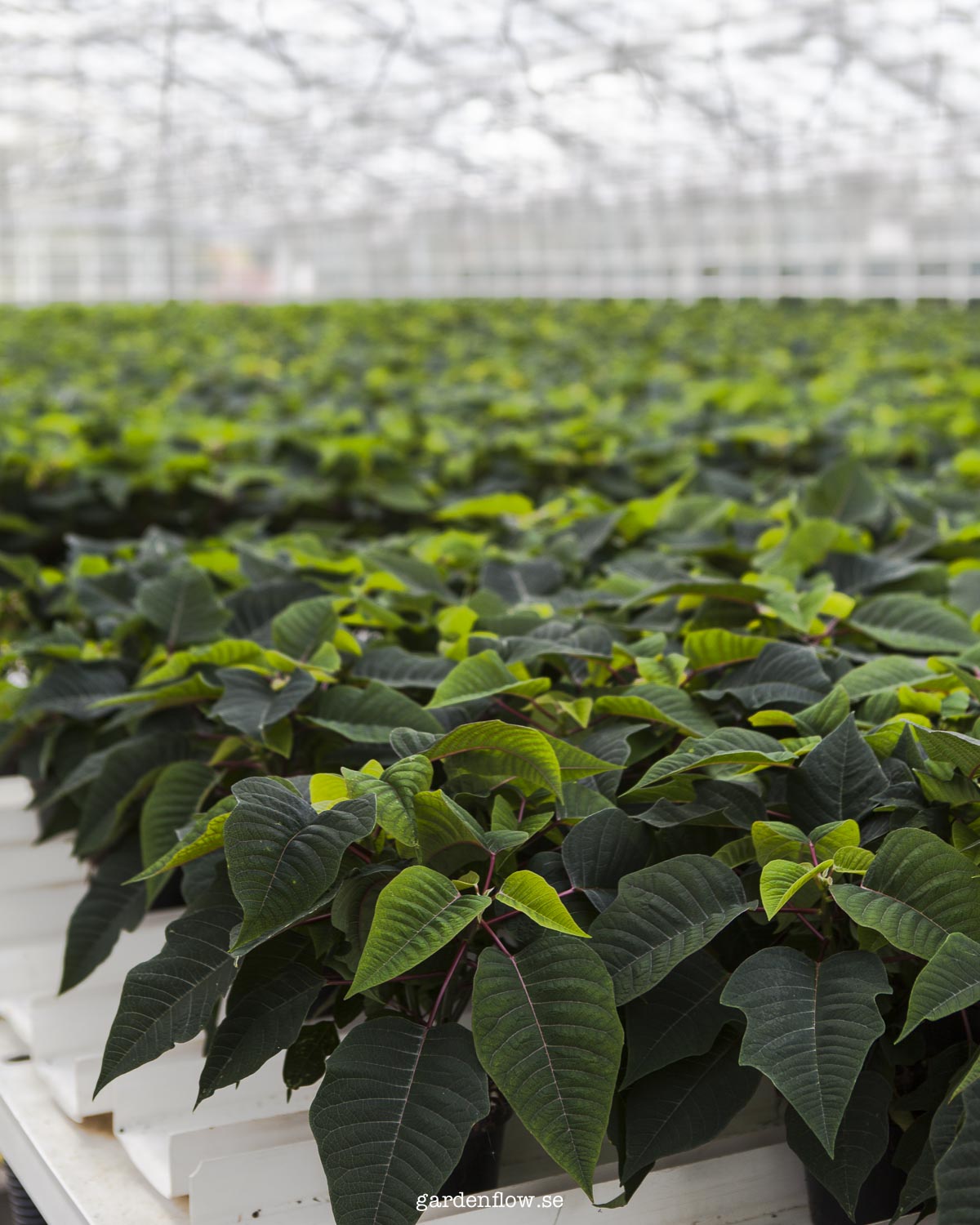 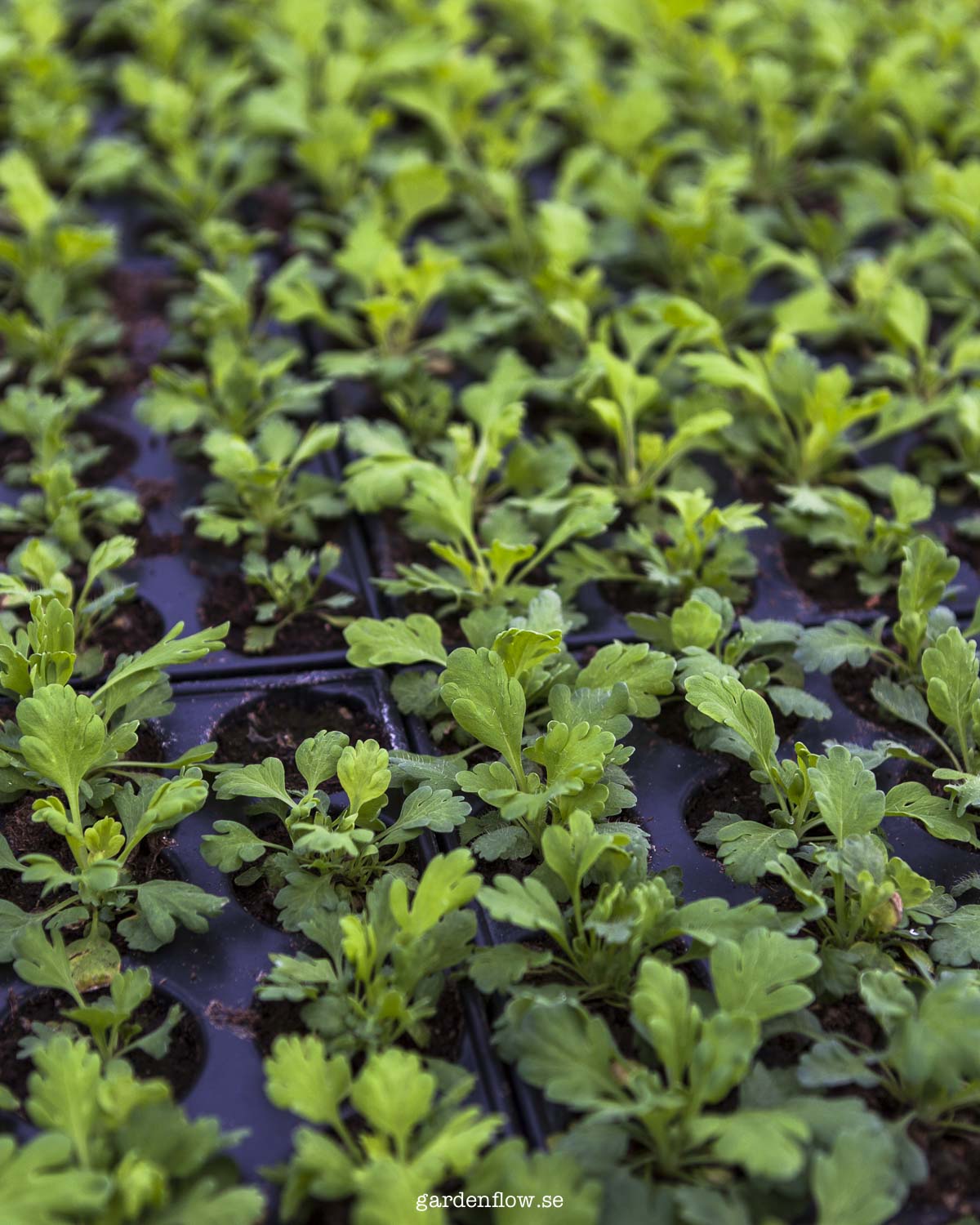 The cropland with vegetables and flowers

An important and very popular part of Slottsträdgården Ulriksdal’s business is the cropland, which is open during the growing season starting in the early summer until late autumn. The ambition with the cropland is to offer gardening experience to everyone, and especially for those who doesn’t have access to their own garden. To show and offer an organic growing is also something important. The cropland is no doubt appreciated and liked by many, and it draws a great number of visitors, who can on their own pick and choose between all kinds of flowers and eatables to put in their basket. 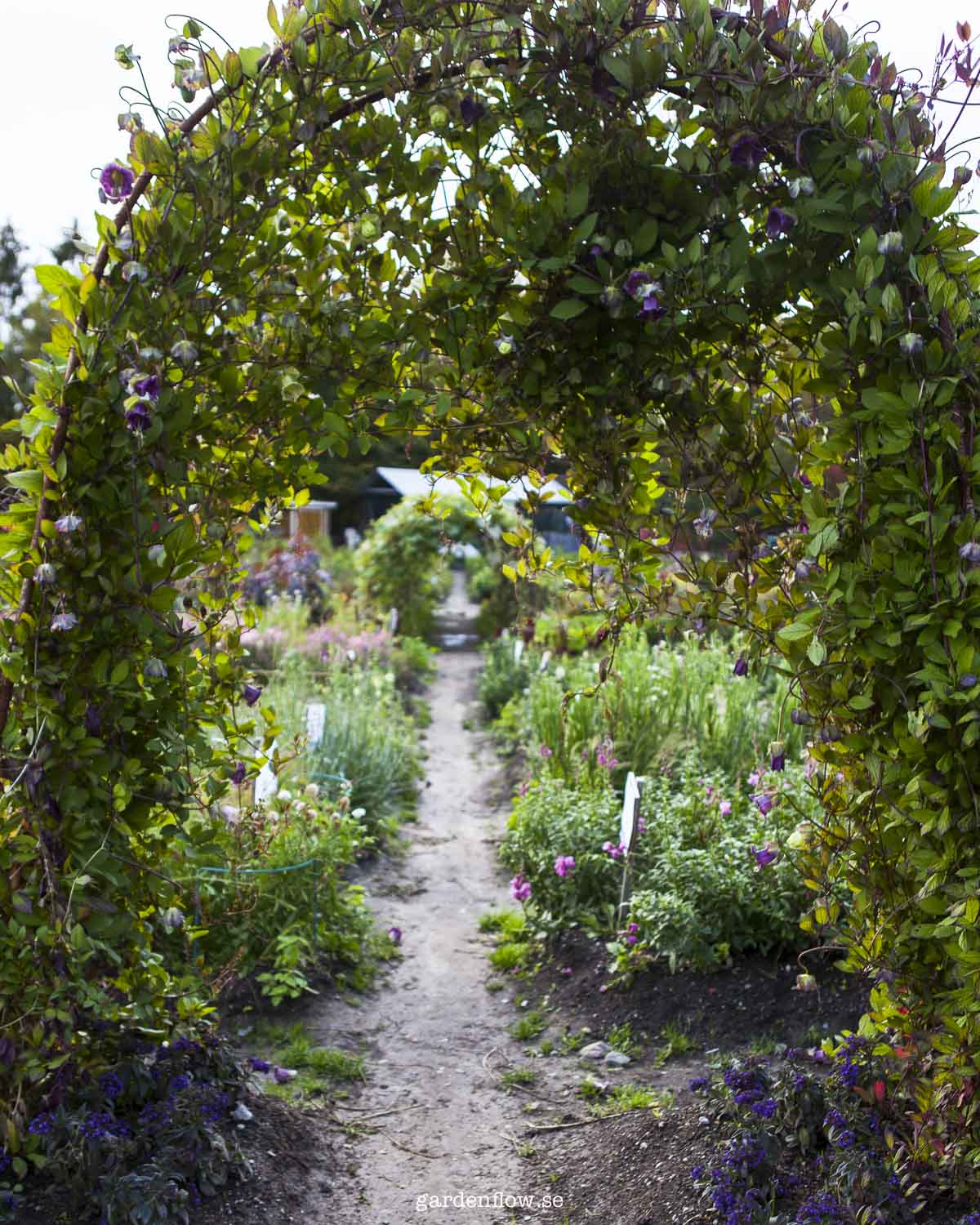 Both flowers and vegetables and grown and seeded in batches so that they will have as long harvest period as possible. The vegetables are getting more and more popular, which is no surprise really. To visit Ulriksdal and harvest your own vegetables must be as close it gets to growing it yourself without having your own vegetable garden. 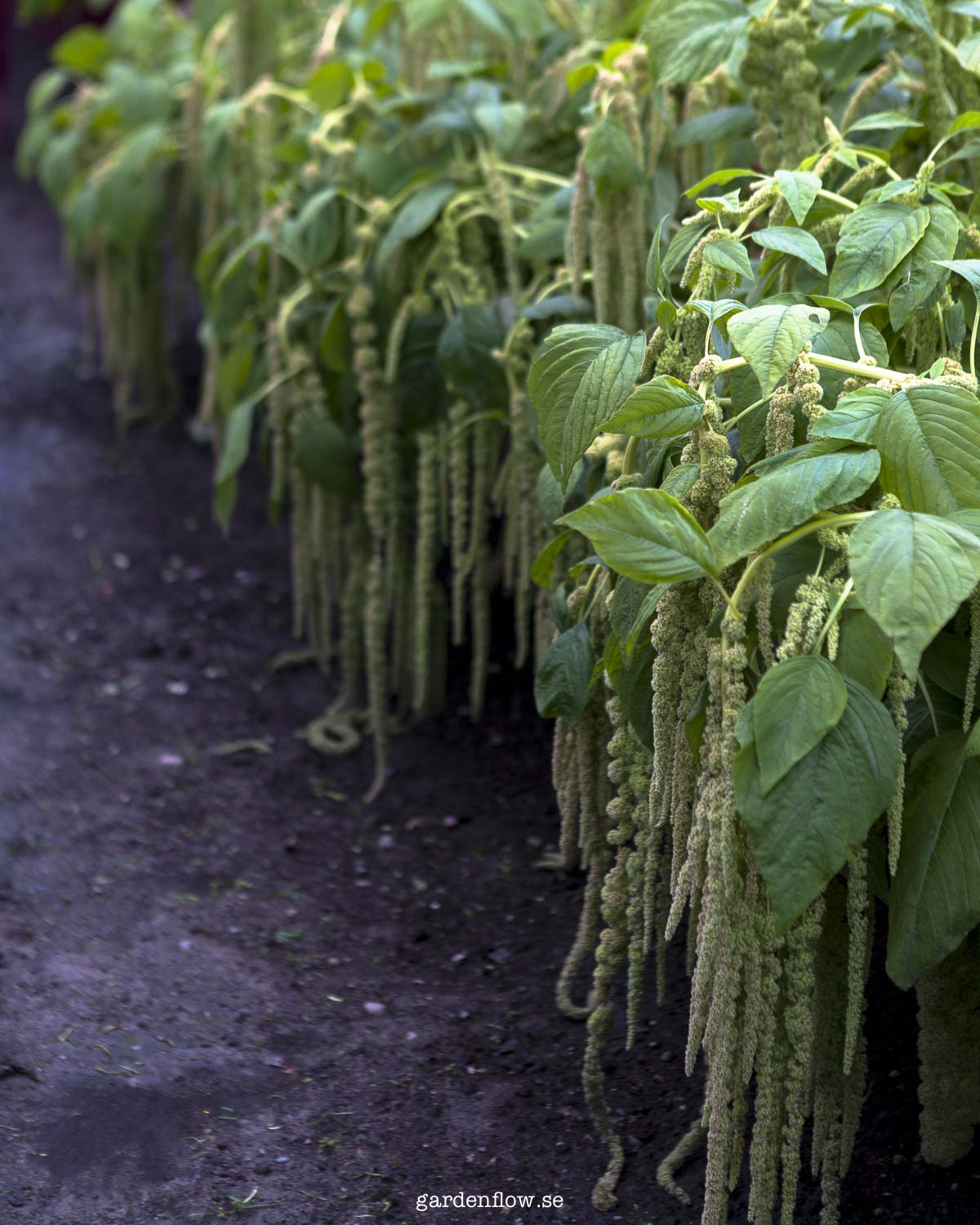 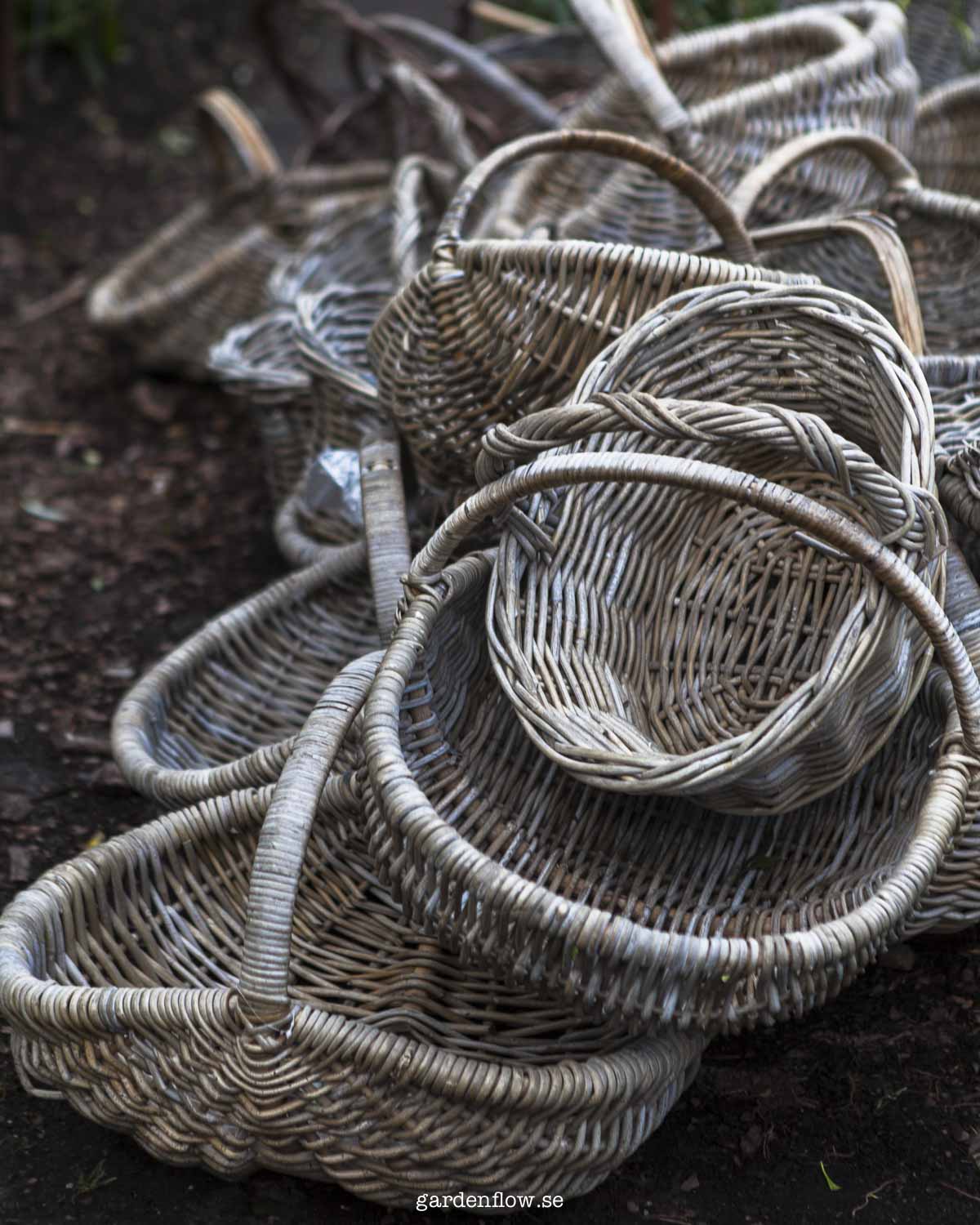 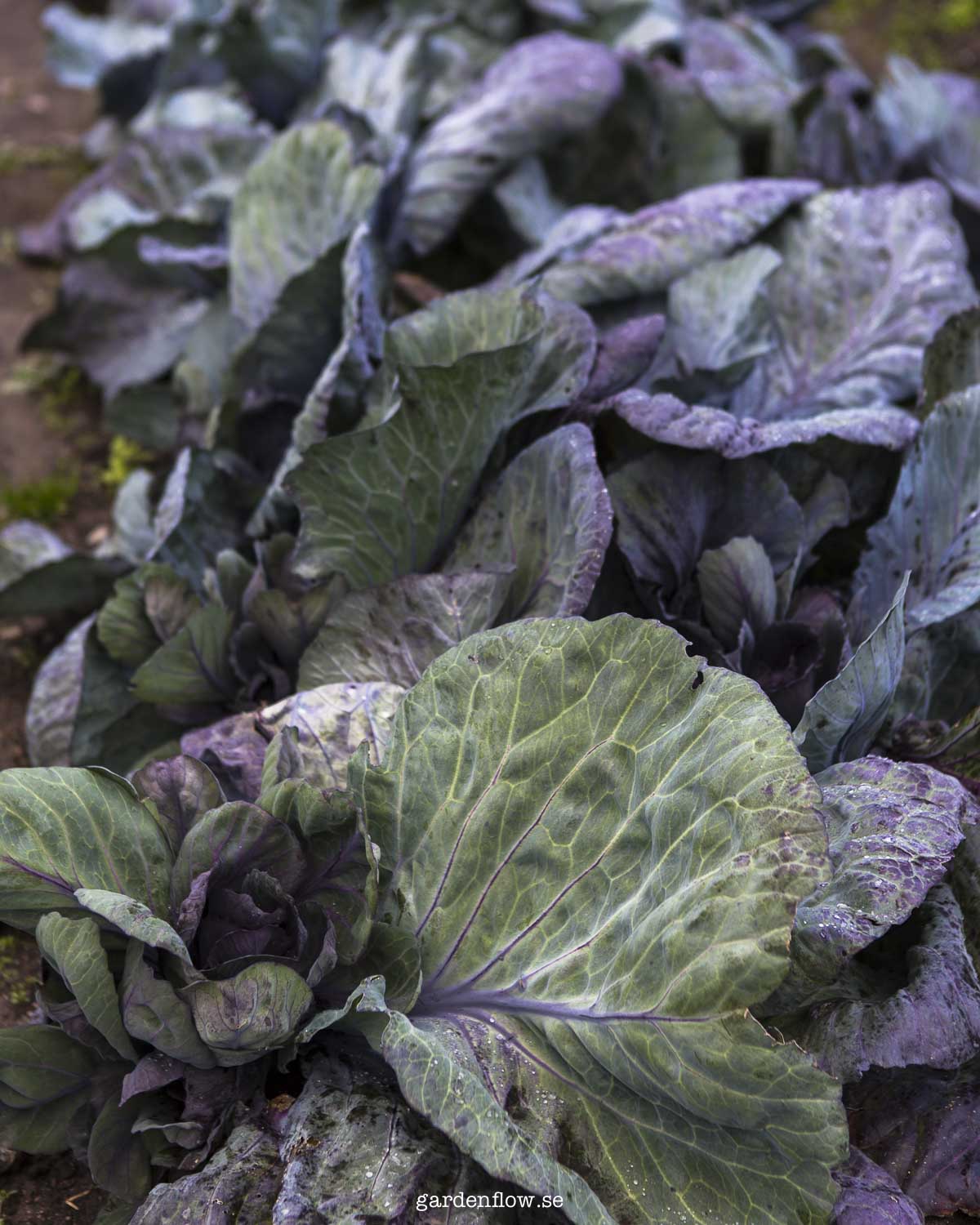 We talk on a few occasions after my visit, and one of those times the team that is responsible for the greenhouse sales areas had just got back from a trip from Holland where they had been handpicking new houseplants, many of which where very large. I’m asking about the trend right now and am finding out that what people want to have are being able to create an outdoor environment indoors. The plants can’t be too big, but they need to feel like outdoor plants. Large plants on stem, which are perceived as small trees, are extra popular. Monstera with its jungle-like leafs is popular even ficus. 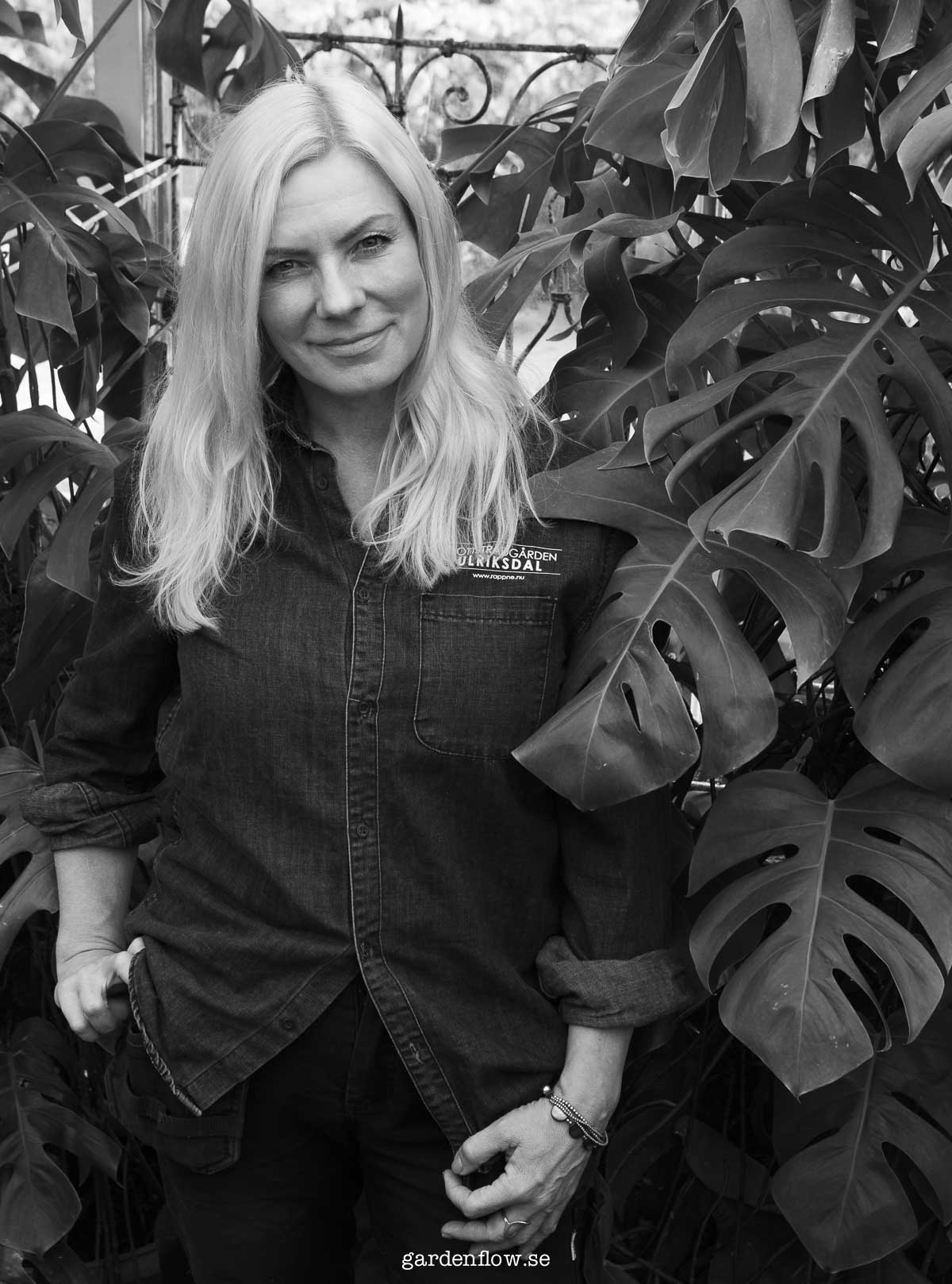 The last few days Mona and her team have been busy preparing the final details for their annual Winternight, which is arranged in the greenhouses on November 16th. There will be plenty of inspiration, bubbles and snacks. Mona is in her best m and makes a footprint in the settings that is being built and the experience the visitors will get. I am returning to my first impression when Mona tells me about her role at Ulriksdal, and how she glows when she is talking about what she does. It inspires. People who have found their place doing what they like, and also inspires others with it.

Behind the pen and the camera
/Charlotte