To visit Sanda cottage, or Veronica and Stefans garden outside Stockholm, is like stepping into a different world. A world where passion and eagerness to create their own paradise on earth is the fuel that drives them to spend a big part of their free time in the garden.The fact that Stefan is handy and Veronica has a feeling for plants makes it quick and smooth to implement their ideas that pop up. And that happens often. 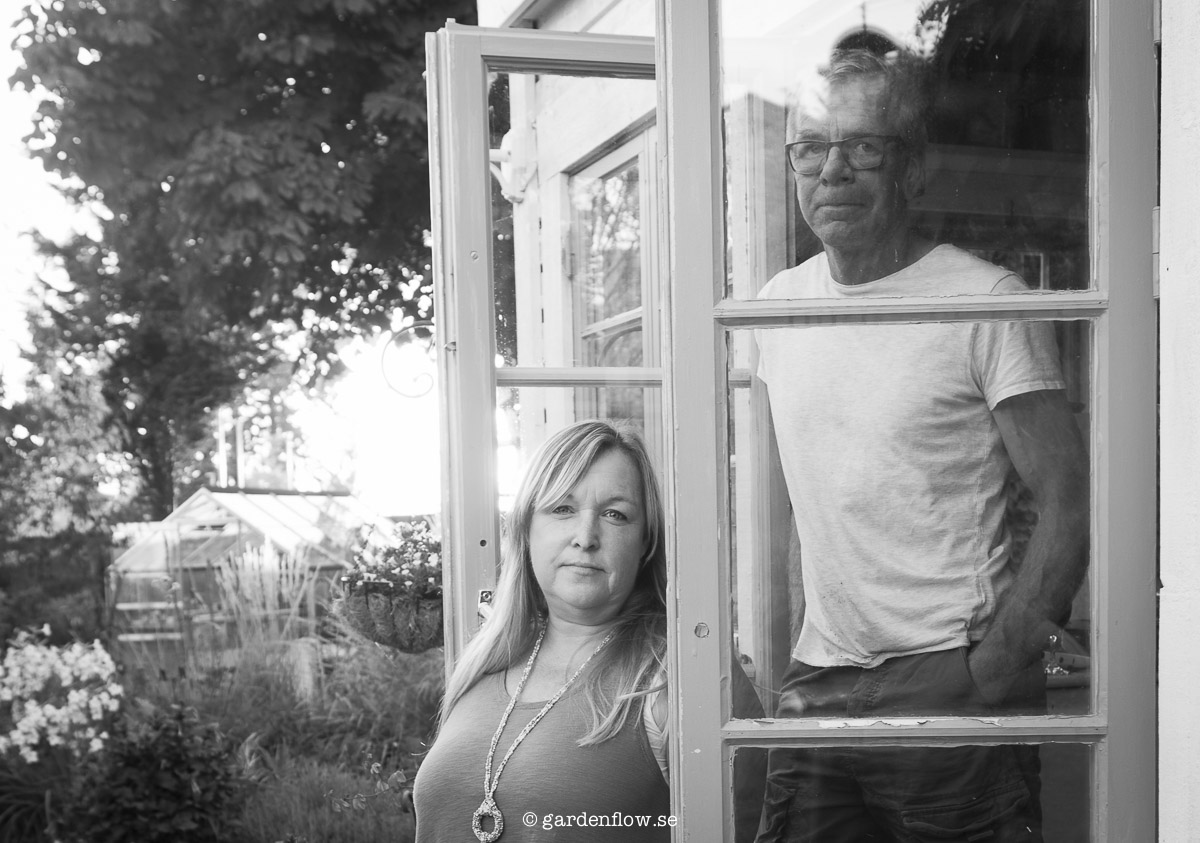 It started with two allotments

A lot in the garden is recycled, a bargain find, given or bought through ads. During eight years the garden has grown in a dynamic and loving way and today there are not many square metres left of the original lawn. Their interest for growing and gardening started when Veronica and Stefan got the opportunity to take on a newly available allotment near their previous terraced house. Quite quickly they broke the pattern in the allotment area, where all vegetable growing had been done in traditional straight rows and started to grow vegetables in creative shapes, mixed in flowers and built a happy and imaginative place. When the allotment next to theirs become available they took that one on as well. By this time the rumours had spread regarding their creative cultivation and a lot of interested passers by stopped to get a glimpse of what they were doing. For 10 years they put their souls into the allotments before they decided to buy a house to get access to a garden ’ for real’. Their requirement during the house hunt was for the garden to have an old established foundation. They did not fancy starting from scratch again like they had done with the allotments 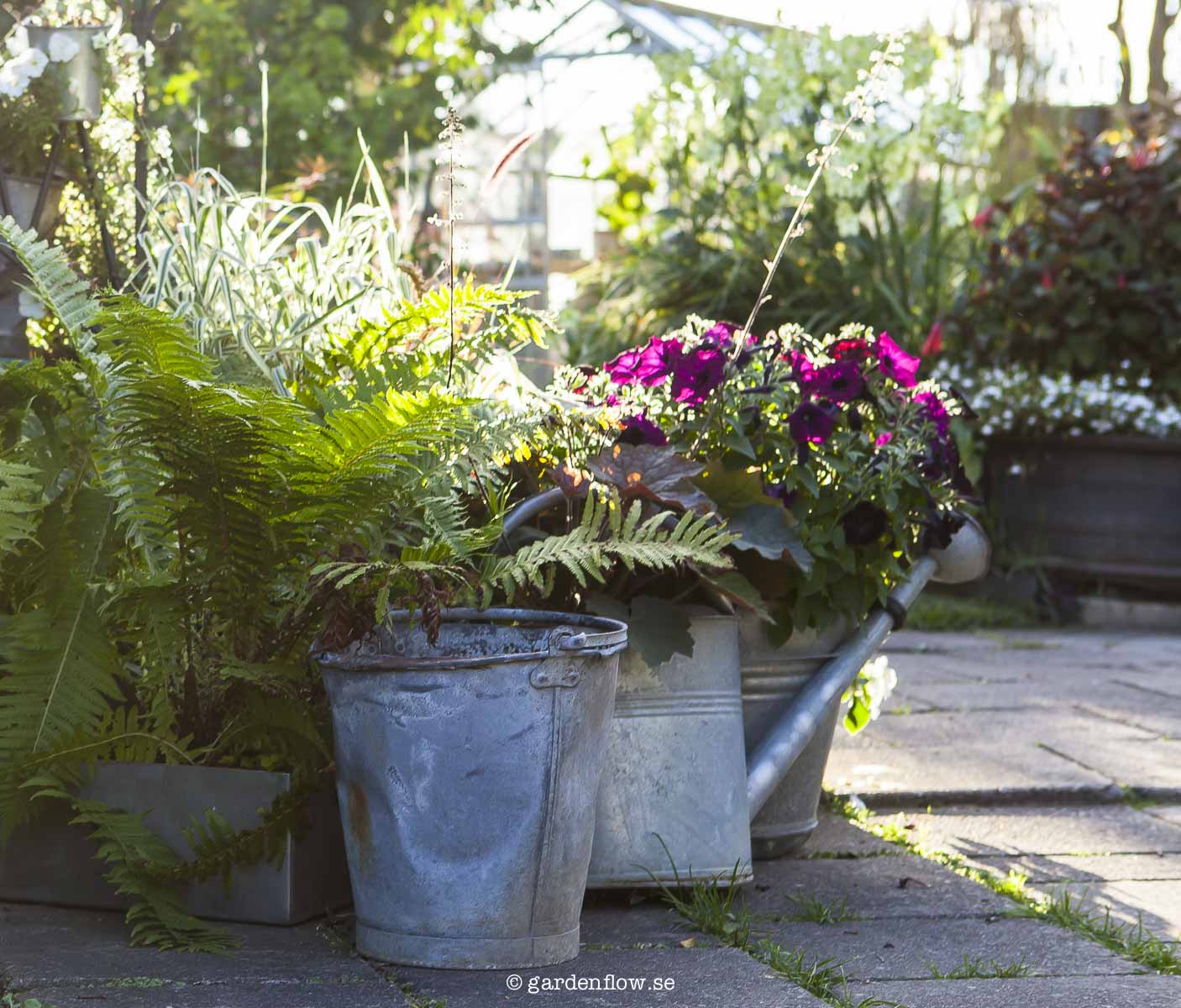 Where do the ideas come from?

When you move around on the walkway through the different ’rooms’ it’s hard not to wonder how Veronica and Stefan get all their ideas. When I ask I get the reply –’coincidence’. It can be a plant, a food image, building material that they have acquired or a second hand find that gets them started. 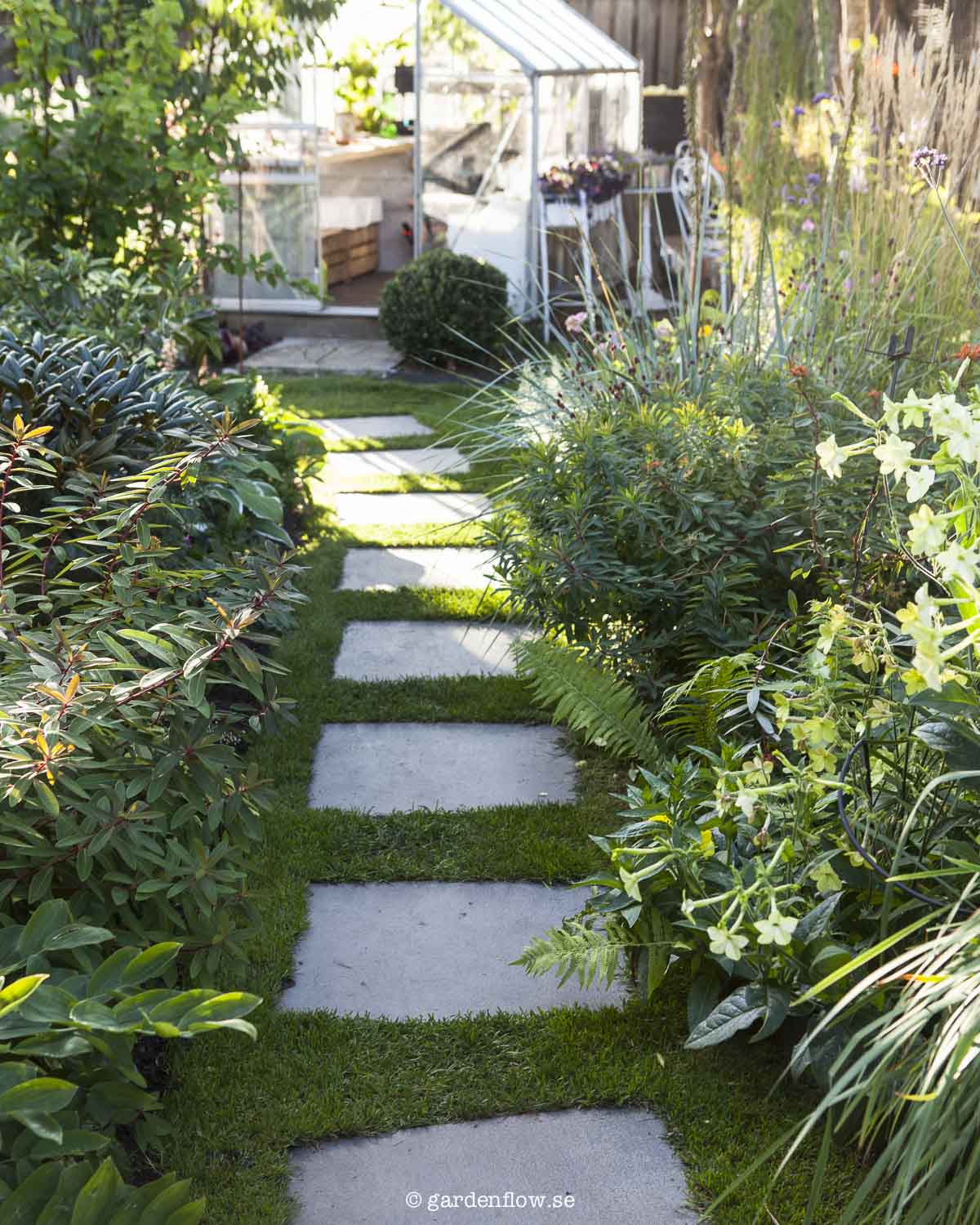 The path is made out of big clinker tiles. Clever!

We have learnt as we have gone along and grown with the garden.

During the time the garden has developed so has the knowledge and experience. –’In the beginning we did not know much’ says Veronica. Quite a big part of their plants they have been given on different occasions, often without a name. With a great passion for discovery they have been planted and not until the next season been figured out. 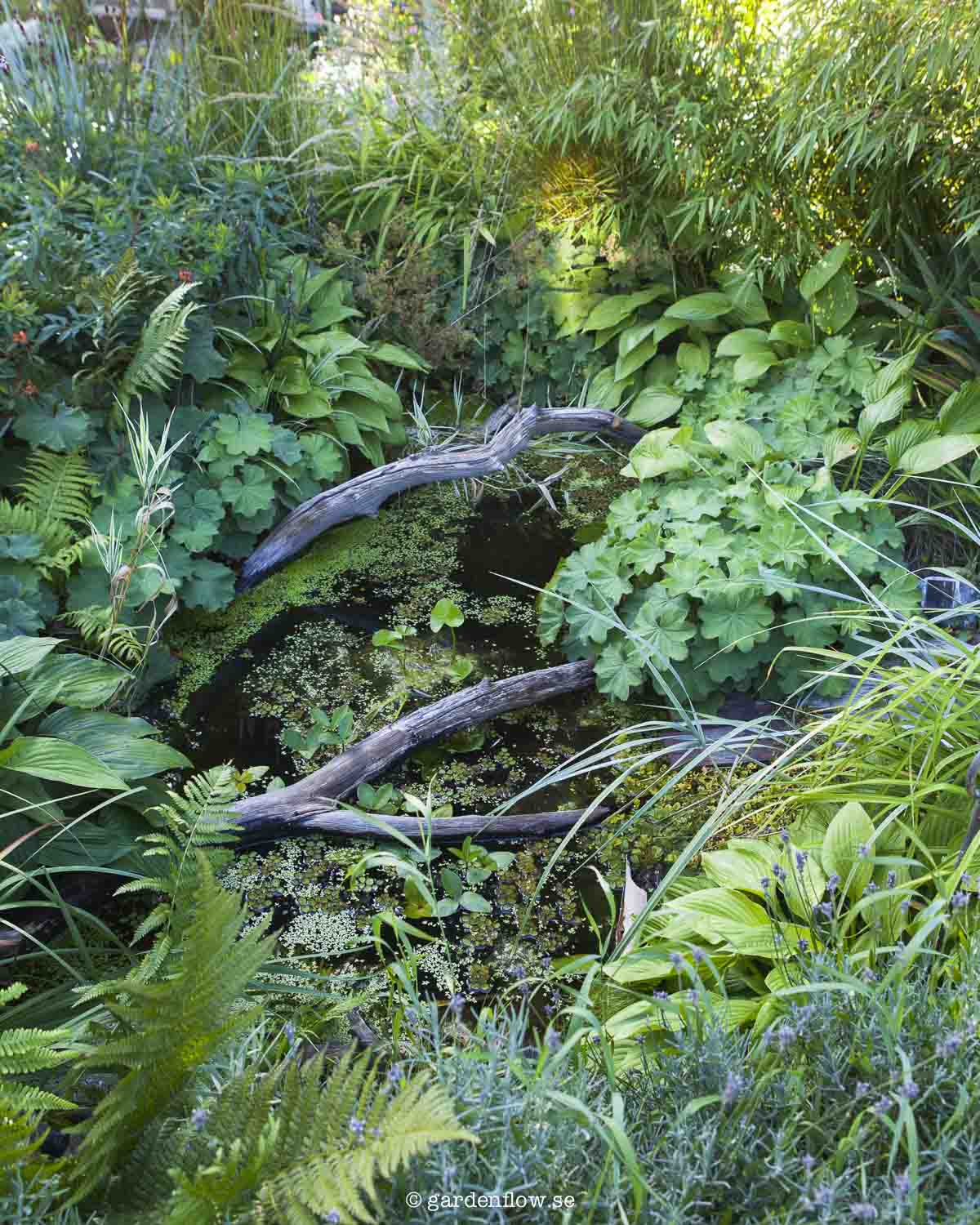 Dammen mitt i trädgården är vackert inbäddad i växter. The pond in the middle of the garden is beautifully embedded with plants. 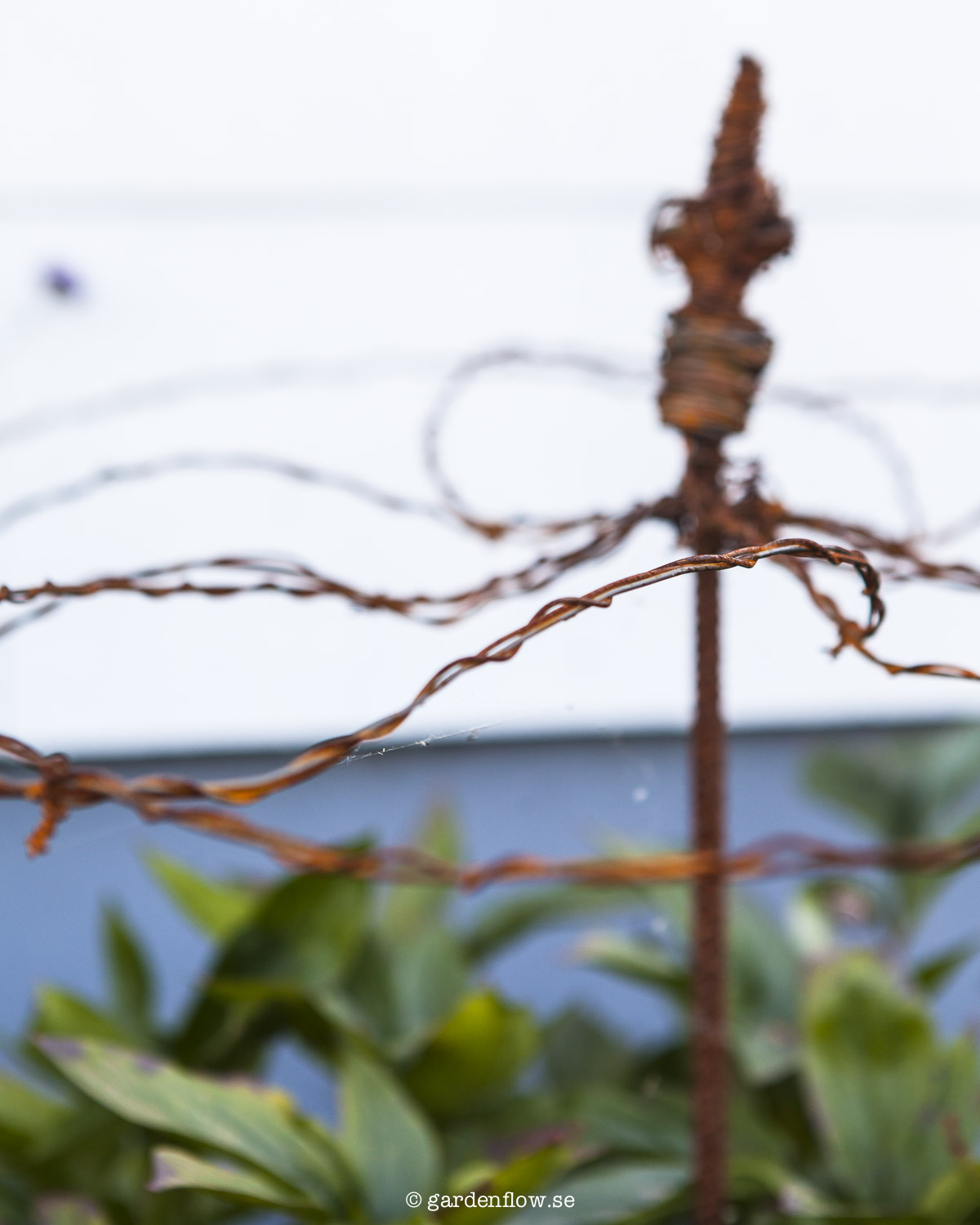 The garden is our playground, but also where we recuperate as well.

Since the gardens different parts grow according to the ideas that pop up there is no plan. It has never been an ambition to make the garden feel designed or completed. The point with Veronca and Stefan’s garden is for it to be a playground, a place for rest, a green calm and a paradise for them to live in. And that is also how the visitors experience it. It feels like stepping right into their house and living space, although outdoors.  The framing, made out of an old privet hedge and a fence, makes the microclimate very favourable and gives the 1,000 square metre large plot sturdy outer walls. Here nothing is forbidden in colour or plants. Everything that catches primarily Veronicas interest could be found here. Since most of the plants are finds there can be unexpected plants and combinations. 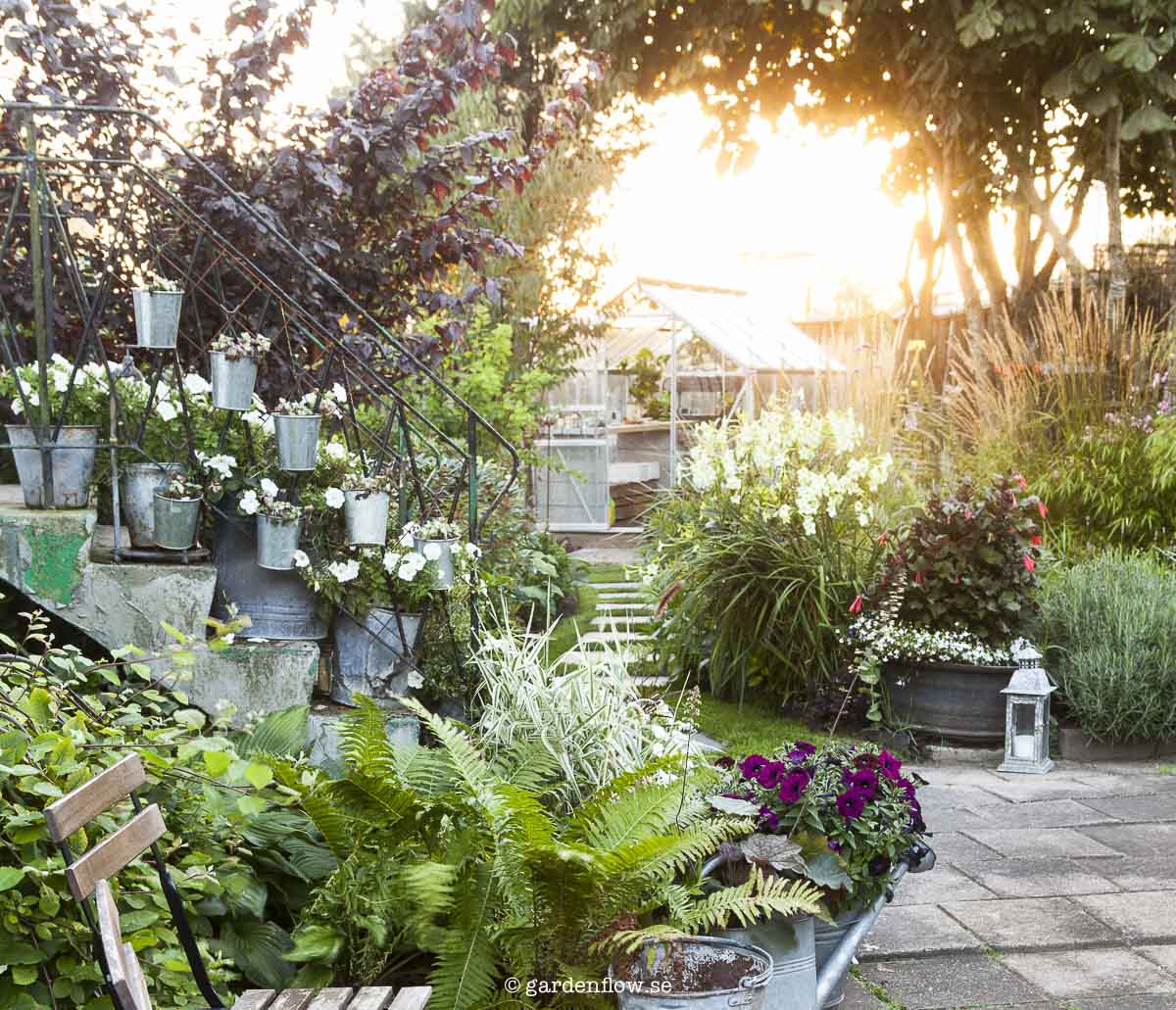 The inspiration comes from the English gardens and particularly cottage gardens. Without a doubt, Sanda cottage is a Swedish version of an English cottage garden. It has all the ingredients.

‘Making new flower beds is the most fun part. It definitely gets me going.’
Says Veronica. 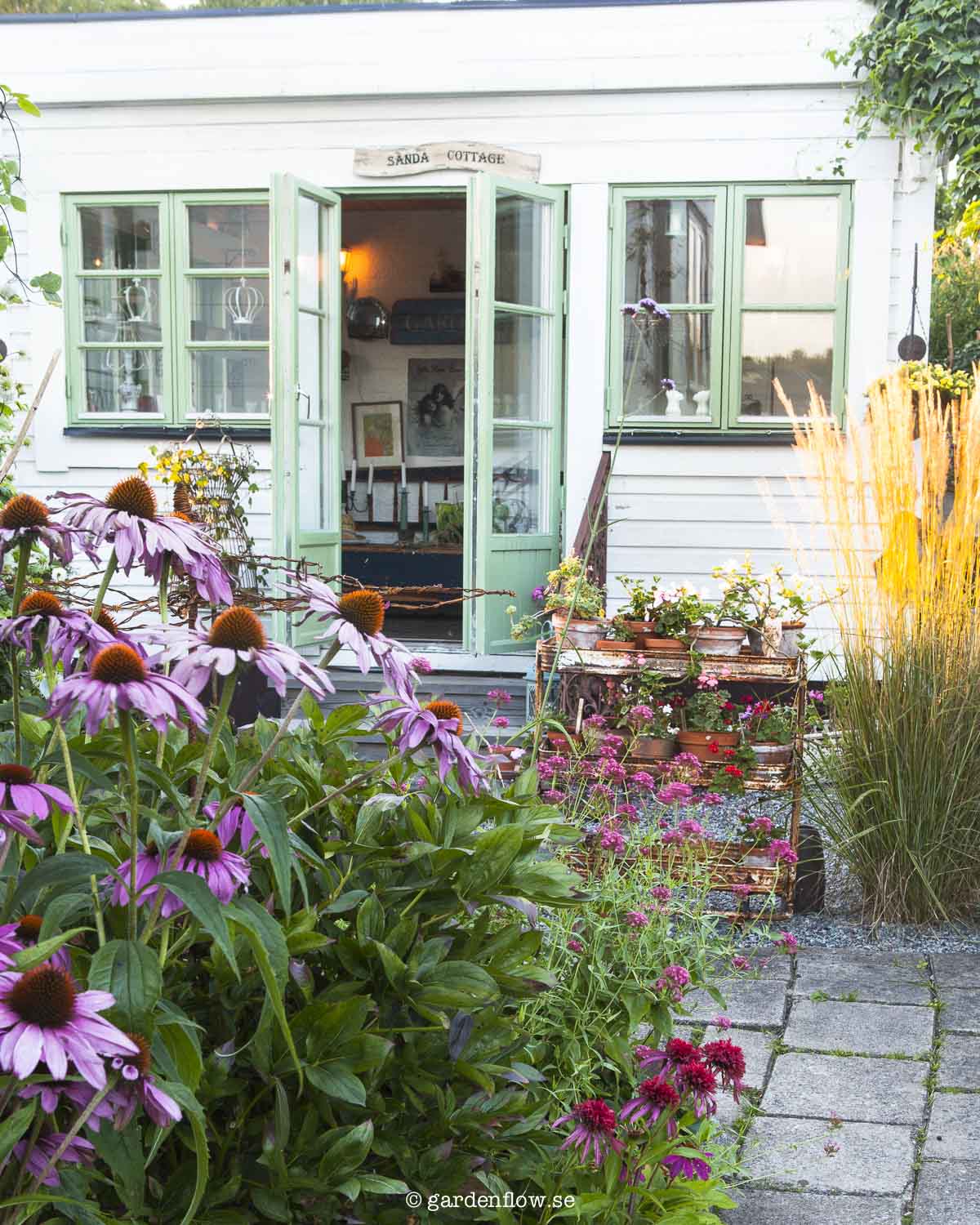 After reading an article a couple of years ago by Anna Hedrén (Anna vattenkanna), where she planted a composition in firey colours, the flower bed along the house wall came to be. It is the first you meet after walking up the stairs from the piazza on the way to the entrance of the house. Here orange, red and purple in different shades weave into each other in a powerful but soft way. Wow how I love that colour explosion just for that reason. Strong colours together does not need to be a combination that feels hard or challenging. In early spring the blooming starts with the wild tulips ’Persian Pearl’ and ’Little Princess’, after that ’Ballerina’ and ’Purple Prince’ show up. Heucheras in red and orange can be found in several places and the aim with the garden is for it to be colourful through the whole season in to the late autumn. At my visit it was amongst others the Helenium sneezeweed ’Morheim Beauty’ and the Echinacea Purpureas ’Magnus’ and ’Hot Summer’ that dominated and kept the colours alive. 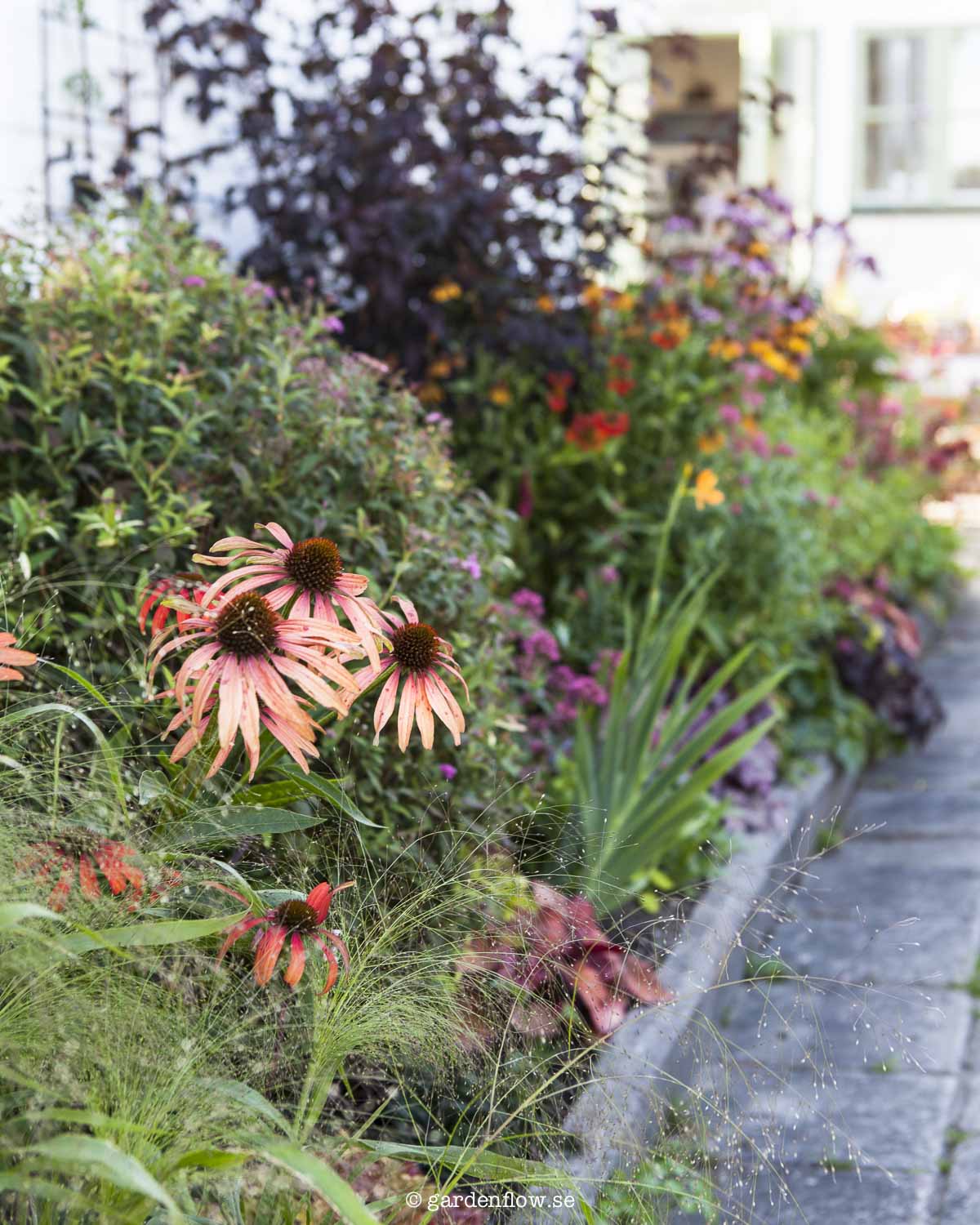 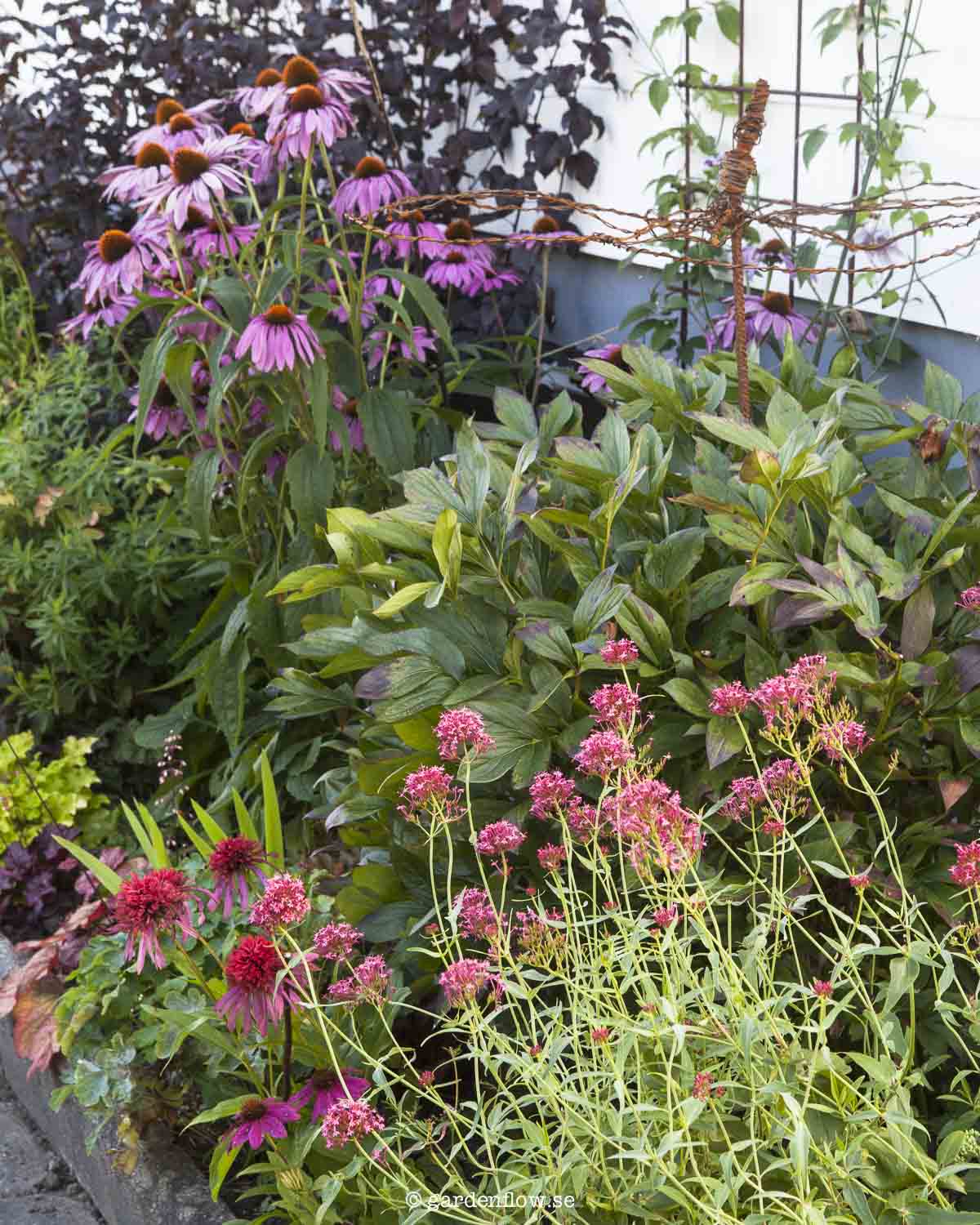 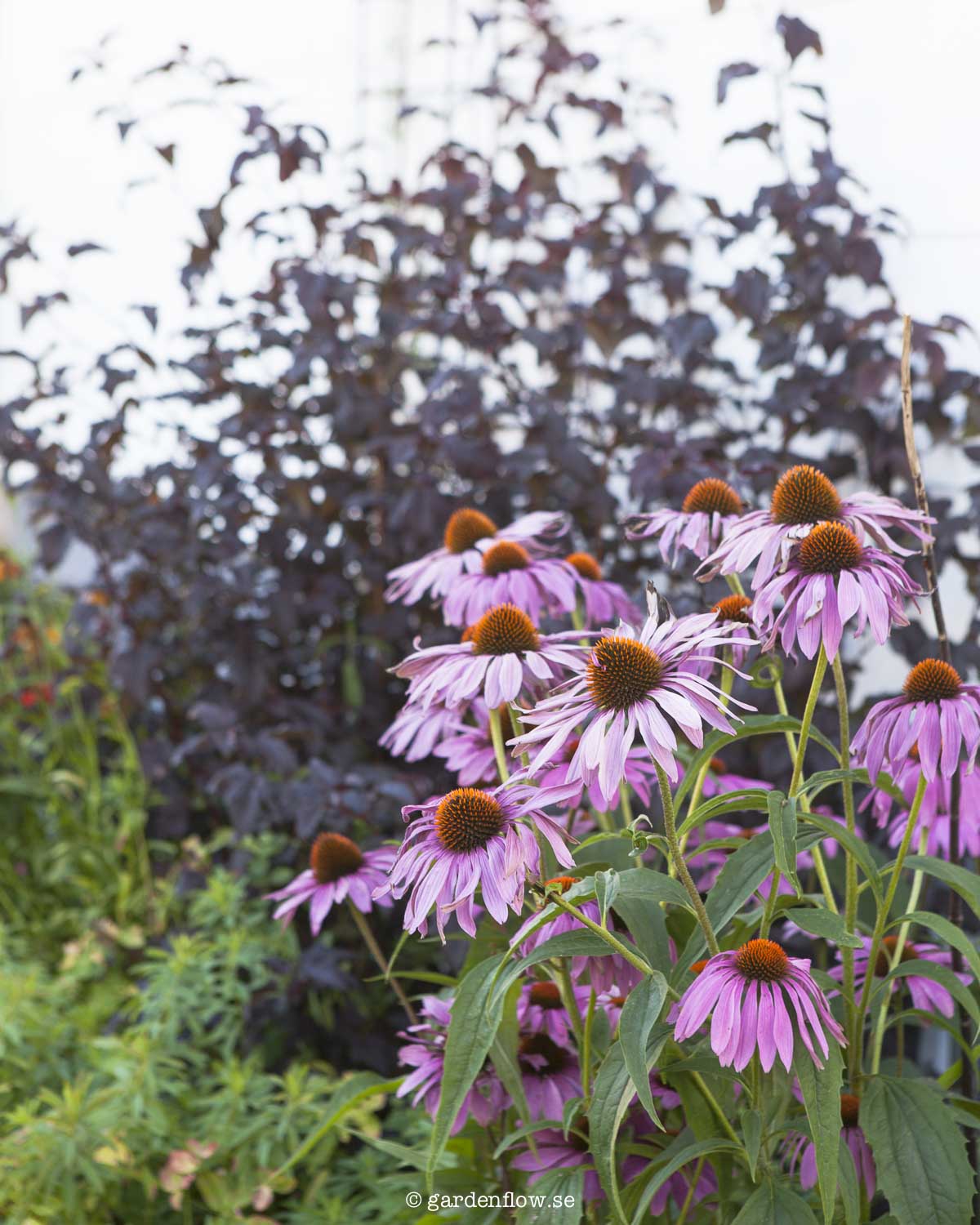 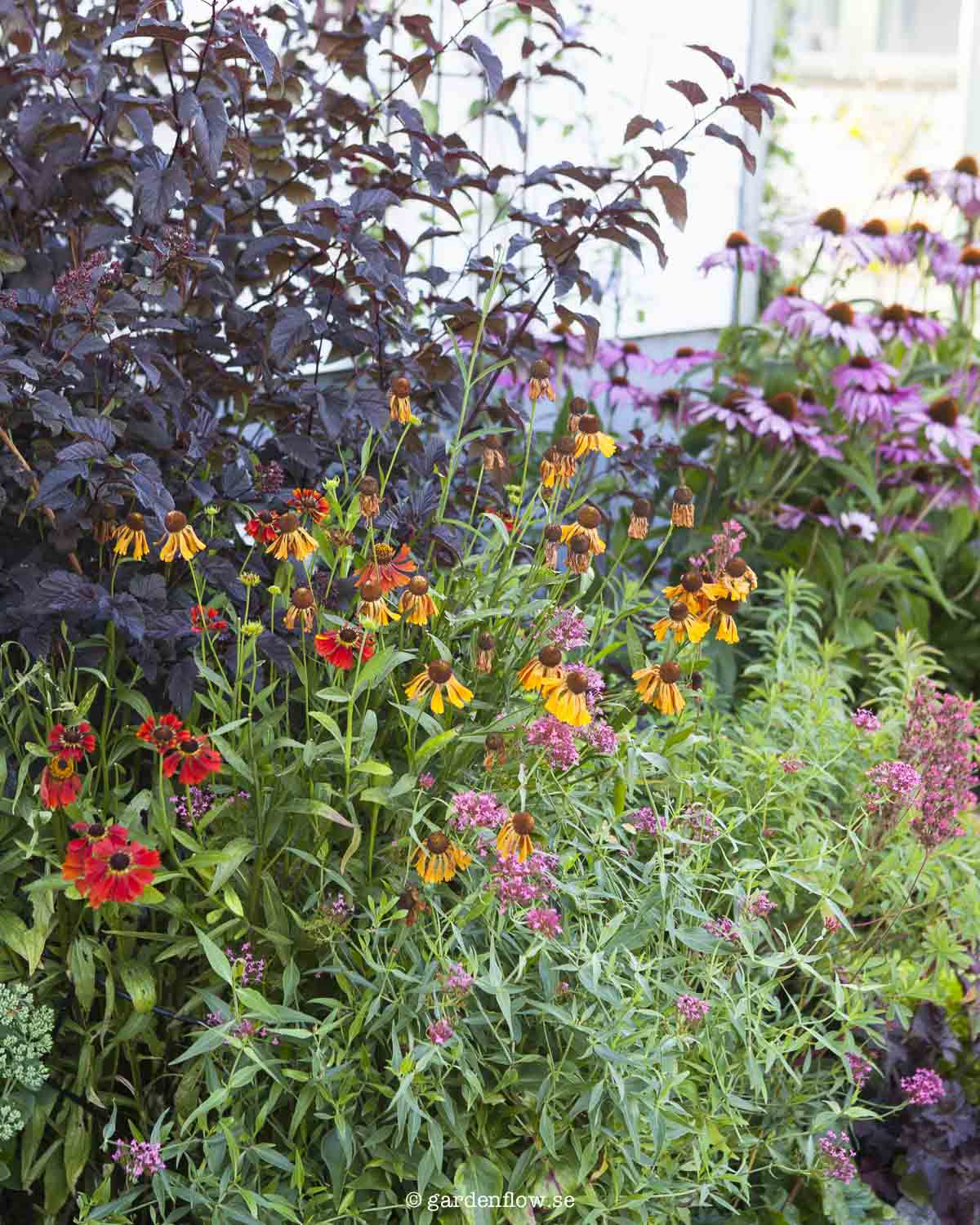 The path leads to the front door of the house.

And the flower beds greet you on your way there. 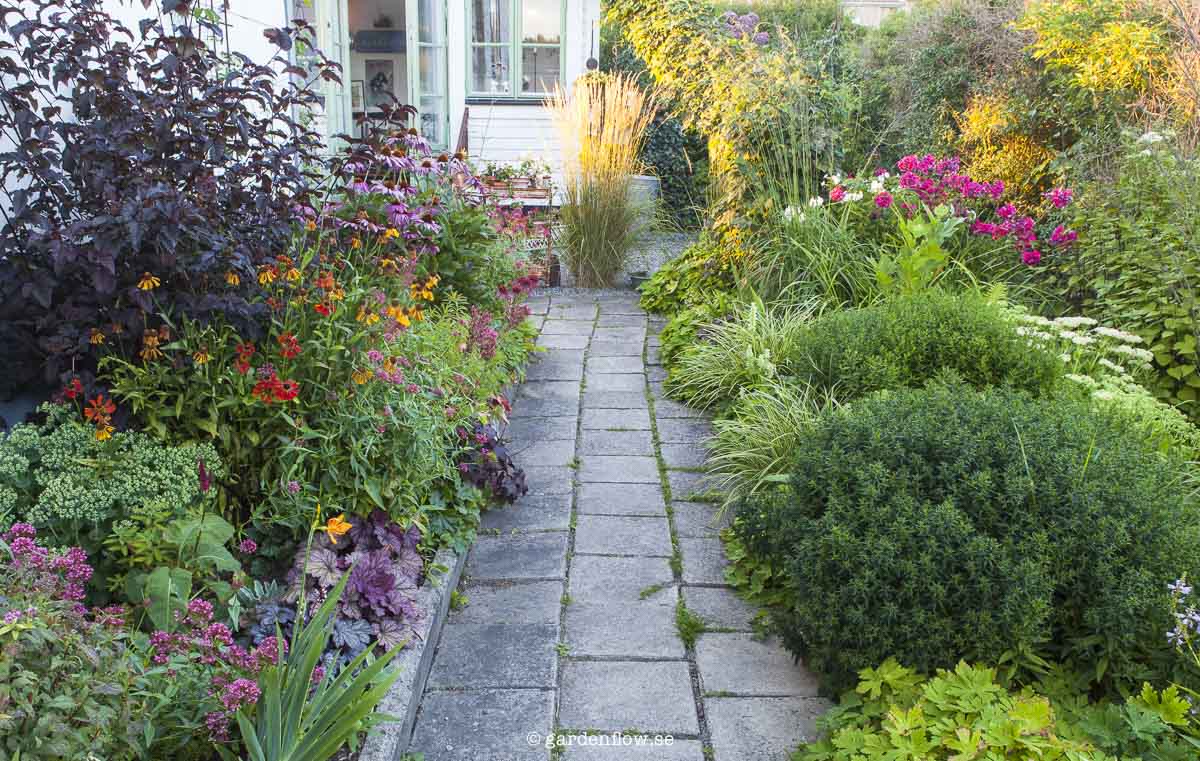 A wagon that actually is old.
One of Stefans finds. 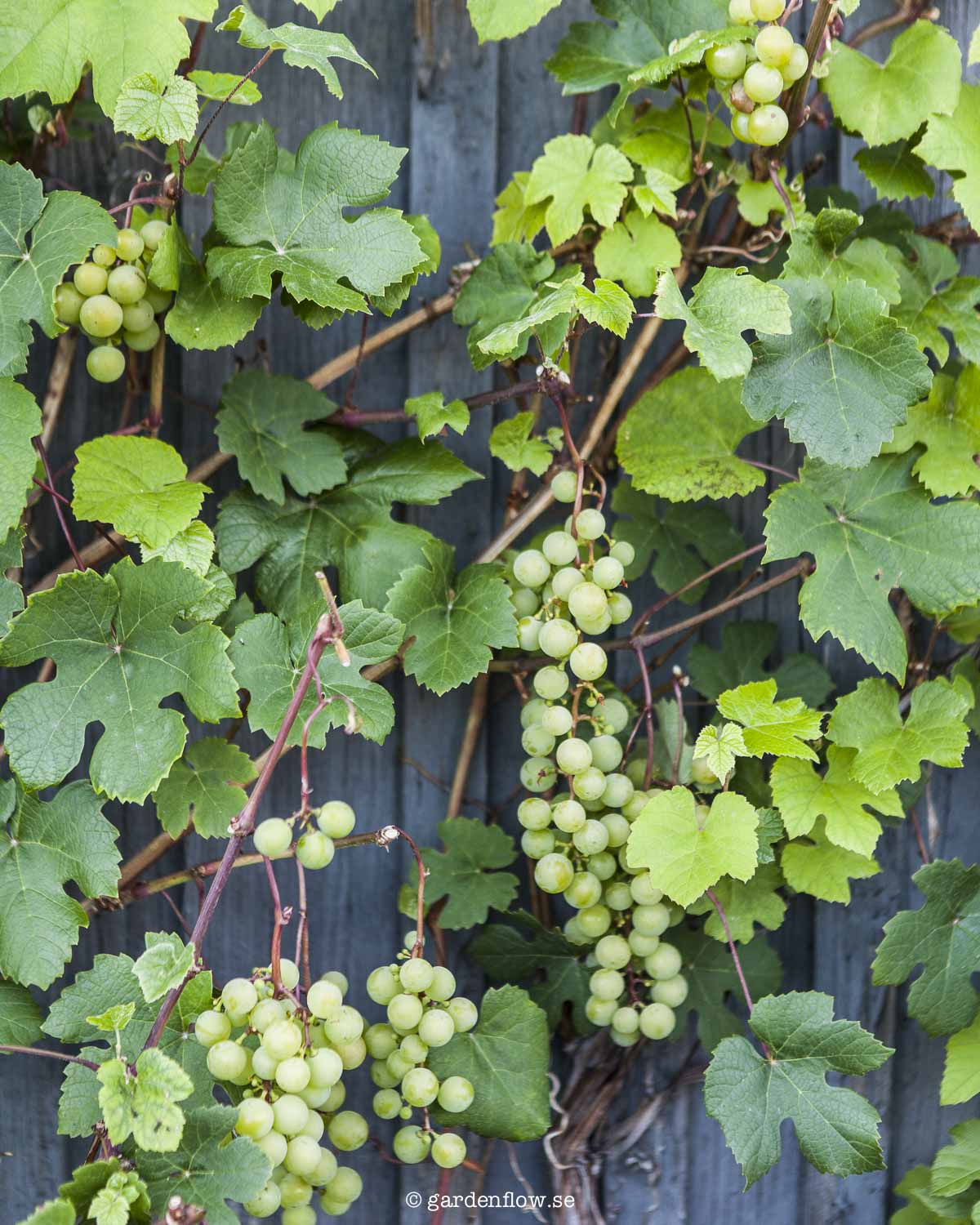 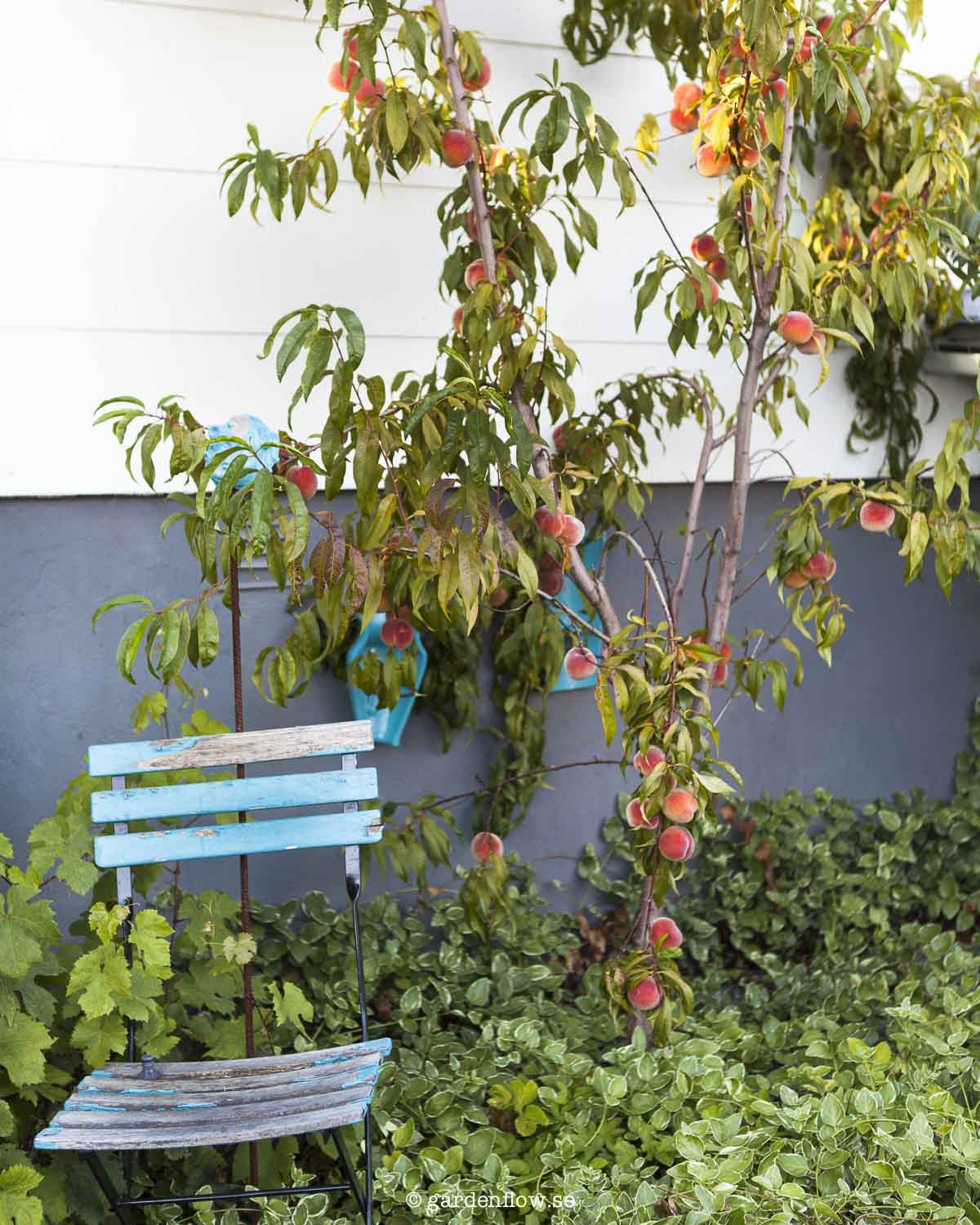 Den nu fem år gamla persikoträdet fick bo i kruka på balkongen de första åren. När den blev för stor planterades den i söderläge nedanför balkongen istället. /The now five year old peach tree was living in a pot on the balcony the first few years. When it got too big it got planted in a southern location below the balcony instead.

The Mediterranean around the corner

Why limit yourself. At Veronica and Stefans there is both a piazza and a Mediterranean south wall with both grapes and peaches. The former driveway with space for parking is now a piazza with tomatoes in tin cans, geraniums and scicilian café furniture. Veronica and Stefan felt that it was better to use the space for something nicer then parking cars. I can’t do anything but agree. 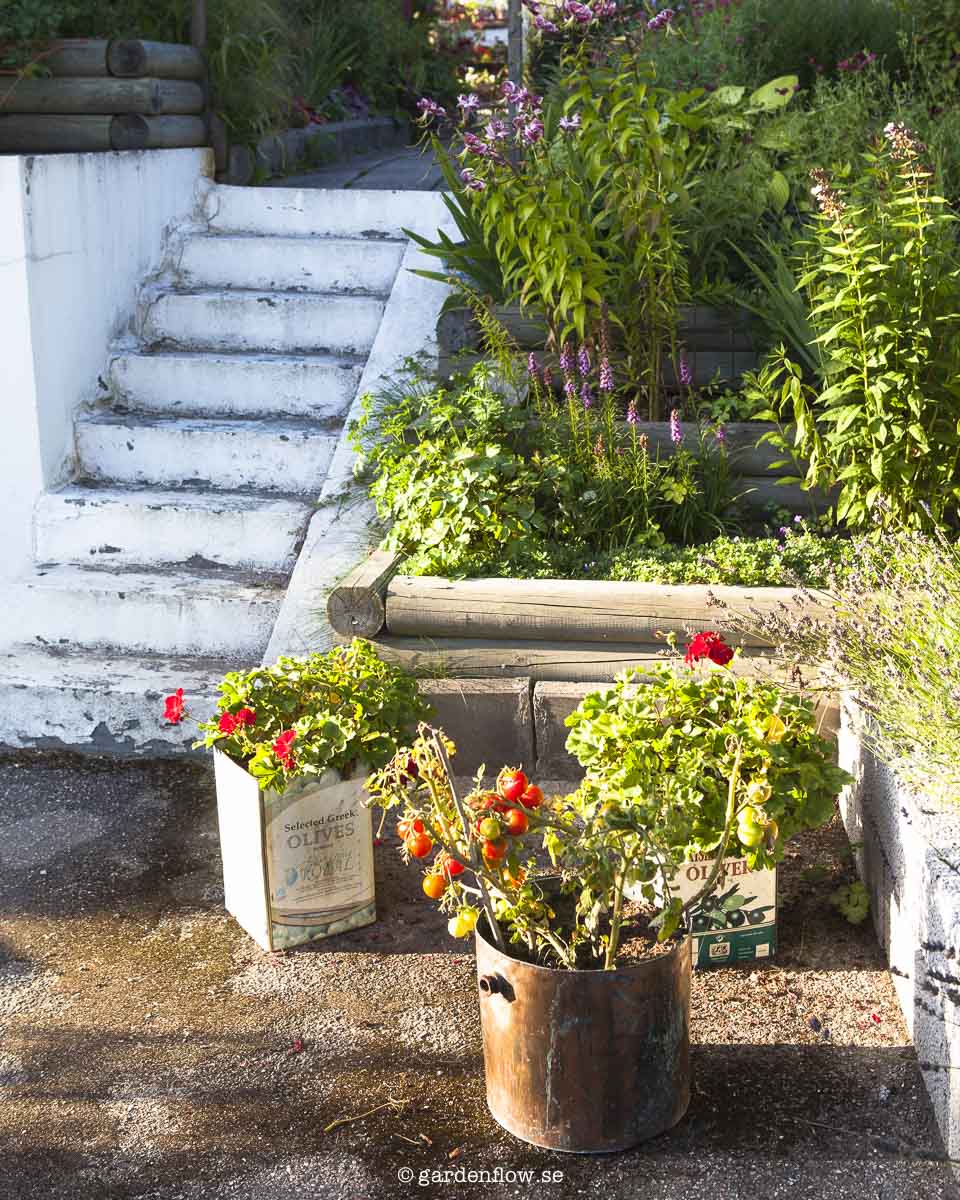 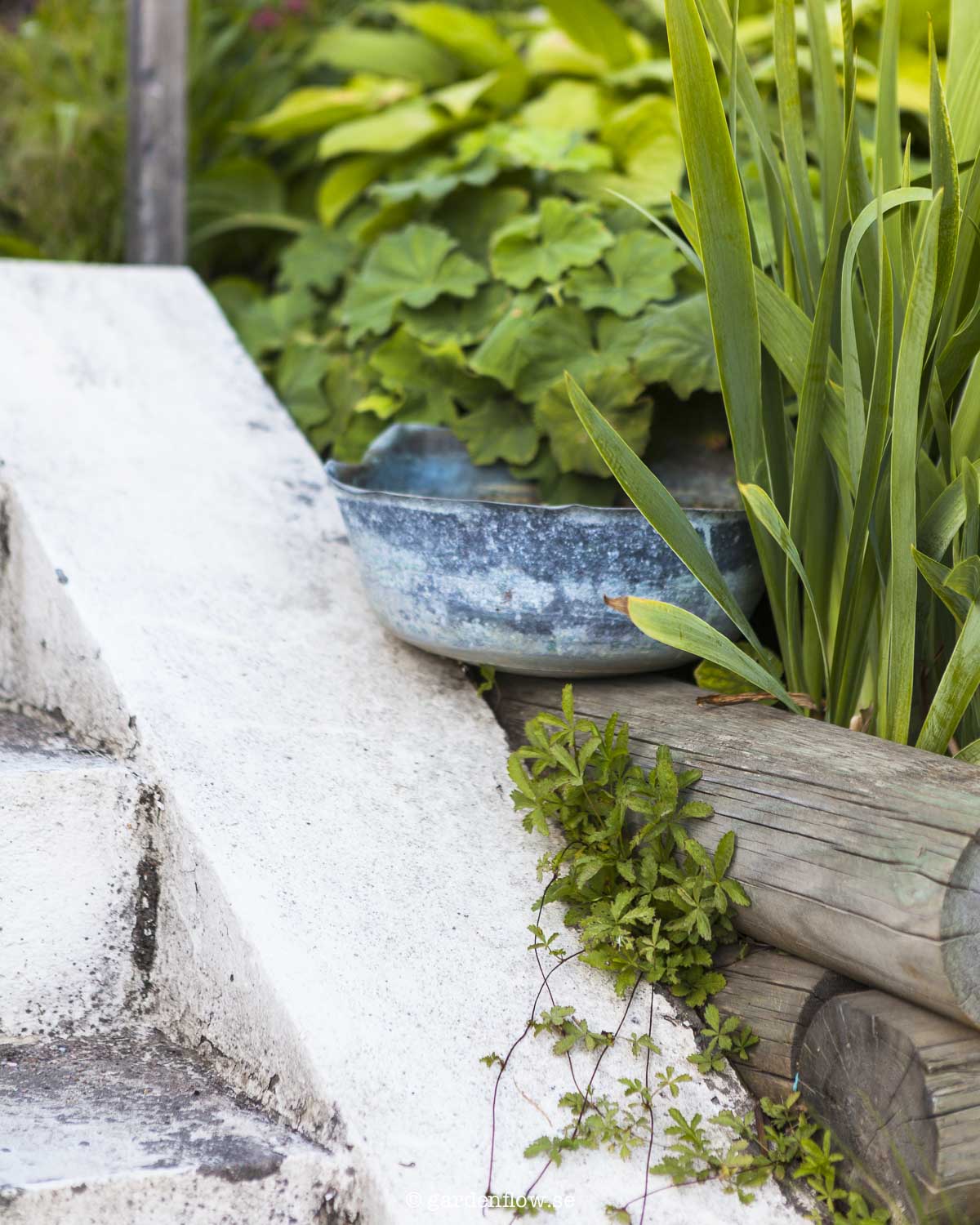 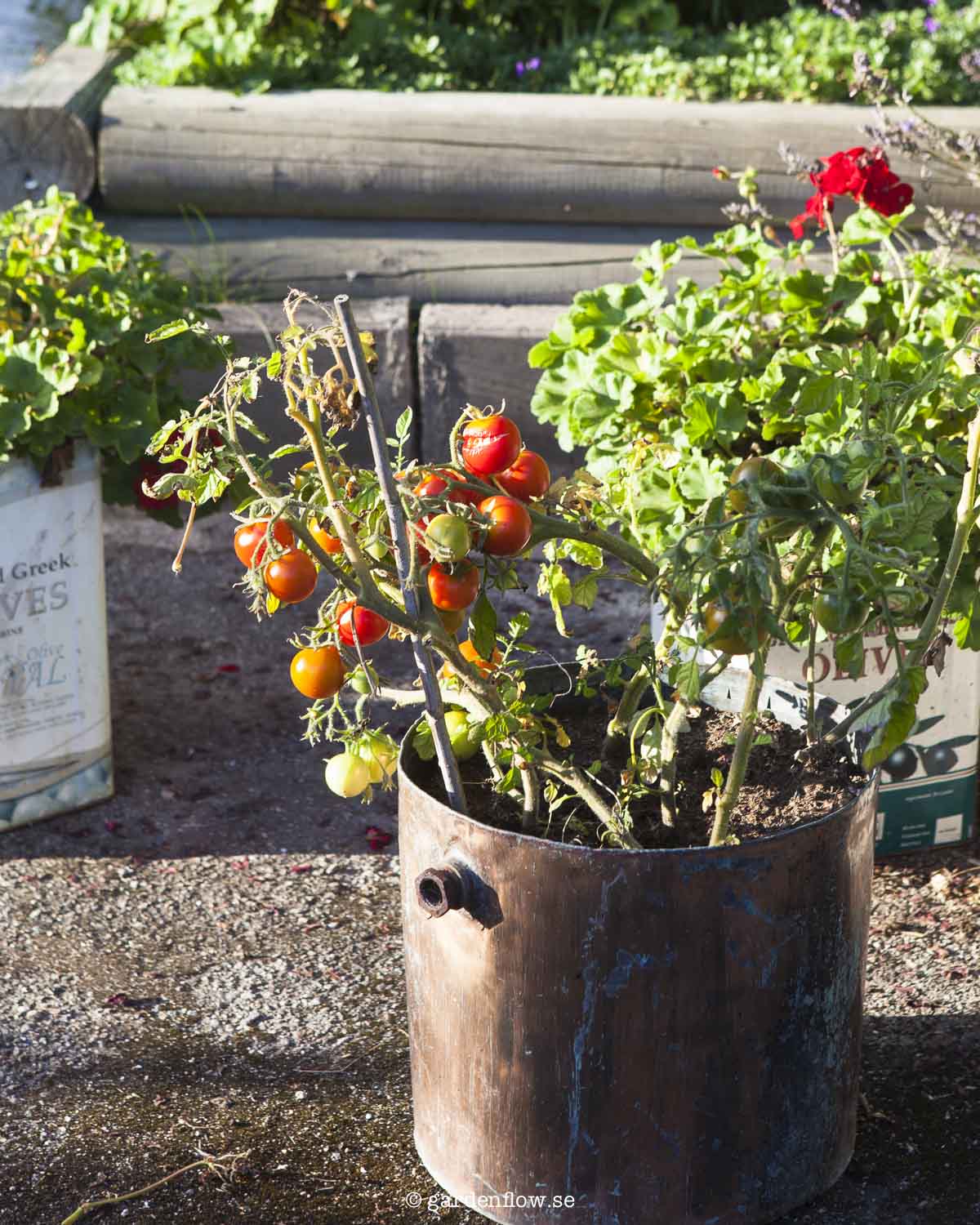 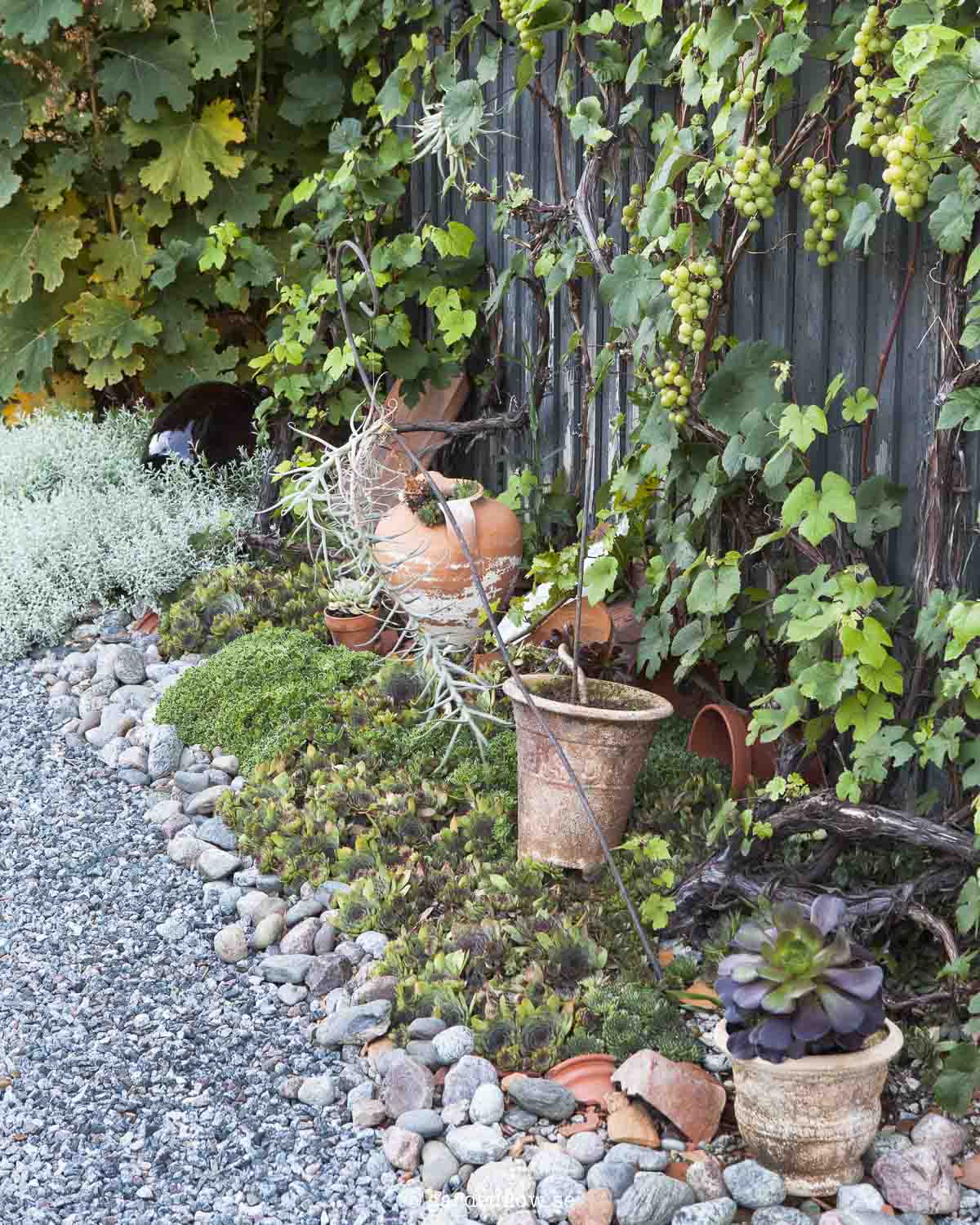 Oh yeah it is flowering

Even if the green plants are not in any way a minority it is everything that is in flower right now that stands out and wants your attention. Furthest down in a sunny spot in the garden is the dahlia bed. The dahlias are Stefan’s and right now there are over 100 pots being forced for the summer. I bet it will be just as impressive as at my visit in August last year. After parts of a hedge was removed it has become easy for people walking by to see the ocean of Dahlia flowers. The neighbours across the road, a retired couple, have a splendid view over the garden. Stefan tells how it shows that they appreciate being able to get glimpses of everything that happens through the year in the garden and there have been some visits from the elderly to have a stroll through the garden. 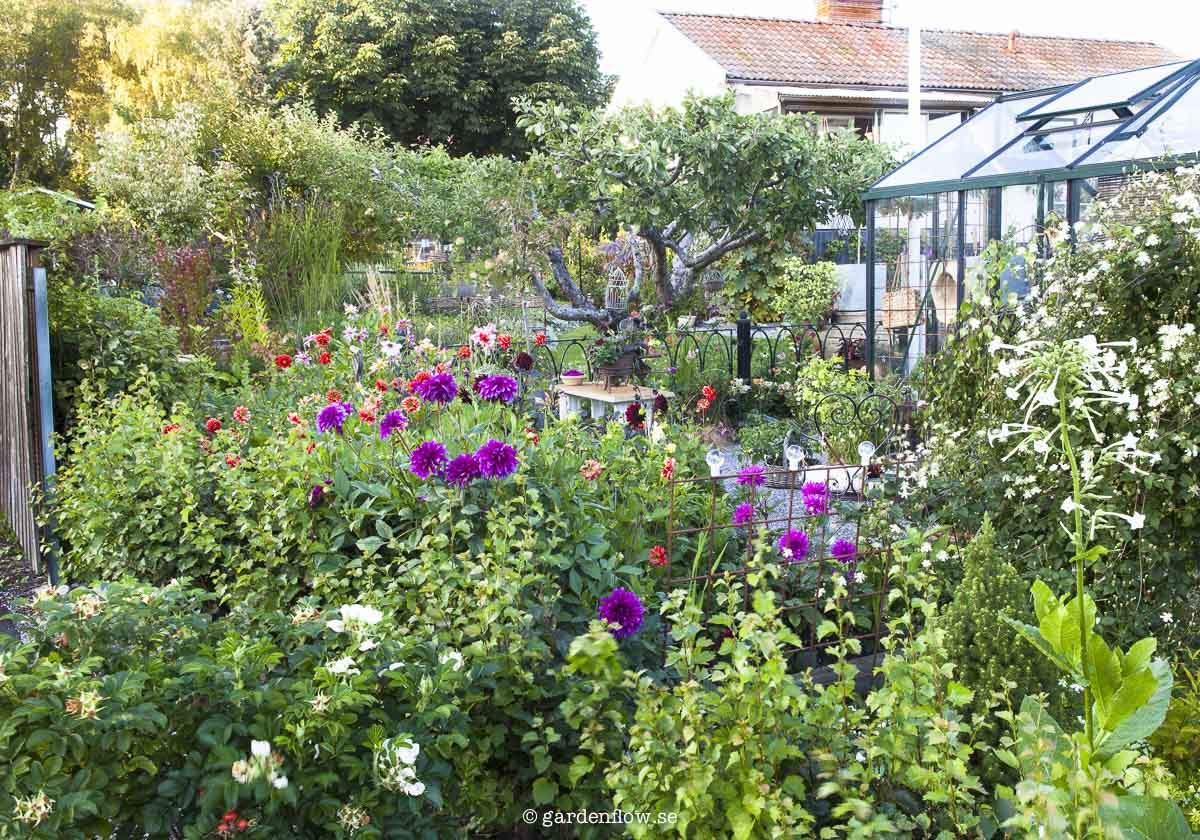 It is not only dahlias that like it here. Roses are plentiful as well. 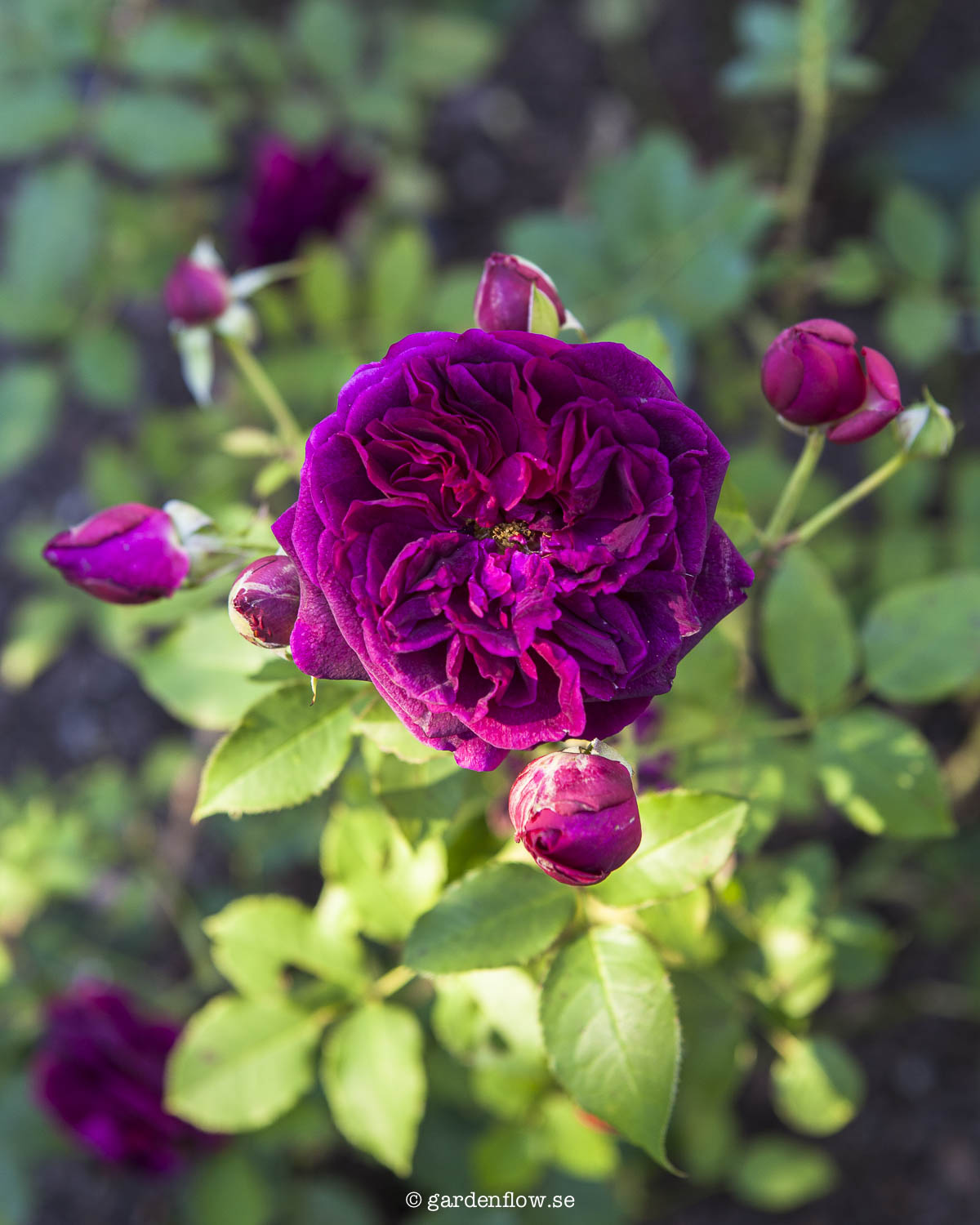 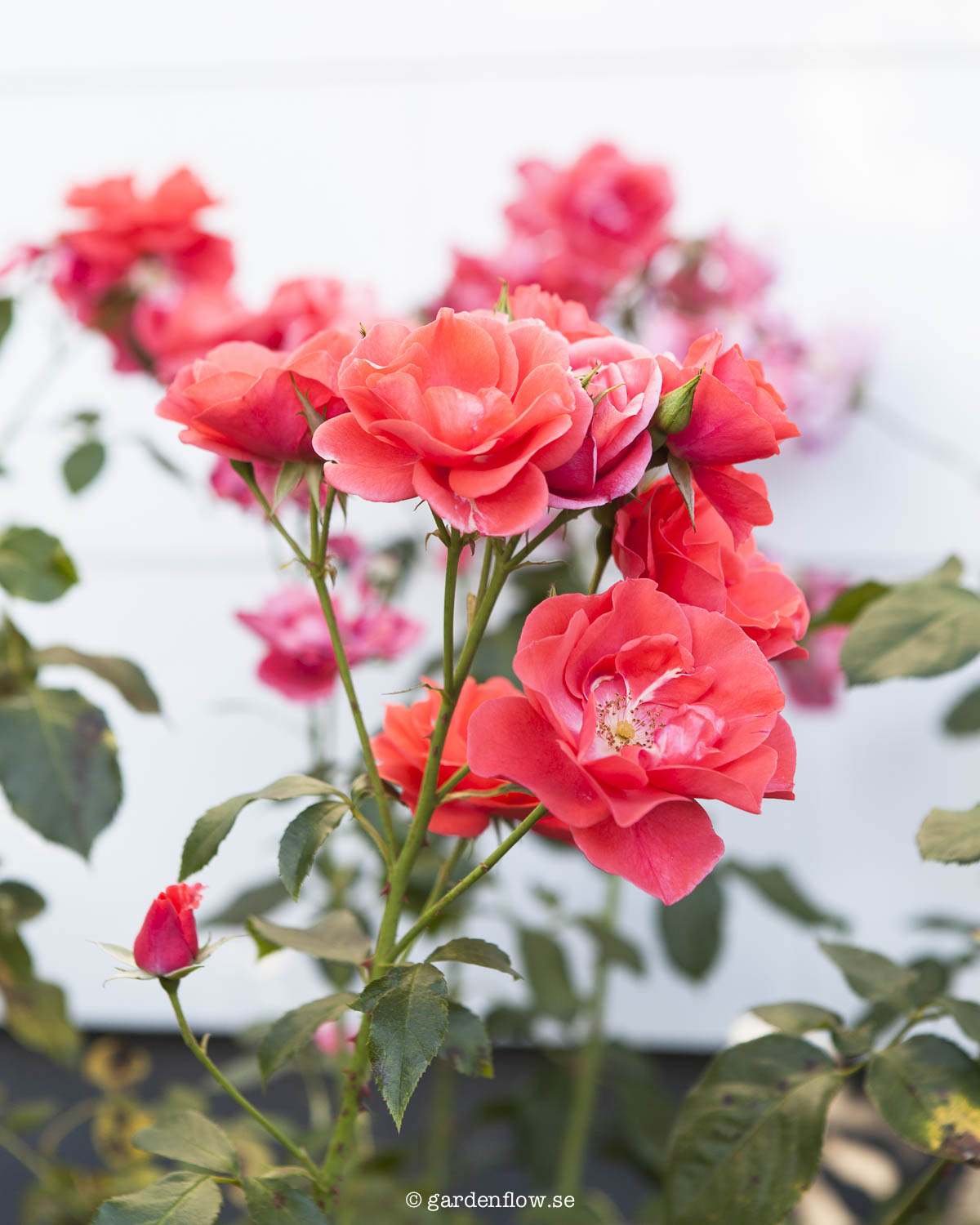 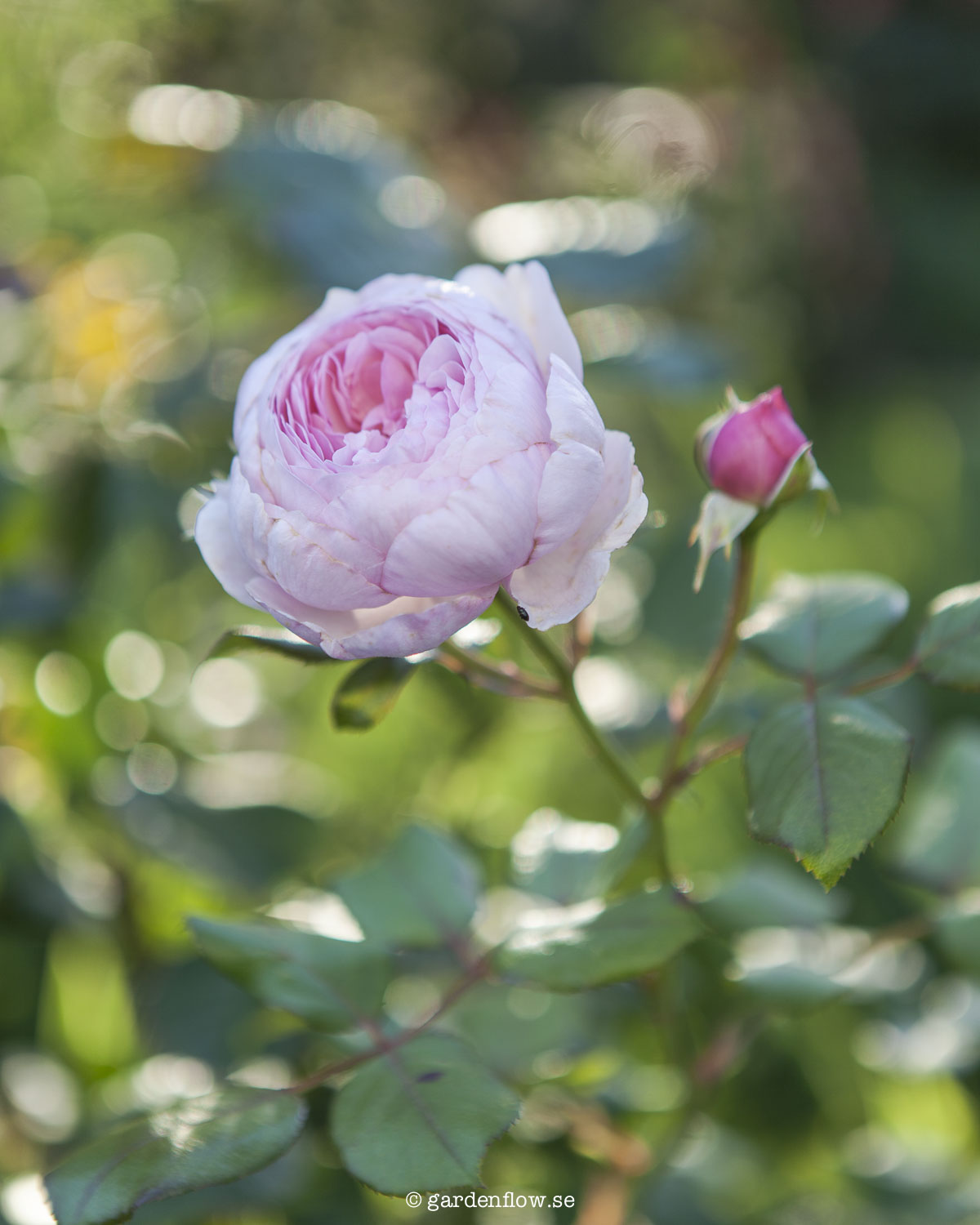 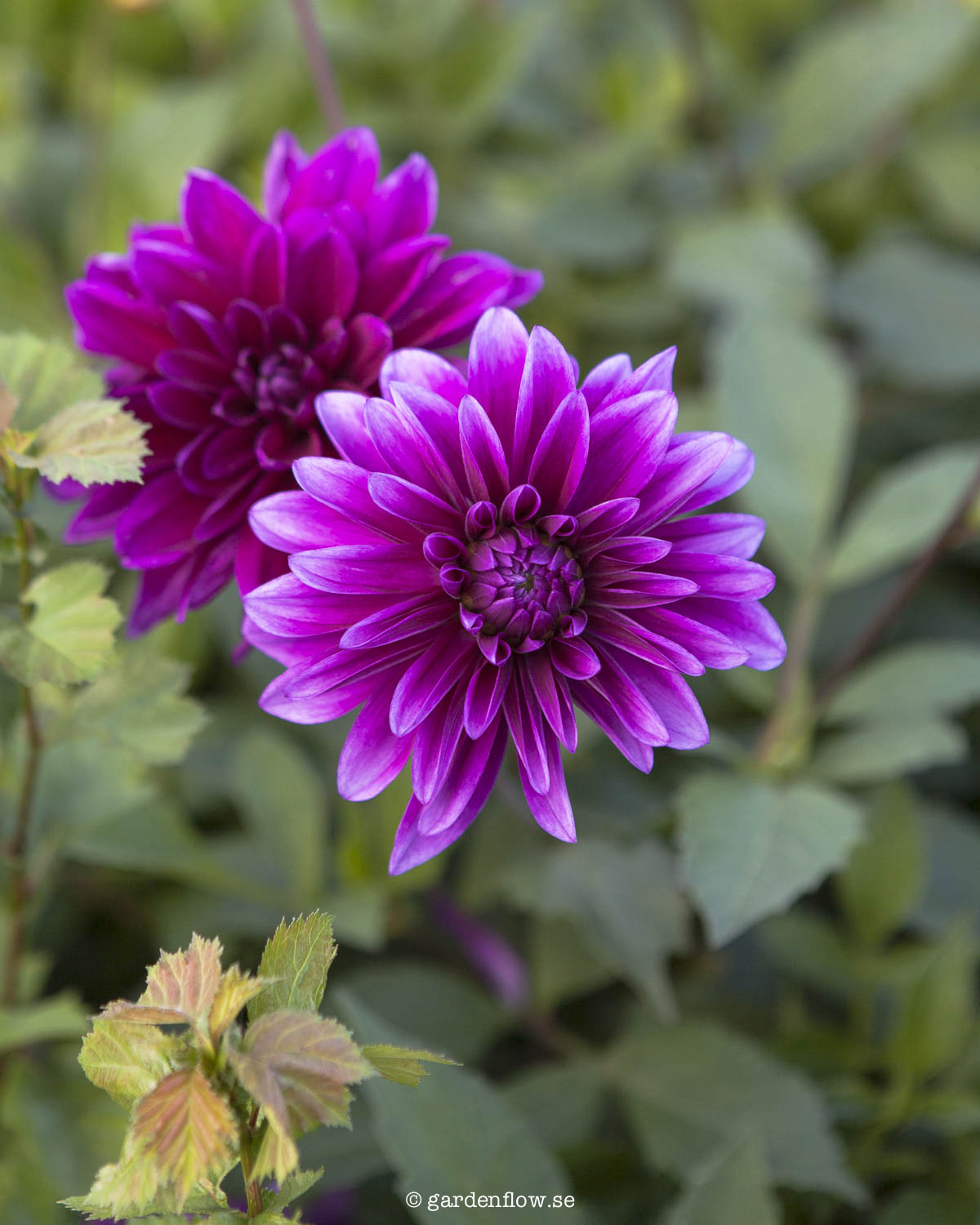 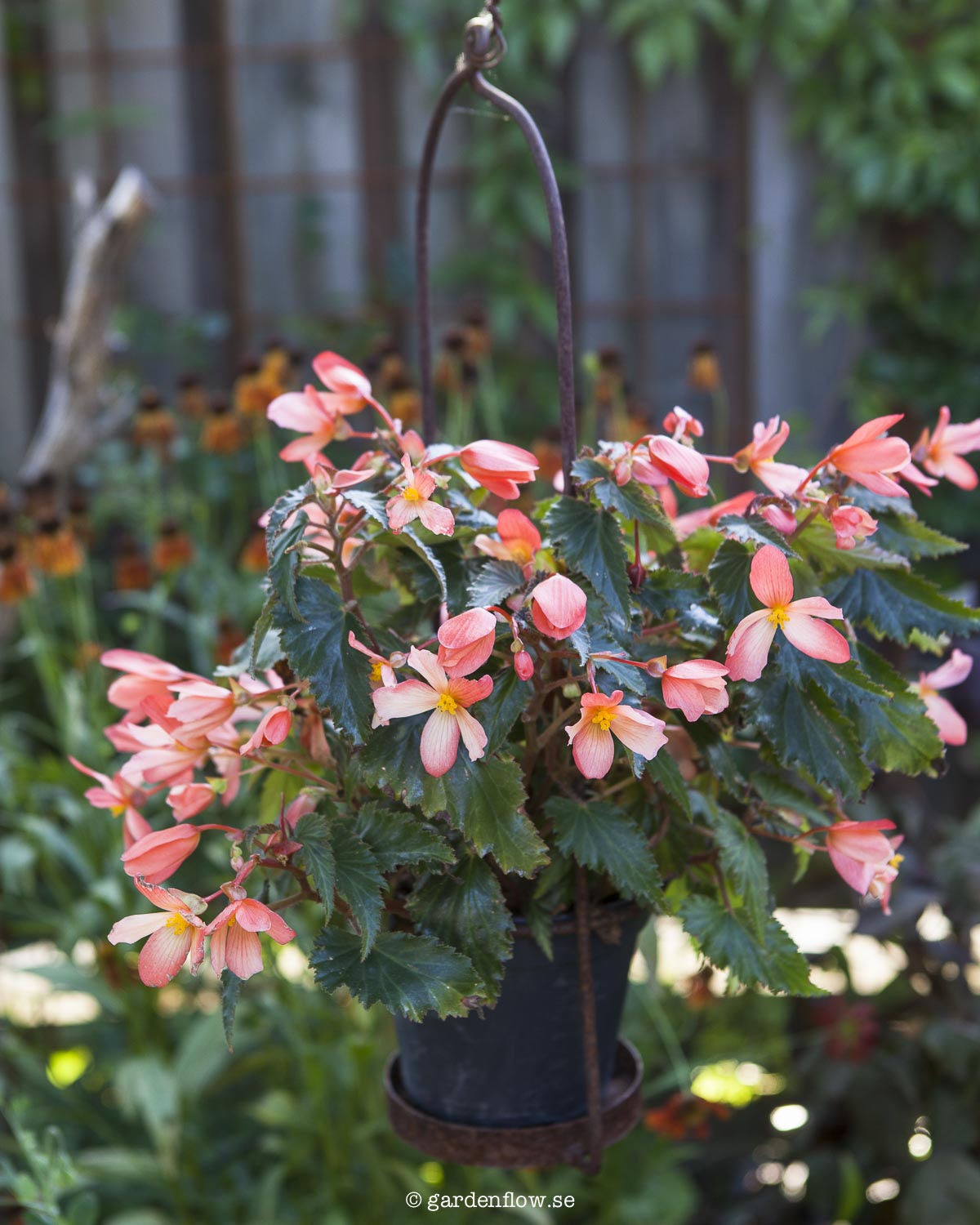 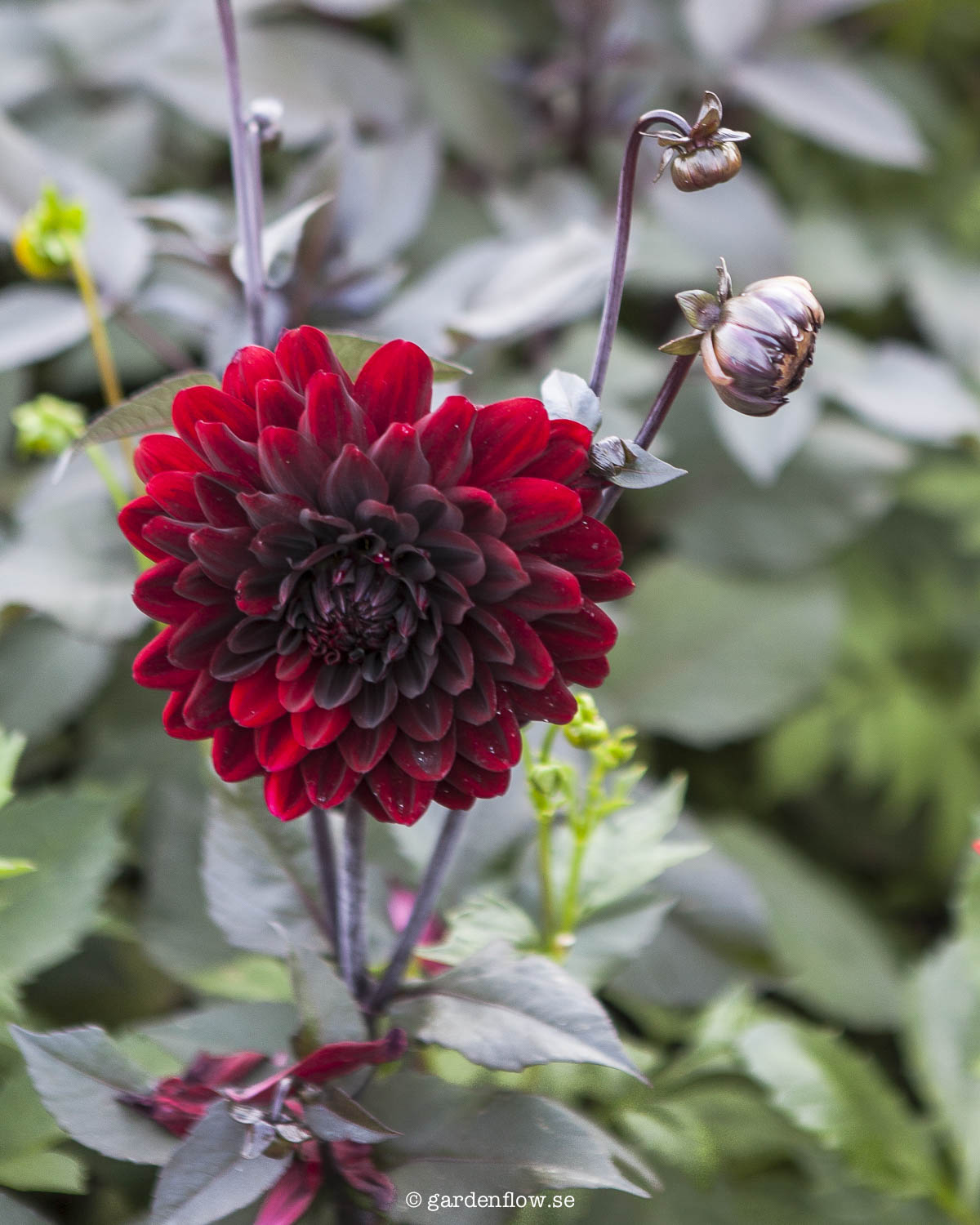 There are no limitations here.
Everything seems to fit.
Plants, ideas, dreams and people.
That is what gardens are about.

It is hard to believe, but  in the garden there are three whole houses apart from the main house, a conservatory and two greenhouses.  Also the pekin bantam chickens in one part of the garden have their own house. So in other words, five houses. There is a pond, an acidic soil planting, a piazza, a grove, a Dahlia flower bed, a Rose flower bed, a peach tree, grapes, shaded flower beds and sunny flower beds. Also a large deck with a dining area, lounge and jacuzzi. 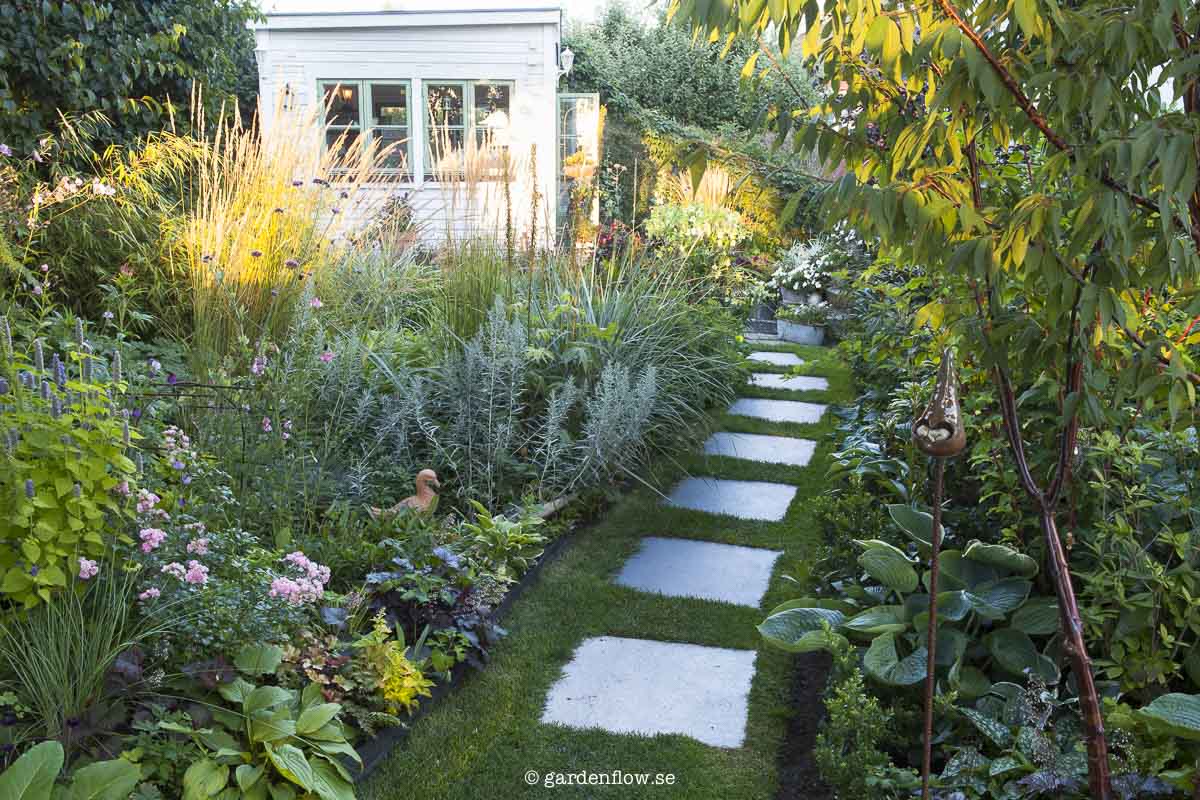 The garden both sooths and heals.

To get to dig in the soil and work in the garden with all the joy and sometimes tears it involves has been and still is crucially important to Veronica, who has fibromyalga and a history of exhaustion –’I do not know how I would have coped without the garden’ says Veronica. There are thoughts of opening a garden for people with mental health needs, not just for interested gardening ascociations. Since I know how healing it is to be in a garden I would like to share it with others who might benefit from potting plants and experiencing everything that a garden can offer. ’To be in a garden both sooths and heals’ 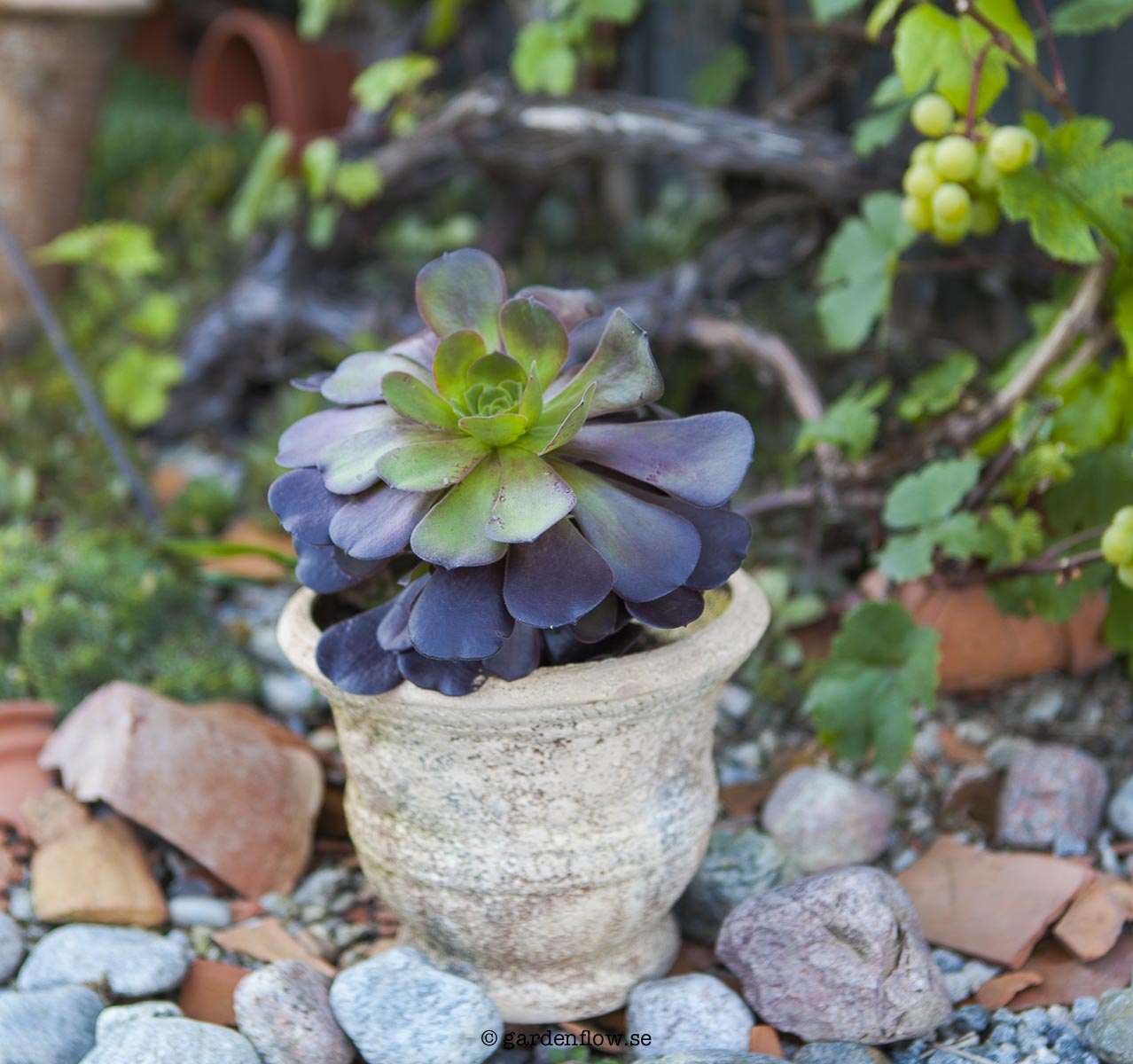 After spending a sunny evening in August at Veronica and Stefan’s garden I feel happy, energized and recharged. It easy to understand that the garden plays an important part in their lives in many ways. I fall asleep warm and not only due to the evening air. 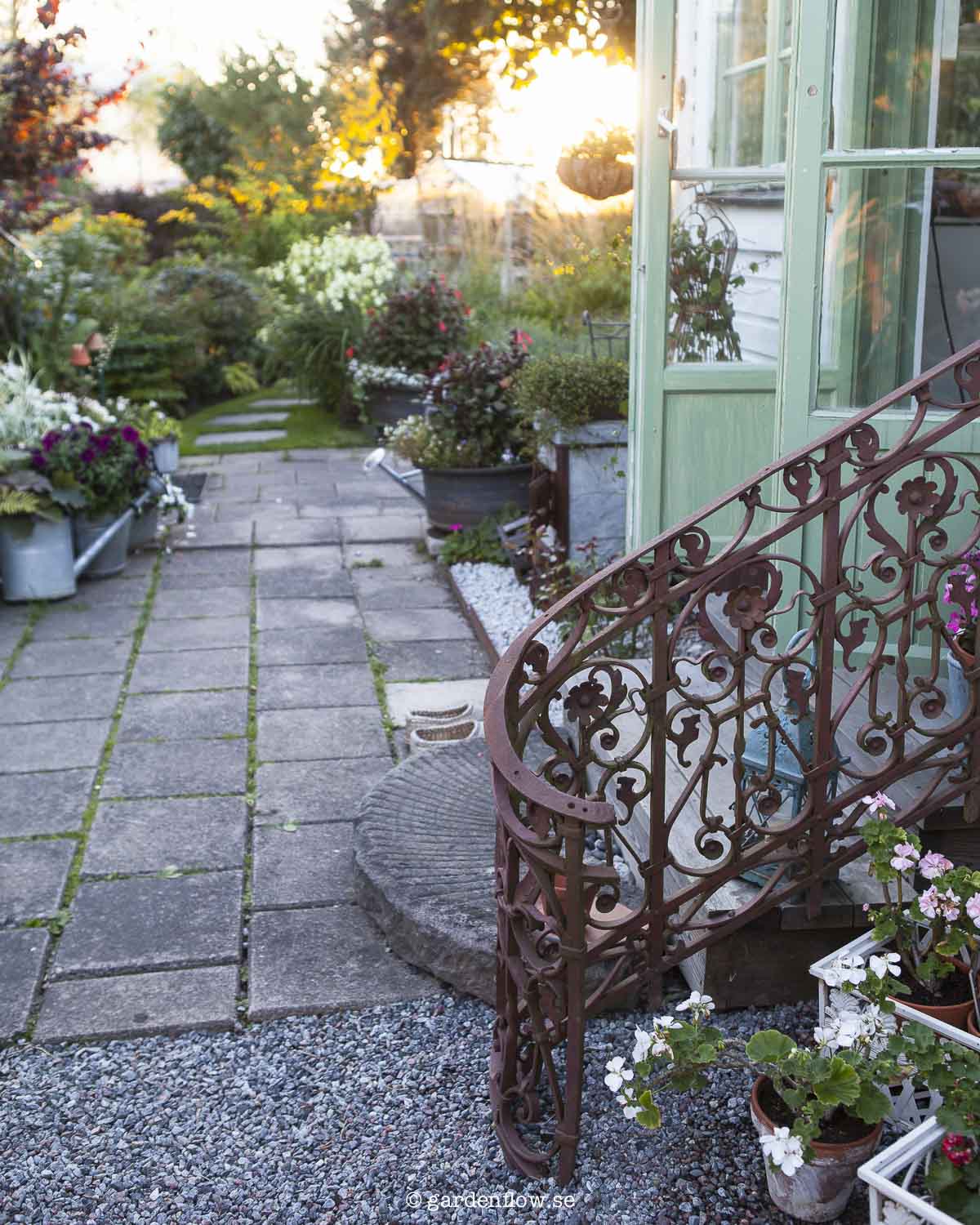 Thank you for having me dear friends!