Normally I would have got started with sowing in the greenhouse by now. I tend to start at the beginning of March with the ones that take the longest, amongst others the favourite Rudbeckia Hirta, but also a few others that vary from year to year.  This year will be different and there won’t be any sowing until the beginning of April. It is a shame to miss those weeks, but that is how it will be. On Sunday we go away for two weeks on a longed for vacation and that is why I can’t get started until we come back. In other words there will be a delayed blooming this year, I’m hoping there will be a warm autumn. 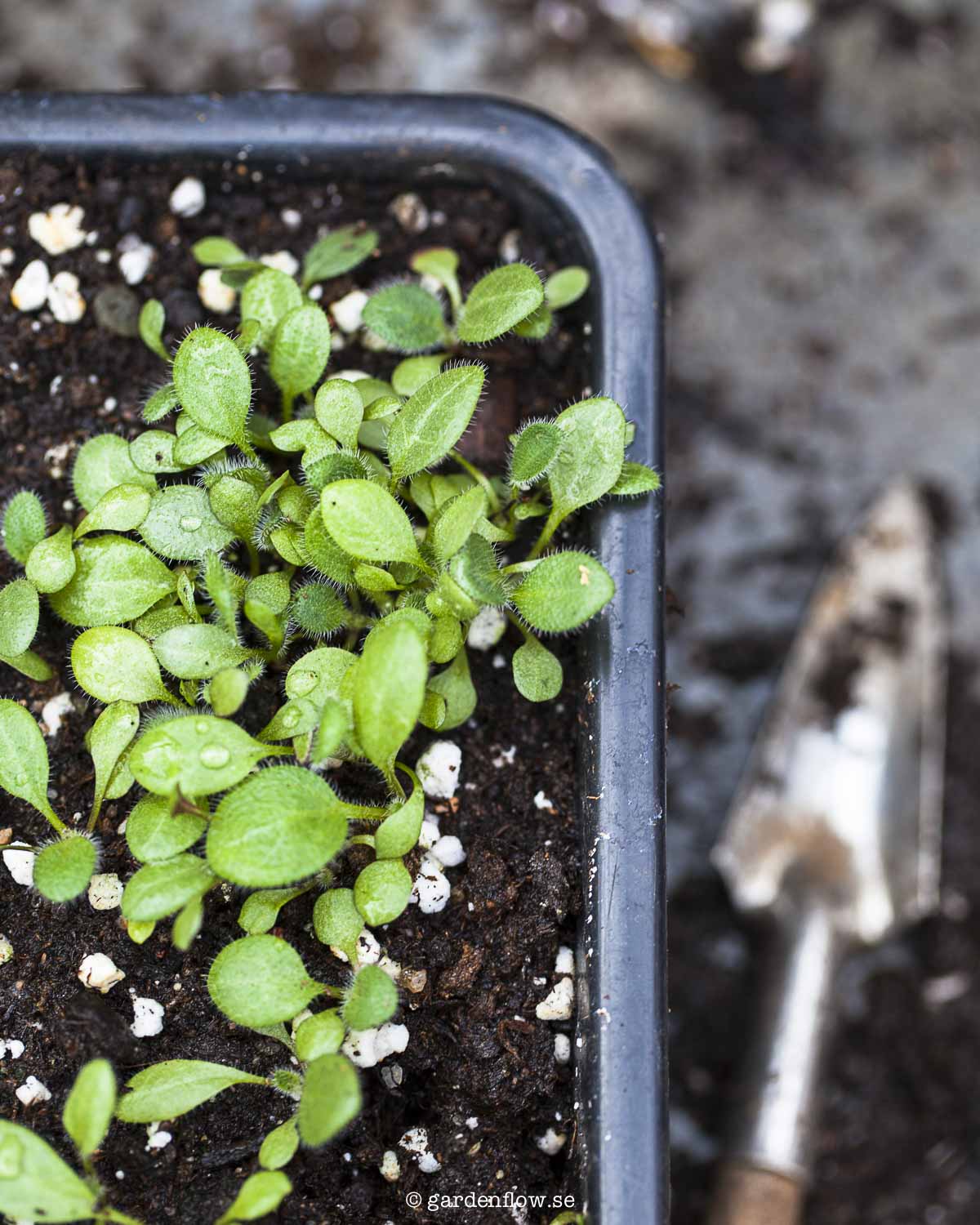 The Rudbeckia Hirta ‘Cherry Brandy’, it is time to put them into single pots with better soil. I usually use medium large plastic pots and put a few in each.

Must get a few

Terracotta is not really the best to propagate seeds in since they dry out so easily  but I have to have a few of these beauties.  Not everything has to be rational… I can accept some incongruity to have some beauty as well. 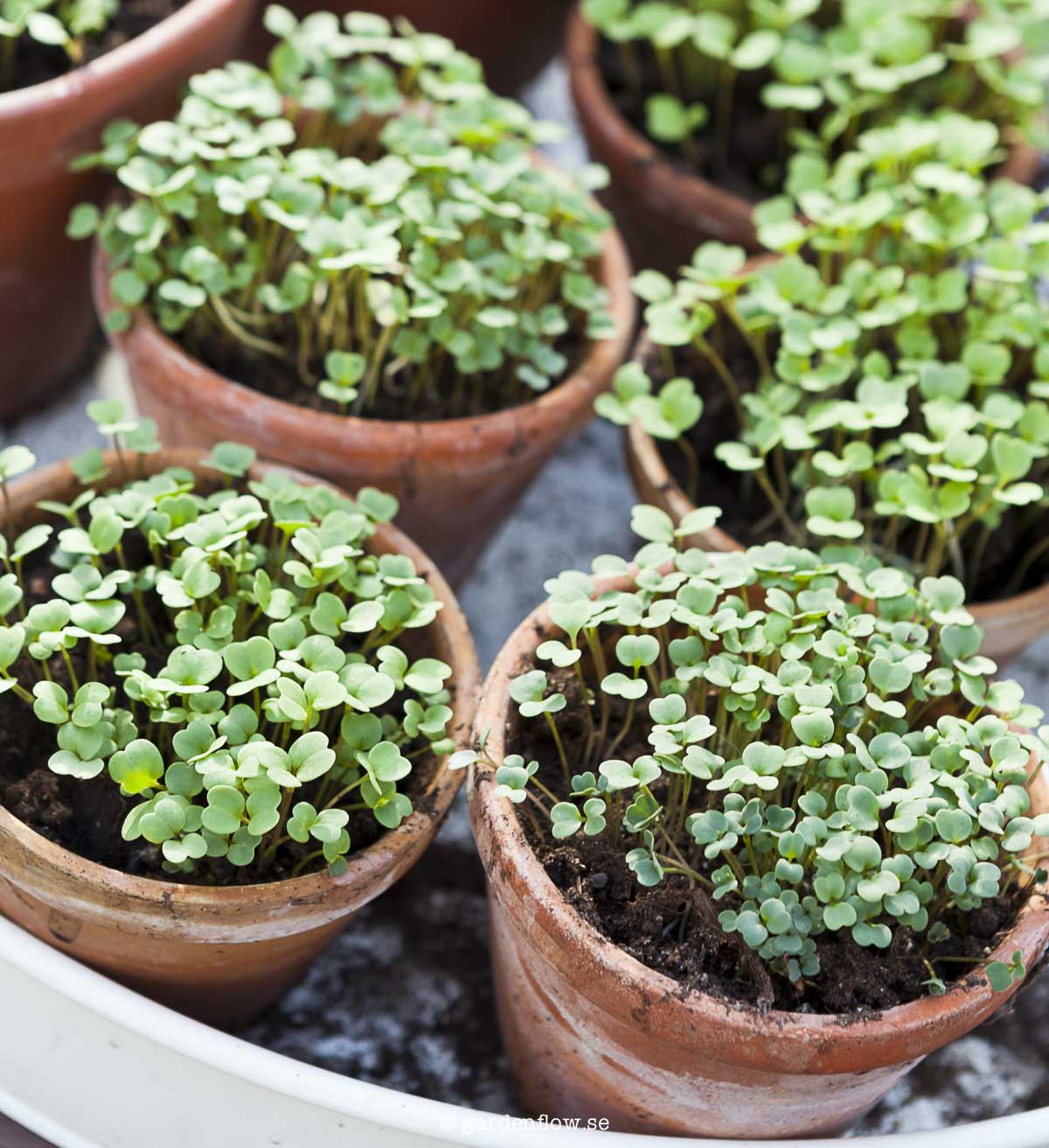 It is the same every year. Germination fascinates. Even though I don’t do any advanced sowing. You can not but get engulfed into the miracle that happens when a tiny seed becomes a flower, vegetables or any kind of plant. I use seed compost that I dilute with perlite (the small white dots) Perlite is a volcanic material that makes the soil extra porous, it lets through light but protects against the sun and evens out the temperature.  It can be used to cover light germinating seeds. For the bigger seeds that get sown later (from late April and during May) you can use normal planting soil. They are not as sensitive as the little seeds. 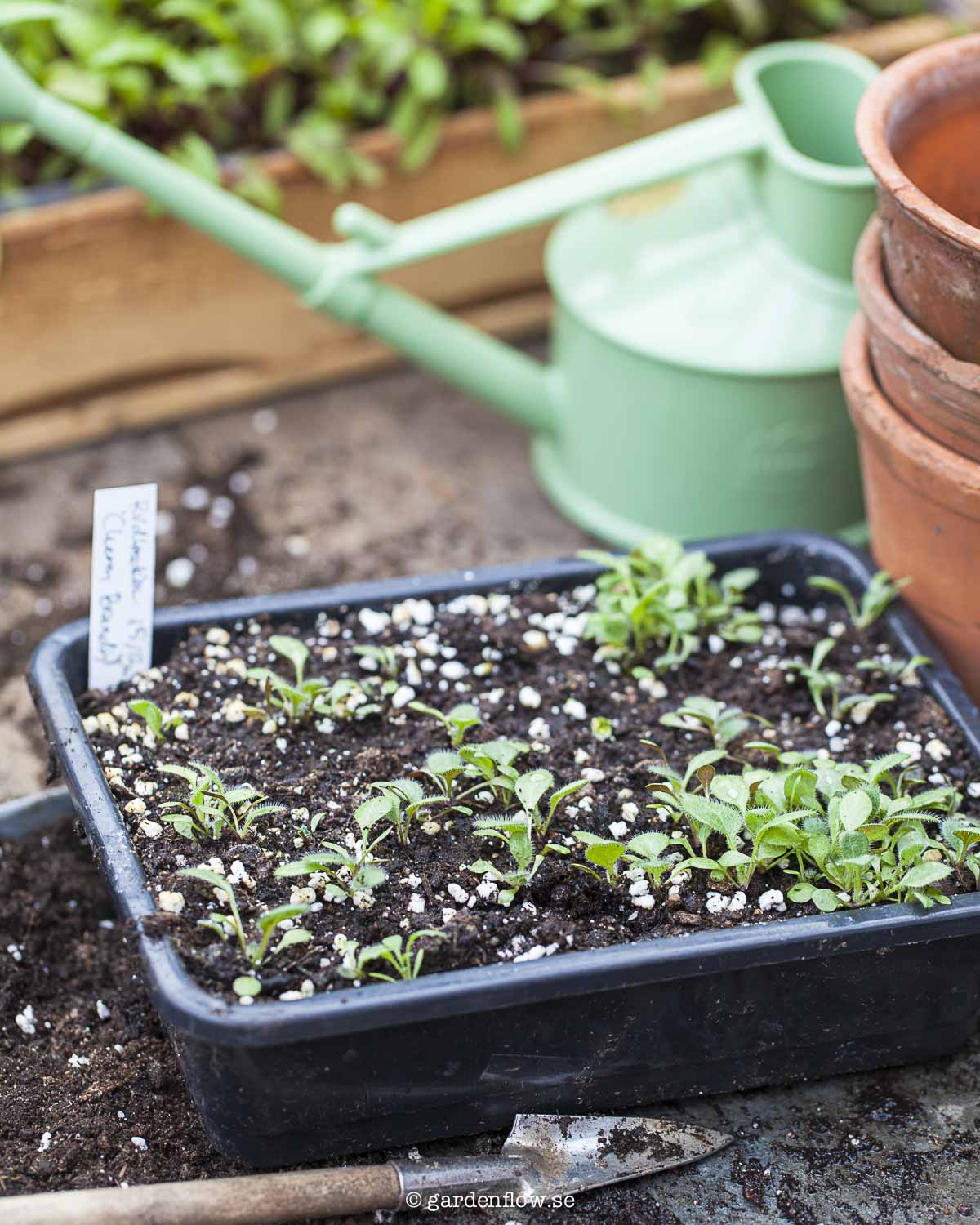 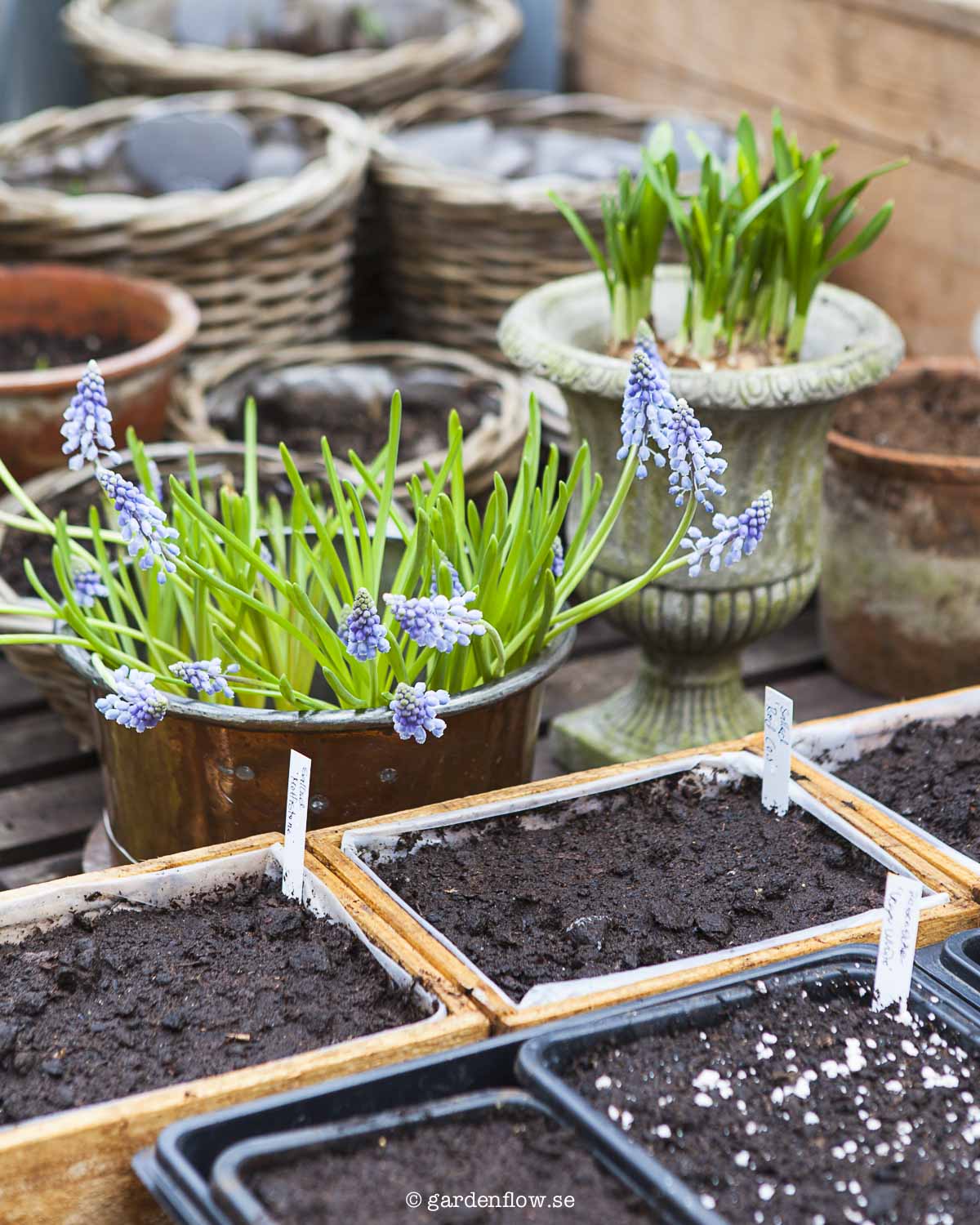 Early this and that in the greenhouse

Even if you are not a market gardener you can get young vegetables really early in the spring if you have a greenhouse with additional heat. I tend to sow different varieties of lettuce, but also beets and chard. Some of them for planting out and some to be used for lettuce. I also tend to sow an early round of sugar snaps to be able to pinch the first pods already in May. I almost forgot about the Basil. Sometimes I sow it, sometimes I buy ready pots and plant them in bigger pots. I love cabbage of all kinds but am going to take a break from having them outside, I am tired of all the attacks and don’t have the right amount of commitment right now to deal with it. It is 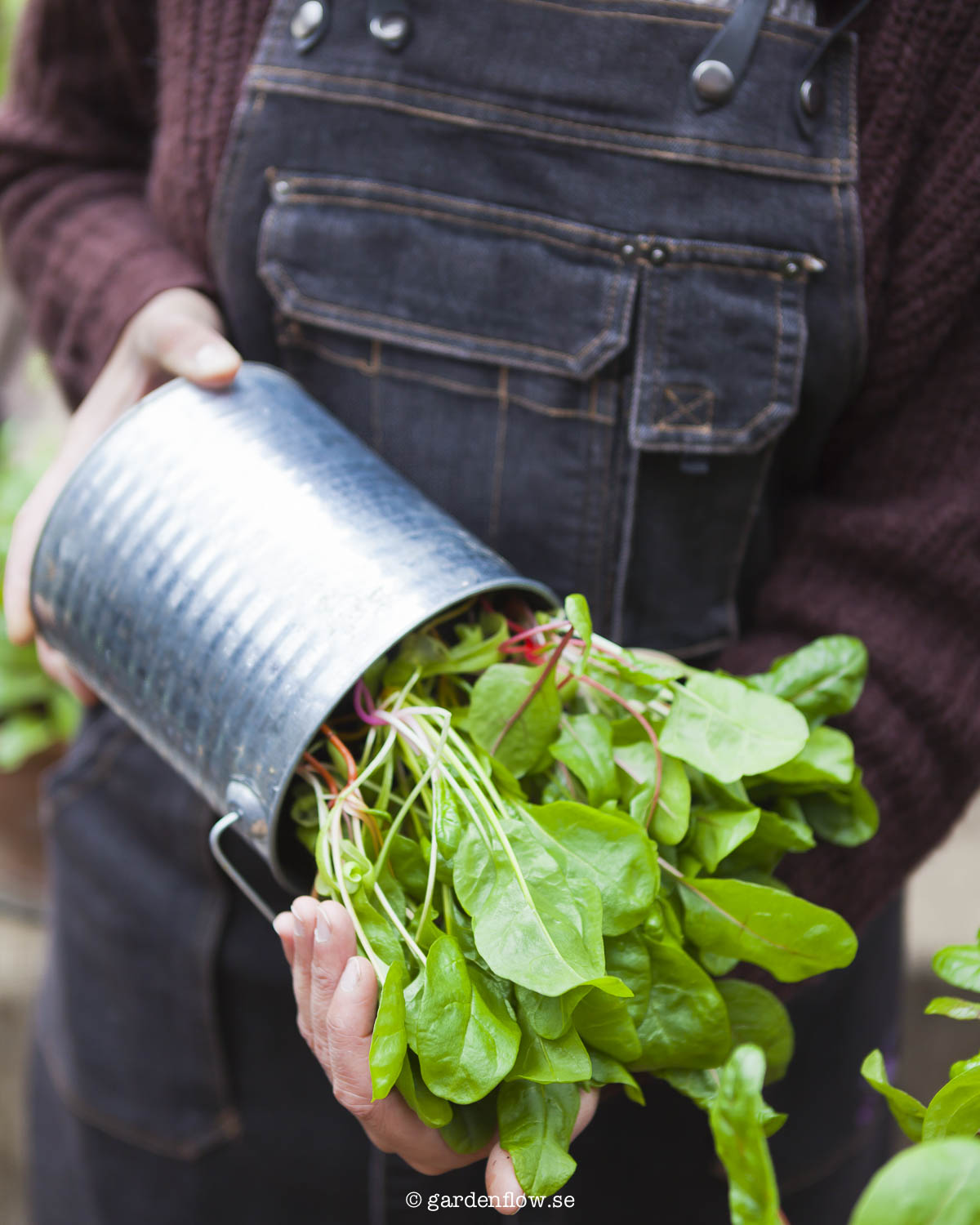 Chard for planting out and some for eating. It is time to separate the plants. I use the chard both in the flower beds and in pots. I put the ones we eat from in the planter.

Mixed varieties of lettuce is very nice to sow. I often try out new mixes every year. It does not matter much which. I try to remember to sow in batches during the spring, otherwise it is nice the crop we get. And as I mentioned earlier, you don’t have to be a big market gardener to grow something edible, a small yield is worth a lot too. 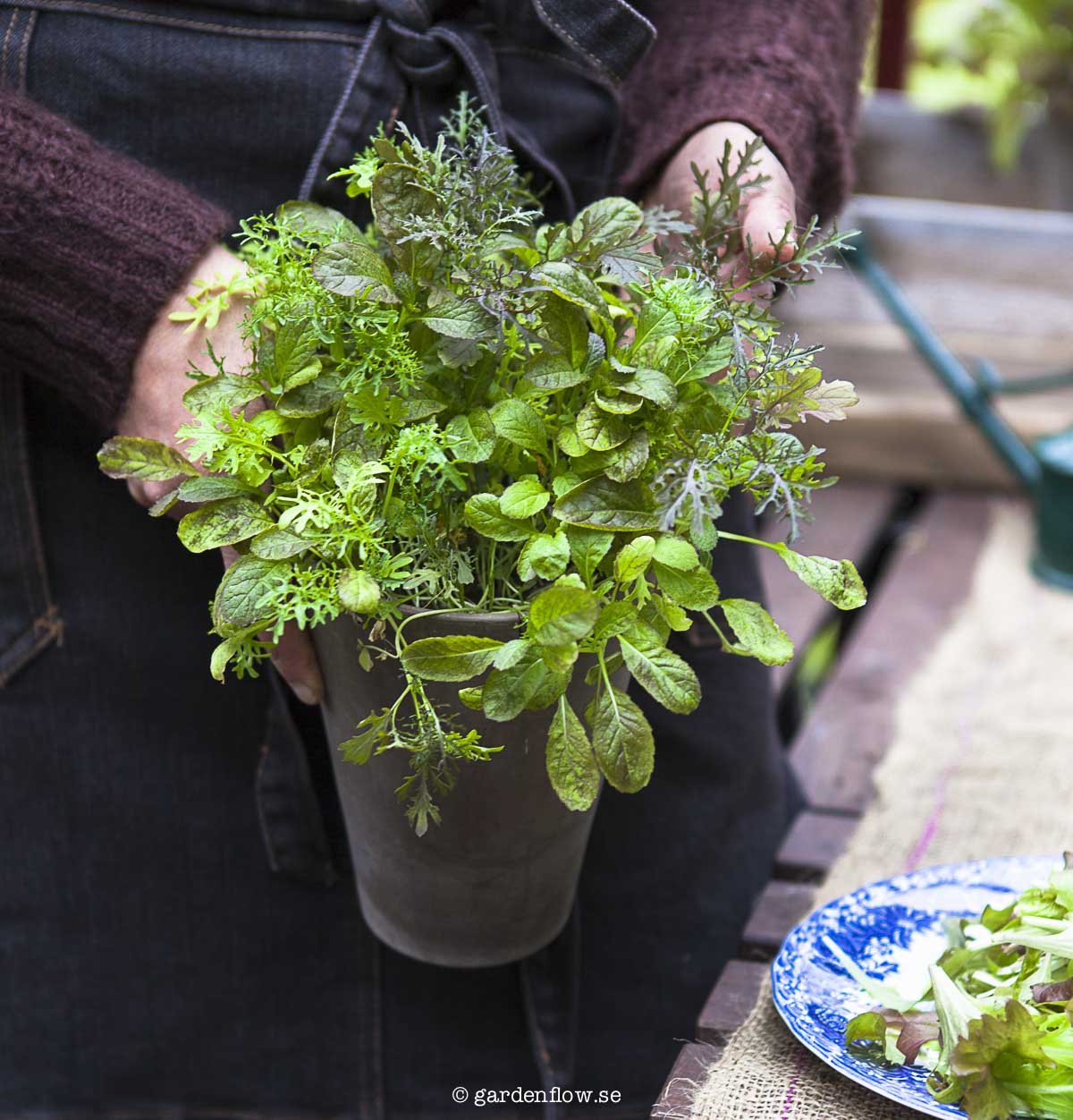 After the vacation it is time to start with the sowing.
Mostly flowers after all.
As always.