If you ask me, there is no summer without dahlias. Flower romance at it’s best. To get the flowers to bloom as early as possible it is high time to pot the tubers to start the propagating. You can wait with it, or even do it earlier. I don’t want to plant them any later than this anyway. I want the blooming to start at the latest in the middle of the summer instead of at the end. It’s a shame to look upon the dahlias as merely late summer bloomers when they can have a much longer season than that.This year it is not only the seedlings that will be later than usual, the dahlias will be as well. As soon as we are back from our trip it will be full on. 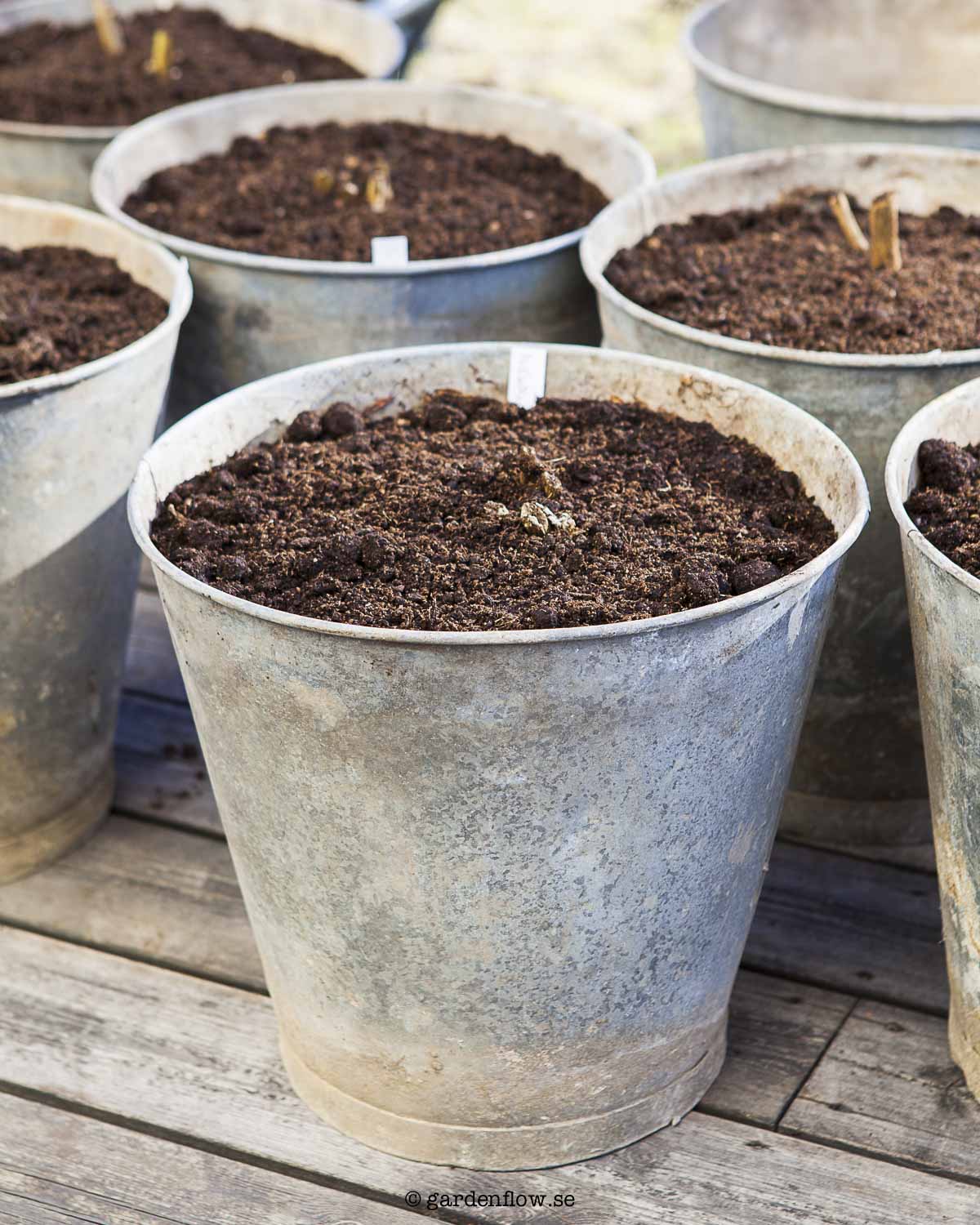 Adapt the winter storages of the tubers to your facilities.

During the winter I store my tubers in the cellar but really it is too warm there. That is why I leave most of them in their pots. The soil prevents them from drying out. The recommendation is to wash off the soil and put the tubers in paper bags or peat, sand or something similar. But this is if they are stored in a cool place ( between 0 – +9 degrees). That would not work for me. They would dry out and crumble. The important thing is to know your limitations and adapt accordingly. After the winter storage the tubers should be firm, not dry or shriveled. It is possible to rescue them even if they look shriveled- just dampen them by putting them in water. If nothing happens, well then that was probably it, but often there is still some life force left in the tuber so it might still be worth planting. 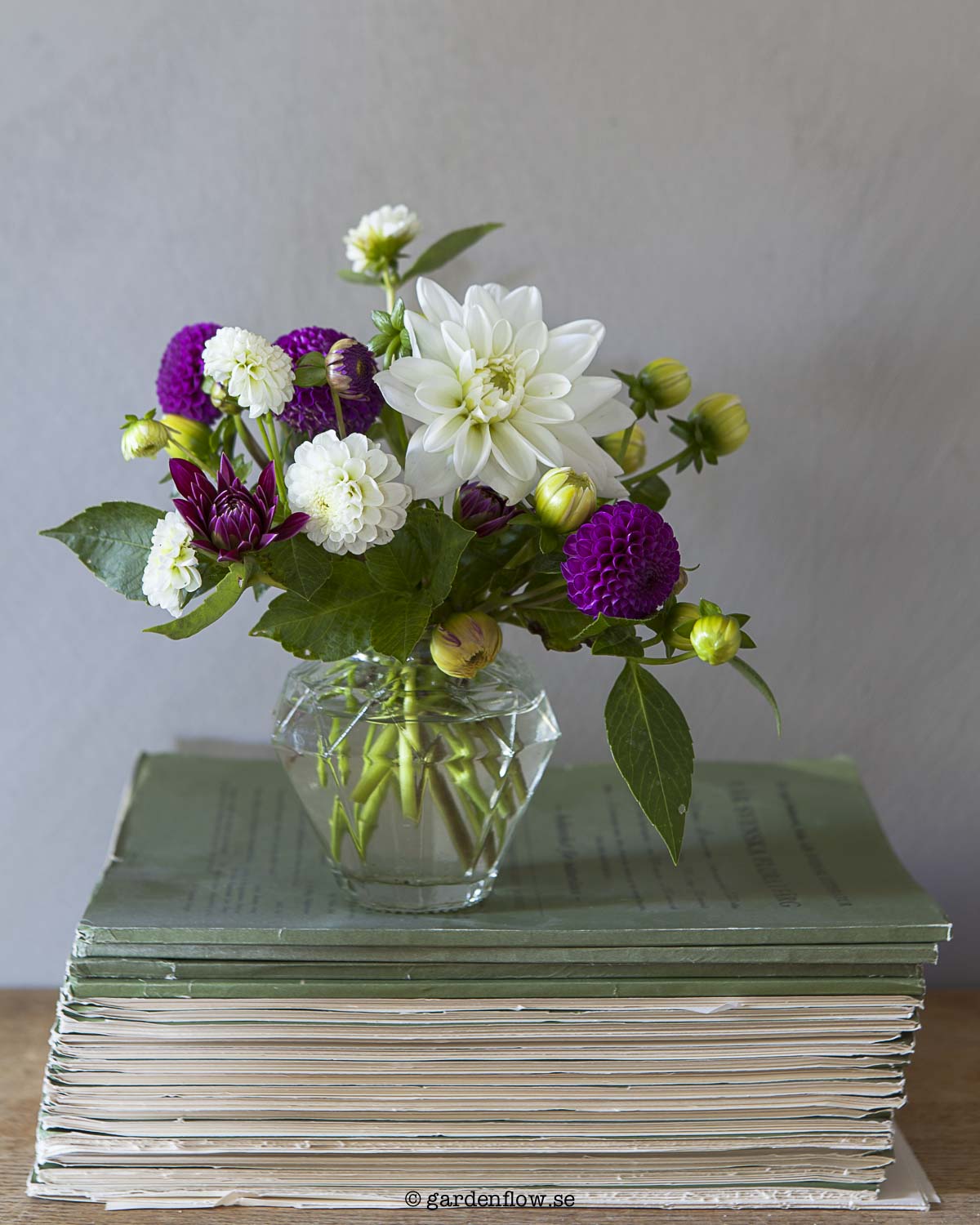 The tubers should be planted shallowly.

Plant the tubers so that the upper growing point is level or slightly above the soil. Often there will already be small shoots there, so it is easy to spot. I always change the soil in the pots every season so that they have a lot of strength to bloom. I fertilize normal organic planting soil with cow and chicken manure and mix it with whatever soil I have in the garden, compost, leaf mulch  and whatever else I have at hand to mix it with. (you can just use planting soil) Then I water all the pots thoroughly and put them into the greenhouse. They get to stay there and grow until the risk of night frost is over at the end of May or beginning of June. Sometimes I plant them out into the flowerbeds but usually I put them all in pots. The majority get fairly big pots so that they have enough growing space and are less likely to dry out too quickly in hot weather. 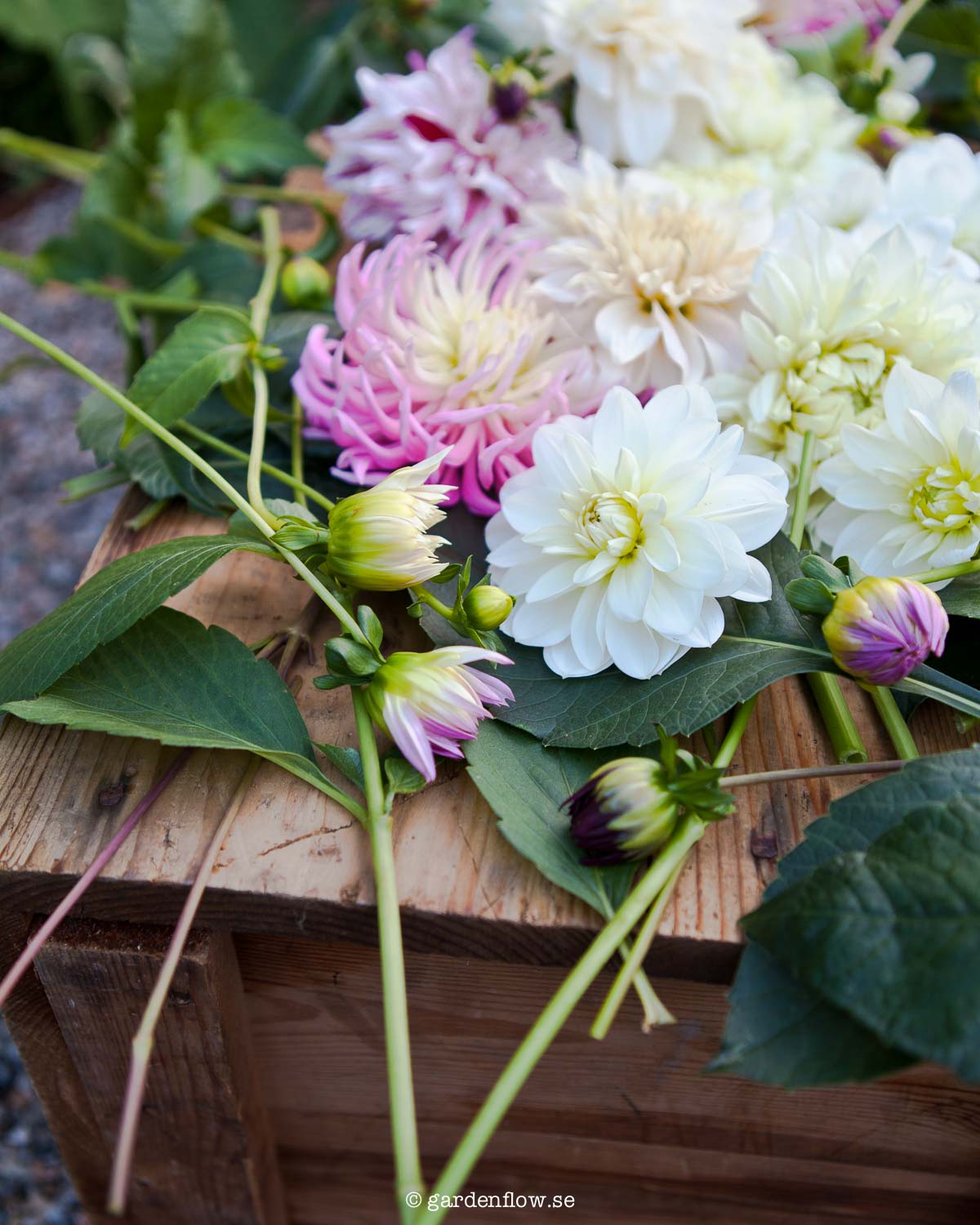 It is important to be consistent with watering.

Dahlias, especially the ones in pots, needs consistent watering for the blooming to be nice and ample. There is no room for carelessness. They grow most beautiful in a sunny location. I put my pots out in the garden and move them around when I want. Last year I found a perfect warm and sheltered spot to have dahlias together in a bigger group. More about that HERE. 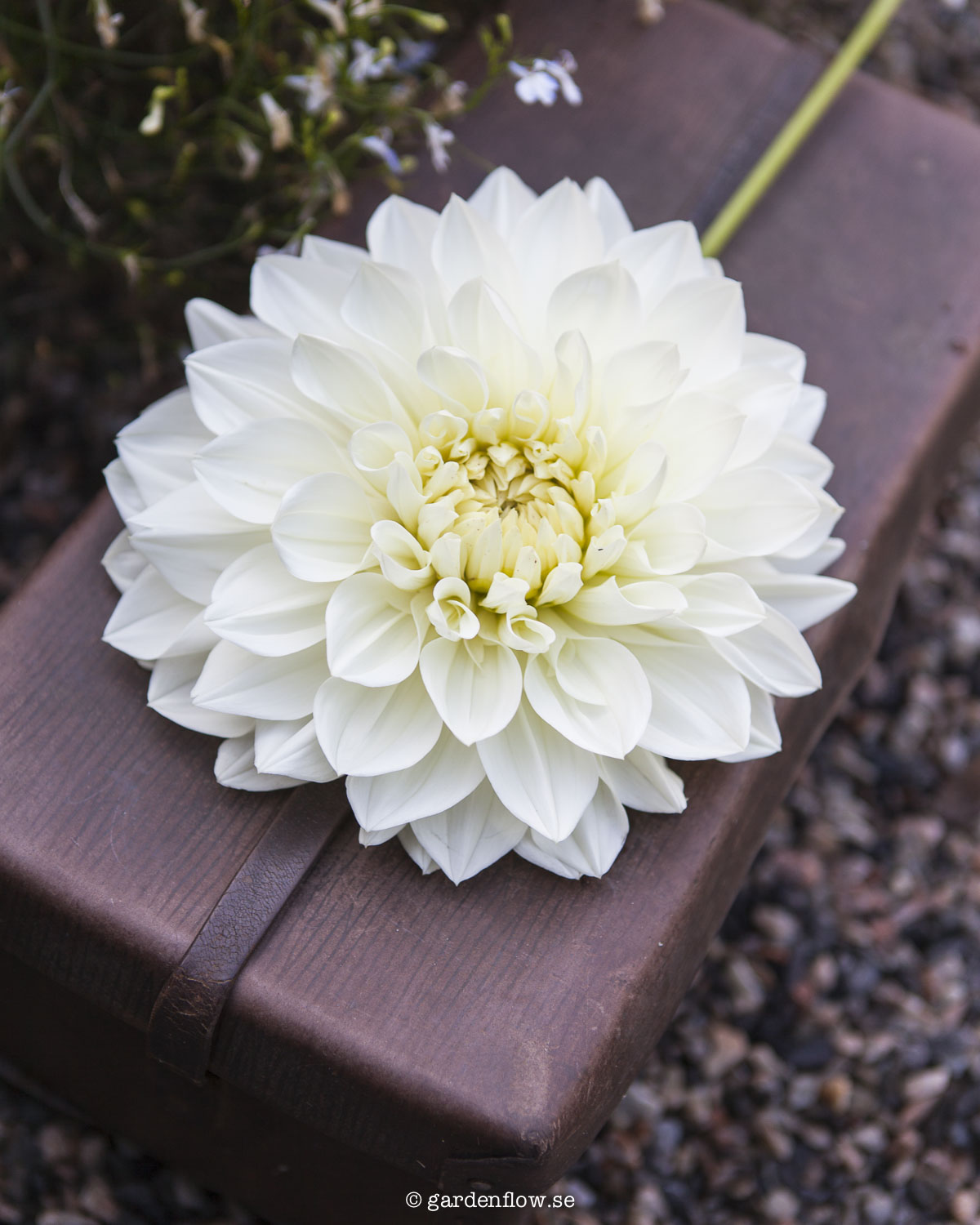 How to care for dahlias.

PRE GROWING (?): Pre grow the tubers free from frost during the spring to make them bloom earlier – I tend to pot mine at the beginning of April.
POTS: Don’t use too small pots so that the tubers have plenty of growing space. A small pot also dries out quicker. They can of course be planted out into a flower bed.
SOIL & FERTILISING: I plant my tubers into ordinary organic plant soil that I fertilise. When they have been blooming for one or two of weeks I give them liquid nutrients, with the watering about once a week.
LOCATION: Dahlias have the most ample blooming when in a sunny location.
WATERING: Consistent watering is important to ensure the dahlias bloom well.
MAINTENANCE: Snip the flowers regularly. Some dahlias need supports. One tip is to tie a piece of string round the whole plant, in many cases that is enough to ‘bond’ the stalks together. A sick poked down into the ground that the string can be tied to makes it even more stable.
WINTER STORAGE: I leave my dahlias out till the first frost arrives. It does not matter if the leaves and stalk freeze as long as the ground does not. I tend to leave most tubers in their pots over winter, but some get taken out and their soil brushed away. Those tubers I store in paper bags. All storage needs to be done frost free but not too warm.